Flipside 020: Little Malcolm (And His Struggle Against the Eunuchs)

Delusional revolutionary Malcolm Scrawdyke (a mesmerising John Hurt) leads his Party of Dynamic Erection - Wick (John McEnery), Irwin (Raymond Platt) and Nipple (David Warner) - in an enraged battle against an unseen nemesis in this chilling dark comedy. Financed by George Harrison and based on the celebrated stage play by David Halliwell, Little Malcolm was shot in wintry Oldham by director Stuart Cooper (Overlord) and cinematographer John Alcott ( A Clockwork Orange). It won the Silver Bear at the 1974 Berlin Film Festival.

More details when I get them.

Also known apparently as 'Little Malcolm and His Struggle Against the Eunuchs'... A review/report from the Flipside screening last year...
Top

Sounds interesting - John Hurt and David Warner in a film directed by Stuart Cooper and photographed by John Alcott just prior to Overlord.
Top 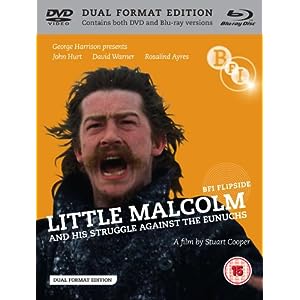 A mesmerising performance from John Hurt is at the centre of this chillingly dark comedy about delusional, Hitlerian revolutionary Malcolm Scrawdyke, leading his devoted followers Wick, Irwin and Nipple in a battle against an unseen nemesis. The film was financed by Beatle George Harrison, and is based on the play by David Halliwell that was first staged by Mike Leigh. Filmed on location in a bleak, wintry Oldham by director Stuart Cooper (Overlord; The Disappearance) and cinematographer John Alcott (2001; A Clockwork Orange).

• Dual Format Edition: includes both the Blu-ray and the DVD of the film and the extras.
• New High Definition restoration.
• Put Yourself in My Place (Francine Winham, 1974, 21 mins): Comedy starring Judy Geeson in which a husband and wife change roles.
• The Contraption (James Dearden, 1977, 8 mins): Experimental comedy short.
• llustrated booklet featuring essays, credits and biographical information.

It's a shame the BFI q&a with John Hurt (and Mike Leigh out in the audience from what I recall) isn't being included.
Top

A mesmerising and furious performance from John Hurt, as delusional revolutionary Malcolm Scrawdyke, is at the heart of this chillingly dark comedy. Rarely seen in almost 40 years, it is released by BFI Flipside in a Dual Format Edition with thematically related archival short films and an extensive booklet with essays and contributions from Stuart Cooper and Mike Le
Expelled art student Scrawdyke leads his Party of Dynamic Erection – with devoted followers Wick (John McEnery), Irwin (Raymond Platt) and Nipple (David Warner) – in an enraged battle against an unseen nemesis. Rosalind Ayres is both sensitive and ferocious as Malcolm’s would-be girlfriend Ann.

Based on the celebrated 1965 stage play by David Halliwell, Little Malcolm was filmed in 1974 on location in bleak, wintry Oldham by director Stuart Cooper (Overlord, The Disappearance) and cinematographer John Alcott (A Clockwork Orange, The Shining).

Financed by George Harrison, who had admired John Hurt’s lead performance in the play at the Garrick Theatre in 1965 (and preceding the launch of Harrison’s HandMade Films by five years), Little Malcolm was winner of the Silver Bear at the 1974 Berlin Film Festival. Music is by Stanley Myers (The Deer Hunter) with incidental music by George Harrison, and the film also features performances by Harpoon and Splinter.

Confirmed as region-free (as is the simultaneously-released Voice Over).
Top

Is this Dearden related to the other one? I find it difficult to believe that it's a common name, though I've been wrong before. Also has anyone seen this? Young Hurt is enough for me to pick this one up, but some discussion never killed.
Top

This is pretty great and well worth picking up - Hurt is fantastic. It also has one of the most intense tonal shifts i've ever seen - stunned the cinema audience into silence when I saw it.
Top

knives wrote:Is this Dearden related to the other one?

I just googled him. Yes, he's his son.
Top

The BFI have put together a trailer.
Top