The German government has let Cruise in despite his wacky "religious" beliefs, and the movie is currently shooting with a targeted release date of August 8, 2008. If, like me, you've ever said to yourself "Tom Cruise couldn't be any creepier if he were a one-eyed Nazi," here you go.
Last edited by Jeff on Thu Jun 12, 2008 2:40 pm, edited 1 time in total.
Top

Cool, but do you have any pictures from the movie?
Top

Of course, it's Tom Cruise. So he's playing a good one-eyed Nazi. I use 'a' instead of 'the' because I'm sure Europe was positively teeming with good one-eyed Nazis. (I wonder if Cruise will play a hotshot young one-eyed Nazi who doesn't meet his full potential until he teams up with a mentor and the woman of his dreams who combine to humble him and teach him to finally live up to his potential as the best one-eyed Nazi around.)

What?! Aren't most of Cruise's movies comedies anyway? I defy you to try watching Last Samurai without cracking up.
Top

For me, Cocktail will always be the crowning achievement of his almost uniformly hilarious '80s work. So much so that when Coyote Ugly came along and introduced the much-needed Cocktail meets Flashdance genre, I banged out a goofball trailer called Cockdance (the sequel to Flashcock, of coures). Maybe I shouldn't admit that.
Top 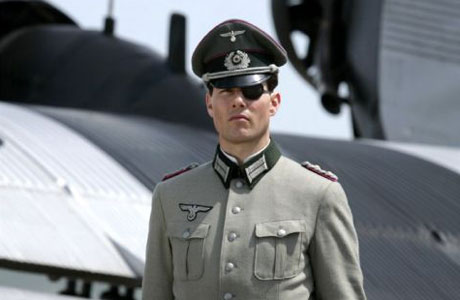 Not bad. This actually turned out a lot more interesting than I was expecting.
Top

The release date has been pushed back to October 8th.
Top

Antoine Doinel wrote:The release date has been pushed back to October 8th.

October 3rd. And it's a good thing, because this places it closer to the rest of the year's Oscar fare. You want the right people behind your movie. Summer tentpole analysts will be betting against it, while critics who enjoyed Usual Suspects and typically support these WW2 dramas will be far louder during the fall.
Top

Did I hear it right that they had to reshoot a lot of footage due to some problem with processing or such?
Top

flyonthewall2983 wrote:Did I hear it right that they had to reshoot a lot of footage due to some problem with processing or such?

Wednesday, 10.Oct 2007 -
A key scene in the Tom Cruise World War II thriller "Valkyrie" will have to be re-shot after footage was damaged in processing reports Reuters.

"Valkyrie" director Bryan Singer and United Artists had to spend months negotiating with German authorities to get permission to shoot at a key historical site in Berlin, the Bendler-Block, where Nazi Colonel Claus Schenk von Stauffenberg and his fellow conspirators plotted to kill Hitler and where they eventually were executed.

But some of the Bendler-Block footage was damaged during processing at the ARRI film lab in Munich. A UA spokesman said the damage was not extensive and the re-shoot would not have any effect on the film's production schedule or budget.

It must really suck. Pushed to February '09.

"Valkyrie," which stars Tom Cruise and is being directed by Bryan Singer, was originally scheduled to be released June 27, 2008 before the studio opted to change it an October 2008 release date.

The studio said this latest move was directed at giving the film its best possible box office opening.

"When an opening became available for President's Day Weekend, we seized the opportunity," said president of domestic distribution Clark Woods. "Moving into a big holiday weekend is the right move."

Rumor has it Cruise's German accent is in need of overdubbing. From IMDB:

The decision by MGM and United Artists to delay the release of the Tom Cruise starrer Valkyrie until next February has raised a lot of eyebrows in Hollywood. The film, directed by Bryan Singer, was originally set for release on June 27, then moved to October to place it in contention for Oscar nominations -- in particular, one for Cruise, who has been nominated three times (once for best supporting actor, twice for best actor). But the film has been plagued with nasty rumors -- in particular, one claiming that Cruise's German accent in the film is laughably bad. (He plays the leader of a plot by German generals to assassinate Hitler during World War II.) A release in February lessens the film's chances for Oscar recognition, but Clark Woods, MGM's distribution chief, told Daily Variety, "Having seen a lot of the film and how great it is going to play once it's finished, moving into a big holiday weekend is the right move." However, several movie columnists have noted that President's Day is not "a big holiday weekend" and that the studio likely slotted it into that period because the competition will be weak. In the meantime, they added, the delay would give the studio added time to reshoot scenes and allow Cruise to work with a dialect coach to perfect his accent and rerecord some of his lines.

They can't possibly be worried about accents - everyone speaks English in the trailer and in their native accents - including one thing that drives me nuts - that fake Brit-light accent. Ugh.

Anyways, this would be a hard sell as the entire story is pretty obvious and it's outcomes.

And can I ask outloud - what the hell is it with American trailers that do nothing but seemingly sum up the entire film? I've seen so many lately that just offer a 2 minute summary of the film - including the ending. Woody's "Cassandra's Dream" trailer initially had an interesting and intriguing European trailer, but the American trailer came out (after I had seen the film in Toronto) and was literally a summary of the entire film up until the very last shot - and gave everything away. Why is that?
Top

AWA wrote:Woody's "Cassandra's Dream" trailer initially had an interesting and intriguing European trailer, but the American trailer came out (after I had seen the film in Toronto) and was literally a summary of the entire film up until the very last shot - and gave everything away. Why is that?

Because no one wanted to see it.

The NY Times reports on UA and the Valkyrie delay, and apparently, there are additional scenes scheduled to be shot this summer. UA claims they had always planned to shoot these after the majority of the film had wrapped but that might just be spin at this point.


“People will be surprised. It isn’t going to be what people expect.”

I cannot wait for the Cruise jokes that will come out of this!


“People will be surprised. It isn’t going to be what people expect.”

Count Stauffenberg will come sliding into a scene on a wood floor in his socks & underwear singing into a comb about how O'Neil doesn't know shit about Murnau's Sunrise.
Top

Back to December '08
Top

I think I just came down with epilepsy.
Top

That seemed like a trailer for Mission: Impossible IV.
Top

Wait, what? You mean it WASN'T MI:IV?
Top

Barmy wrote:I think I just came down with epilepsy.

Yahoo and/or whoever's supplying them with some of their trailers have been fucking them up like that for almost a year now. Fortunately most have been coming through ok. Unfortunately some still do not. (Apple's are okay, although they don't always get the hi-def versions.)
Top
Post Reply
38 posts