Someone on AwardsWatch accused the Academy of leaking false rumors to various pundits so as to use Twitter responses as free focus groups for the ideas they officially announce, and man if that doesn't just sound dead on
Top

mfunk9786 wrote: ↑
Thu Jan 31, 2019 7:21 pm
Also in that article is a standing offer to Queen to open the telecast. Man oh man what a dumpster fire this thing is becoming

At first, I misread this as the Queen, and I was thinking why on earth would she ever want to do that? And why would they ask her to?
Top

The Academy just announced that "When a Cowboy Trades His Spurs for Wings" will be performed not by Tim Blake Nelson but by songwriters David Rawlings and Gillian Welch, and "The Place Where Lost Things Go" from Mary Poppins Returns will not be performed by Emily Blunt, but instead by "a special surprise guest" (which makes it sound like it must be Julie Andrews, except that it seems odd to decline a cameo in the film but then show up to do this).
Top

Kirkinson wrote: ↑
Fri Feb 01, 2019 7:16 pm
"The Place Where Lost Things Go" from Mary Poppins Returns will not be performed by Emily Blunt, but instead by "a special surprise guest" (which makes it sound like it must be Julie Andrews, except that it seems odd to decline a cameo in the film but then show up to do this).

Last I heard, Andrews could no longer sing due to a botched surgical procedure on her vocal cords many years ago. I'm betting it will be a current pop singer like Ariana Grande.
Top

I was under the impression that she had at least recovered a limited range of her singing voice, and the nominated song is not very musically demanding...but after looking into a bit more, I think you may be right. I looked up some videos from her “Gift of Music” tour of ten years ago and it seems to be mostly speak-singing.

I still doubt it would be someone like Ariana Grande because for demographic reasons I think they’d want to advertise her presence beforehand, though I suppose there’s still plenty of time to reveal the “surprise” between now and the broadcast.
Top

Ariana Grande is probably too big for the Oscars, though she did recently give us the theme song to this Oscar season
Top

What are the guilds smoking these days?
Top

I just don’t get it.....what are they seeing that we’re not?
Top

This post from the Awards Watch forum killed me: 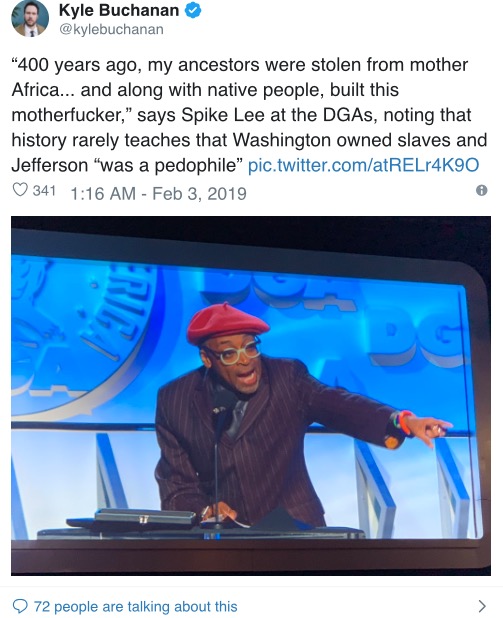 ABC is going to present Adapted Screenplay during commercial break

During a moderated discussion with The Hollywood Reporter at the Santa Barbara Film Festival on Friday, Malek addressed his relationship with Singer:

"My heart goes out to anyone who has to live through anything like what I've heard and what is out there," Malek told the audience at Santa Barbara's Arlington Theatre. "It's awful, it's remarkable that this happens, I can appreciate so much what they've been through and how difficult this must be for them. In the light of the #MeToo era that this somehow seems to exist after that, it's a horrible thing."

Pivoting to his own experience with the director, the star said he found it difficult to talk about because he didn't want to take away from the focus on Mercury and Queen, but said he doesn't "want anyone to not feel like they can share their story."

"I've sat here and talked about how everyone deserves a voice and anyone who wants to talk about what happened with Bryan deserves to have their voice heard," Malek said. "In my situation with Bryan, it was not pleasant, not at all. And that's about what I can say about it at this point."

That gif already feels like a classic and it's only a day old.
Top

Feego wrote: ↑
Sat Feb 02, 2019 12:08 am
Last I heard, Andrews could no longer sing due to a botched surgical procedure on her vocal cords many years ago. I'm betting it will be a current pop singer like Ariana Grande.

She sings on her Netflix children’s show. She lost a bit of her range from that surgery (which is bad too) but that was nearly thirty years ago so age alone has also narrowed and lowered her voice.
Top

Is that Adam McKay next to Cuaron and Farrelly?
Top

Because a little film called Roma is in his way and this masterpiece is every bit deserving of it's success.
Top

Yes. He is often shown reclining because he has a rare tremor condition that is abated by pressure being applied in certain areas of his back
Top
Post Reply
966 posts