Discuss DVDs and Blu-rays released from Arrow and the films on them.
Forum rules
Post Reply
28 posts
Message
Author 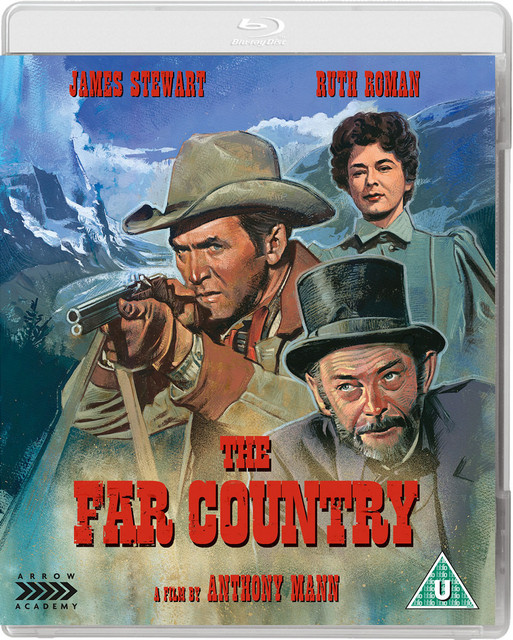 An archetypal example of its genre, The Far Country is one of five superb westerns the screen legend James Stewart (Vertigo, Man of the West) made with acclaimed Hollywood auteur Anthony Mann (El Cid, The Man from Laramie).

Mann’s film tells of Jeff Webster (Stewart) and his sidekick Ben Tatum (Walter Brennen, My Darling Clementine): two stoic adventures driving cattle to market from Wyoming to Canada who come to logger heads with a corrupt judge (John McIntire, Psycho) and his henchmen. Ruth Romain (Strangers on a Train) plays a sultry saloon keeper who falls for Stewart, teaming up with him to take on the errant lawman.

An epic saga set during the heady times of the Klondike Gold Rush, The Far Country captures the scenic grandeur of northern Canada’s icy glaciers and snow-swept mountains in vivid Technicolor. Mann’s direction expertly steers the film to an unorthodox, yet thrilling ‘all guns-blazing’ finale, whilst the imposing landscape takes on a whole new splendour in High Definition.

I was already excited for this one, but with those new special features this release looks fantastic. Can't wait!
Top

Funnily enough, I believe Universal’s first DVD release of this was open matte 1.33, so there will now be three circulating aspect ratios— can’t imagine why anyone would want Universal’s much-loathed 2:1 if you can get the 1.85 instead, but whatevs
Top

Furmanek's documentation states it's supposed to be 2.00.
Top

I can't speak for the conditions of the shoot of the film elements but that doesn't look very good to me.
Top

It looks like a big improvement over the dvd to me. I'm not sure you can get it looking any better.
Top

Yeah it looks pretty good to me, what’s the complaint exactly?
Top

It really doesn't look sharp at all to me.
Top

That's because Universal's HD masters usually are digitally over-processed. I don't know how many accurately represents the original looks.
Here, I hope the booklet technical details will clear what are these "original film elements" Arrow used, but it's so coarse and smooth, you'd think they used a 4th generation theatrical print.
Top

If that's the case, I wonder what happened because I can't recall having ever seen an OCN-sourced restoration being unfiltered and looking that devoid of high-frequencies.
Top

I sure hope this looks better in motion, because it barely looks HD on the screencaps.
Top

Hopefully capsaholic will provide some screen grabs of their own since Gary's captures have historically been problematic but I honestly was expecting more as well.
Top

It's from the OCN according to the notes and after watching it I'd have to say that's just how the film looks and domino's right that it does reflect the same look other Technicolor Universal films of the time had. In motion it looks fine, I wouldn't say it has been filtered (not excessively at least) and grain is there, but it's certainly not the sharpest looking image (and scenes can vary between one another) and I honestly think it comes down to source and still better than DVD. But man, there are some really dupey looking shots, usually between transitions.
Top

I saw prints of most of the Mann/Stewart westerns a few months ago, and while I don't remember The Far Country being especially striking, print-wise, Bend of the River was one of the most beautiful prints I've ever seen, so it does seem odd to me that another Universal Technicolor shot in similar settings that came out a year before Far Country would look distinctly better than those screen-caps, if the scan is from the OCN... Could it come down to the cinematographer?

The caps from Bend look better on the whole: http://www.dvdbeaver.com/film6/blu-ray_ ... lu-ray.htm
Though I haven't seen the disc in person, as I've been hoping it would get a better, dual-layered release from a UK label...

There are more caps in the be.com review too.
Top

Did you all see Gary's mention that Arrow sent him a note directly about the transfer?


Arrow has sent us this message: "The Far Country was exclusively restored by Arrow Films and is presented in both original aspect ratios of 2.00:1 and 1.85:1 with mono sound. The original 35mm camera negative was scanned in 4K resolution at NBC Universal's Studio Post facility. The film was graded and restored at Silver Salt Restoration, London.

The original 35mm negative had undergone serious deterioration, resulting in excessive density fluctuation throughout all the reels, affecting colour and detail throughout the film. Unfortunately no other suitable pre-print elements had been kept, so extensive work was undertaken to reduce the damage while retaining the original film grain and image detail. Previous DVD releases of The Far Country had also used this source element but the effect of the film damage was reduced by Universal's standard application of noise/grain reduction, as well as the work being completed in the lower SD resolution.

The original mono mix was remastered from the optical negatives at Deluxe Audio Services, Hollywood.

All original materials supplied for this restoration were made available by NBC Universal."

It adds up. The restoration looks sort of like it's capturing some sort of artistic intent from the period - a thick, painterly landscape look - and sort of like there were problems with the film elements?
Top

Is Arrow one of his patreons?
Top

This note looks like what is simply written in the technical details of the booklet.
Top

I have the booklet with me and the second paragraph is not in the technical notes.
Top

And indeed it isn't... though I don't think it explains the final result.
I had a quick look at it, and it's, well, somewhere being completely out-of-focus for 95% of the time and just simply awful for a new 4K restoration from an OCN. I'm not sure how this is physically possible in a competently performed restoration, but it never looked like it's new, in 4K, nor from the OCN.
Even if the OCN was badly restored, the material would still, I suppose, contain its argentic fine grain. It's absolutely nowhere to be found here. It's thick and fluctuating as if using a 3rd or 4th generation element, on a Telecine, and after adding EE all over it. It's also interesting to note the utmost majority of the movie, including simple shots without opticals, shows ringing everywhere, reminding me of some of the infamous Universal Hitchcock restorations like The Birds.
Also, the movie doesn't really show excessive fluctuation, it just goes from very blurry to pretty blurry. Sure, a few shots are slightly better while some are borderline SD, but it never feels like a chemical/physical fluctuation.
Finally, even if one would think "well, maybe it's just filtered somehow"... Possibly. But even so, the underlying grain field never feels like a fine OCN grain that's been smoothed out like, say, An American Werewolf in London.

In the end, I don't know what went wrong, but I've never seen a competent restoration, even from a beaten up element, where you can't guess what it's based upon and how it was scanned. And I've seen 4 older movies over the past month that were all in 35mm copies, 3 of them quite damaged, and absolutely none of those looked like this smooth blurry mess.

This looks like the whole movie is a 97 min optical shot.
Top

It's a far cry from say how The Man From Laramie looks on blu-ray, but this release isn't worth skipping. I don't have any technical expertise above, but I really don't think it looks too bad. And while the grain and density fluctuations are noticeable, I found overall the colors to be quite excellent. Again I can't really rate the technical presentation against any other 4k-administered/James White-overseen transfers, but if you compare it to the kind of print you'd be likely to see in a theater, I don't think you'd be too far off. And the film itself is excellent, and I enjoyed it more than Bend Of The River.

The extras are also really enjoyable. The Mann at Universal extra was succinct and a great crash-course in context around what brought Mann/Stewart together and the success of their films at Universal. In addition, you learn that Stewart used the same horse through all his Mann westerns, a horse named Pye. When the horse died, Henry Fonda bought him a painting of the horse which Stewart hung up in his horse, which almost certainly must be the inspiration for the trajectory of the horse in Sopranos, right?
Top

tenia wrote: ↑
Mon Dec 02, 2019 2:26 pm
and after adding EE all over it. It's also interesting to note the utmost majority of the movie, including simple shots without opticals, shows ringing everywhere, reminding me of some of the infamous Universal Hitchcock restorations like The Birds

I'm fairly certain the "ringing" are mackie lines that are inherent/baked-in to the source - and not some overly heinous, post-production tinkering on Arrow's part. I do agree about it looking like one giant optical. It would be interesting to get more insight into what exactly was done to get the most out of the deteriorated negative, 4K scans aside.
Top

I didn't say they did some hideous post-processing, but that's the only way I could think of to describe this.
It's indeed likely they're "Mackie lines" (just learnt a new term !), but it feels very strange they're often in places that don't look like they should display this kind of thing.

In any case, if anybody had to guess which element was used for this restoration, I highly doubt they would have thought it's from an OCN.
Top
Post Reply
28 posts