Calvin Lockhart (A Dandy in Aspic) and Marlene Clark (Ganja & Hess) have invited a disparate group of guests, including Peter Cushing (Corruption), Michael Gambon (The Cook, the Thief, His Wife & Her Lover) and Charles Gray (The Legacy), to their mansion in the English countryside. He believes one of them is a werewolf… and, before the weekend is out, he’ll find out who it is! The last of Amicus’ famed horror productions, The Beast Must Die combines the country-house whodunnit with the werewolf shocker and adds a dash of blaxploitation for good measure.

A fun film, and it was perhaps inevitable in retrospect that this might have appeared from Indicator as it compliments the William Castle sets nicely with its "Werewolf Break" before the climax!

Plus now there is a similarly themed film to replace the recently OOP Wolf!
Top

I think this was the first Amicus horror film I saw - I must have seen the Dr Who films before - and has remained a favourite ever since. This was one of the first films I wrote about for my thesis when I compared it to Hammer's Curse of the Werewolf and Tyburn's Legend of the Werewolf. It's been a long time since then, but IIRC my main conclusion was that (and this may well have been a byproduct of budgetary restrictions) was that the treatment of the werewolf owed more to traditional motifs, the Hammer and Tyburn to film (especially the Universal sequence). Anyway, Cushing's his usual great self and Lockhart has fun as a Great White Hunter - even if the plot makes NO SENSE WHATSOEVER. Lockhart has gathered all the guest cast because there have been werewolf-like attacks around each of them - but this only makes sense if they were all together each time...

I can't remember much about the Blish short story - there are elements in the film, but in many ways Christie's Ten Little Indians is at least as much of an influence. Incidentally, my copy of the story is in a collection called Peter Cushing's Monster Movies, edited by Peter Haining, and each story is preceded by a Cushing piece reminiscing about the related film.

EDIT: Oh - and another reference to Corruption as another Cushing film!
Top

I will say, I did guess who the werewolf was when I first saw this and was prompted to choose by the Werewolf Break, but it really was a guess— there’s no real way to know based on the clues we get because there are too many red herrings, so you just gotta close your eyes and point. Still, a W is a W
Top

domino harvey wrote: ↑
Thu May 07, 2020 3:58 pm
I will say, I did guess who the werewolf was when I first saw this and was prompted to choose by the Werewolf Break, but it really was a guess— there’s no real way to know based on the clues we get because there are too many red herrings, so you just gotta close your eyes and point. Still, a W is a W

Well, sort of - deliberately or not there is one pointer:
SpoilerShow
It is the person who tries to escape first.
Top

SpoilerShow
I also find it quite amusing that the whole gathering is really just a pretext to sort out a domestic dispute that could have been dealth with in a much more private manner! But I suppose that holds true for all country house murder mysteries in some ways, as well as letting the hunter subdue the beast with witnesses to back them up on their otherwise extremely wild claims for murdering their spouse!
Top

So I guessed wrong. OR DID I?
SpoilerShow
I guessed it was actually Calvin Lockhart's character, because he kept looking at the camera with these...werewolf eyes, and who could possibly be more suspicious as being a werewolf than someone who is, unprompted, constantly accusing everyone else of being a werewolf? Also, he was a werewolf by the end, so...
The Indicator release could really use a Goosebumps blog takedown commentary. I don't really have anything else to say
Top 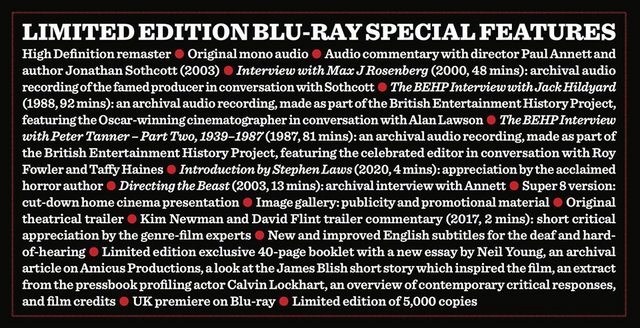 Does the "High Definition remaster" mean that it will be a 4k scan? I already have Severin's Amicus box set that includes this title. The transfer is not great in my opinion, but I am no expert. I was thinking of getting the Indicator release hoping for a better PQ and off course the booklet and extras. Today, Severin announced on their FB page that they will release a new version, which is a "A superior 35mm pre-print element ...that was recently unearthed in France and made available to us. The newly available superior element was scanned in 4k and fully restored by Studio Canal in France.". I am just wondering whether the Indicator release will have the same new master as Severin's re-issue.
Top

That's interesting. I would have supposed that even if it was only restored in HD, that it's stemming from a 4k scan would have been advertised.
Unfortunately, the booklet technical details offers no precision in this regard.
Top

Ph's webpage for this one has been updated and now indeed states : "4K restoration".
I watched it 2 days ago, and while it certainly isn't the most impressive one I've seen (it looks in particular as if many shots are too dark and have crushed blacks, but it also looks thicker that one would expect, which I guess stems from the element used for the restoration, most likely NOT the OCN), it definitely looked like deriving from 4K work. I was however surprised by the choice to only use a BD-25, thus quite constraining the movie's AVB in a way that wouldn't have happened with a BD-50. I would have thought, considering the appeal of the movie was such that the batch run was increased to 5000 copies instead of the usual 3000, using a BD-50 wouldn't have been financially an issue, but I guess that the movie's dark and thicker aspects are allowing for this lower AVB without generating blockiness.
Top


As ever with Indicator, the probability that the film will only be familiar to genre devotees has not prevented the label from sourcing a spanking transfer and lavishing the disc with quality special features. I’m not going to claim the film is a somehow forgotten classic, but this excellent disc still comes warmly recommended.

Mondo Digital confirms my strong suspicion that the new Severin disc uses exactly the same StudioCanal master as the Indicator one.

Incidentally, the Milton Subotsky interview that's on the Severin disc will be on Indicator's I, Monster, where it's just as on-topic.
Top