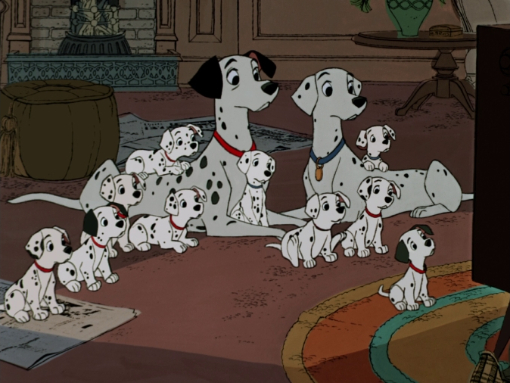 Pongo, Perdita and their super-adorable puppies are in for thrills, hilarious spills and an epic action-packed adventure when they face off with Cruella De Vil, Disney's most fabulously outrageous villainess. When Cruella dognaps all of the Dalmatian puppies in London, brave animal heroes launch a daring plan to save all puppies from Cruella's clutches! Unleash all the excitement and suspense of Disney's 101 Dalmatians, a beloved classic you'll want to share with your family again and again!

Disney’s 101 Dalmatians makes its Blu-ray debut state side (it had already been released on the format in the UK), presented in the aspect ratio of 1.33:1 (the intended ratio, though it had also been screened in a widescreen ratio, cutting off the top and bottom) on this dual-layer disc in 1080p/24hz.

The general presentation is similar to other Disney features on Blu-ray: overall it looks good, having been nicely cleaned up, presenting no noticeable damage. Colours look particularly nice, with some rich greens, reds, and pinks, and black levels appear rich and nicely balanced. Detail is decent, with the fine lines from the rough line work still coming through well, but this aspect is still open to improvement: Disney still has a tendency to apply noise reduction to their films in an effort, I believe, to get it to look closer to the original cell. This is all fine and dandy but there’s an ever-so-slight smudginess to the image, where the line work just isn’t as sharp as it probably should be. It didn’t bother me as much with some of the earlier Disney Blu-rays, but over time it’s getting somewhat frustrating, especially after I just viewed Criterion’s release of the classically animated Watership Down, the presentation of which wasn’t heavily filtered, in the end retaining a sharp, filmic look. It looked good.

Ultimately there’s nothing overtly wrong with what we get, but I know it could look better. 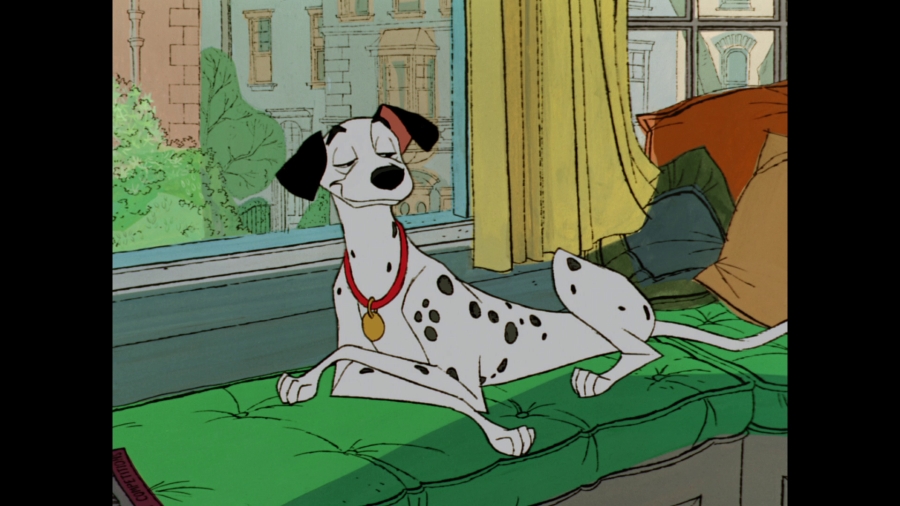 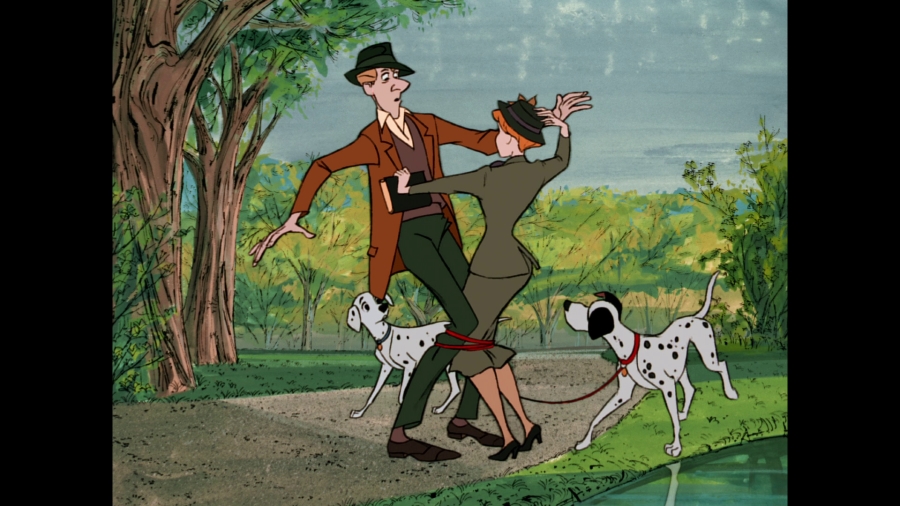 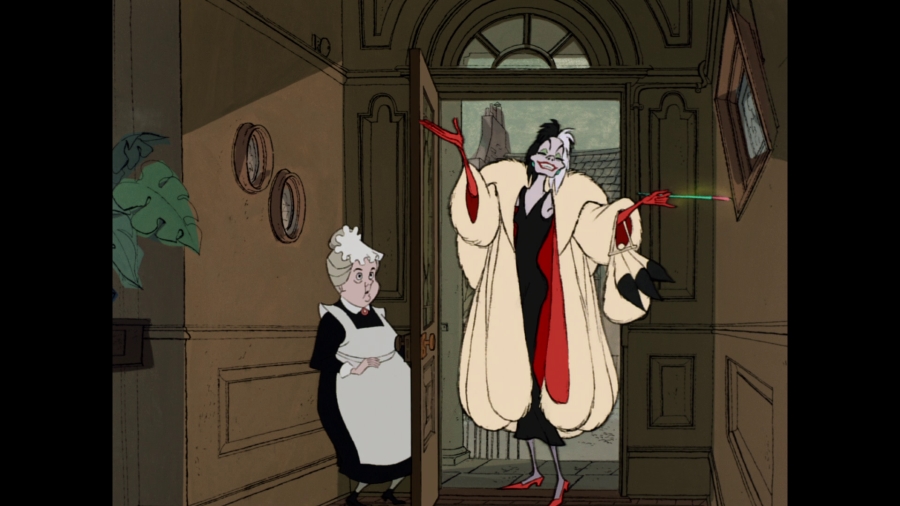 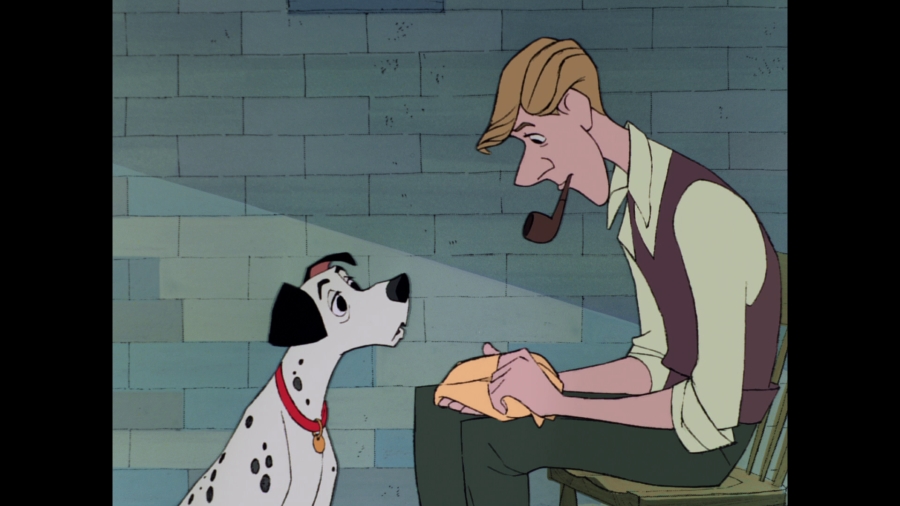 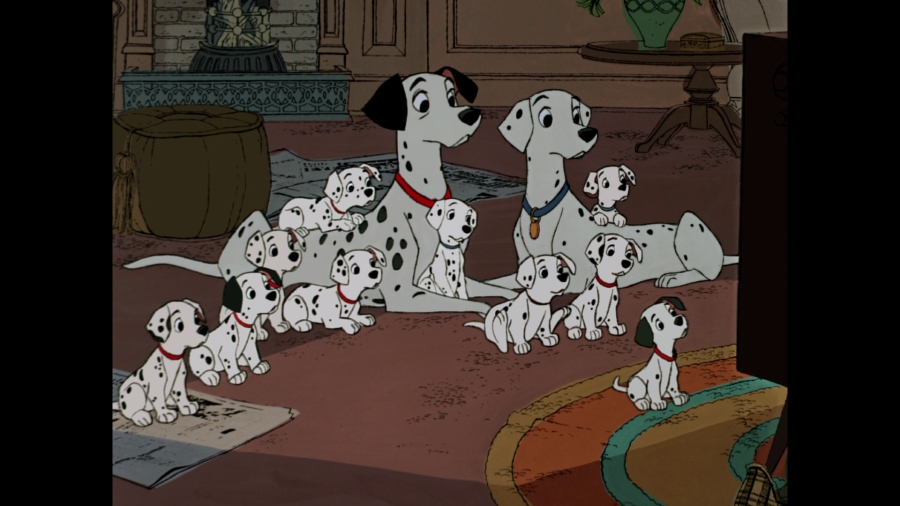 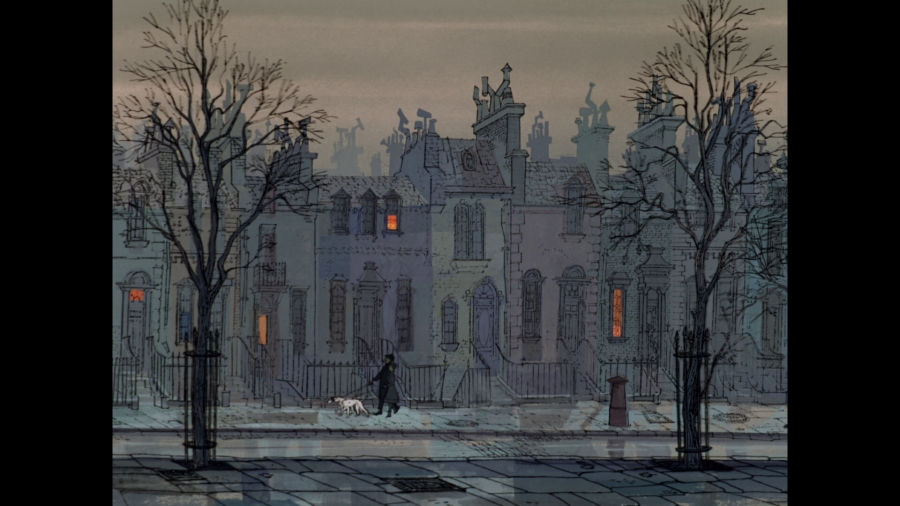 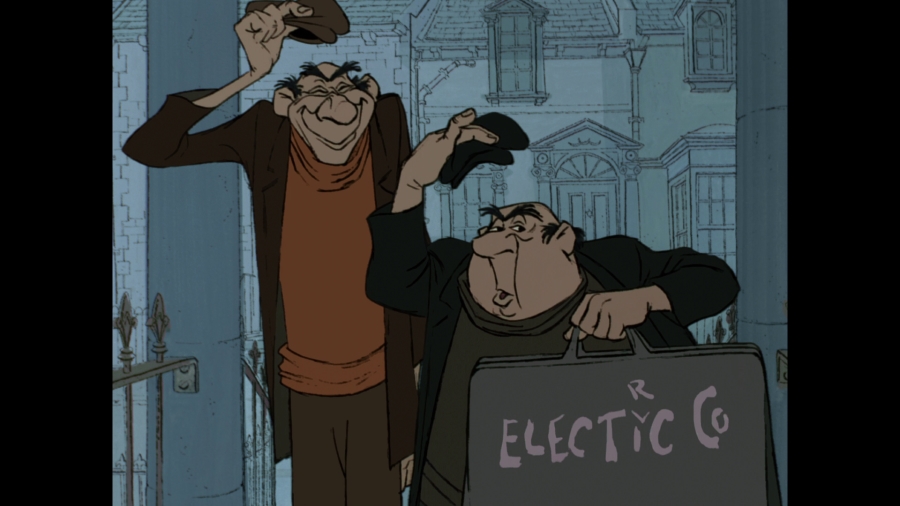 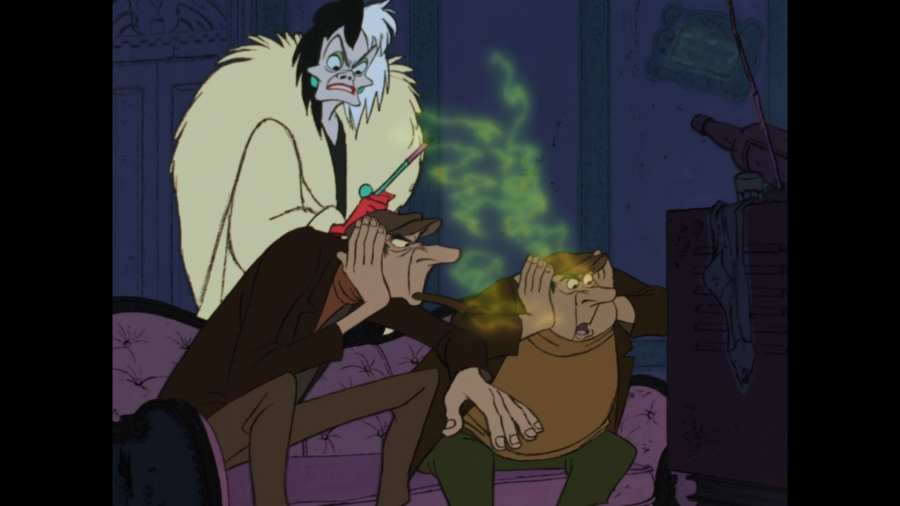 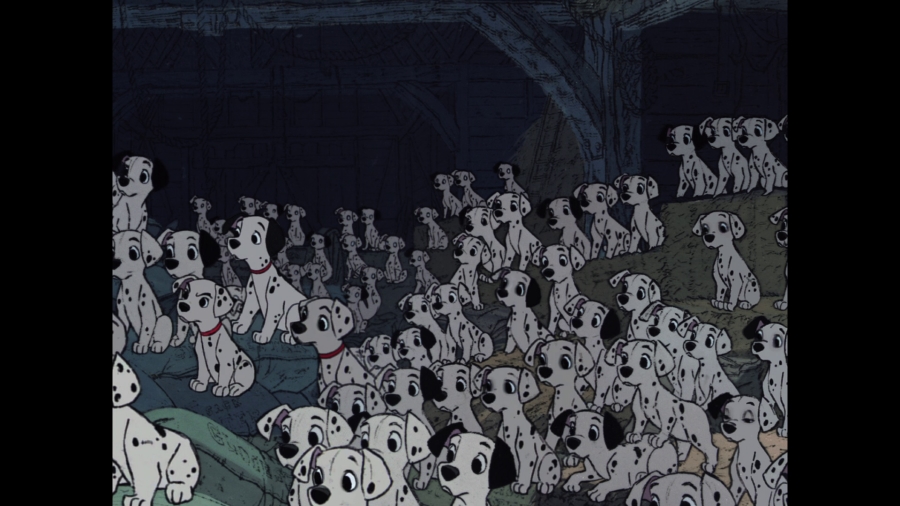 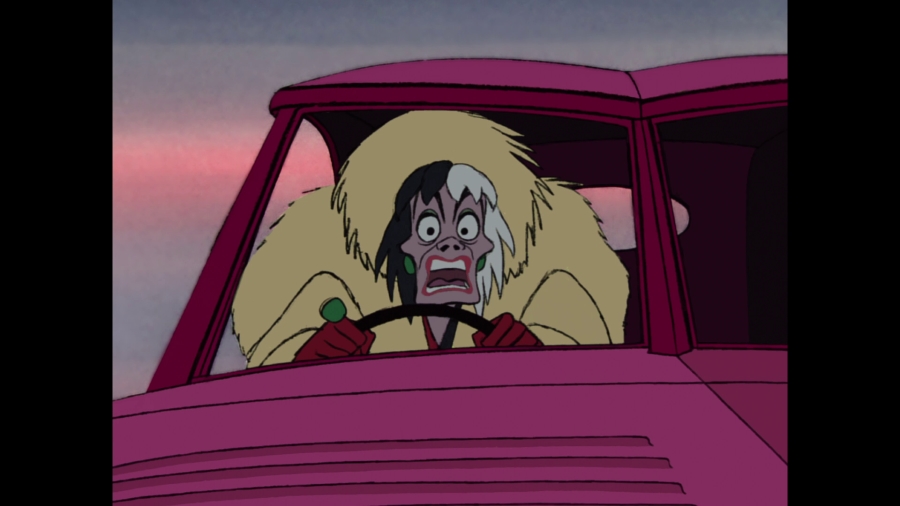 Disney includes a lossless DTS-HD MA 7.1 surround track for the film. In the end that’s all I felt this was. I didn’t notice too much in the way of directing the audio between the speakers, with music filling out the environment but with little in the way of splits. Most of the sound effects, as well as dialogue, stick to the fronts. Some of the action scenes near the end are a bit more creative but I honestly didn’t notice much. Sound quality on the other hand is very good, with crisp dialogue and music.

Supplements are fairly ho-hum on the whole but there are a few decent gems to be found. New material begins with a barely 2-minute short, The Further Adventures of Thunderbolt, which is a newly animated feature based on the television program the puppies were watching in the film, involving a ranger’s dog tracking down a thief. Following this is then a new 9-minute segment called Lucky Dogs, featuring interviews with various animators who worked on the film. It feels to be more of an extension to another making-of found on this disc (which has been ported over from the previous DVD edition of the film) getting into more detail about the financial difficulties the animation department were facing at the time, with the costly Sleeping Beauty severely hurting the studio. There was talk of shuttering the animation department though cooler heads decided to look for ways to cut back, which led to the Xerox copying process for creating animation cells, which were usually done by hand and cost a lot to do (Disney himself was actually not a big fan of this process, as he felt it looked rough). It’s odd that they actually went out of their way to film this, especially when there’s another longer feature about the making of the film on here, but it’s at least interesting.

Not at all interesting and easily the most pointless feature on here is Dalmatians 101: Hosted by Cameron Boyce. It’s really just a sorry excuse of an ad for an upcoming film called Descendants, which appears to be about the offspring of the various Disney villains, with Boyce appearing as Cruella’s son, or something. He then goes through the reasons why 101 Dalmatians is great, including the fact it’s “totally modern!” and did animation without computers… or something. It’s a useless 5-minute feature and I’m not sure who the intended audience is. I find it completely useless and I doubt my kids would find it appealing.

A little more interesting is a feature from the archives: a 1961 television episode called The Best Doggoned Dog in the World, hosted by Disney himself. The program is ultimately an ad for 101 Dalmatians with half of the program devoted to clips from the film, but it does actually have some educational merit to it, going over various breeds of dogs, how people have trained them for various tasks over the centuries, and even offers some “recreations” of sorts. It’s not a must-see feature but I enjoyed it more for the historical/archival aspect of it. Disappointingly it looks to be upscaled standard-definition but it’s a good addition. It runs about 51-minutes.

Disney then ports over a number of “classic” features from the old DVD edition, starting with Redefining the Line: The Making of 101 Dalmatians. The 34-minute program offers a general look into the making of the film, from the book origins to its new “modern” style and look, which was sort of born out of the new Xerox copy process, brought in to cut down costs. The piece actually focuses a lot on this aspect, which really changed animation at the company and cut out the high costs of inking and painting. There was of course differing opinions on this: Walt himself wasn’t fond of it, but the animators loved it since it allowed their actually artwork would be carried to the screen, instead of being redrawn/traced by other artists. The ones not at all fond of this new technology were the inkers and painters: the whole department was laid off. It’s a short feature but I found it one of the more interesting making-ofs to come from Disney, primarily because of the move to Xerox copying. There’s also a bit on how they created the 3D look of the vehicles, using actual models. Good stuff overall.

There’s then a short 7-minute section devoted completely to Cruella de Vil, which is much deserved. She’s a fascinating, fun, and absolutely ridiculous character, vibrantly animated and beautifully voiced. Here we get a look at the design of the character, archival interviews with animator Marc Davis, and some behind the scenes footage of the modeling done for the character. It’s short and quick, but a nice look at one of Disney’s more out-there villains.

”Sincerely Yours, Walt Disney” is a somewhat ridiculous feature, at least in presentation. It offers “recreations” of letters written between Disney and Dodie Smith, author of the novel. They corresponded for a few years, Disney going over the development of the film, Smith seeming rather excited by the prospect, even admitting while writing the book she imagined it as an animated film. She was disappointed by some changes to the story, but was generally pleased. I actually would have preferred the letters presented in a gallery of sorts but I’m guessing Disney figured most wouldn’t be thrilled with a feature like that.

The disc then includes a few theatrical trailers, TV spots, and Radio Spots for the film over its various releases. The release then closes off with a video featuring Selena Gomez singing Cruella de Vil (ugh), a couple of deleted songs, including March of the One Hundred and One, Cheerio, Goodbye, Toodle-oo, Hip Hip!, and Don’t Buy a Parrot From a Sailor. There’s then a collection of demos and alternate songs, including a number of varying versions for Cruella de Vil, which was particularly fun to go through.

When playing the film you also have the option of watching it with “Disney View” turned on. This actually fills in the black bars on either side of the screen with artwork, in this case by Mike Humphries. The artwork is fine though not particularly special, featuring the same image of a bass (I think) over and over, just in different shades, with samplings of background art and other things as well. I don’t particularly get this feature, which has also been available on other releases featuring films in the standard ratio. I’m guessing it’s for those that don’t like the black bars on the side, but I find it a bit distracting. Plus, couldn’t they have at least included the alternate widescreen version in that case, which would be more interesting to me, if just for comparison’s sake.

In the end some decent features, including a decent making-of, some interesting sampling of music, and an interesting archival feature, but that’s about it.

It could be better all around, but Disney’s Blu-ray release at least gives us a decent enough presentation and a few worthwhile supplements. 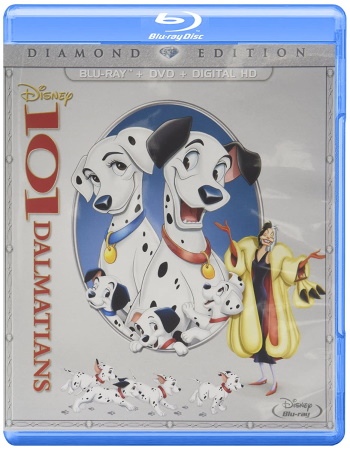 The Sword in the Stone (DVD/Blu-ray)