﻿ Ace in the Hole Review :: Criterion Forum
The Criterion Collection

Ace in the Hole 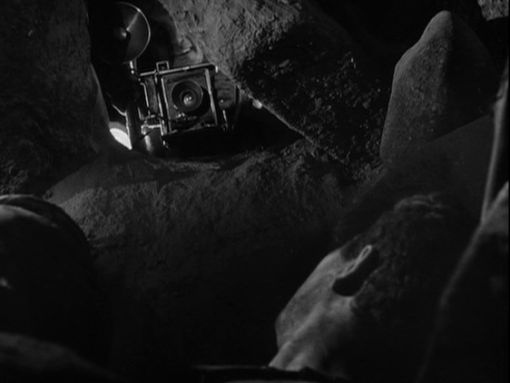 One of the most scathing indictments of American culture ever produced by a Hollywood filmmaker, Billy Wilder's Ace in the Hole is legendary for both its cutting social critique and its status as a hard-to-find cult classic. Kirk Douglas gives the fiercest performance of his career as Chuck Tatum, an amoral newspaper reporter caught in dead-end Albuquerque who happens upon the story of a lifetime-and will do anything to ensure he gets the scoop. Wilder's follow-up to Sunset Boulevard is an even darker vision, a no-holds-barred exposé that anticipated the rise of the American media circus.

Criterion’s DVD edition of Ace in the Hole marked the home video debut for the film in North America. Criterion delivers the film on the first dual-layer DVD of this two-disc set in its original aspect ratio of around 1.33:1. As was common with most full-screen Criterion DVDs at the time the image has unfortunately been window-boxed.

For a film that was incredibly hard to come by for such a long period of time Criterion’s presentation does look rather spectacular. The film has been beautifully restored and only a small level of damage appears to remain: some specs of dirt, a few scratches, and some pulsating in places. Where the source allows the image is incredibly sharp, managing to deliver fine details adequately enough. A few moments go fuzzy here and there but it appears to be a source issue. Contrast looks good delivering great white and black levels, and decent tonal shifts of gray in between. The usual level of DVD compression is present but it’s fairly unobtrusive.

The only real glaring issue is that thick black border around the image, put in place by Criterion for televisions with overscan, effectively annoying those who don’t have issues with overscan. This shrinks down the image in the center of the screen. The new dual-format edition (which contains both a Blu-ray and DVD version of the film) features a new encode on the DVD that actually does shrink this black border down so it’s not as noticeable. The transfer looks to be otherwise the same.

Though a better edition does exist and the black border is a bit annoying it’s still a rather solid transfer that’s held up well over the years. 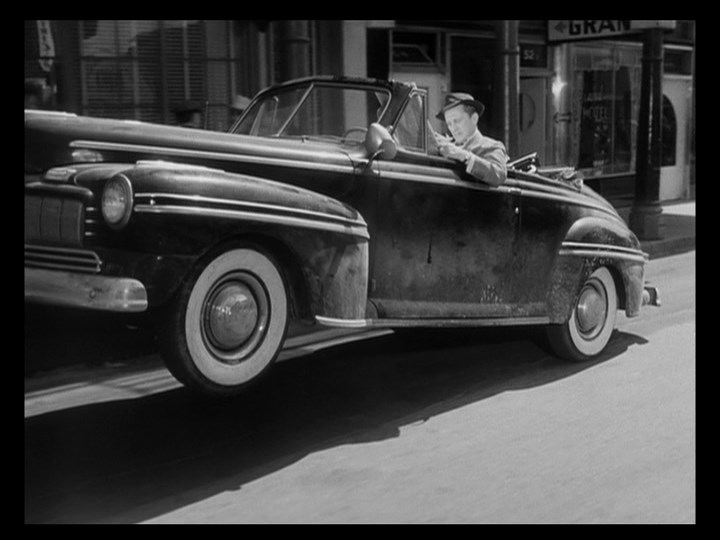 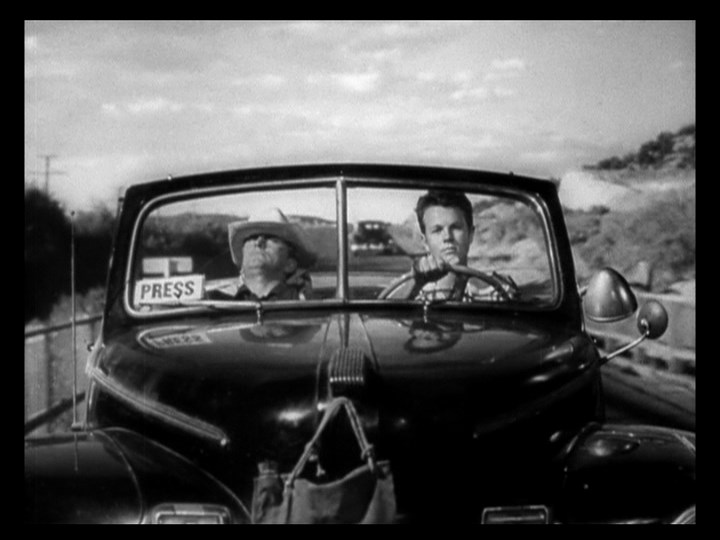 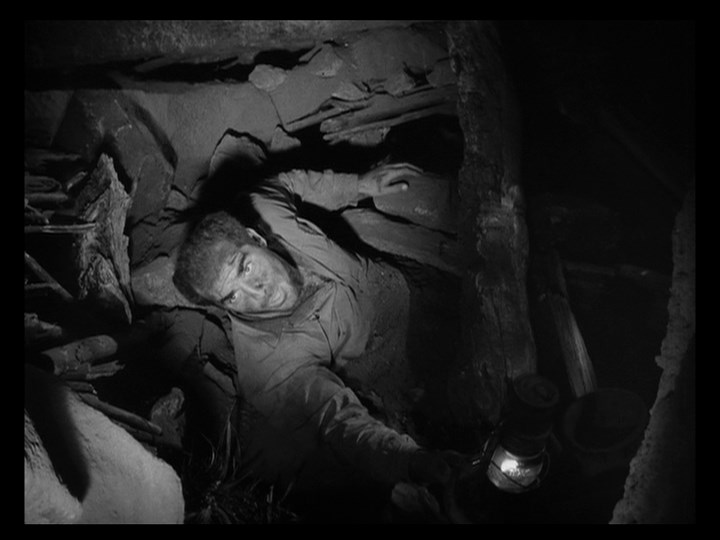 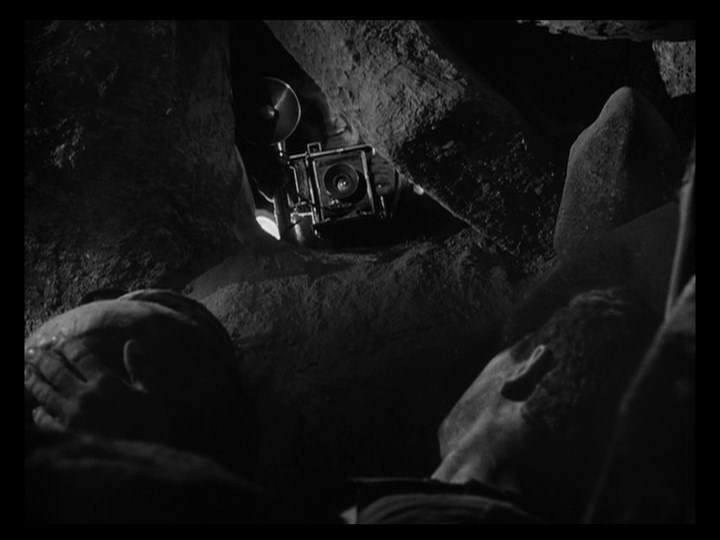 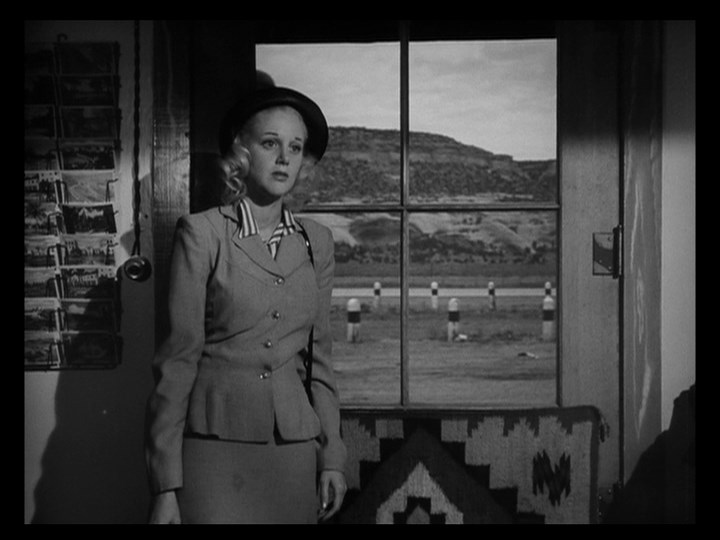 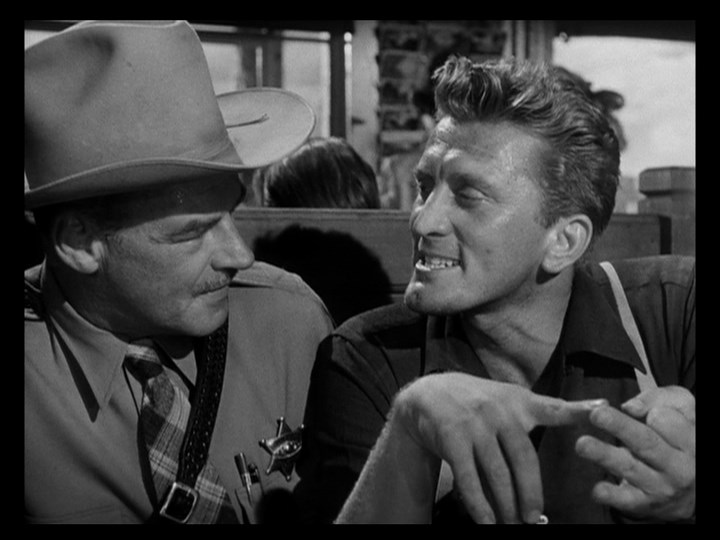 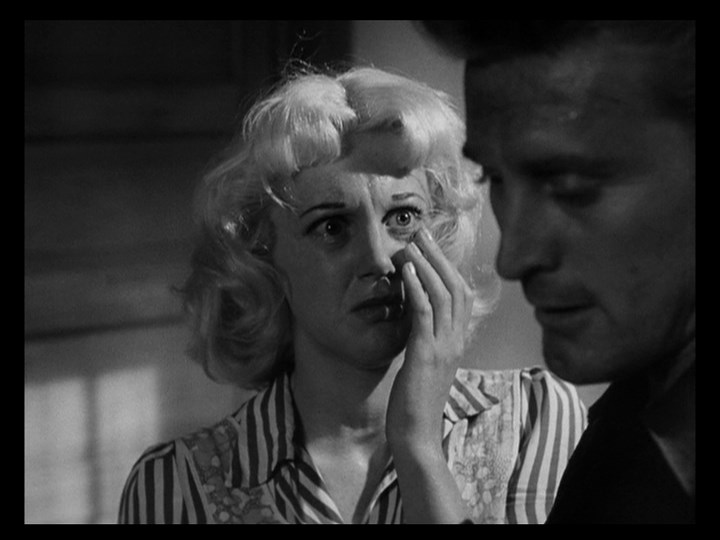 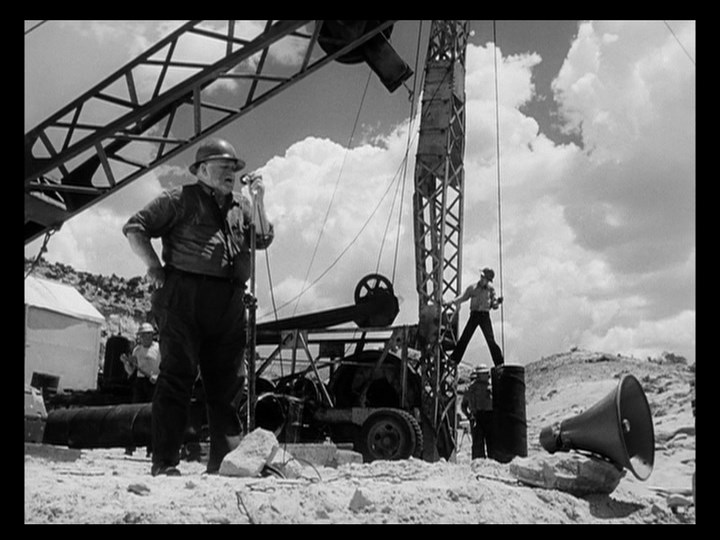 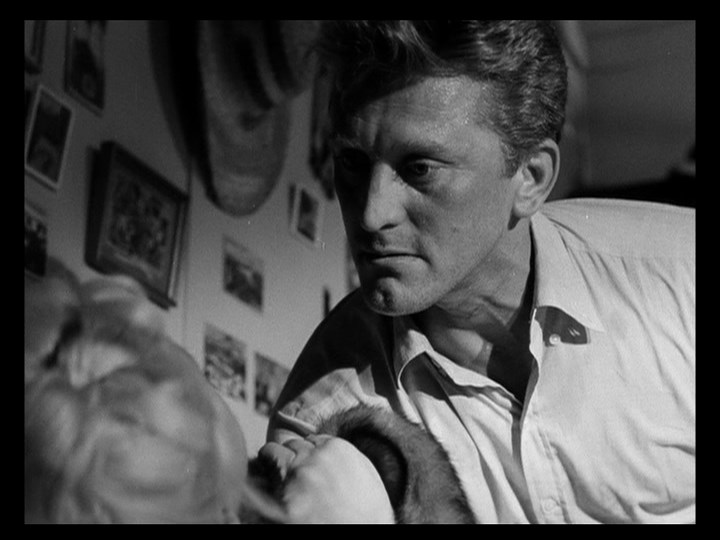 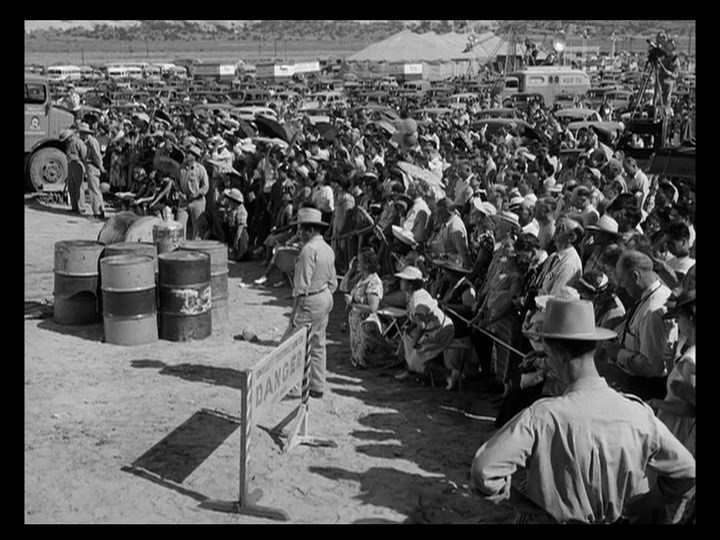 For the age of the film the audio, presented in Dolby Digital 1.0 mono, sounds pretty good. Dialogue is clear and articulate and music has surprisingly strong range. The track is clean and free of background noise and distortion, culminating to a rather strong mono presentation.

The two-disc set packs on a few great supplements. The first disc features a couple of items starting with an audio commentary by film scholar Neil Sinyard. It’s a very scholarly but mostly enjoyable track. Sinyard goes over the film’s production, explaining how Wilder was able to get away with making what is undeniably a very cynical film (at least for audiences at the time) and even tries to explain why the film more than likely flopped, concentrating on Wilder’s European senses and the Nazi’s effect on Europe. He also goes over the character development, how Wilder uses visuals to develop and explain the characters, and even talks about things cut from the film, including lines that would have just put the film over the edge. It’s also somewhat amusing when he makes parallels between the film’s story and its production. Adding in some detailed history about Wilder, the actors, and anecdotes from the shoot, it turns out to be a fairly engaging track.

The first disc then closes with the film’s theatrical trailer.

The second dual-layer disc features the remaining features. First is Portrait of a “60% Perfect Man”: Billy Wilder, a 58-minute interview between Wilder and film critic Michel Ciment filmed in 1980, has also been carried over. Ciment talks with the director at his office and home, going over his early life as a newspaperman, fleeing Europe once Hitler came into power, and first getting a screenwriting contract at Paramount (which he describes as an assembly line.) He claims he learned a lot about directing by watching Howard Hawks (I assume while they were working on Ball of Fire) and he then made his move from writer to director. He talks about a few of his films, from the lessons he learned on Ace in the Hole to the disappointing returns on One, Two, Three. He also talks about his preference to shooting in a studio, how he casts his films, working with certain actors, catching specific shots and looks in his films (specifically those office scenes in The Apartment) and then even talks about his art collection. Both Walter Matthau and Jack Lemmon also show up to talk about the director, Lemmon recalling a humourous story on how they tested their drag outfits in Some Like it Hot and Matthau disappointed that Wilder never saw the actor as a sex symbol. Wilder is an absolutely fascinating figure and this conversation is never dull and incredibly informative.

And if you didn’t get enough of Wilder and his stories there Criterion includes excerpts from a Q/A session at The American Film Institute, conducted in 1986. This 24-minute collection of footage actually focuses a lot on the studio system he worked in. He first talks about the studio execs and how he understood their plight of needing the films to make money, so he did aim to make his films as commercial as possible. He then later talks about how the studios worked, how projects were developed, how they worked together or how the didn’t work together, how they would watch over him while working, and even how he had to keep track of who was in charge week to week so he would know “whose ass you [had to] lick.” I always appreciate stories about the old Hollywood and the studios and I found this one particularly fascinating as well as entertaining.

Criterion also digs up an excellent 1984 interview with Kirk Douglas and presents excerpts from it that have the actor focus on Wilder or Ace in the Hole. He’s particularly proud of this role, particularly the sleaziness of the character, and he mentions how he likes to play different types of characters, not always good, strong, masculine ones (which leads to a rather eye-opening anecdote about John Wayne expressing his disappointment in Douglas for playing a weak character in Lust for Life.) He talks fondly of Wilder and deeply regrets not working with the director again, having turned down the role he was offered in Stalag 17, and he then defends Ace in the Hole, giving his own idea as to why the film was not only a box office flop but why the critics didn’t seem to care for it. The interview runs 14-minutes.

Writer Walter Newman recalls writing the script with Wilder in an excerpt from a 1970 audio interview with the man. I found this interview of particular interest as Newman offers possible alternate scenarios, including a different opening and how certain scenes would play out, as well as a rather creative alternate to the Paramount logo at the beginning. He also explains how he tried to make the Douglas character somewhat sympathetic (amusingly this was accomplished by making all of the other characters far more despicable) and shares how Wilder built up sequences. The interview lasts 10-minutes.

Spike Lee provides a 6-minute afterword to the film, offering his admiration for the film and its ahead-for-its-time examination of the media, as well as its criticisms of that attitude of doing anything for a buck. The film was obviously a big influence on him and he admits to even stealing the film’s final shot for Malcolm X, and he even shows off his poster (using the alternate title The Big Carnival) which he had signed by both Wilder and Douglas.

Criterion then closes off the features with a small stills gallery.

Criterion then includes a rather clever insert: the insert folds out to a newspaper, complete with photos and ads. It features an essay on the film and Wilder by Molly Haskell while director Guy Maddin writes about actor Kirk Douglas (in an article aptly titles “Chin Up for Mother.”) It’s an excellent read with a wonderful presentation. All content appears to be here but the dimensions are slightly different so it can fit in this new edition’s case.

In all Criterion delivers a wonderful set of supplements, all worth the effort of going through.

Though a better dual-format edition exists (it contains all the same features, a noticeably better high-definition presentation on the Blu-ray and a DVD that features a transfer with a less aggressive black border around the image) this DVD still delivers a strong transfer and an excellent selection of supplements. 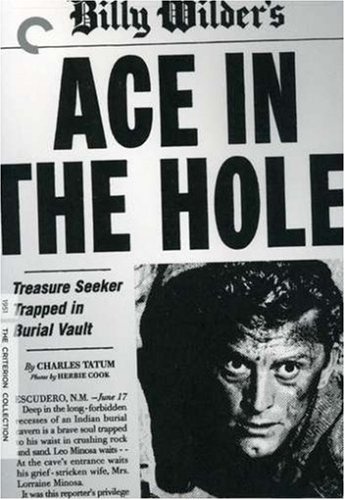 Ace in the Hole (DVD/Blu-ray)