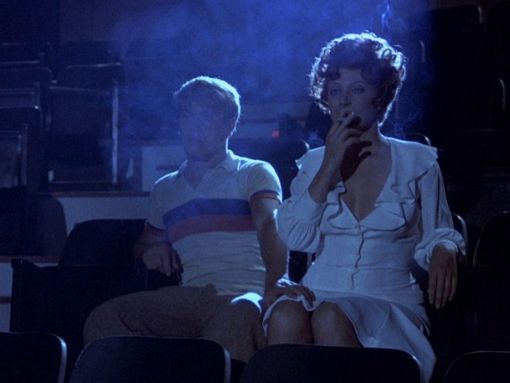 This carnivalesque portrait of provincial Italy during the fascist period, the most personal film from Federico Fellini, satirizes the director’s youth and turns daily life into a circus of social rituals, adolescent desires, male fantasies, and political subterfuge, all set to Nina Rota’s classic, nostalgia-tinged score. The Academy Award–winning Amarcord remains one of cinema’s enduring treasures.

Amarcord comes to Blu-ray from Criterion in a 1080p/24hz high-def transfer in the film's original aspect ratio of 1.85:1 on this dual-layer disc.

Amarcord was actually Criterion's first DVD release (despite having a spine number of 4) and it was a rough edition with a fairly horrid, noisy transfer. In 2006 they reissued it with a new transfer on DVD and it was a drastic improvement. The high-def transfer found here looks to be based off of the exact same one used for the newer DVD edition.

The presentation is rather striking and not only offers an incredibly substantial improvement over the original 1998 DVD but it also offers a noticeable improvement over the 2006 DVD. Colours are probably the most noticeable improvement, with reds looking brighter and bolder, and blacks also coming off fairly deep when the source materials allow it. When they don't allow it blacks can look a little faded or crushed during darker sequences. The image is sharp with some excellent definition and it never seems to go soft at any point. Film grain looks natural and never like noise, and other than some shimmering effects found in some patterns the digital transfer doesn't present any other problems.

The source elements used are ordinarily in excellent shape but there are a few moments where the image can look more worn and faded than other areas of the film. Based on the restoration demonstration presented in the supplements it appears these sequences come from a different set of elements in comparison to what was primarily used because of irreparable damage in the main source. Past these minor issues the transfer looks lovely and is the best I've yet seen the film. 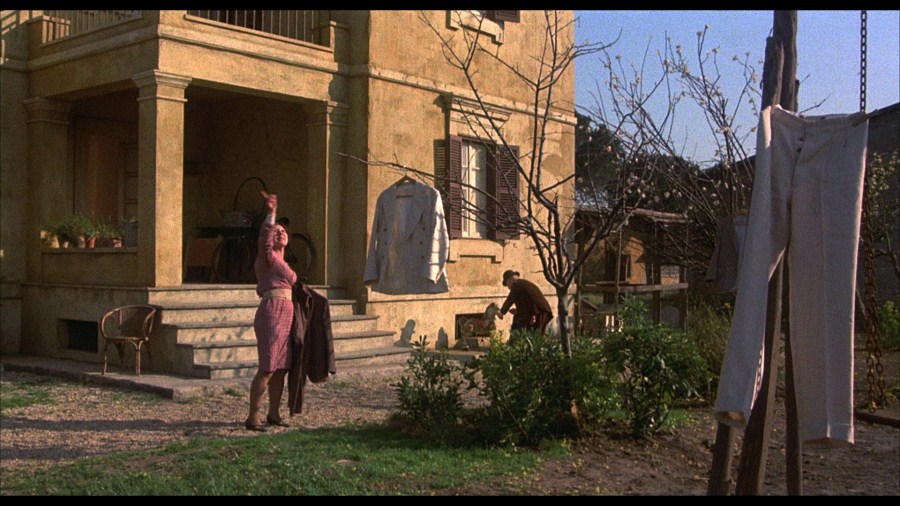 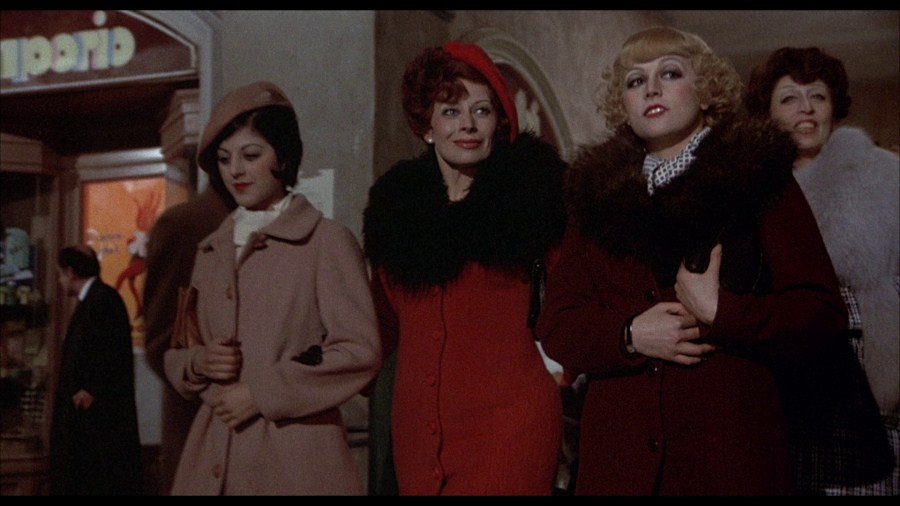 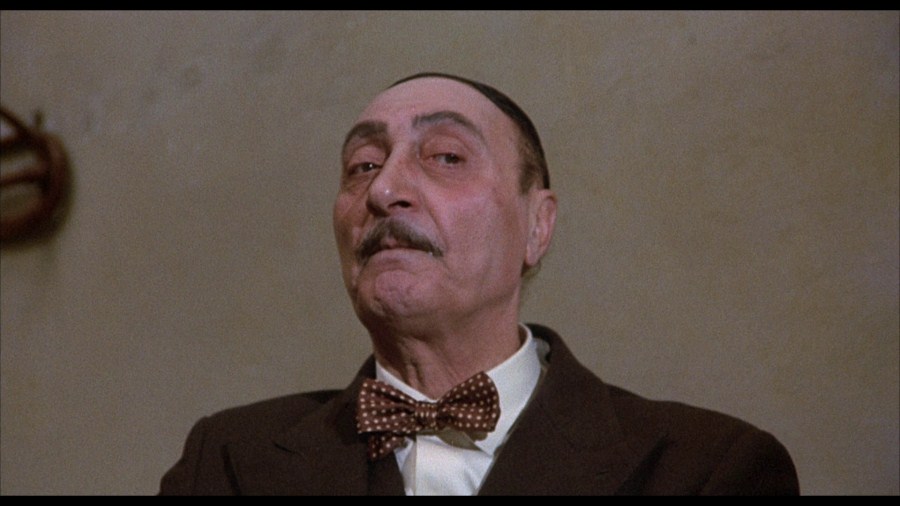 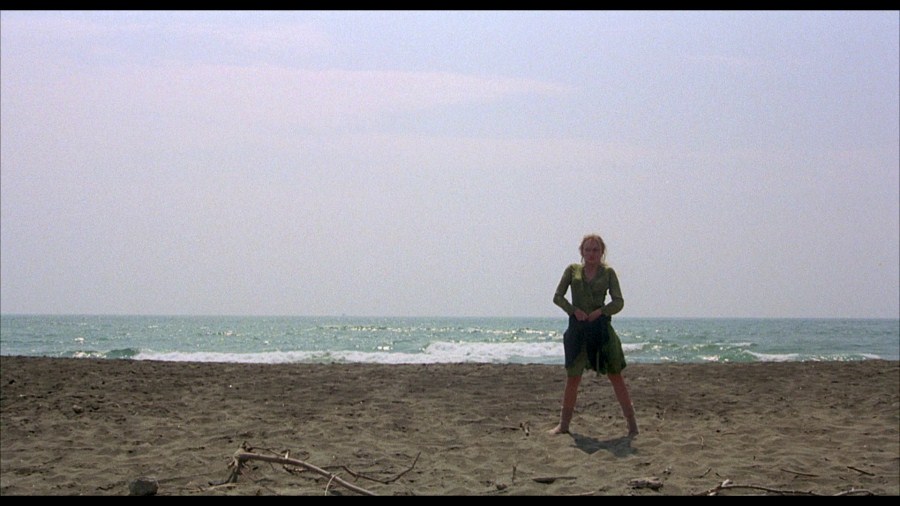 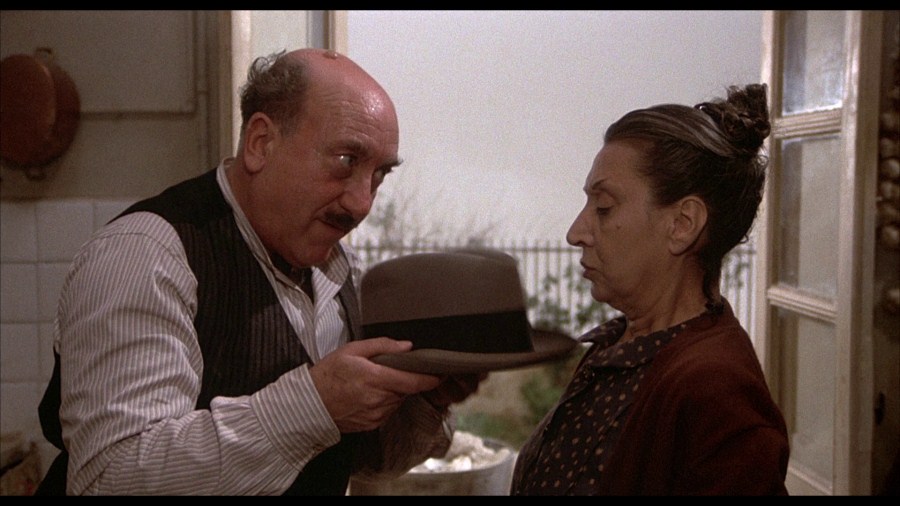 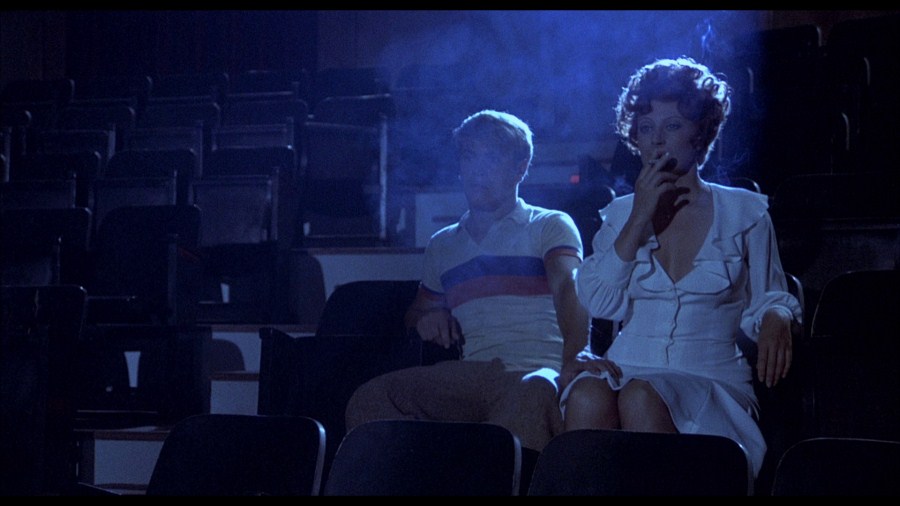 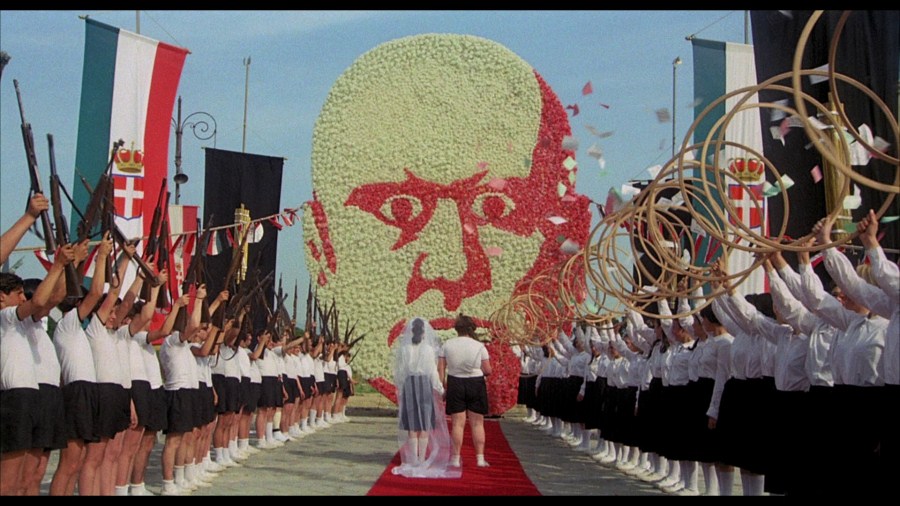 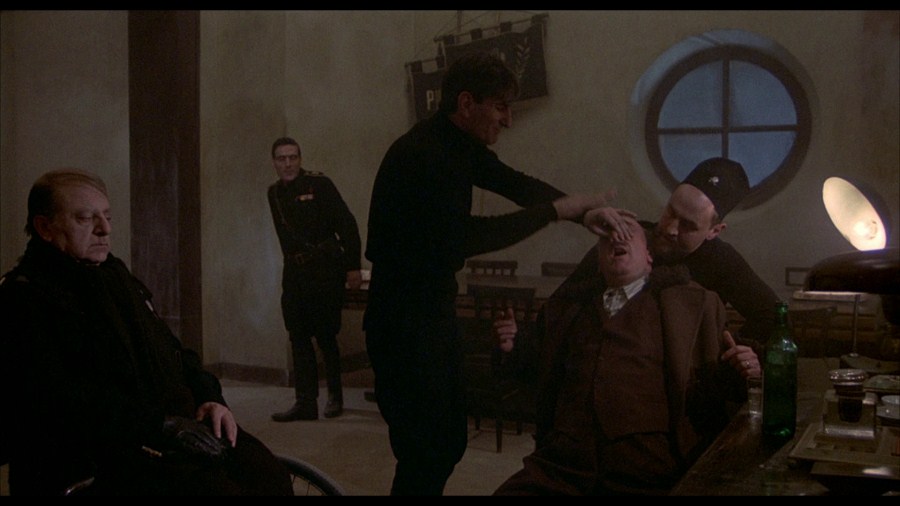 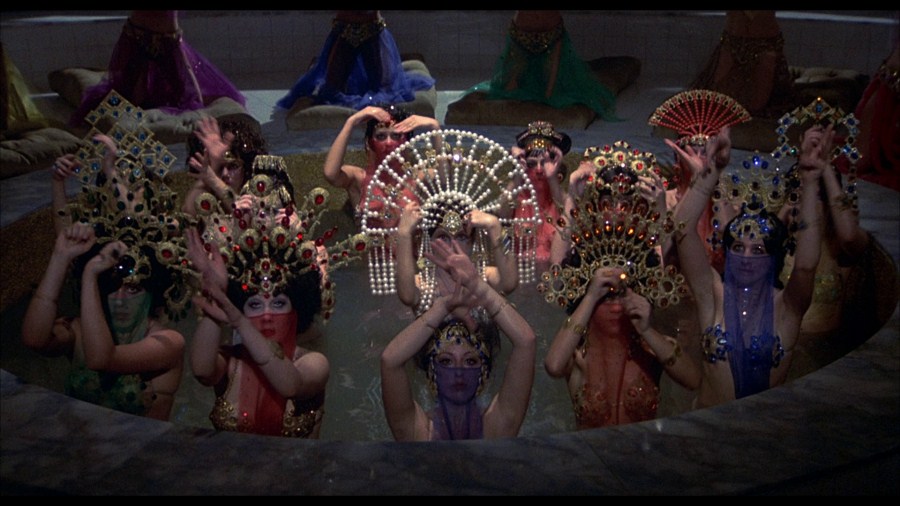 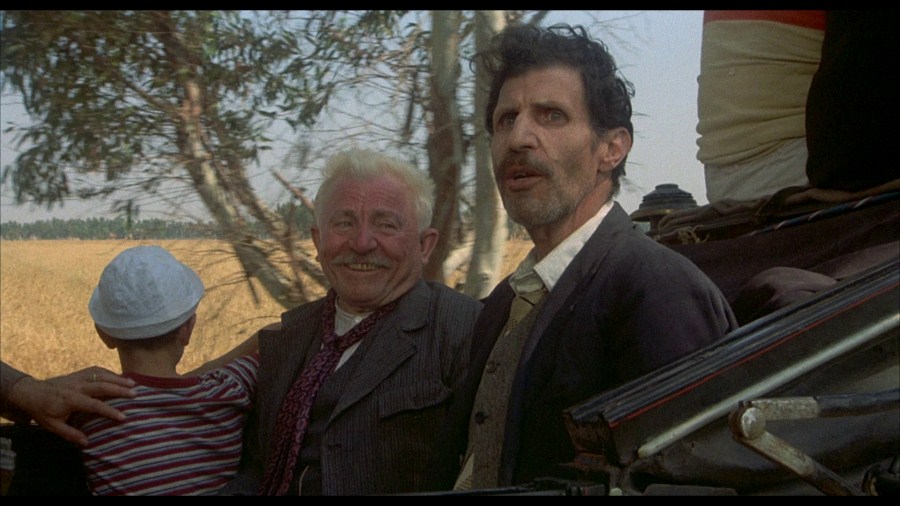 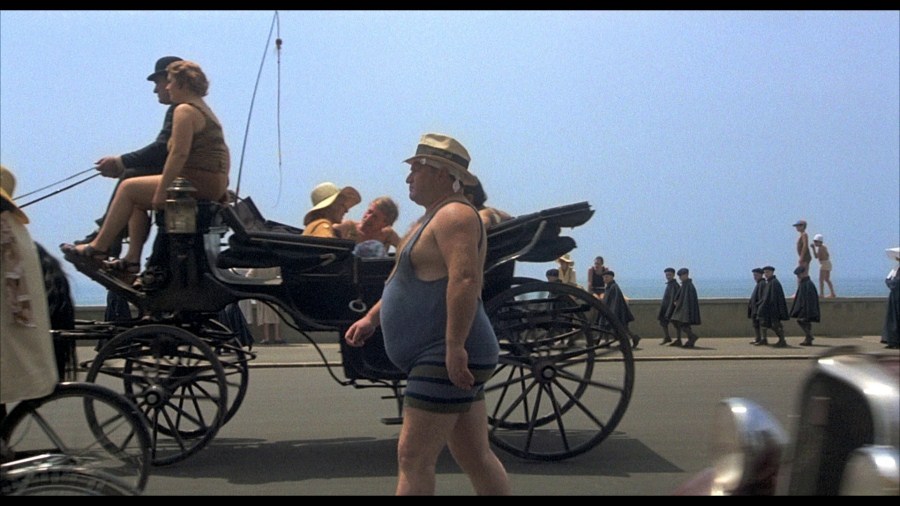 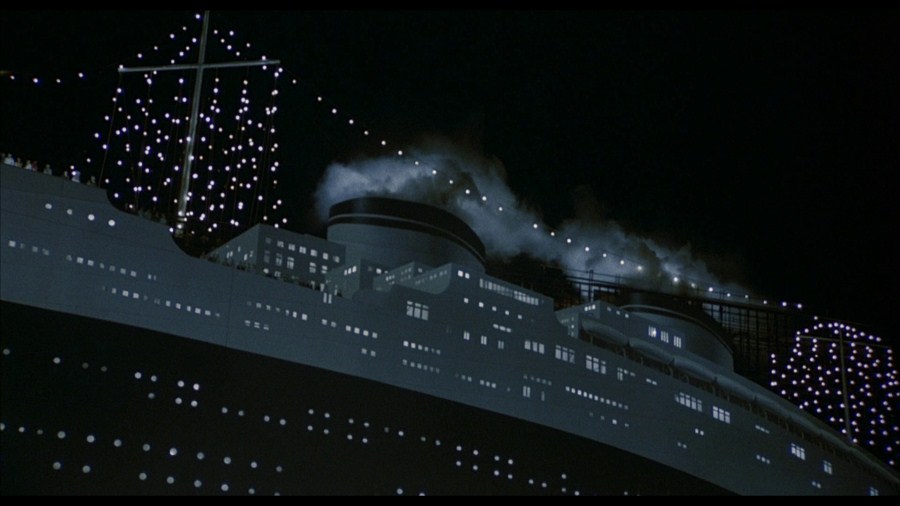 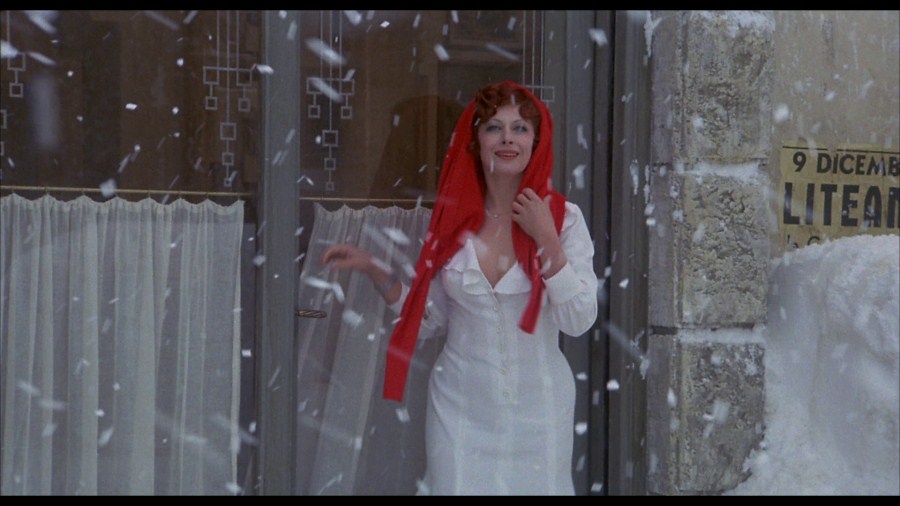 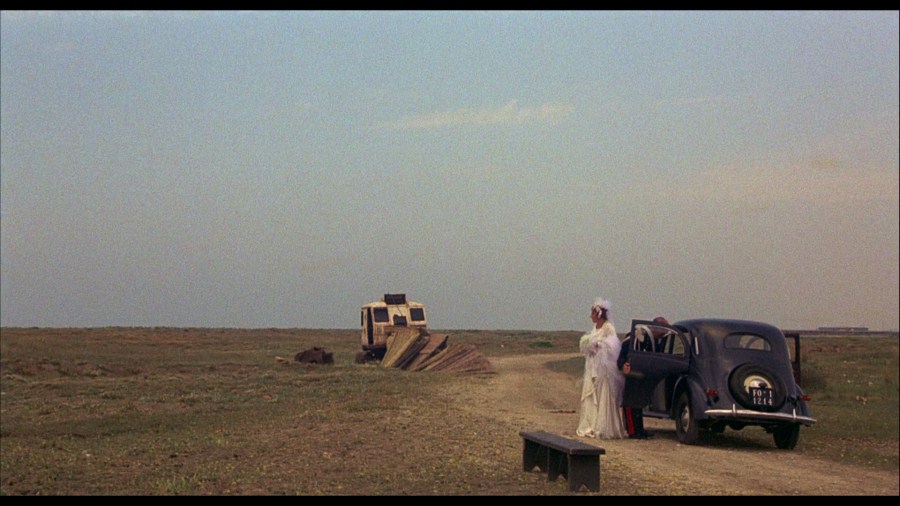 Criterion includes a lossless linear PCM mono track in the film's original Italian along with an alternate English track presented in Dolby Digital 1.0 mono. The Italian track is of course the one to go with not only because it's the original track but also because it is the stronger of the two. Although dialogue appears to have been looped it actually does sound fairly natural and doesn't come off detached like the original DVD's audio did. The film's score sounds lively and actually has some nice range to it. The track also sounds to have been cleaned up nicely and I couldn't detect any damage that hampered the presentation in any way.

The English track on the other hand is a bit weak, and the dubbed English dialogue never feels natural to the scene. The music is also weaker here. It's an interesting curiosity but that's about it.

Criterion ports everything over from their 2-disc DVD edition including, thankfully, the thick booklet.

First up is the same audio commentary from the 2006 DVD edition featuring film scholars Peter Brunette and Frank Burke. I was actually surprised by this one, more because of the fact that, for a scholarly track, it's rather lively and involving. The two talk about the film and the things in it that are pulled from Fellini's life. They do cover his career as well as those of the film's cast and talk about the film's popularity. They also, of course, talk about the flights-of-fancy found throughout and also touch a bit on the film's presentation of Fascism and offer some historical context. While the track certainly didn't blow me away (it covers the information you'd expect a scholarly track would) having the two pretty much feeding off of each other to keep the track going helps it move along and keep it from being a drag to sit through, even if they can take some of the fun out of the film with their observations. Still, it's rather good and worth a listen.

Following this is a 44-minute documentary made by Criterion about the film, called Fellini's Homecoming, which features various friends and acquaintances that have known him either personally or through work over the years. Participants talk about knowing Fellini and point out where some of the items in the film come from in his personal life. Those involved in the film's production in one way or another also reflect on the making of it. There are a few surprises in here (specifically that the tobacconist was based on a real individual, if exaggerated in the film) and a couple of amusing anecdotes, though it's slightly hindered by the fact it's almost completely a talking-heads doc, which makes it a bit stale.

An interview with Magli Noël'who played Gradisca'is included next, looking to have been recorded many years ago (I didn't see a date.) Here she talks about how she got the role and the frustrating screen test she had to get through after dropping everything and flying to the set location. She gives some details about her character and what she knew of the actual individual on whom the character is based, ultimately calling her character a 'loose woman.' She also talks a little bout Fellini's style and what it was like to work with him. Brief and quick, and filled with some decent information not covered elsewhere in the set, it's worth viewing.

Next up is decent sized gallery of Fellini's Drawings. Navigating through it using your remote, Criterion presents about 14 of Fellini's drawings of the various characters in the film with comparison photos to the 'finished product', so to speak. Though Fellini's drawings are exaggerated I was surprised by the fact that the actual actors in the roles aren't that far off.

Felliniana is another gallery of sorts, divided into two sections. First we get a rather large photo gallery featuring production photos, poster art from around the world, lobby cards, and press books in a variety of languages. Also found in this section are radio ads, four to be exact, running a total of two-and-a-half minutes. Interesting to listen to but the 'tag line' ('Amarcord means remember; you'll remember Amarcord') gets a little insufferable when it's repeated again and again.

The next feature are Gideon Bachmann Interviews, audio recordings he made with Fellini and his family and friends. The first interview is 30-minutes and is with Fellini, and the second compilation runs about 59-minutes and is with his friends and family. Fellini talks about his art and movie-making style in general, while the rather exhaustive family/friends interview segment features (which features his sister and mother among others) is more about Fellini personally than his work. I sampled the latter track admittedly and must say that I think only the hardcore Fellini fan will probably want to listen to either, but the inclusion is welcome and I'm still happy Criterion made the effort. Both interviews are again audio-only and play over photos and are in a mix of English and Italian.

Criterion includes a restoration demonstration running 5-minutes showing the improvements Criterion has made in comparison to the original 1998 DVD. It should be noted this is the exact same demonstration that appeared on the 2006 DVD except everything is presented in high-def, which means the transfer from the original DVD, upscaled here, looks a little better than the actual 1998 DVD. Also some of the artifacts from the original transfer aren't as glaring; during one moment where the narrator tries to point out moiré patterns in the old transfer they're actually not as bad here as they were in the same demonstration on the 2006 DVD. Still, the improvements are vast and it's an intriguing comparison and a nice demonstration on how restoration technologies have improved over the years.

Criterion then presents a 3-minute deleted scene which unfortunately lacks audio. They do provide a note on the scene (taken from a novelization that includes it) and explain it's about the retrieval of a ring that one of the aristocrats lost down the toilet or sink. Cool little find and it's in surprisingly decent shape.

The disc then closes with a rather awful American theatrical trailer that actually sucks the fun out of the film.

The real gem, though, is the 64-page booklet that looks to have been entirely pulled over from the 2006 DVD edition. It includes a short essay on the film by Sam Rohdie, but most may be interested in My Rimini, an English translation of a collection of reminisces by Fellini on his hometown, Rimini, recalling school, the atmosphere, and the people, a lot of which made its way into Amarcord.

Overall I enjoyed going through everything on here, though admit a couple of the features (the audio interviews specifically) weren't my cup of tea, but I'm pleased with Criterion's effort and it's a big improvement over the original DVD, which was essentially a barebones release.

A nice looking edition with a strong transfer and decent supplements, it comes with a high recommendation, even if you own one of the previous DVD editions (especially the 1998 edition.) 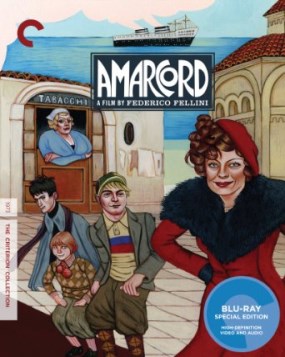