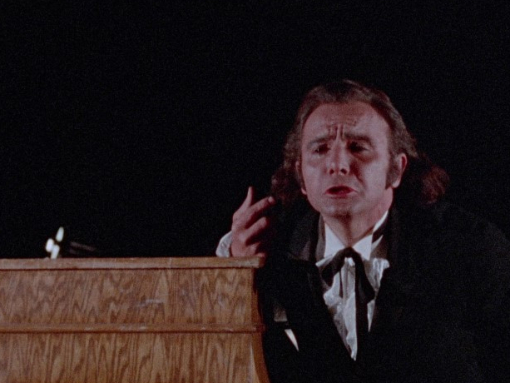 Continuing its mission to unearth the very best in weird and wonderful horror obscura from the golden age of US independent genre moviemaking, Arrow Video is proud to present the long-awaited second volume in its American Horror Project series co-curated by author Stephen Thrower (Nightmare USA: The Untold Story of the Exploitation Independents). Starting off with a little-seen 1970 offering from underrated cult auteur John Hayes (Grave of the Vampire, Garden of the Dead), Dream No Evil is a haunting, moving tale of a young woman's desperate quest to be reunited with her long-lost father - only to find herself drawn into a fantasyland of homicidal madness. Meanwhile, 1976's Dark August stars Academy Award-winner Kim Hunter (A Streetcar Named Desire) in a story of a man pursued by a terrifying and deadly curse in the wake of a hit-and-run accident. Lastly, 1977's Harry Novak-produced The Child is a gloriously delirious slice of horror mayhem in which a young girl raises an army of the dead against the people she holds responsible for her mother's death. With all three films having been newly remastered from the best surviving film elements and appearing here for the first time ever on Blu-ray, alongside a wealth of supplementary material, American Horror Project Volume Two offers up yet another fascinating and blood-chilling foray into the deepest, darkest corners of stars-and-stripes terror.

Arrow Video releases John Hayes’ Dream No Evil on Blu-ray in the aspect ratio of 1.85:1 on a dual-layer disc. The film has been newly restored by Arrow and is exclusively available in the second box set for their American Horror Project series. The new 2K restoration was scanned from the 35mm original camera negative and is encoded at 1080p/24hz here.

The basic premise behind the project is to bring incredibly obscure American independent horror films to light and give them restorations they otherwise would never dream of receiving. Admittedly I was not particularly impressed with the films found within the first volume but I was amazed by the amount of work (and love) that had gone into each individual title, and that same love and effort is evident here.

The presentations for all three films on the previous set were impressive for what they were, held back only by damage to the source materials that was either too extreme or not in any way economical to fix. Their digital presentations, mind you, were exceptional, each one coming off looking as much like a film as possible. The presentation for Dream No Evil outdoes all of those previous films I feel, even though it’s held back (though pretty mildly) by similar source problems. There is some pulsing, minor marks, tram lines, stains, and other little imperfections, with the image even jumping a little bit from time to time, but overall, this damage is infrequent and not anywhere near as severe as what could be found on the other films in the previous set. A majority of the film looks clean and is in spectacular condition.

Colours rarely stand-out, with some reds and pinks popping, but this is mostly thanks to its drab colour scheme to the film. Black levels are decent and can get pretty deep, but details can be limited in the shadows, with some crushing evident. But what I was most shocked by was just how sharp the image is. Detail is extraordinary, beyond what I would have expected for some obscure 70s horror film, especially since at times it can look better than a lot of presentations for newer films. The film is incredibly grainy, and I’m sure some will complain about it, but it’s rendered so well, just about as perfect as one could hope, and it doesn’t come off noisy at all. It looks exceptional.

It was hard to grade this one, and it probably is a 7 in the end, but I was really just stunned by how well this has turned, despite any warts that really just come from the source, so I have no problem giving this an: 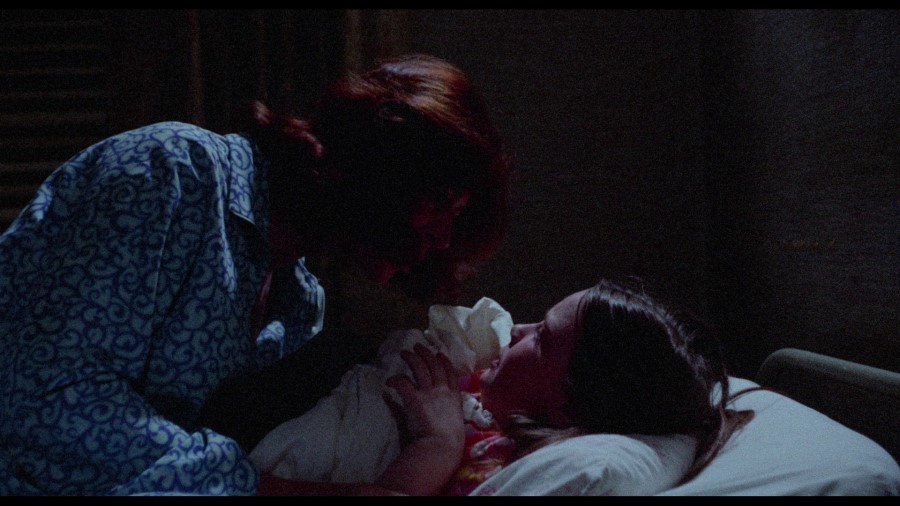 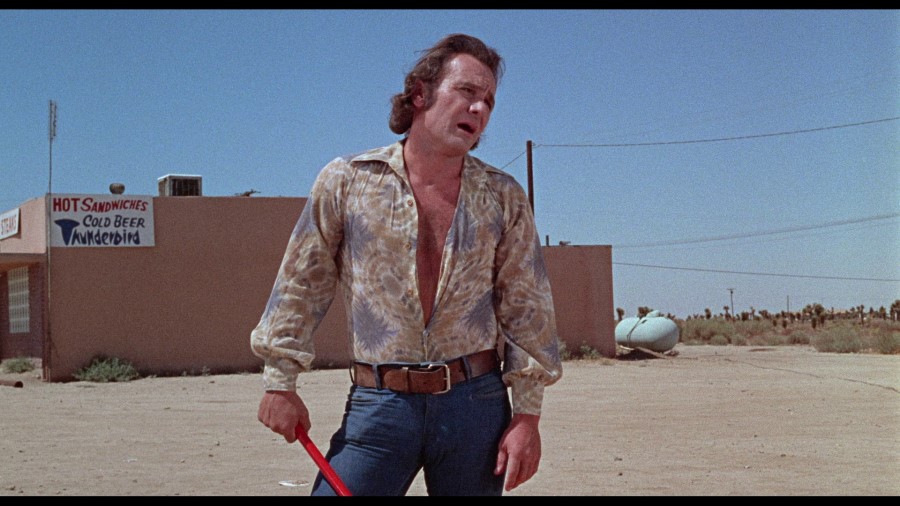 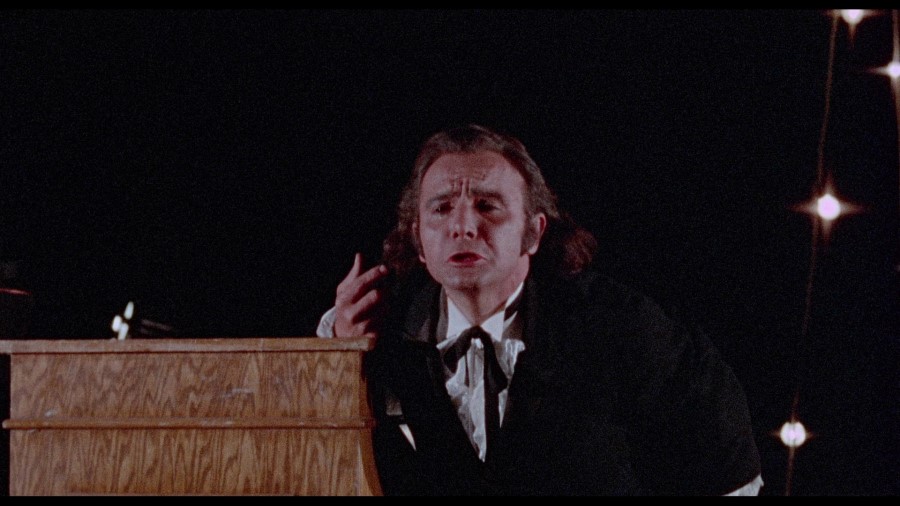 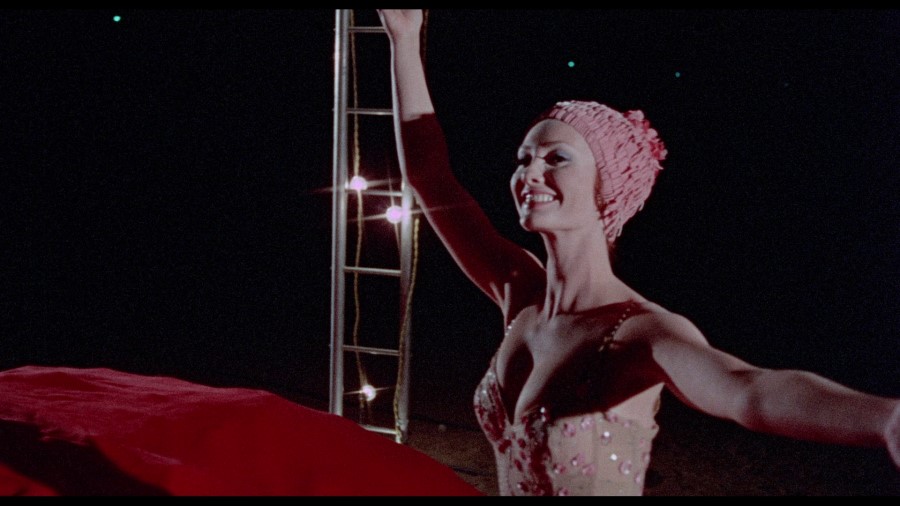 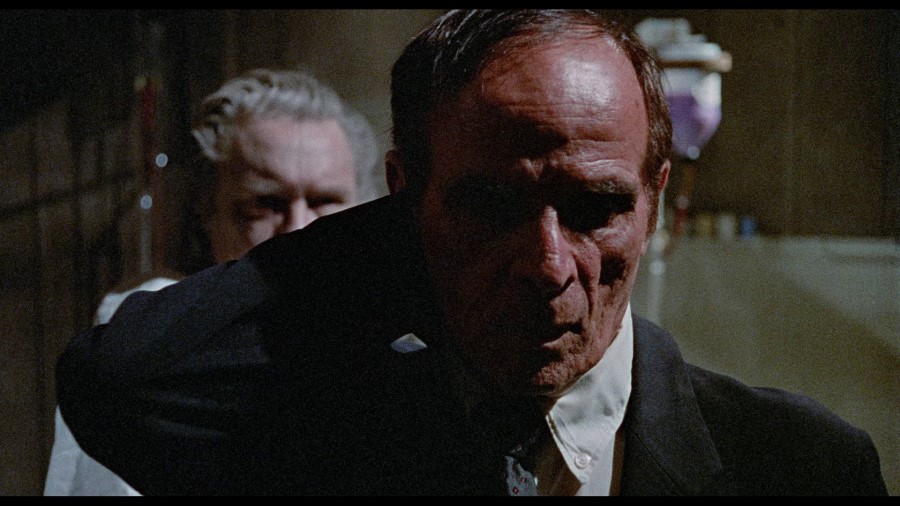 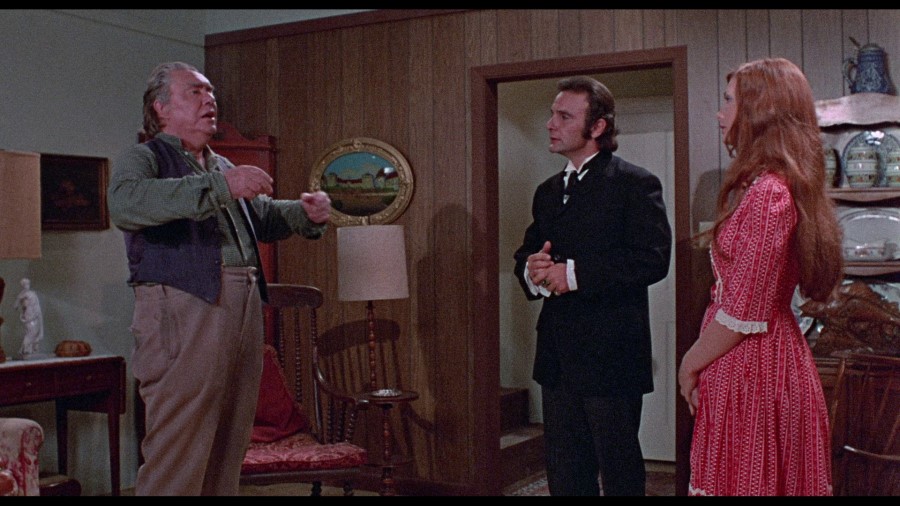 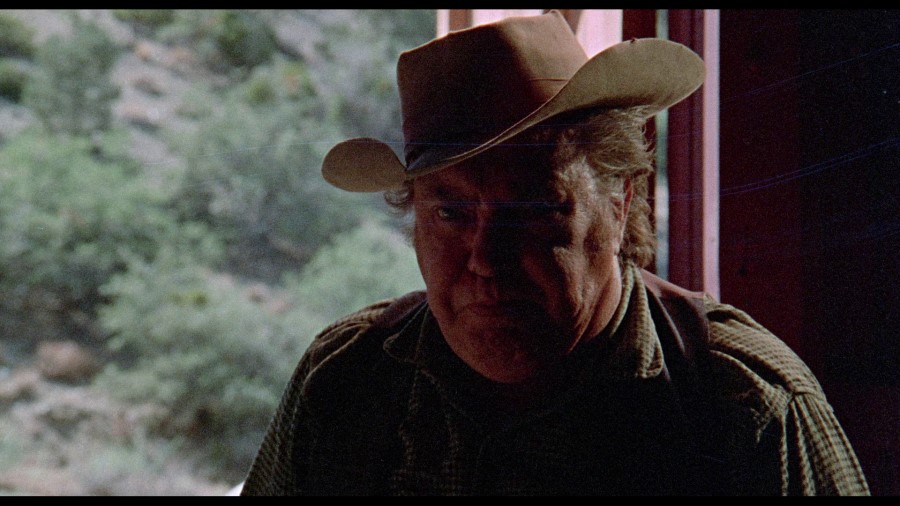 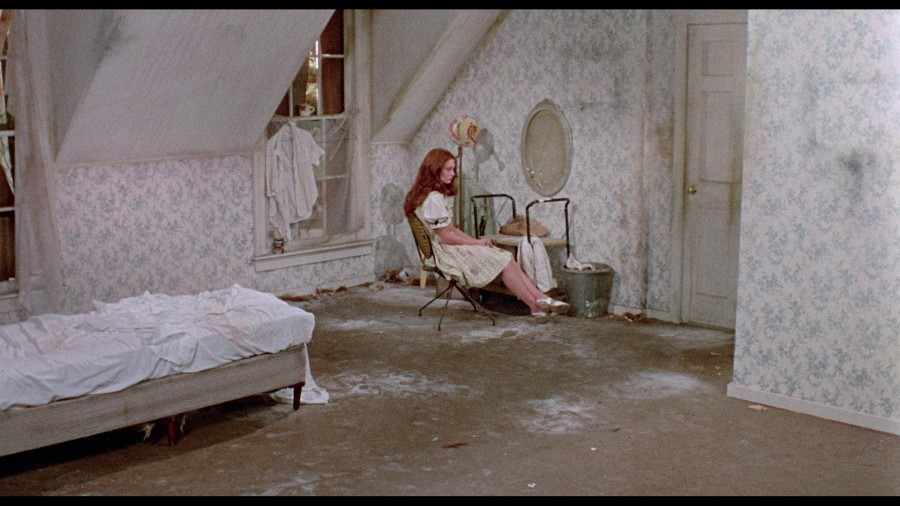 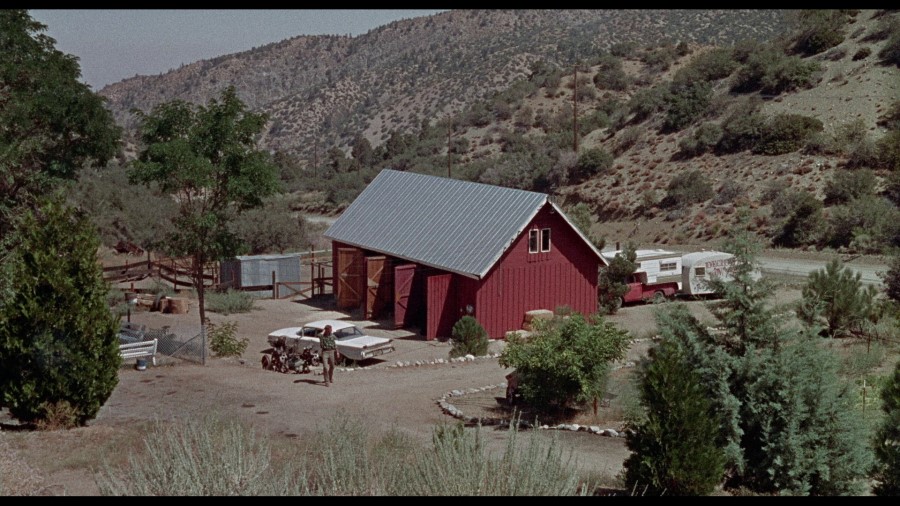 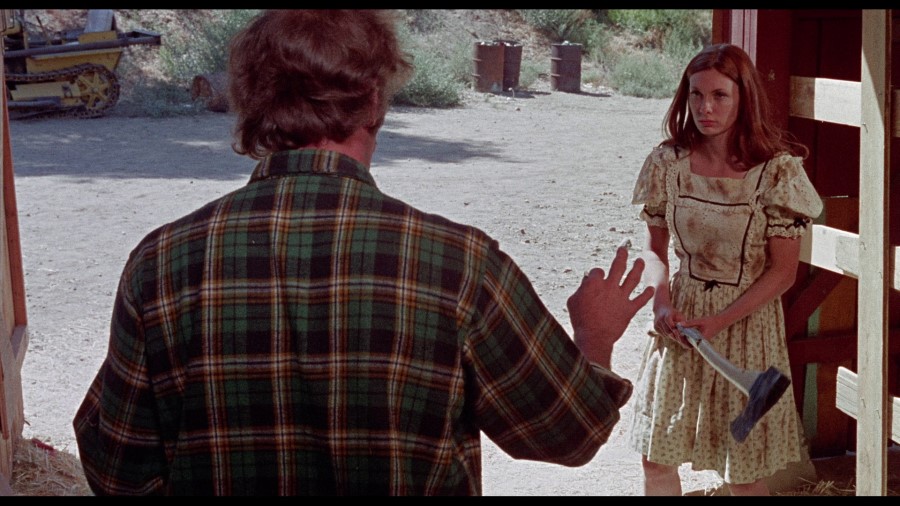 The film’s monaural presentation is delivered in lossless PCM 1.0 mono. This was another pleasant surprise for the film as I was expecting a noisy, weak, and flat mess, and it ended up being nothing of sort. Yes, fidelity is limited but I was still surprised by some of the depth found in it: O’Brien’s deep voice sounds great and a few louder moments stick out. All that really holds it back is the film’s (god-awful) narration, which sounds a little distorted, but I’m sure that’s just how the original recording is.

With the previous set Arrow did add on several supplements for each film, aiming to help in one’s appreciation for them, which worked to an extent, and they continue that trend here. As usual I try not to comment on the films themselves but this is another one of those cases where it’s going to be hard simply because of how excellent the supplements are: I really didn’t care for the film despite its ambitions with its main character, some genuinely good moments, and some absolute lunacy (pimp/undertaker Marc Lawrence anyone?) But there is a lot of genuine love gushing from these supplements and I have to admit that I was looking at the film a little differently after I went through all of them.

And it all starts with an audio commentary from Kat Ellinger and Samm Deighan of the “Daughters of Darkness” Podcast. The track is an absolute delight, one of the best ones I have listened to as of late. The two, disappointed at how director John Hayes isn’t all that well known, go over his filmography (with a focus on Dream No Evil obviously) and what set him apart from other horror/exploitation/sexploitation directors of the time, with focus on specific moments in this film. They lament how little is actually known about Hayes’ personal life outside of what can be gathered from his widow and Rue McClanahan (yes, Blanche Devereaux from Golden Girls, and she had some interesting details to share), but they offer what they can. They also talk about the film in the context of the “female hysteria” movies that were coming out around this time (which includes Repulsion and Images) and like to point out the genre tropes the film refuses to fall into. It’s a non-stop track, very energetic, wonderfully research, and just gushing with love for the film and Hayes’ work. It’s an absolutely fantastic commentary track.

Stephen Thrower (one of the primary drivers behind these sets) then provides a few of his own features, starting with a 9-minute introduction, first going over Hayes’ better known films (like Grave of the Vampire) before he explains what stands out about the film before explaining how it fell through the cracks. But his next feature, Hollywood After Dark, is the gem of this release after the commentary.

This staggeringly researched 34-minute video essay put together by Thrower goes over Hayes’ work all the way up to Dream No Evil, with some later films being brought up throughout. Some films are lost but I’m impressed at what Thrower was able to put together and we get an incredible portrait of a filmmaker, obviously haunted by specific incidents in his life, dealing with it through his films. Thrower also interviewed Rue McClanahan years before her death to talk about Hayes and portions of that audio shows up here, with her recalling the films she worked with him on, as well as a little about their relationship. This is an absolutely wonderful feature, using clips (from DVDs) where it can, and was a satisfying primer and introduction for the director. You will also find the 30-minute audio interview with Rue McClanahan on this disc, which is an absolute treat to listen to. Material found in the essay is of course repeated here but there are also more personal details and McClanahan appears to be overjoyed that someone is so interested in Hayes’ work, which had obviously fallen to the wayside.

An Actor for All Seasons features Chris Poggiali going over actor Edmond O’Brien’s career (also touched on in the commentary) from his noir work to his later western work, and then those out-of-left-field films like Dream No Evil. As suggested by what was covered in the commentary this isn’t the most uplifting subject, O’Brien having a rough go at things later in life thanks to health issues, which called for him to fake being well when working or facing being kicked off set. It’s a good 22-minute feature but it is a noticeably dryer, talking-head feature after the previous, more energetic material.

Altogether this is a really satisfying edition, all on its own outside of the set. It provides an incredible overview of Hayes and his work while also providing passionate arguments to the merits of the film, which I admit won me over a bit. It’s a solid set of features, wonderfully put together.

A great beginning to this new set, Dream No Evil comes with a gorgeous new presentation and a wonderful set of passionate features, with participants determined to up director John Hayes’ profile. 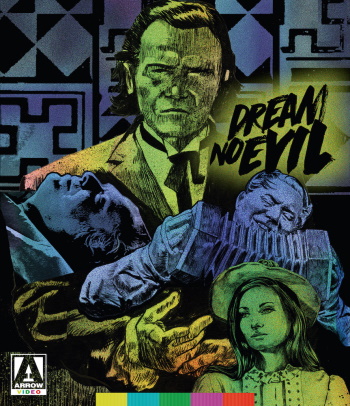