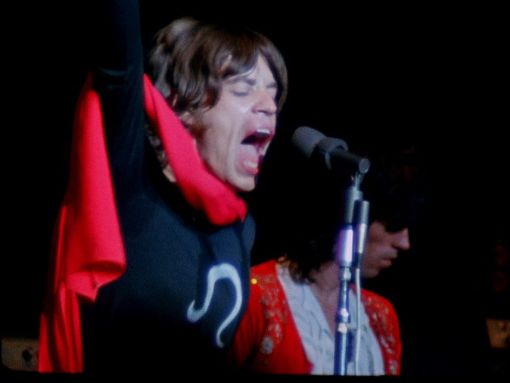 Called the greatest rock film ever made, this landmark documentary follows the Rolling Stones on their notorious 1969 U.S. tour. When three hundred thousand members of the Love Generation collided with a few dozen Hells Angels at San Francisco’s Altamont Speedway, Direct Cinema pioneers David and Albert Maysles and Charlotte Zwerin were there to immortalize on film the bloody slash that transformed a decade’s dreams into disillusionment.

Criterion’s new Blu-ray edition of Gimme Shelter again presents the film in its original aspect ratio of 1.33:1 on this dual-layer Blu-ray disc. The previous DVD edition’s transfer was unfortunately interlaced, like most of the documentary films Criterion released, but thankfully that has been corrected here: The Blu-ray’s transfer is progressive, presented in 1080p.

Not only is that a step up, but just about every other aspect of the transfer is improved upon. Because of the progressive transfer it has fewer artifacts, lacks jaggies, and has better detail. Film grain looks a bit more natural here, but surprisingly, considering the transfer (or at least some of it) is taken from a 35mm blow-up of the 16mm film, grain isn’t all that heavy. Colours look far better, specifically reds, pinks, and purples, and blacks look spot on. Yet while I did say it has better detail than the DVD edition, because of the film’s 16mm source detail isn’t as strong as what most would expect from a Blu-ray and it can look a little blurry and soft in spots, but again this has to do with the source materials; Criterion’s transfer is as sharp as possible.

The print also looks to be in better condition, looking to have been cleaned up a little more. The DVD presented a fairly clean presentation in this regard but the Blu-ray’s source looks to have been given another onceover for debris; there’s surprisingly little, though it does still pop up on occasion.

In all a rather sharp upgrade and Criterion have thankfully done this one right, correcting the issues with the previous DVD edition. Surprisingly sharp and vibrant for a documentary. 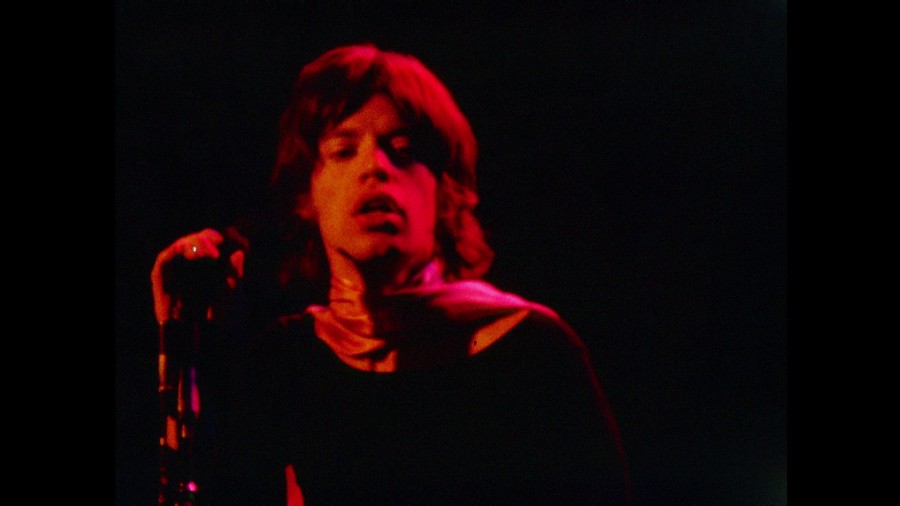 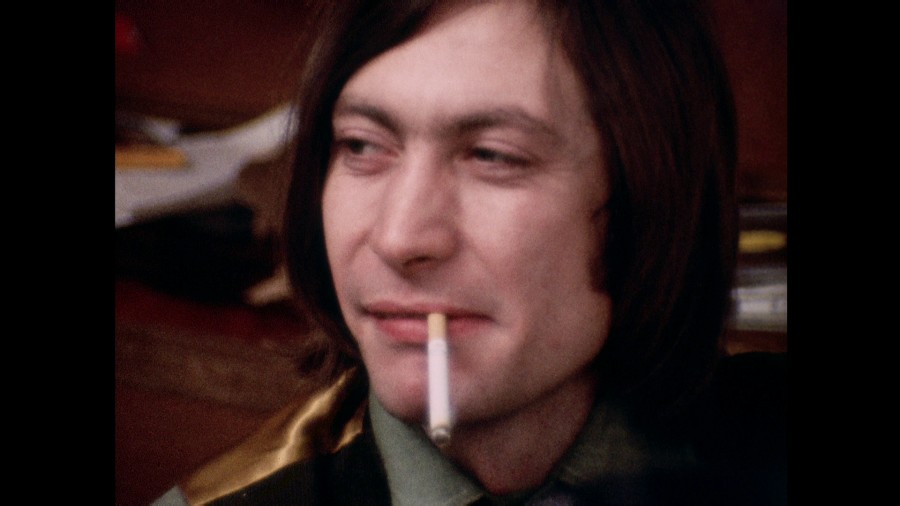 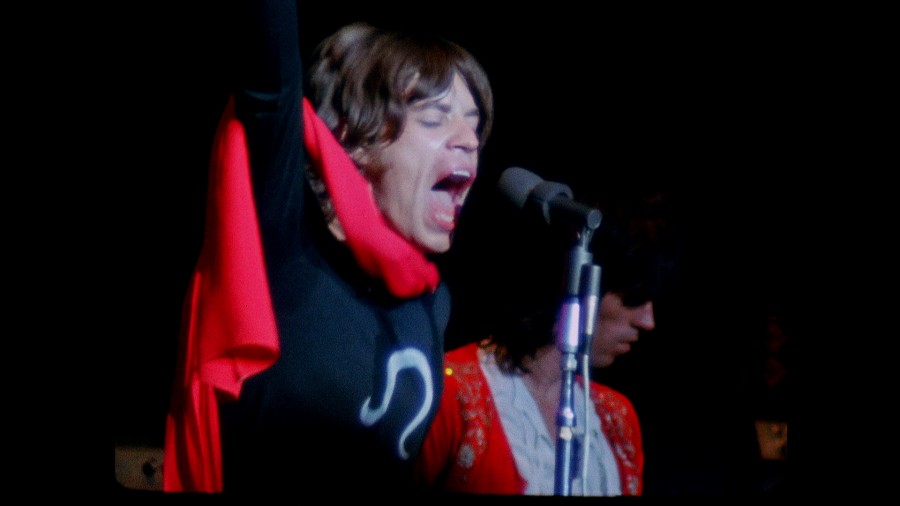 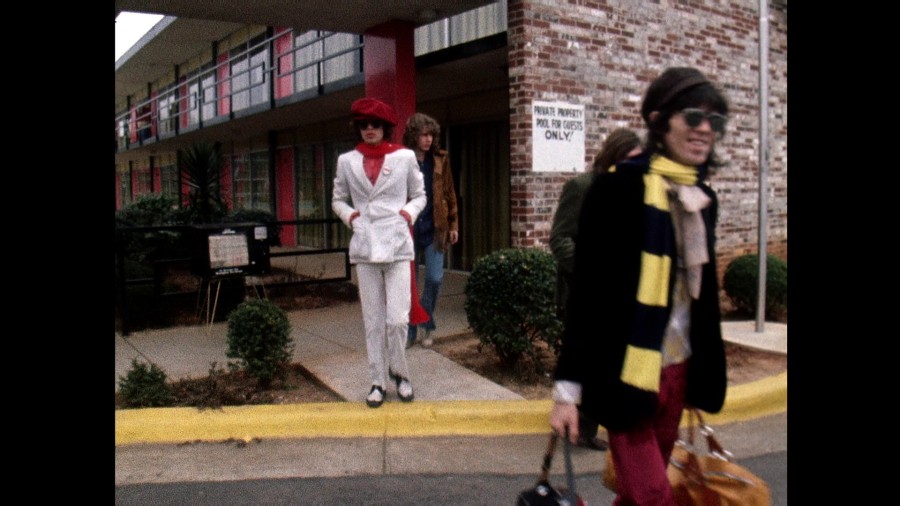 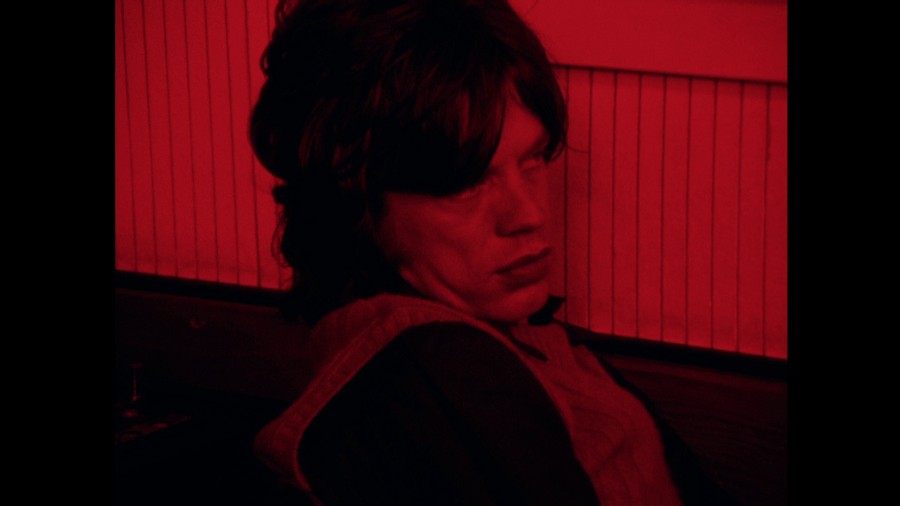 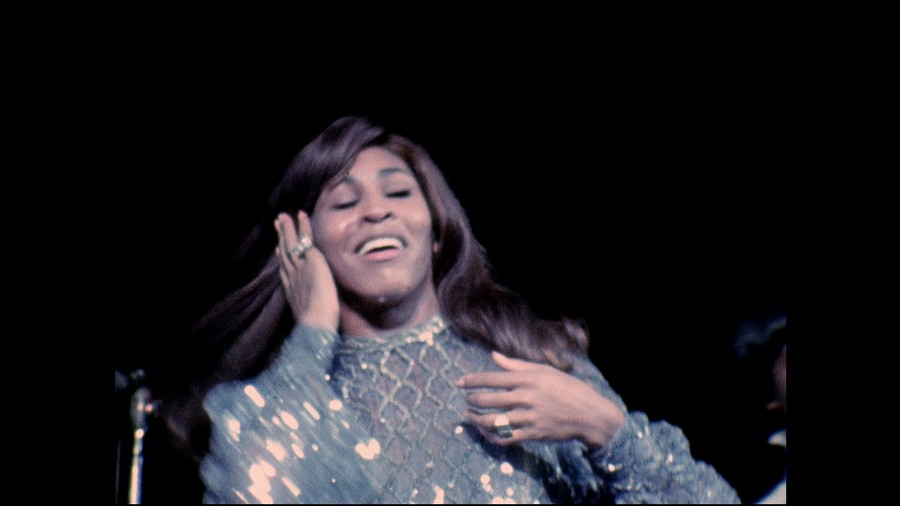 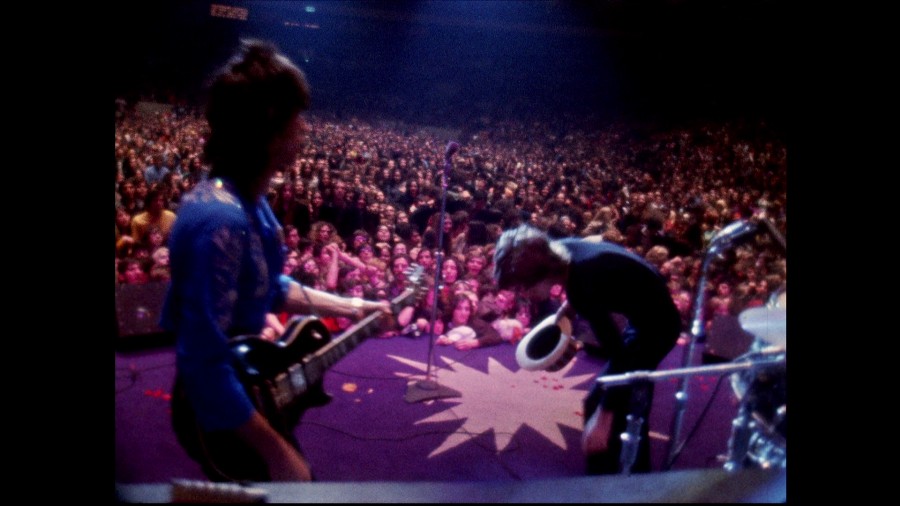 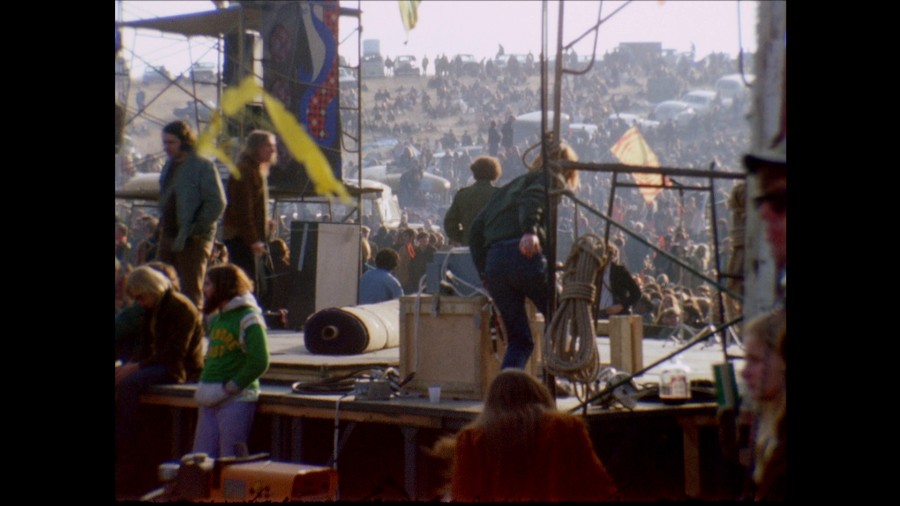 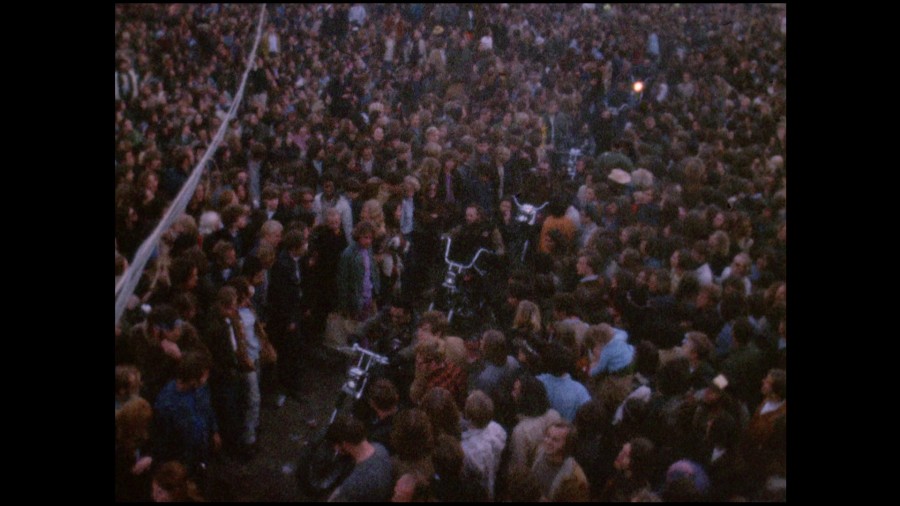 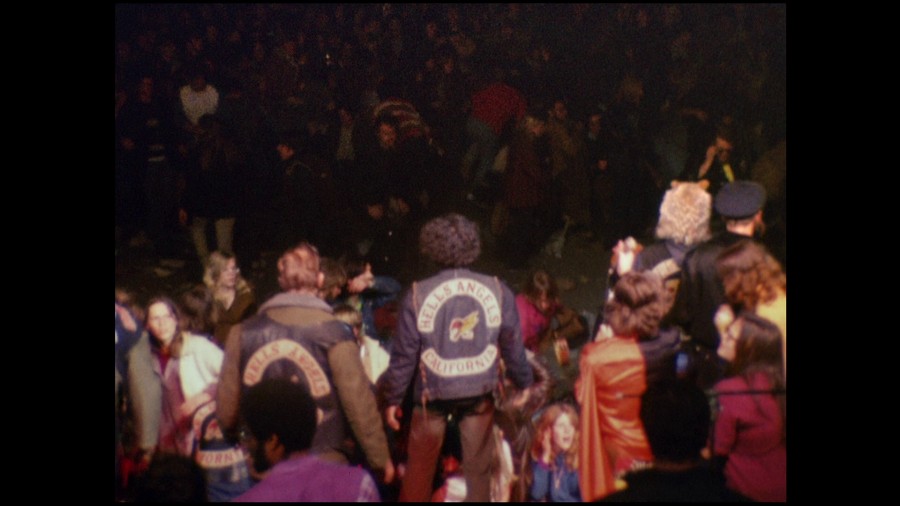 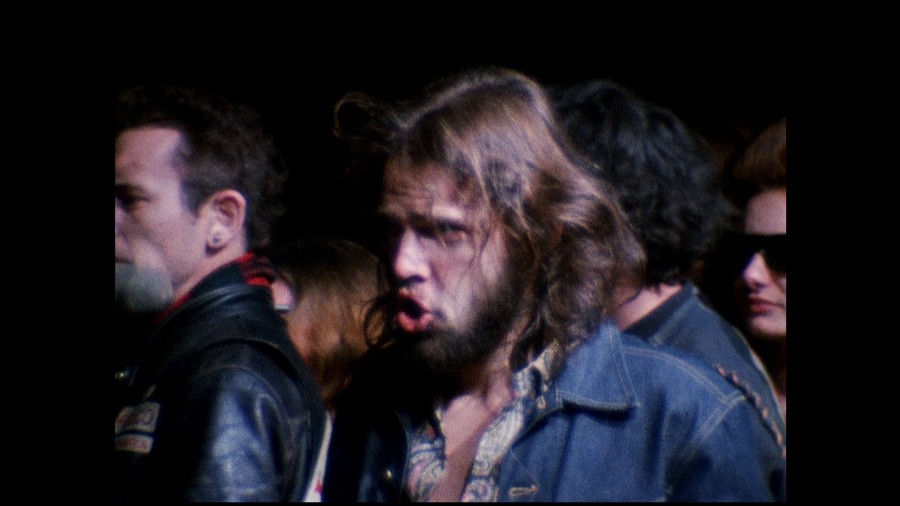 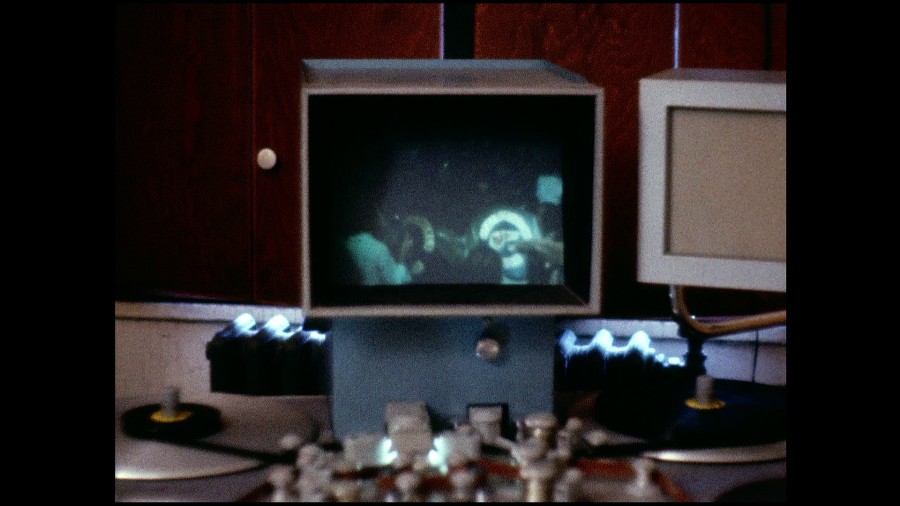 The Blu-ray edition presents two DTS-HD Master Audio tracks, including what I believe is the original 2.0 track and then a remastered 5.1 track.

The DVD presented a DTS track that I was always fairly pleased with, but the new remastered lossless track offers a superior upgrade. Fidelity is so much better, sounding far more natural. Range is excellent, bass is stunning, splits are perfect, and during concert sequences you feel immersed in it with the audience screaming around you. It’s fairly loud but never harsh, which I sometimes felt the DVD’s DTS and Dolby Digital tracks were guilty of. It’s surprisingly effective.

The 2.0 track is weaker and does sound a little flatter. There’s some bass, and the concert sequences do have some decent range to them as well, but when compared to the 5.1 track it’s clearly the weaker of the two. But purists will be happy it’s here and all things considered it still sounds quite good. But for those looking to work their sound system a little better, the 5.1 track is the one to go with.

Most of the features from Criterion’s DVD has been included here, though not everything has been ported over.

First up is an audio commentary featuring Albert Maysles, Charlotte Zwerin, and Stanley Goldstein. In all honesty I had always been disappointed with this track and I’m still disappointed with it after revisiting it on this Blu-ray. The three have all been recorded separately, but this isn’t my issue with it (as usual, Criterion’s editing job is spot-on and feels seamless.) Considering the subject matter within the film I think I’ve always expected more from it and at heart it’s more of a technical commentary. Goldstein and Maysles (Maysles taking up the bulk of the track) talk about how the film came to be, the team being approached by the Stones who wanted a documentary made on their tour. They share some anecdotes (Zwerin, whose interview sounds to have been recorded on rather shoddy material, sharing most of them) like Mick Jagger watching some of the shot footage, Tina Turner and B.B. King (who they never filmed) at Madison Square Garden, and then their observations at Altamont. Unfortunately they never really talk about what happened at Altamont except in passing. They mention incidents but never really address them, and, without giving away the film, there is one incident that is the key to the film that I always figured would get more attention from them. Things happened at that concert that probably shouldn’t have happened (like the Hell’s Angels acting as security) and I was disappointed the three never really address any of it, almost skirting the issue. They mention threats from the Hell’s Angels, and issues getting Mick Jagger to sign off on the film and then getting distribution. They also talk about some of the criticisms against the film, specifically Pauline Kael’s charges, but that’s about it. The commentary is fine enough on a technical level and there are some decent stories, but I just expected more and listening to it again after a few years I still feel the same way.

Much better in covering this area is the next feature, 1969 KSAN Radio Broadcast. 69-minutes of this 89-minute feature is excerpts from a 4-hour show that occurred the day after Altamont. Stefan Ponek, a DJ at the time and one of the participants in the show, offers introductions to certain segments (the introductions were recorded back in 2000 for the original DVD, before his death in 2001.) The excerpts look at the events of Altamont, and the participants try to figure out why things went so wrong at this concert and not at Woodstock. Some interesting theories are thrown around, and call-ins from people who were there do shed some light on it. While you get audience members calling in you also get two call ins from members of Hell’s Angels, including Sonny Barger and someone simply known as Pete. Pete comes off fairly calm and offers what he saw, but Sonny (who takes up the most time in this feature) comes off a little more defensive in his rambling call-in, and as Ponek points out he is probably drunk and/or high. Divided into twelve chapters it’s a great feature offering a rather strong examination of the events at Altamont and what it possibly all means. It’s a great historical record and while it’s disappointing Criterion hasn’t included everything I appreciate them digging this up and including it here.

As a bonus, the remaining 20-minutes present the audio from the press conference with the Rolling Stones in the The Rainbow Room (found in the index under “BONUS: The Rainbow Room.”) Footage from this interview appears in the documentary but this appears to be the entire segment. They talk about their trip to the U.S.A., Vietnam, Ed Sullivan, and anything else that gets thrown at them. I find it interesting that Criterion sort of hides it in another feature, but it’s not too hard to find and is a great piece worth listening to.

18-minutes worth of outtakes are also found in the supplements. These include a mixing session for “Little Queenie”, and then footage of the Stones performing “Oh Carol” and “Prodigal Son.” There is then footage of Mick with Ike and Tina Turner at Madison Square Garden. While the audio drops out a few times it’s good material and worth viewing.

Images From Altamont presents two galleries of photos taken by photographers Bill Owens and Beth Sunflower. Each gallery can be navigated through using the left/right arrows on your remote. They’re decent sized galleries with some good photos of the crowds, the Angels, and the stage. You also get a couple of photos of someone being taken away on a stretcher, though since it looks to have been taking much earlier in the day I don’t think it has to do with the incident that happened with Angels later on.

The supplements then close with three theatrical trailers, including two original trailers (one 2-minutes, the other 30-seconds) and then a 3-minute re-release trailer.

And again like with all Criterion Blu-rays there is the Timeline feature. By pressing the RED button on your remote (or selecting “Timeline” from the menu) a window opens showing a timeline for the film which also points out your current location. You can navigate through the chapters here or switch between the commentary track and the film tracks. You can also bookmark your spot using the GREEN button and return to it from the timeline, or delete your bookmark using the BLUE button. A lot of Blu-rays have this feature but I like Criterion’s rather simple presentation.

The booklet includes a few excellent essays, starting with a short essay on the film by Amy Taubin, what I believe is either an excerpt about Altamont from Stanley Booth’s book The True Adventures of the Rolling Stones or are his brief recollections of it written for this and the DVD’s release, an short bit by Georgia Bergman on the Stones’ American tour, a short essay by Michael Lydon on the 60’s and the lead up to Altamont and how it was the intro to the 70’s, and then finally a nice essay on the film by Godfrey Cheshire, who also looks into Kael’s comments about the film (which I was surprised are missing elsewhere.) Interestingly one thing did not make it from the DVD’s booklet, which is an excerpt from Hell’s Angels member Sonny Barger’s “Let it Bleed: No Sympathy for the Devils of Altamont” where we get his side of the story on what happened at the concert. It’s a rather short article and I’m shocked Criterion didn’t include it since it’s a good counter point to everything else, or at least an interesting one.

There’s also material missing from the disc. Interestingly filmographies for Zwerin and the Maysles are missing, along with the restoration demonstration, though I assume this may be because a different transfer was used for this edition making that demonstration obsolete (though it’s a shame because it was actually one of Criterion’s better ones.) Also absent are trailers for other films by the Maysles, Salesman and Grey Gardens.

It’s a solid release supplement wise. The commentary is disappointing to me but it does offer some decent material. But whatever the commentary fails to cover or examine the KSAN radio program more or less makes up for it. A decent if unspectacular selection of supplements.

A nice improvement over the DVD, the Blu-ray’s new transfer improves upon that edition in many ways, starting with the new progressive transfer. While not all supplements made it over, Criterion left the more important features, the best of which is the KSAN radio program. For those that either own or don’t own the DVD edition, this new Blu-ray is worth picking up. 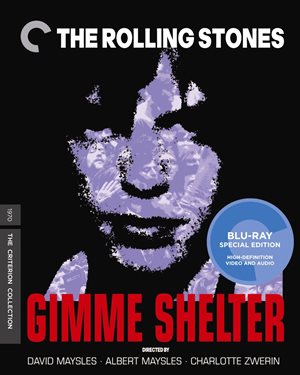