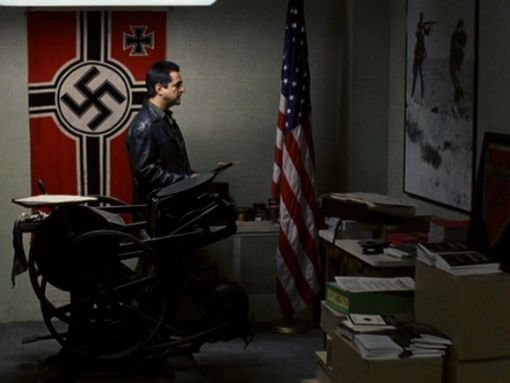 In David Mamet’s cinema, nothing is as it seems—so you better know what you’re looking for. Unfortunately, the protagonist of Mamet’s nightmarish urban odyssey Homicide, inner-city police detective Bobby Gold (Joe Mantegna), is as bewildered about who he is as who (or what) he’s after. Gold’s investigation, following the murder of an elderly Jewish candy-shop owner, leads him down a path of obscure encounters and clues, to a profound reckoning with his own identity. Filled with Mamet’s trademark verbal play and featuring standout supporting performances from William H. Macy, Ving Rhames, and Rebecca Pidgeon, Homicide is a taut, rich work from a true American original.

David Mamet’s Homicide makes its R1 DVD debut through Criterion and is presented in the aspect ratio of 1.85:1 on this dual-layer disc. The image has been enhanced for widescreen televisions.

The transfer on here is certainly disappointing. Restoration looks to have been rather thorough since there is about nothing in the way of damage but the digital transfer itself is a bit of a mess. Other than some odd sequences scattered throughout the entire film looks muddy and unnatural. Sharpness and detail is on and off but as a whole this characteristic never comes off all that impressive, long shots looking especially messy. Shadow delineation is practically non-existent, blacks are never really all that black and a lot of darker sequences come off as blobby messes because of these issues making it hard to see. I can’t say I noticed noise or artifacts but I was a little distracted by other problems.

It’s actually the most disappointing transfer I’ve seen from the company lately and it’s a little frustrating since the film is so new. Definitely not one of their best efforts. 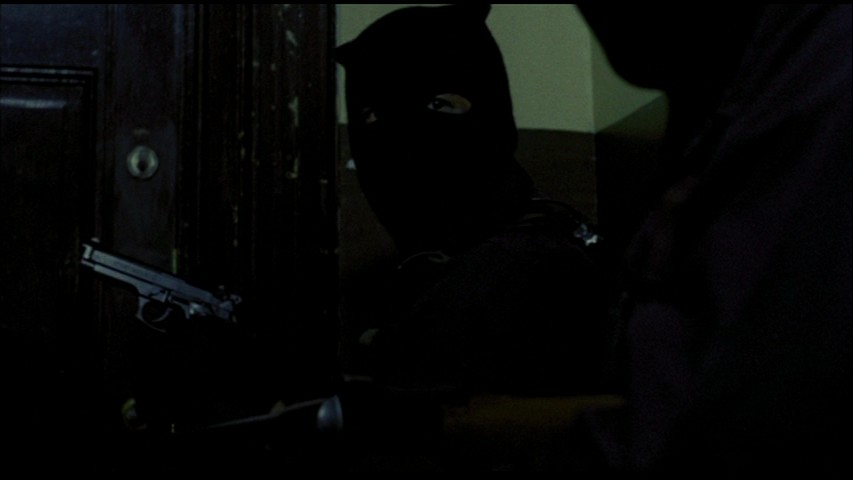 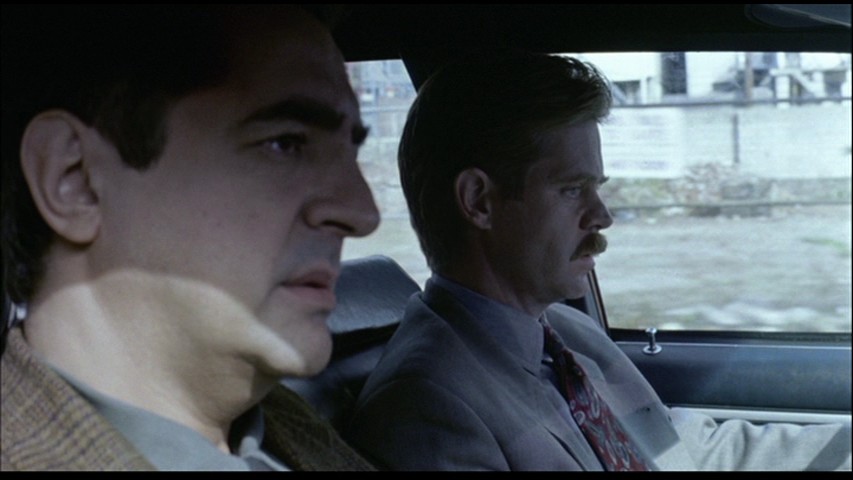 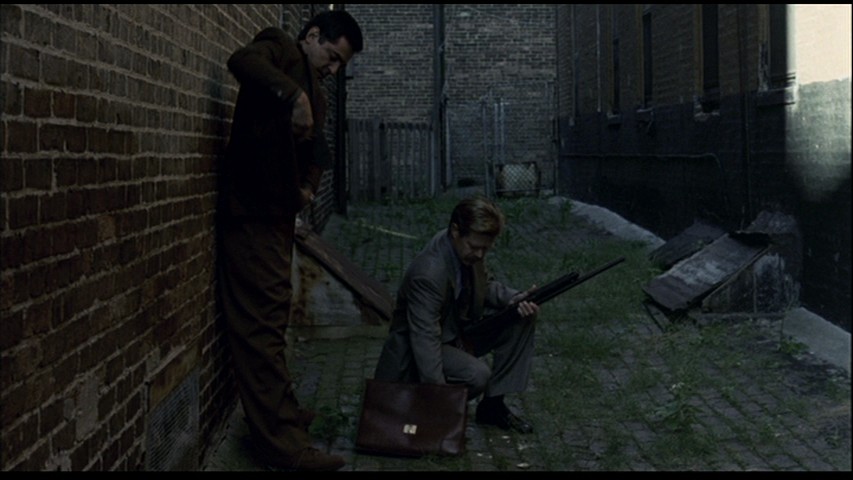 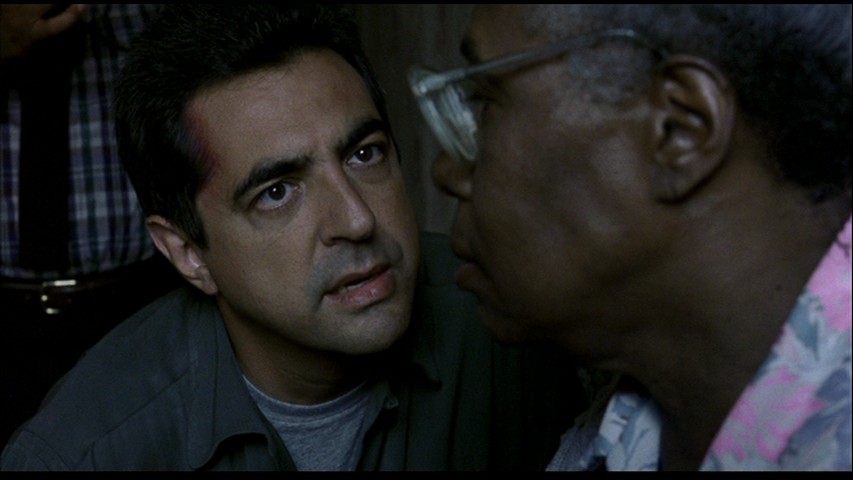 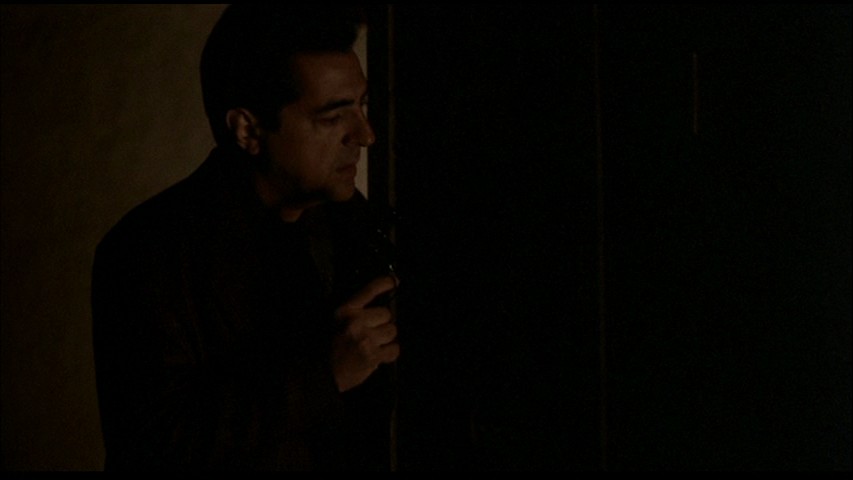 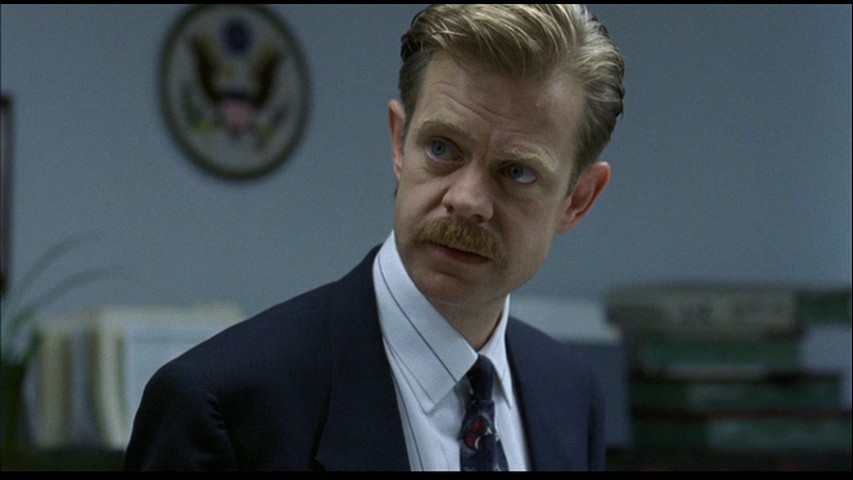 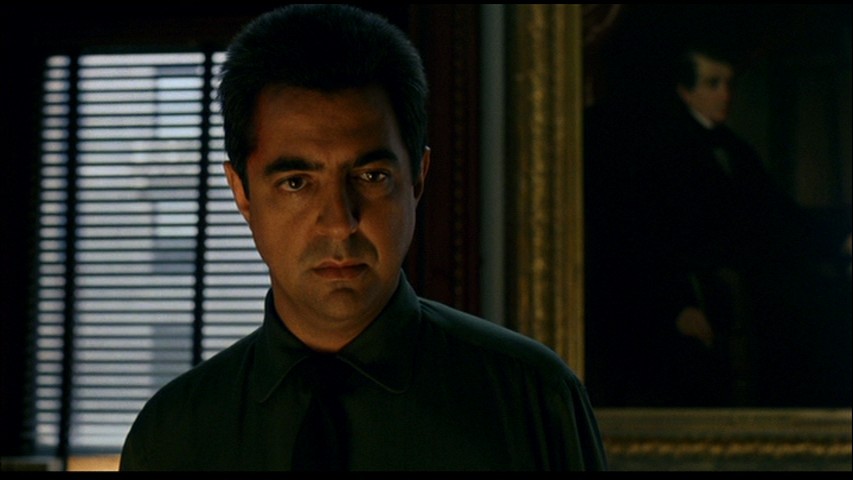 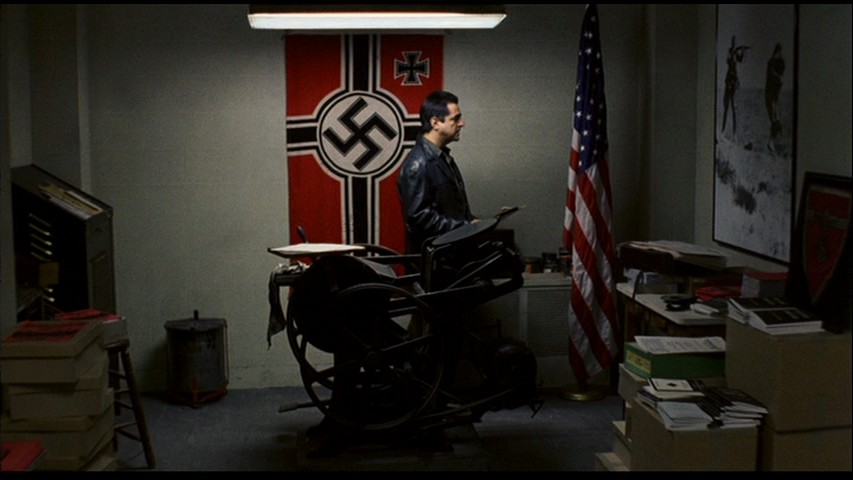 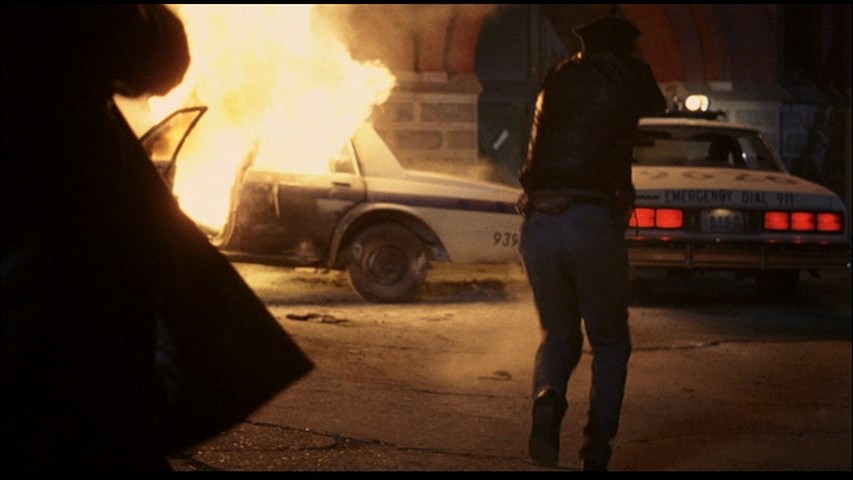 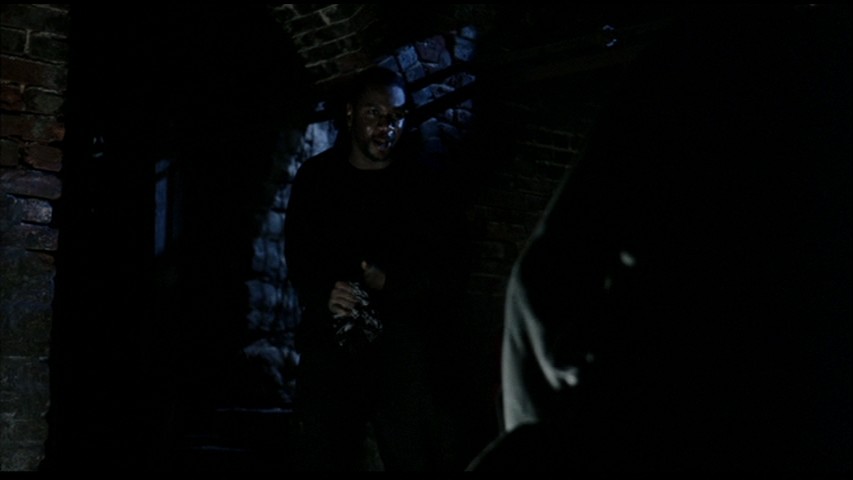 The Dolby Surround track doesn’t prove to be much better. While it has some punch to it and also contains some decent surround work in some sequences it does come off flat and hollow overall, specifically in voices. The occasional explosion and gunshot have some bass to them and can come off loud but that’s about it as the track as a whole comes off fairly weak.

Supplements are slim and really don’t add much value to the package.

First is an audio commentary featuring director David Mamet and actor William H. Macy. I believe the only other Mamet track I’ve listened to is the one he did for Criterion’s House of Games DVD. It was probably a good thing he was accompanied by Ricky Jay in that track because honestly I don’t know if I could find Mamet bearable on his own. Mamet again talks himself up and can’t help but find everything about his film to be wonderful and this stroking of his own ego gets old very quickly. Macy offers some counter balance but not much. The two end up laughing at a lot of lines throughout and then feel they have to comment on them, with Mamet of course declaring what a great line the line in question was. I actually like Mamet’s films and I like his writing and I like his dialogue, as unnatural as it is, and I even like the stilted acting and line deliveries that usually appear in his films (though it’s not as stilted in this film) but I actually can’t stand his commentary tracks (based on this and House of Games at least.) He’s incredibly brazen and it’s hard to listen to someone talk about how unbelievably great they are. Macy even has to joke with him about how he decided to write a book on directing after only directing two films. The track really only becomes good when the two talk about the actual production or other things not related directly to this film, like the current state of indie filmmaking (Mamet figuring the internet might bring indie filmmaking back to life) or talking about acting, or even talking about television shows. There are some good anecdotes, decent discussion about the actors and the family atmosphere on set and the track does clear up the ending (which I admit left me a little baffled as I wasn’t completely sure on one revelation) but Mamet can be off putting and that fact makes it easy to overlook any other good aspects to the track.

A little better is the 21-minute collection of interviews found under ”Invent Nothing, Deny Nothing” – Five Guys From Mamet’s Homicide. This was made exclusively for Criterion and features Joe Mantegna, Ricky Jay, Steven Goldstein, J. J. Johnston, and Jack Wallace. These actors appear in most of Mamet’s work and they’re a close group and the discussions within (mixed in with clips from Homicide) focus primarily on that. While they cover their work with Mamet as a whole they also get into their roles for Homicide and how Mamet writes roles especially for them, which take advantage of their own skill set as performers. They also talk about the dialogue but I have to find it amusing that Wallace refuses to repeat curse words from Mamet’s dialogue during the interview, despite the F-bomb being dropped in the clips that play throughout the piece. Jay also talks a bit about his martial arts training helped him in this film (this is also mentioned in the commentary where Macy and Mamet somewhat question his training.) This was better than the commentary track but feels too brief. It’s a shame these guys couldn’t also appear in the track.

An odd addition for Criterion (I don’t recall one since their DVD for Armageddon) is a gag reel running about 6-minutes. Gags were mentioned in the commentary and this collection of short clips features some amusing ones, made up of flubs and pranks. Not required viewing but there’s a couple of good bits and it highlights the loose, fun, and close work environment.

The supplements then conclude with 4 TV Spots running 3 and a half minutes. Three of them are short spots, but the last one feels closer to a theatrical trailer.

The release then includes a booklet with an essay by Stuart Klawans, which is an okay read covering Mamet’s career and how Homicide fits in his filmography.

A little sparse and I don’t know if it’s worth the higher price point. I found the commentary obnoxious overall and the other supplements, while fine, don’t make up for it. Not a thrilling collection.

This is my first time with this film and of his films that I’ve seen it’s certainly the most different. It has his usual red herrings and twists though they’re slight in this case and the focus is certainly more on Mantegna’s character and his struggles. There’s some great things in here and it’s one I’ll certainly revisit. But I have to express my extreme disappointment in this release, which lets me down in every area. The picture is muddy and unimpressive, the sound is flat overall, and the commentary was, well, not very good. Not one I can wholly recommend. 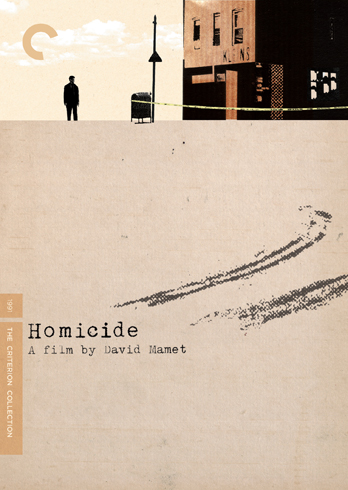