Disc 1, Smiles of a Summer Night Disc 2, Crisis / A Ship to India Disc 3, Wild Strawberries Disc 4, To Joy / Summer Interlude Disc 5, Summer with Monika Disc 6, Dreams / A Lesson in Love Disc 7, Scenes from a Marriage (Television Version) Disc 8, Scenes from a Marriage (Theatrical Version) / Saraband Disc 9, From the Life of Marionettes / Hour of the Wolf Disc 10, Shame / The Passion of Anna Disc 11, Fårö Document / Fårö Document 1979 Disc 12, Through a Glass Darkly Disc 13, Winter Light Disc 14, The Silence Disc 15, The Virgin Spring Disc 16, The Seventh Seal Disc 17, The Devil's Eye / All These Women Disc 18, Sawdust and Tinsel / The Rite Disc 19, The Magician Disc 20, The Magic Flute / After the Rehearsal 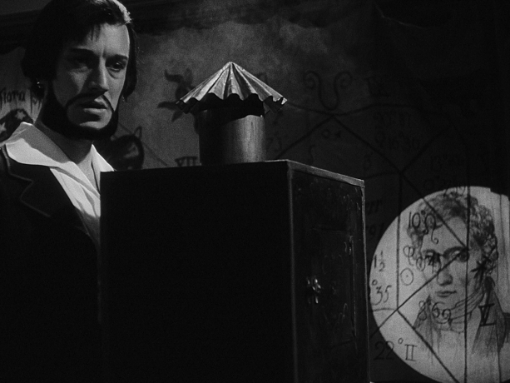 In honor of Ingmar Bergman’s one-hundredth birthday, the Criterion Collection is proud to present the most comprehensive collection of his films ever released on home video. One of the most revelatory voices to emerge from the postwar explosion of international art-house cinema, Bergman was a master storyteller who startled the world with his stark intensity and naked pursuit of the most profound metaphysical and spiritual questions. The struggles of faith and morality, the nature of dreams, and the agonies and ecstasies of human relationships—Bergman explored these subjects in films ranging from comedies whose lightness and complexity belie their brooding hearts to groundbreaking formal experiments and excruciatingly intimate explorations of family life.

Arranged as a film festival with opening and closing nights bookending double features and centerpieces, this selection spans six decades and thirty-nine films—including such celebrated classics as The Seventh Seal, Persona, and Fanny and Alexander alongside previously unavailable works like Dreams, The Rite, and Brink of Life. Accompanied by a 248-page book with essays on each program, as well as by more than thirty hours of supplemental features, Ingmar Bergman’s Cinema traces themes and images across Bergman’s career, blazing trails through the master’s unequaled body of work for longtime fans and newcomers alike.

The 19th disc in in Criterion’s box set Ingmar Bergman’s Cinema is dedicated solely to The Magician, which is presented on this dual-layer disc in the aspect ratio 1.33:1. The film is encoded at 1080p/24hz and comes from a high-definition restoration, scanned originally from a 35mm fine-grain master positive.

Criterion appears to be porting their 2010 Blu-ray edition of the film over to this disc, simply changing the menus out (though I should note that it does not save the bookmarks between discs). I was expecting a different encode, at least, but that also doesn’t appear to be the case: comparing the two they look exactly the same, from the encode, right down to the same wear around the edges of the screen, and the occasional jitter and flicker.

Though I will say the digital presentation holds up remarkably well all these years later, there are some dated aspects. Grain is visible, but it can have a bit of a sharpened look. It’s not glaring, but this gives it more of a digital look. Contrast can also look a little off, boosted a bit, which makes the whites a more intense and the blacks darker, leading to grayscale that doesn’t transition all that smoothly. It could be the intentional look, but this just gives it a more dated look in the end.

Having said that, though, it’s still a pleasant picture. Detail is strong, with textures looking natural and clean, and the image stays sharp throughout. I also didn’t detect any glaring digital anomalies, it’s just that the grain isn’t as well defined as some of the more recent restorations in the set.

The film could definitely use a fresh new scan and restoration, and I’m a little bewildered as to why Svensk wouldn’t feel the need (after all, they did another 2K restoration for Summer Interlude after having already done why just a few years before), but it will do for now. 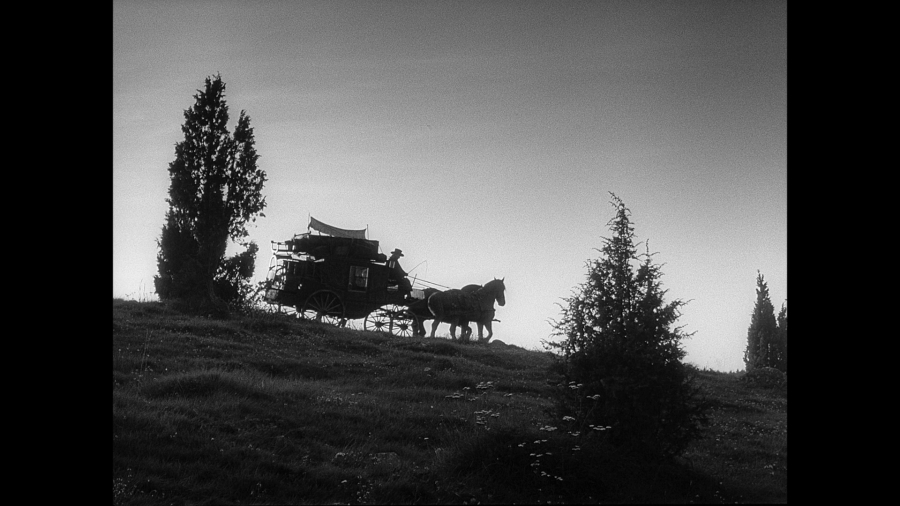 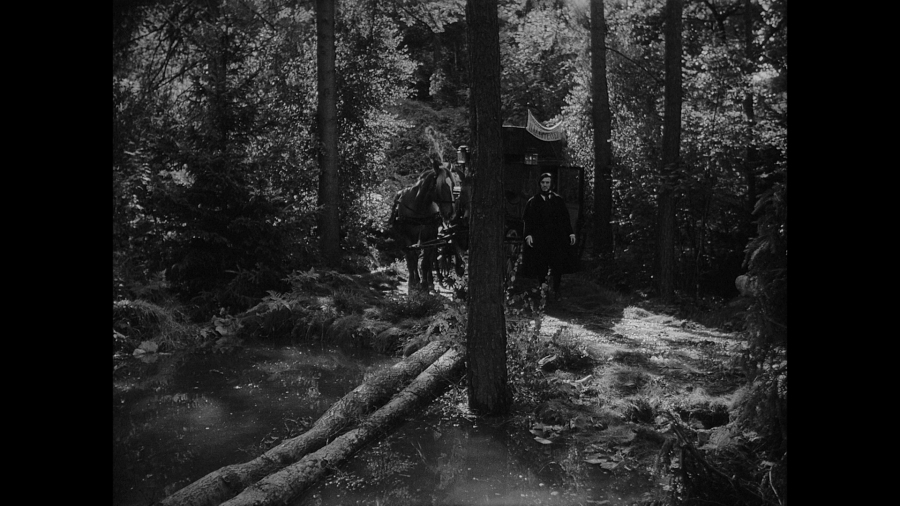 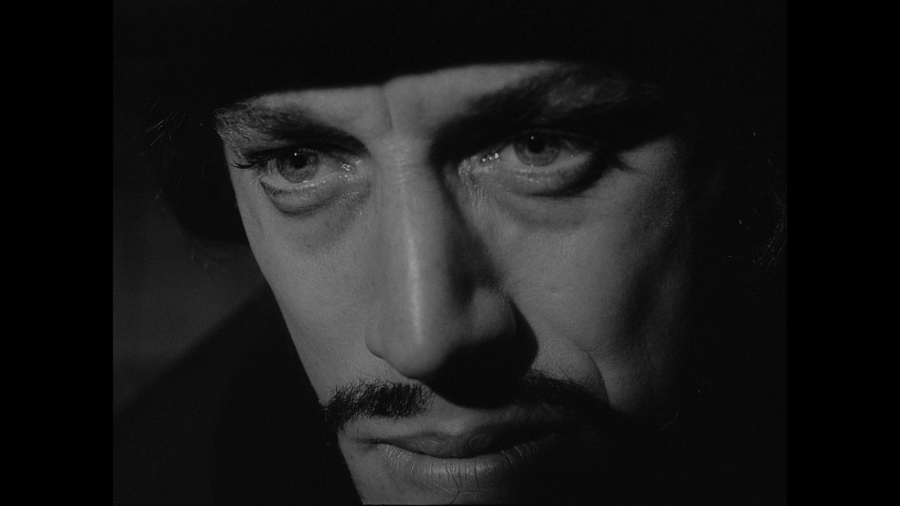 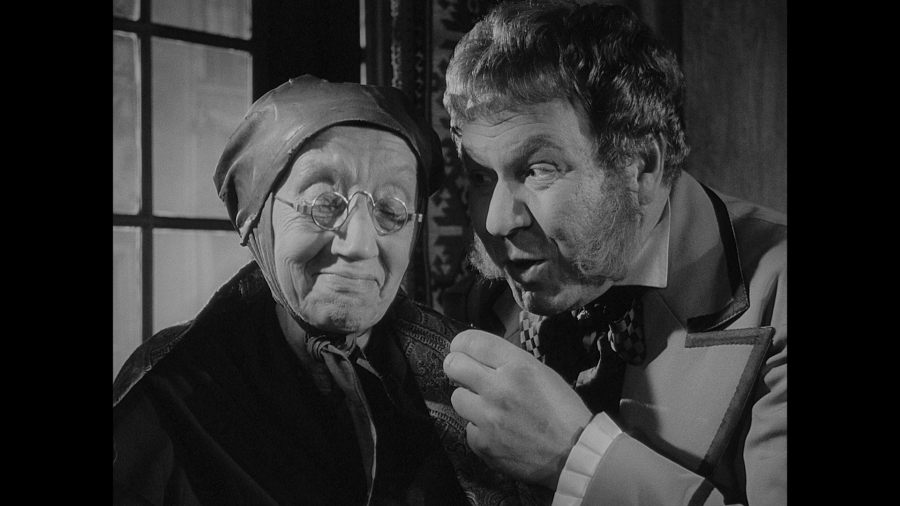 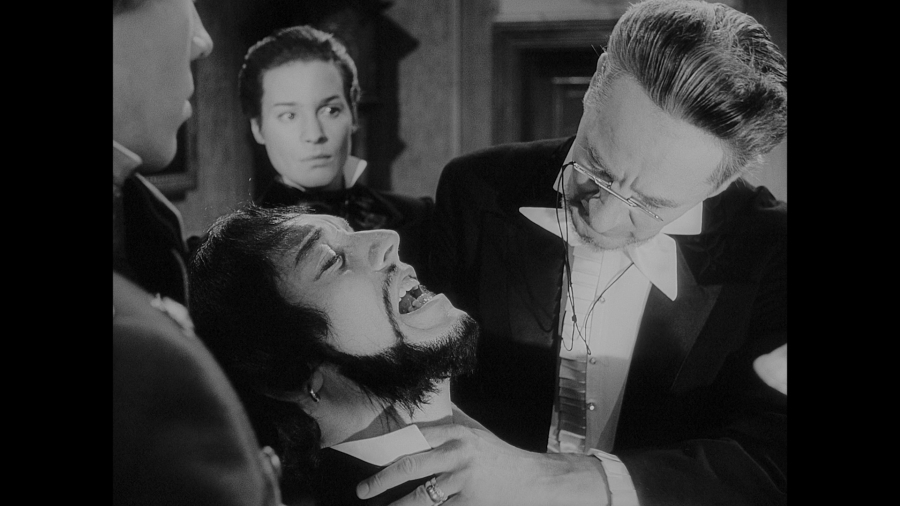 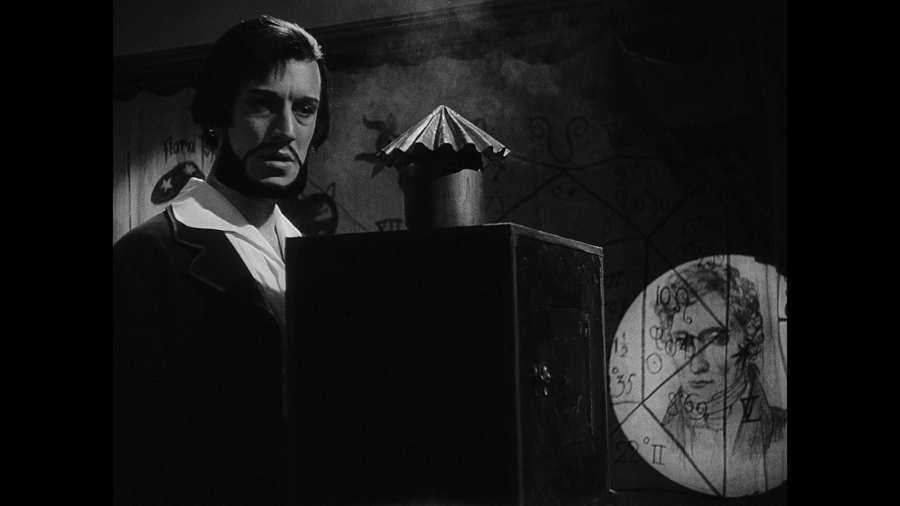 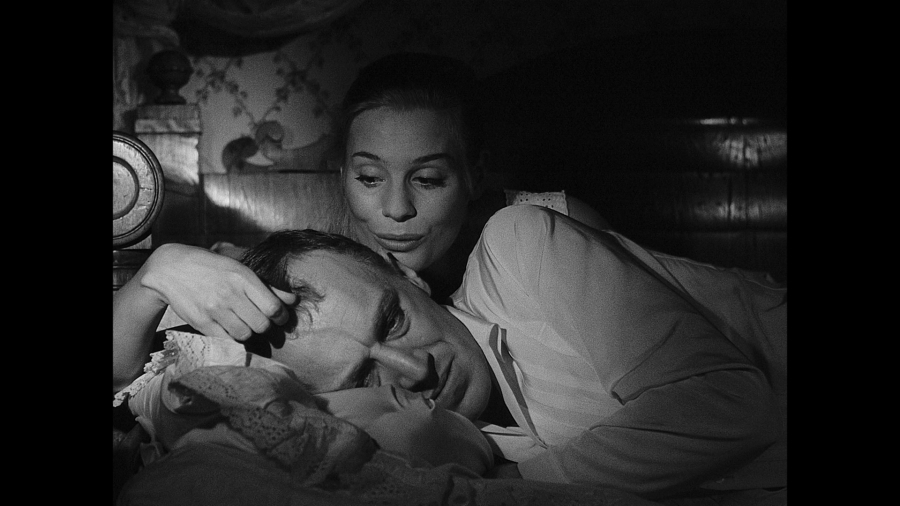 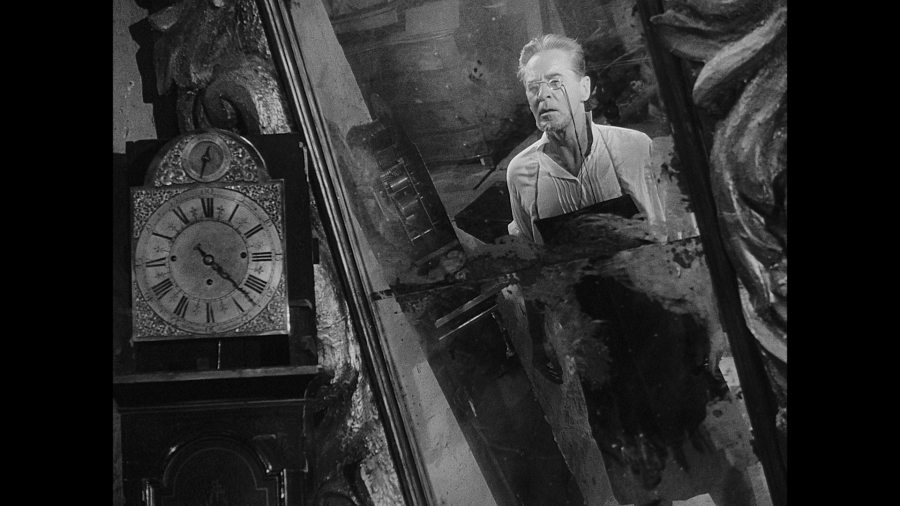 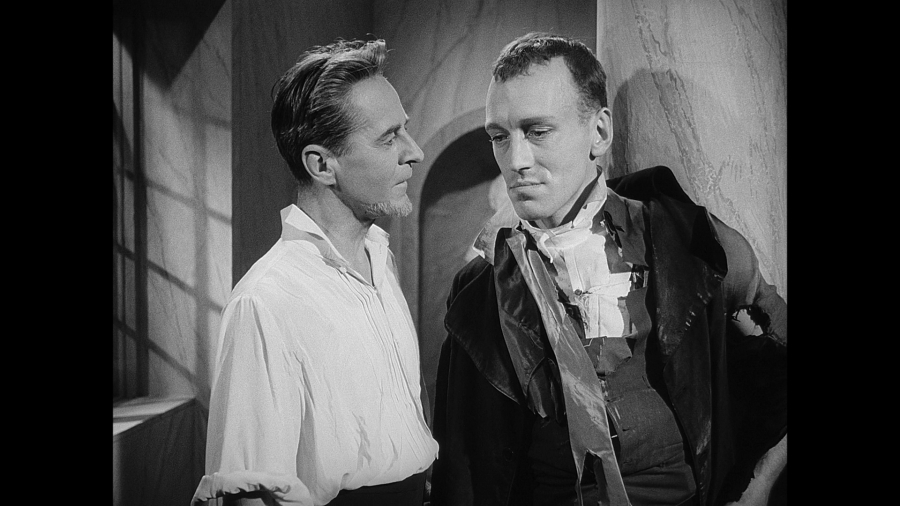 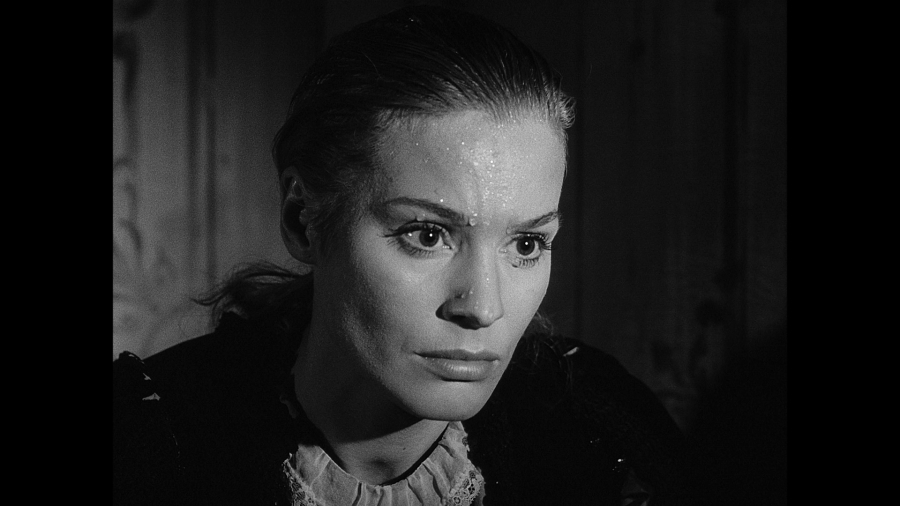 The lossless PCM 1.0 monaural presentation of the film’s Swedish soundtrack also sounds the same as what was available on the previous Blu-ray. Dialogue sounds fine, and the track is clean, but there are times that can get a bit edgy, specifically with the film’s music, most notable during the film’s final moments of the film, where the music gives more a humourous edge.

All on-disc supplements from Criterion’s previous release for The Magician have been ported over, though it’s a disappointingly sparse amount.

Things start off again with a section around interviews with Bergman, the first a Swedish television interview, recorded in 1967. It runs only 3-and-a-half minutes and features Bergman talking a little about Persona and then The Magician, explaining how the film was about the relationship between the artist and his audience, fitting in a story about a Chinese woodworker to bring it together.

The next interview found here is a great one between Bergman and filmmakers Olivier Assayas and Stig Björkman. This 20-minute piece, which is in English (but thankfully still presents English subtitles because it’s impossible to hear at times), focuses primarily on Bergman’s early life and his stage work, including his beginnings as a play writer. They move on to film where Bergman talks about some of his favourite French directors and their films, Pepe le moko being a personal favourite of his. It then closes in the last couple minutes with the three talking a little about The Magician, which Bergman recalls as a fun shoot.

The final disc supplement is a 15-minute video essay by Peter Cowie, who has also done essays and other work for previous Criterion editions of Bergman’s films, including an excellent essay that appeared on both editions of The Seventh Seal. This essay focuses solely on The Magician, with some minor mentions of other films in comparison, and the themes that are found in it, such as the themes of art and science, but primarily how the film represents the relationship between Bergman and his audience, with the character of Vogler (the magician played by Max von Sydow) representing the director. He breaks down a few sequences and looks at the symbolism and gestures within them. An excellent piece, peeling back some of the layers to the film that are not readily evident.

The previous Blu-ray included a thick booklet and some of its content is found in the set’s 247-page book. Geoff Andrew’s essay appears here as does an excerpt from Bergman’s book Images about The Magician, though it’s further truncated in comparison to what was found in the previous booklet. An appreciation by filmmaker Olivier Assayas does not seem to appear here.

The material, in the end, is still good, but still feels very sparse.

Criterion is simply porting over their old Blu-ray, so nothing new here: same (fine) presentation and same (small) set of features. 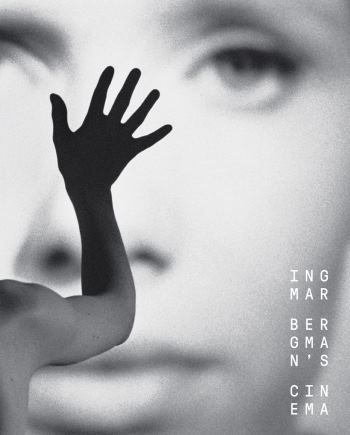 Smiles of a Summer Night (Blu-ray)