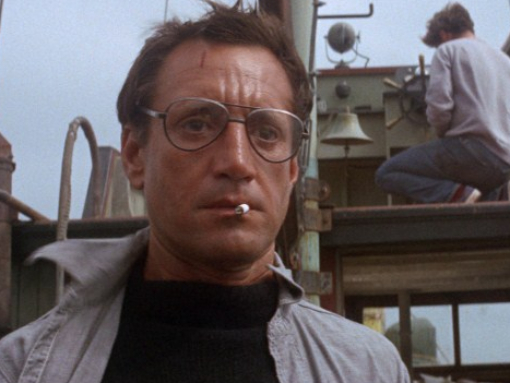 Directed by Academy Award winner Steven Spielberg, Jaws set the standard for edge-of-your seat suspense quickly becoming a cultural phenomenon and forever changing the movie industry. When the seaside community of Amity finds itself under attack by a dangerous great white shark, the town's chief of police (Roy Scheider), a young marine biologist (Richard Dreyfuss) and a grizzled shark hunter (Robert Shaw) embark on a desperate quest to destroy the beast before it strikes again. Featuring an unforgettable score that evokes pure terror, Jaws remains one of the most influential and gripping adventures in motion picture history.

Steven Spielberg’s Jaws makes its Blu-ray debut from Universal Home Entertainment in its original aspect ratio of 2.35:1 on a dual-layer disc, with a newly restored 1080p/24hz high-definition digital transfer.

As the packaging and the advertising has pointed out we get an entirely new restoration and transfer for this Blu-ray edition, approved by Spielberg. For those fearing a real botched job from Universal, who has a tendency to “over clean” their transfers for catalogue titles, they can put those fears mostly to rest. Yes, I suspect noise reduction has been applied to remove film grain, if only mildly; you can still make out grain faintly in areas, and it does get a little heavier in some darker sequences. But thankfully textures and depth remain and I can’t say anything ever looks waxy or “polished”. Colours are striking, really popping off of the screen and I don’t recall them ever looking this good previously. Detail is also crisp, the opening underwater shots especially impressive, delivering details I don’t recall before. The film really looks as though it could have been shot recently as it’s presented here.

There are some fuzzy moments I blame more on what are more than likely optical effects or possibly matte paintings, but as a whole the image remains crisp and heavily detailed, as best presented in Quint’s sweaters and the many imperfections on his boat. Of special note, in reference to how the improved resolution helps, is one sequence in the latter half of the film where you see a “shooting star” in the sky over Scheider’s shoulder, which I do not recall ever seeing previously on any home video release. I actually went to Google this and as I found this has always been there (and was real, just happening to be caught on film) so I can only assume the limited resolution from previous home video releases hid this from me. Now it’s clear as day and I’m stunned I’ve never noticed this little detail before.

The restoration has been vigorous and I honestly don’t recall a single blemish appearing. I also don’t recall any sort of artifact in the digital transfer, no edge-enhancement, no compression noise, nothing. There’s been some tweaking and a little bit of scrubbing, but nothing problematic comes up because of it. In the end the transfer still retains a filmic look, making this one of the better transfers to come from Universal in a long while. 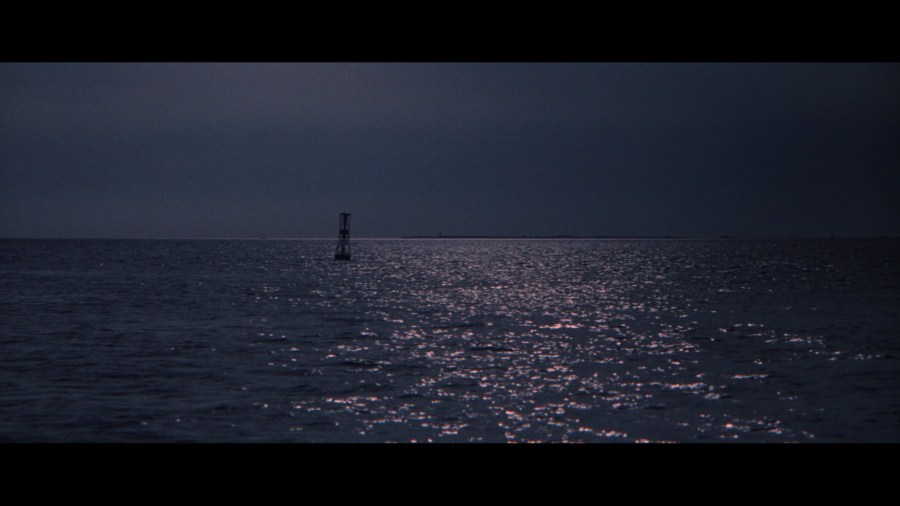 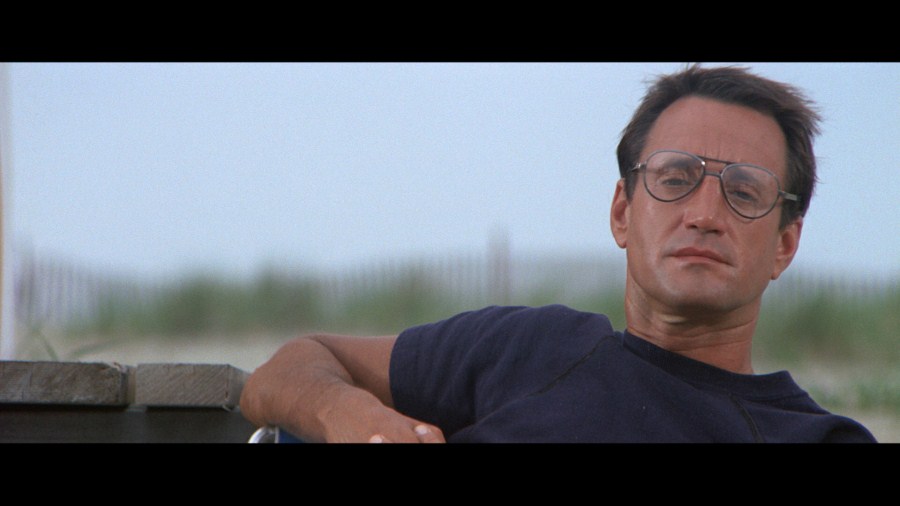 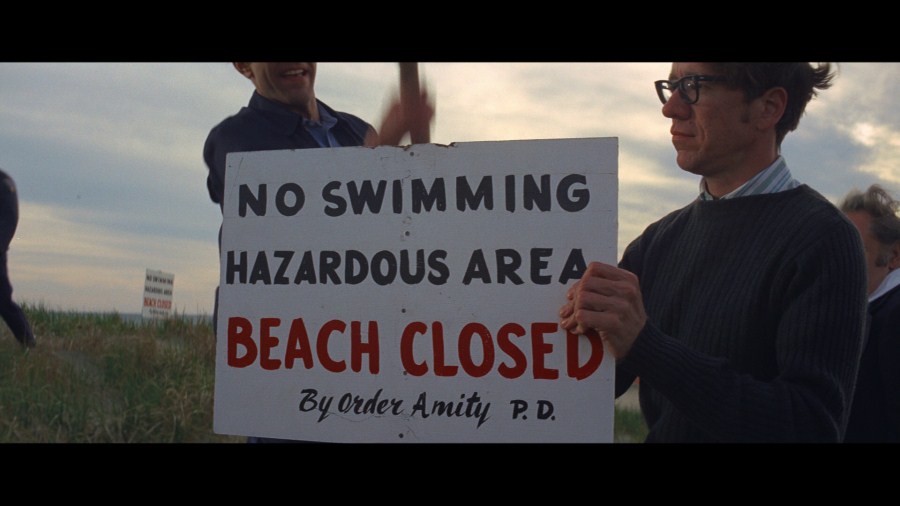 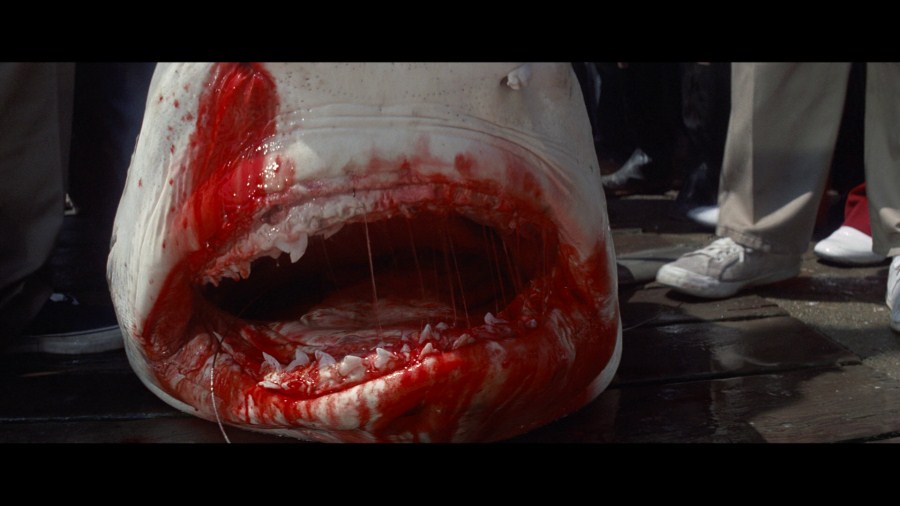 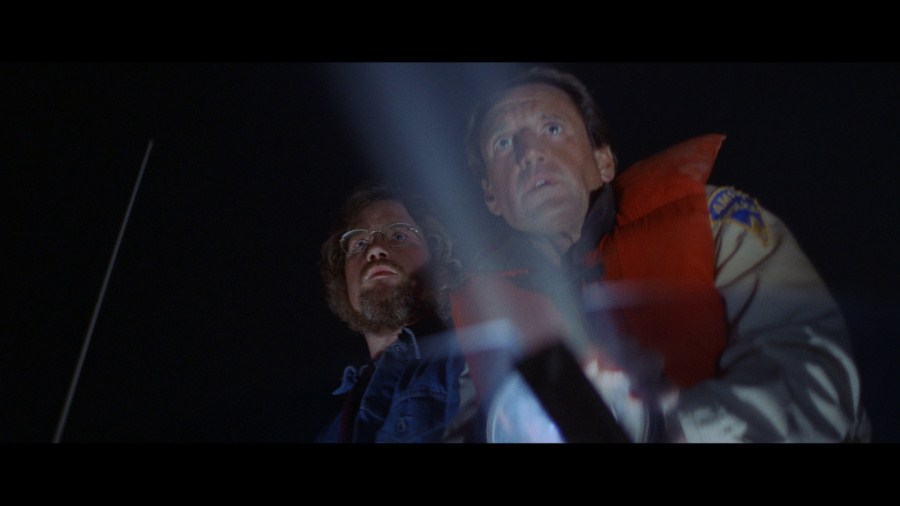 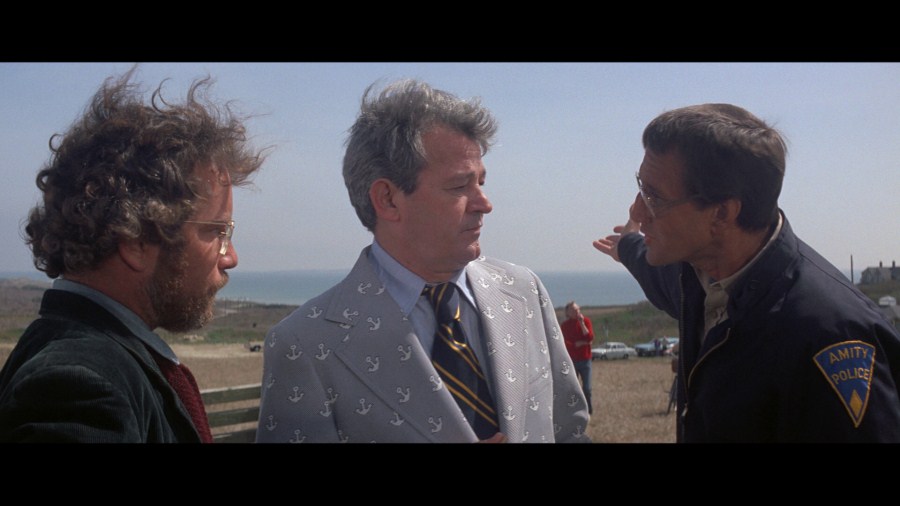 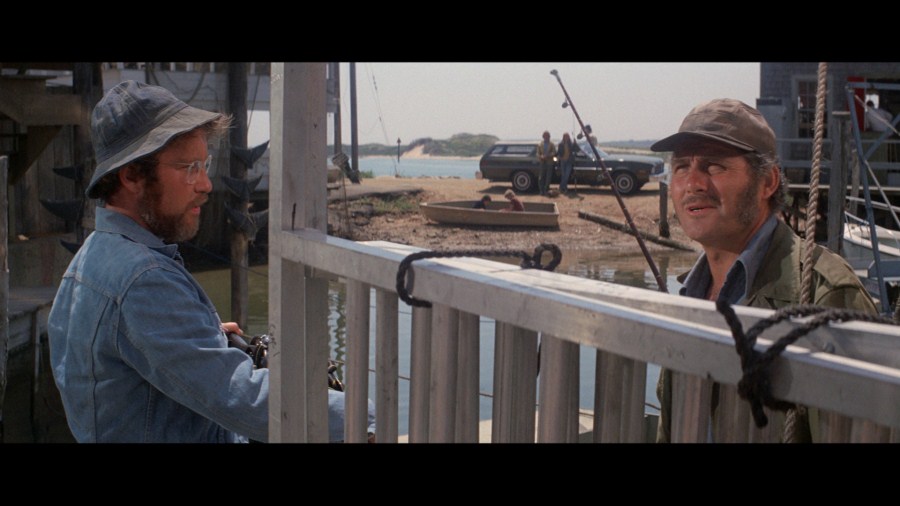 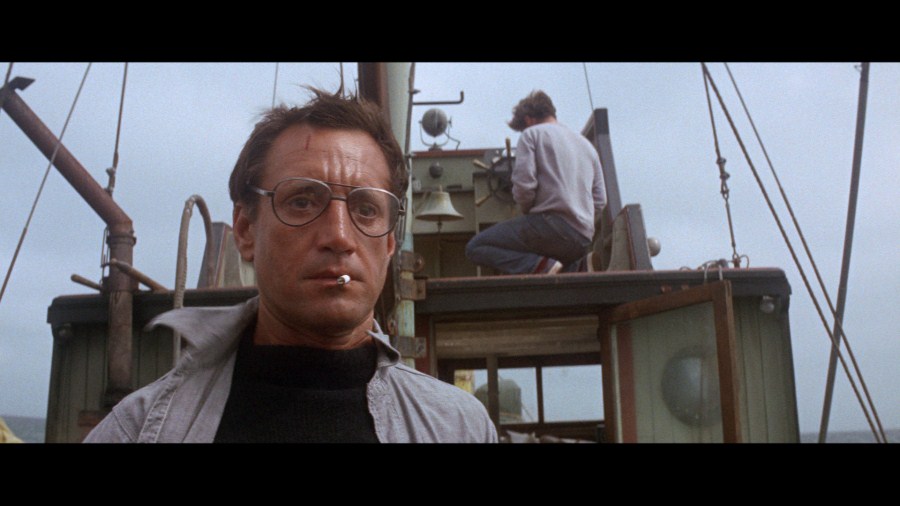 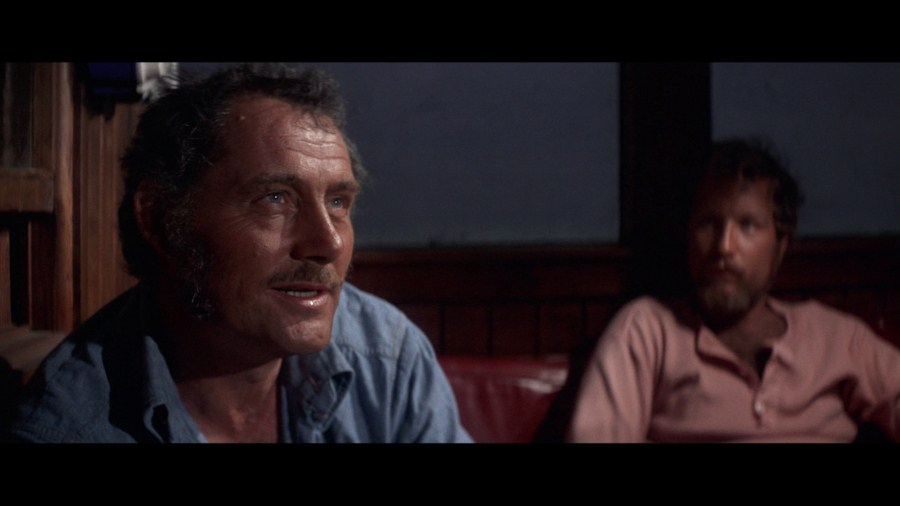 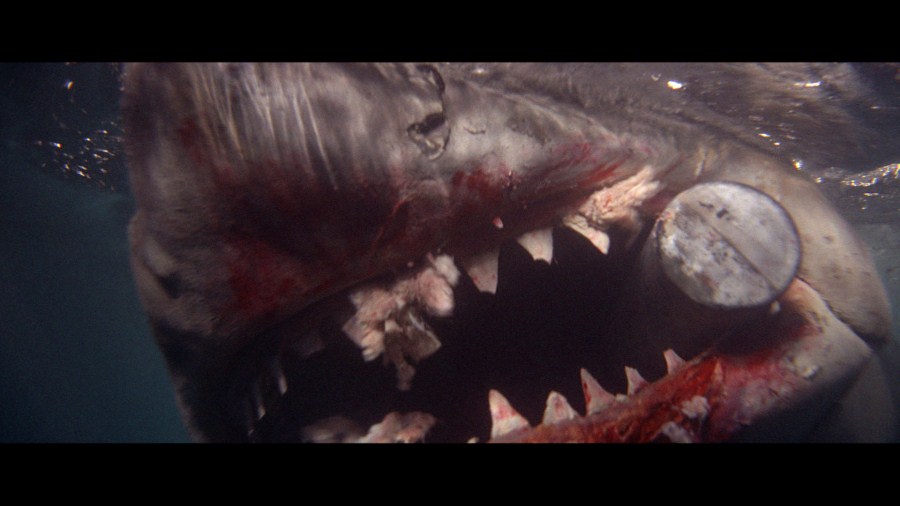 Universal has upgraded the film’s soundtrack to DTS-HD MA 7.1 surround. It sounds to be pretty much a whole new remix as sound effects during many of the action sequences do sound a little different.

The film was originally presented in mono so, like most probably are, I dreaded how awkward this track might be. But it’s actually a pretty decent mix that doesn’t go too overboard like some remixes tend to do. Dialogue sticks mainly to the fronts with some stereo effects between the speakers while John Williams’ score fills in all of the speakers cleanly and naturally, almost like the orchestra is there with you, and the lower frequency delivers a strong amount of bass. The action scenes also present some effects moving between all of the speakers, but these scenes are nicely handled and again don’t overdo it. It’s not until the end, when the shark tries to break through the boat, where I felt the track goes a little overboard with all sorts of objects crashing about, the track’s volume levels reaching incredibly high levels, and so on. But this is may be the only moment where it didn’t quite work for me.

What’s especially nice, though, is that the sound quality between the many layers of the track sound to be the same in terms of quality. Everything is sharp and clear, sounding absolutely natural and fresh. What bugs me most about surround track upgrades from older mono ones is that the quality can differ severely between the many sources used to mix it. Criterion’s Anatomy of a Murder comes to mind, where the 5.1 track on that release presented a crisp, obviously new recording of the film’s soundtrack, while everything else about the track—the voices and sound effects—still sounded flat and, well, dated. This created an odd separation and was a bit distracting for that film. There’s also other tracks, like many MGM ones, where the surrounds and extra effort overpower the dialogue. But here, where I suspect a newer recording of the score was used and some sound effects may have been newly recorded, everything blends nicely with the original voice recordings.

Though I was fine with the surround track I was still happy to see that Universal also includes the original mono track, presented in DTS 2.0. It hasn’t received the same restoration efforts that the 7.1 remix obviously received, and it’s unfortunately not a lossless track, but it still sounds clean with intelligible dialogue, presenting no issues worth noting.

The 7.1 track has received more love and does sound the better of the two, but the mono also sounds fine enough as well, capturing what I would assume is how the film sounded during its original release. It will, of course, come down to personal preference.

Universal’s Blu-ray carries over most of everything found on the previous DVD and laserdisc editions, starting with a collection of deleted scenes and outtakes. There is 13-minutes worth of material here, presented in standard definition and the material has not been enhanced for widescreen televisions, so a black border appears around the footage. The footage is made of short deleted scenes or extended bits that either lead into or follow other segments that are in the film. Most of it is not of much concern though there is an intriguing scene with Quint and a scene involving the mob hunt for the shark. There are also a couple of outtakes, one involving a prop gun that won’t fire and another around a character’s death scene.

Next we then get the classic making of documentary, The Making of Jaws, which had originally been released on the Signature Series laserdisc and various DVD editions (though an early one had cut it down severely.) Mixed in with a wealth of footage shot on set and behind-the-scenes, it’s still essentially a talking-heads piece, but it’s still certainly one hell of a talking heads documentary. Running around 122-minutes, the documentary gathers together various members of the cast and crew to talk about the film, which had a difficult production history, from finding the right people to make the film, to shooting on water, and then the fact the mechanical shark just would not work. Despite it’s rather simple nature and leisured pace, which I welcome more than a lot of the modern day quick cut ones you get on many big studio releases now, it’s easily one of the most informative and engaging docs of its type and actually almost proves more fascinating than the finished product in some respects.

Universal then adds the recent documentary, made by fans as I understand it, The Shark is Still Working, a 101-minute feature on the film’s lasting impact. The first half is almost a summation of the lengthier doc, going over the many issues that occurred, and it again features interviews with members of the cast and crew that still manage to offer some new insights (Spielberg admits that if he made the movie now, he would probably use CGI for the shark, show too much of the shark in the process, and would more than likely ruin the film.) But where the piece gets more interesting is when it moves away from the making of the film and looks at everything around it, like the book The Jaws Log, the making-of documentary that was made for the laserdisc, the marketing, and the huge fan base. There’s also a look at the collectors of the film’s props, people who bought the house of editor Verna Fields, and even a look at a festival called Jaws Fest. In comparison to the making-of it’s certainly not as good or as informative, and admittedly a lot of material in here (though not all) is covered in the other piece, but it’s still a lovingly put together program that’s also fairly entertaining itself.

After this we get an 8-minute segment on the film’s restoration. The piece looks at the painstaking process that went into the restoration and transfer, taken from the original negative, and it also looks at the surround track upgrade. And yes, it confirms some tweaks were made to the film.

Following this is pretty standard archival stuff. There’s a 9-minute segment simply called From the Set, which presents footage and interviews taken from the set in 1974. Pretty standard stuff showing some of the difficulties on the set (all covered in the other documentaries) but I found it a nice addition simply for Spielberg’s conversation about his film The Sugarland Express.

There’s also a decent archive gallery presenting storyboards, production photos, various marketing materials, and other items from around the world. All of the galleries are set up to allow you to scroll through each item or you can just let it play through on its own like a slideshow. The supplements then conclude with the film’s original theatrical trailer.

This package also includes a DVD copy of the film (though missing the documentary The Shark is Still Working) as well as code for either a standard digital copy or Ultraviolet streaming option, none of which I looked at.

I’m amazed that more newer material hasn’t been added, but the 2-hour documentary is still a hard one to beat and after that I can’t say much more could probably be said about the making of the film. In terms of supplements this isn’t a huge upgrade over previous editions, but we still get a solid set of material.

Overall it’s a nice job by everyone involved. I don’t think anybody will find any surprises in the supplements, but the old supplements still hold up and really get into great detail about the film’s production. And the new restoration is actually quite impressive, with a transfer that manages to deliver a sharp presentation. Overall it comes highly recommended.