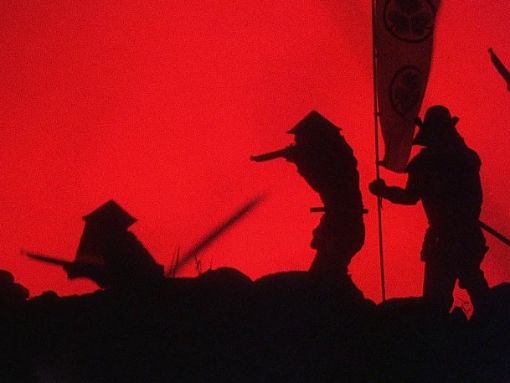 When a warlord dies, a peasant thief is called upon to impersonate him, and then finds himself haunted by the warlord’s spirit as well as his own ambitions. In his late, color masterpiece Kagemusha, Akira Kurosawa returns to the samurai film and to a primary theme of his career—the play between illusion and reality. Sumptuously reconstructing the splendor of feudal Japan and the pageantry of war, Kurosawa creates a historical epic that is also a meditation on the nature of power.

Like the previous 2005 DVD release, Criterion presents Akira Kurosawa’s Kagemusha in the aspect ratio of 1.85:1 on this dual-layer disc. The image is presented in 1080p.

This transfer looks to be the same high-def transfer used for the DVD (though obviously not downscaled.) The last few Blu-rays from Criterion showed significant, obvious improvements over their DVD counterparts but I don’t think I can say the same thing here. The Blu-ray is certainly superior to the DVD in the picture department but it’s in the ways you would expect a Blu-ray to be better. The image is sharper with more distinct details present in outfits, landscapes, and in the sets, making the DVD look a little muddier in this regard. Grain is far more natural and noise isn’t an issue like with the DVD, which had its fair share of compression artifacts more obvious now when I compare the Blu-ray’s transfer to it.

The print looks to be in the same condition with a few blemishes here and there but overall quite clean. I can’t say colours have been improved upon and I kept comparing back and forth between the DVD and Blu-ray, concentrating specifically on the dream sequence. Other than maybe some deeper blacks and better rendered reds (which presented some obvious compression artifacts on the DVD) colours actually look about the same, both presenting bright, vibrant colours, all wonderfully saturated.

If I don’t sound super enthused it’s more because it’s what I expected, which isn’t a bad thing because I expected it to just improve over the DVD in certain ways, which it does. Despite its obvious problems (more obvious now) the DVD’s transfer is actually quite good but the Blu-ray is much sharper, cleaner, and more film like. 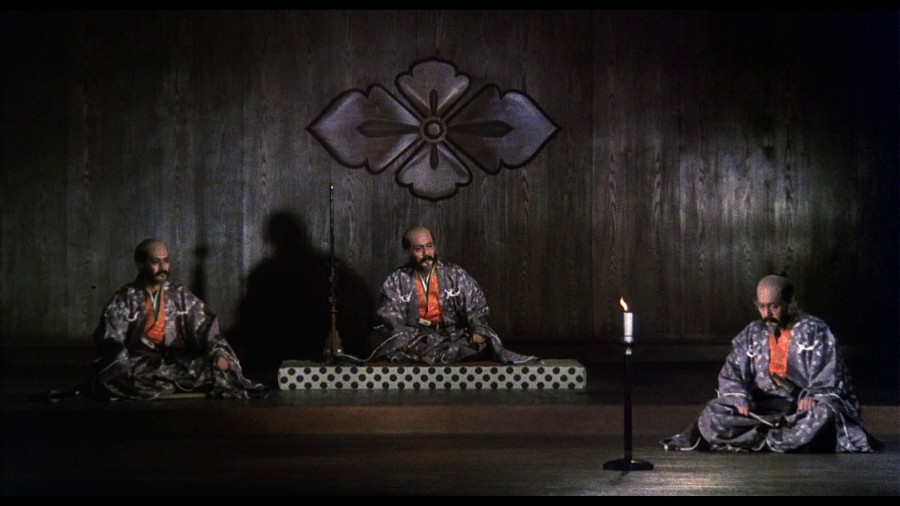 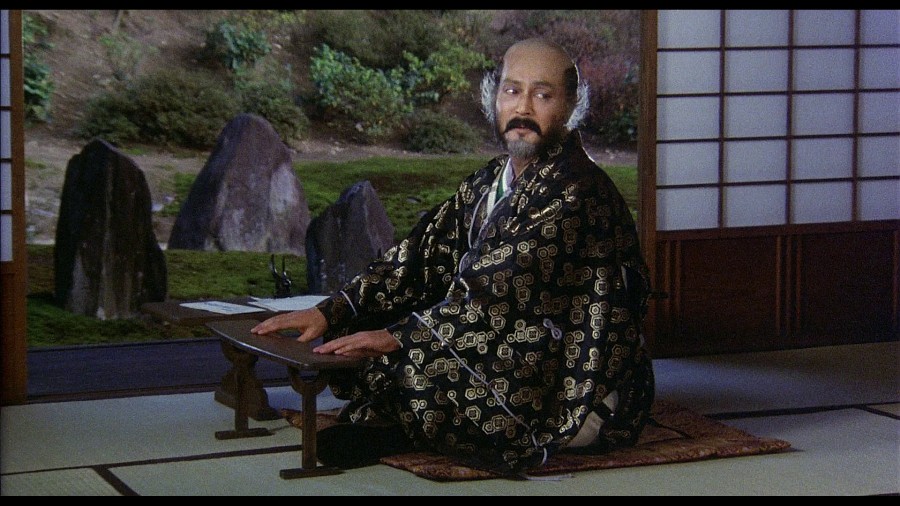 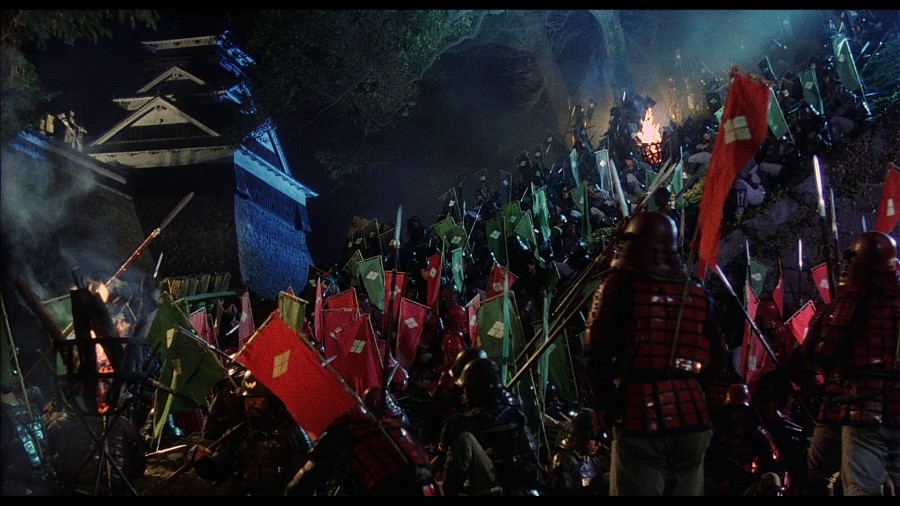 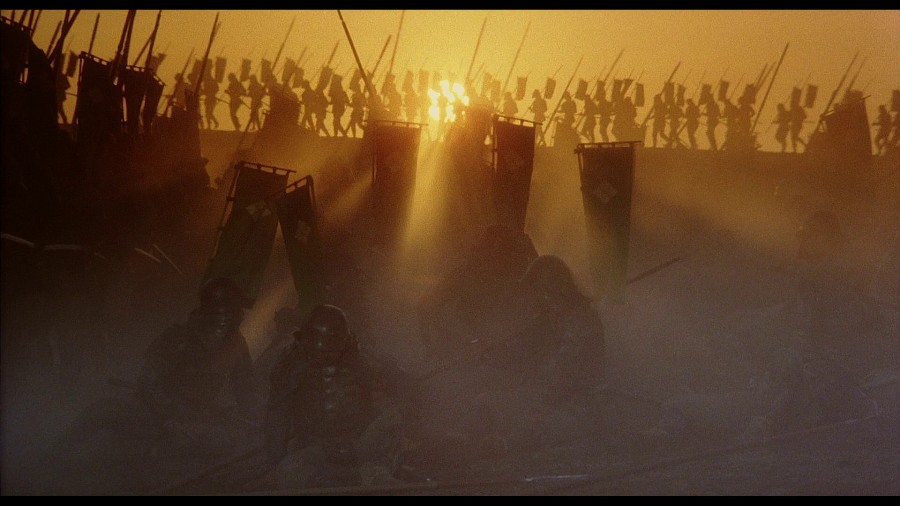 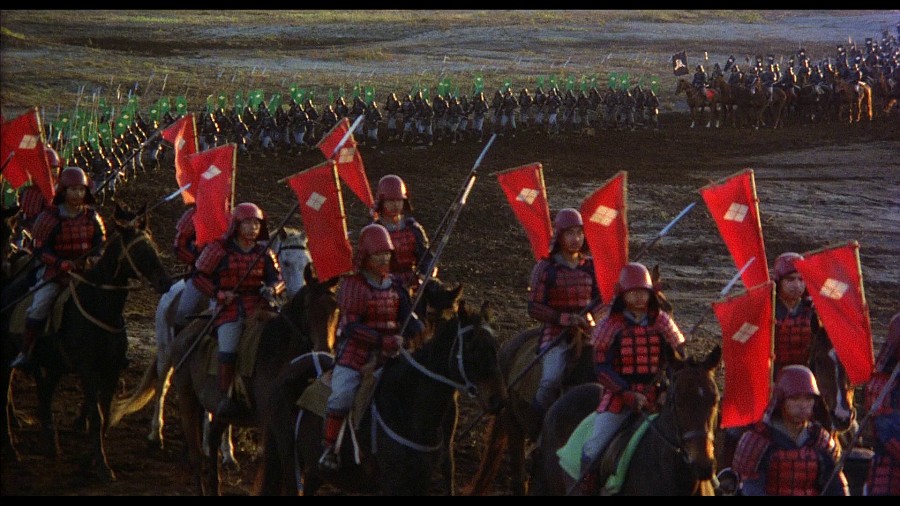 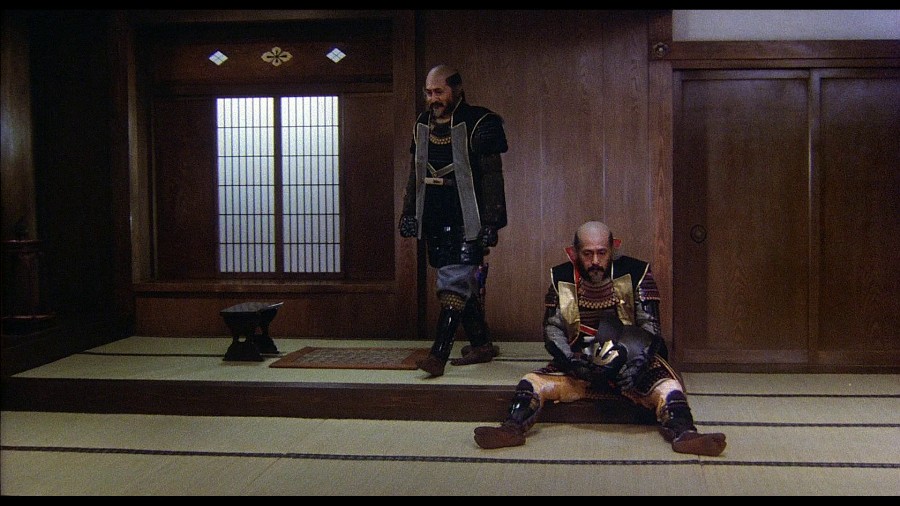 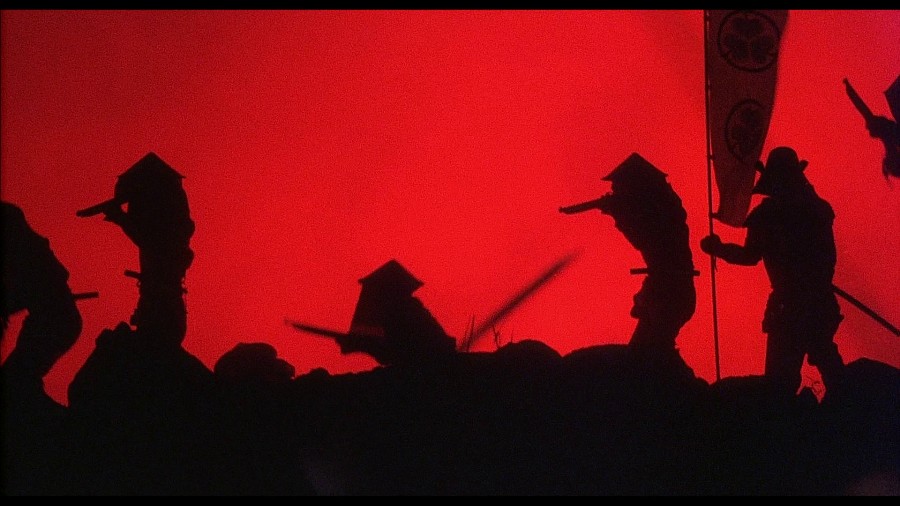 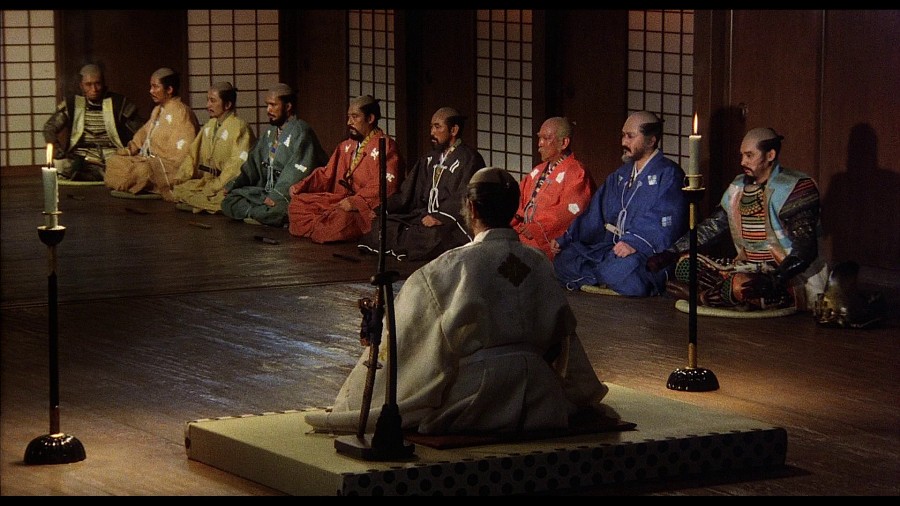 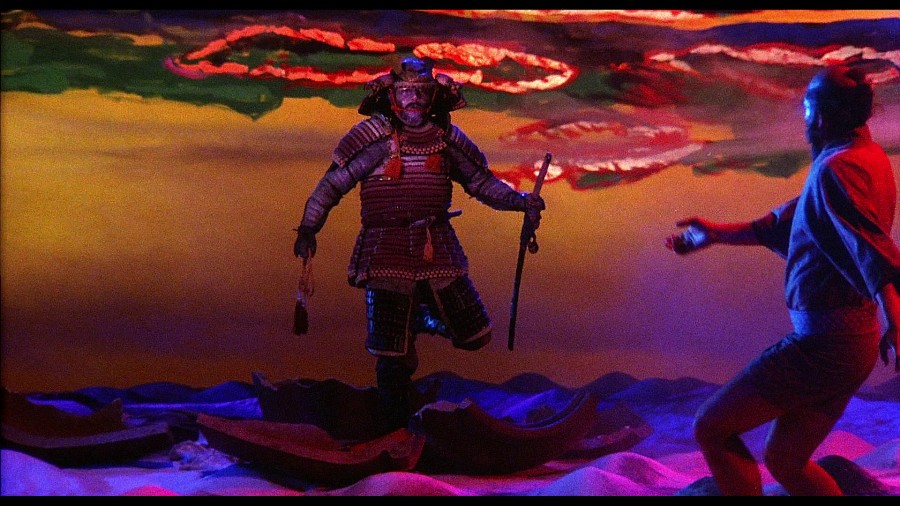 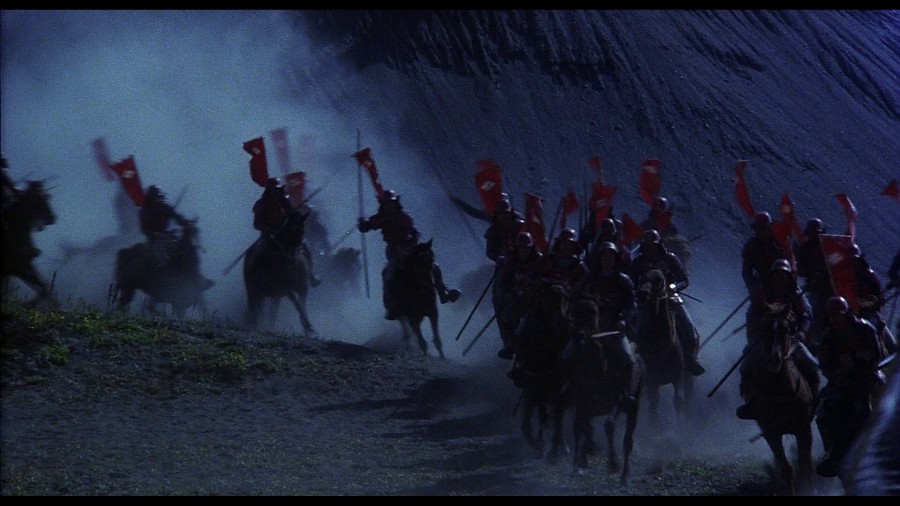 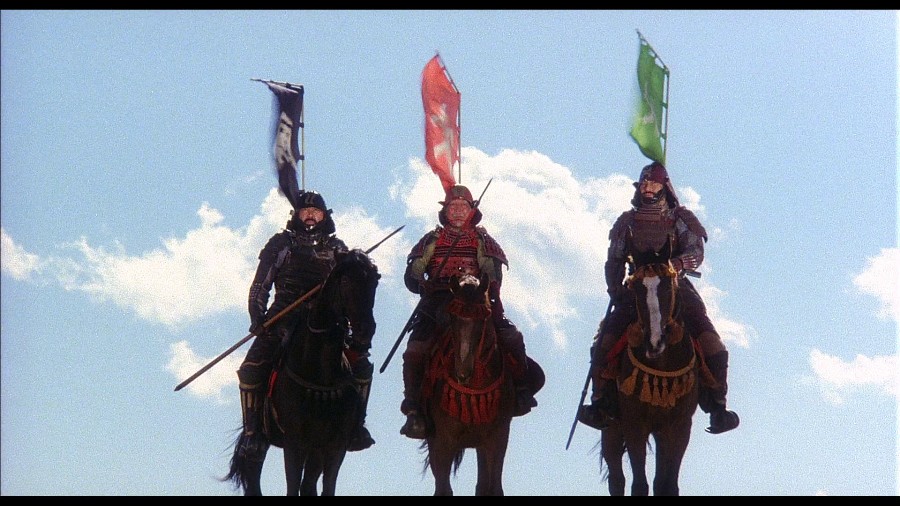 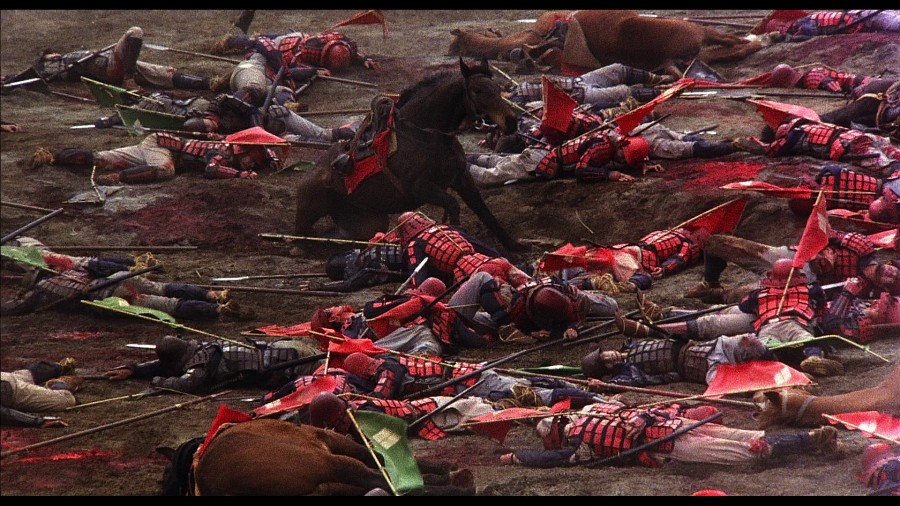 Criterion includes a Japanese DTS-HD 4.0 master audio track for the film, offering a rather sharp and very noticeable improvement over the DVD’s Dolby Digital 4.0 track packing more of a punch. It presents a very clear, very distinct sound field. In general it’s a fairly quiet film but it does have its louder, more “action-packed” moments (I guess you could say) which come off far stronger, and audio quality is crisper and cleaner than the DVD’s. Early on there is a sniper’s gunshot that comes out of nowhere which comes off decent on the DVD but far more striking and shocking on this Blu-ray. Music and sound effects fill out the sound field wonderfully, battle sequences present some sharp, discrete effects with excellent separation, and finally the bass is deeper and more prominent. It’s a perfect fit for the film and a rather sharp, clear improvement over the DVD.

The Blu-ray edition of Kagemusha pulls over just about everything from the 2-disc DVD set and packs them all on one disc here.

The first feature is a screen-specific audio commentary by Stephen Prince who has provided commentaries for a number of Criterion’s Kurosawa releases. This is another excellent track if a little bloated. In it Prince covers this period during Kurosawa’ career and the making of the film, but spends a lot of time talking about the imagery, styles, and symbolism in the film. The film is visually dense and Prince breaks it down nicely. I also admire how at 3 hours he’s able to keep the track going, though there are some stretches that do prove less interesting than others. Certainly worth listening to.

The remaining supplements are found under the “Supplements” section of the pop-out menu.

First up is Lucas, Coppola, and Kurosawa, a 19-minute interview featuring directors George Lucas and Francis Ford Coppola. In it the two, filmed separately, talk about their introduction to Kurosawa’s work and then make their way to meeting the director and helping him finance Kagemusha after Kurosawa having severe problems getting financing for projects, Lucas using his clout from Star Wars to convince Fox to help in funding the project (Fox getting North American distribution rights, Toho in Japan) though it was still no easy feat. They share their experiences watching Kurosawa work and also share their opinions of the film, Lucas probably liking it a little more than Coppola. It’s an excellent interview and offers a nice reflective piece on the film.

Akira Kurosawa: It is Wonderful to Create is yet another segment from the Toho Masterworks series, this segment of course covering the production of Kagemusha. It runs about 40-minutes and offers a fairly extensive look at this film and Kurosawa’s later period. The documentary gathers interviews with various members of the crew and also offer up plenty of photos and the paintings Kurosawa used in planning the film. It also gets more in depth into the departure of the film’s original star, Shintaro Katsu. These are always excellent making-of documentaries and this one is no different. It offers a very thorough, very interesting look into the making of the film. I actually hope the entire thing makes it’s way here at some point. The feature is divided into 7 chapters.

Image: Kurosawa’s Continuity is a 43-minute feature put together by Masayuki Yui, and is a rather cool one. Kurosawa tried to get financing for Kagemusha for a while after finishing the script only to be turned down because of the budget (Coppola and Lucas eventually helped him.) Fearful that the film would never get made Kurosawa (as stated in the text opening) drew hundreds of images representing his vision for the film. Here those paintings have been filmed in a storyboard fashion with audio clips from the film playing over. It’s a fantastic presentation and a rather nice feature especially if you enjoy Kurosawa’s artwork. It’s been broken down into 20 chapters.

A Vision Realized is small storyboard gallery presenting a sampling of Kurosawa’s paintings again and placing them next to actual shots of the film. Rather fascinating to see the work compared to the actual film since what ended up on screen is so close to what Kurosawa envisioned in his head. It’s a still gallery presentation similar to the DVDs where you use the arrows on your remote to navigate through everything.

And finally we get a collection of Suntory Whiskey commercials that Kurosawa did. Apparently Kurosawa did plenty of these (I assume to keep him afloat) but the ones presented here were done from the set of Kagemusha. 5 are presented here running about 3 minutes and 40 seconds in total. Where the DVD would allow you to play them all you cannot actually do that here and have to play them one at a time. This setup is rather irritating because once the ad ends you either go back to the main menu or main feature having to then navigate back to the other commercials. Past that, though, they’re actually rather cool and work at providing some behind-the-scenes moments, but how Suntory relates to the footage presented here is questionable, though I like the one ad where Coppola and Kurosawa are sitting together with what looks glasses of Suntory Whiskey in front of them. Stuff like this always makes me glad for the existence of Criterion because I can’t imagine any other studio (in this case Fox) actually bothering to turn this stuff up.

The supplements then close with three theatrical trailers, one for the U.S. (the colours of which look very “off”) and then a couple of Japanese trailers, one being a teaser but just as long as the regular trailer. Both are in far better shape than the American Fox trailer.

And similar to all of Criterion’s Blu-rays you also get the Timeline feature. You can open it from the pop-up menu or by pressing the RED button on your remote. This is a timeline that shows your current position in the film and like pop-up menus for most Blu-ray releases it appears over the film as it plays. It lists the index chapters for the film and the commentary track, and you can also switch to the commentary track from here. You also have the ability to “bookmark” scenes by pressing the GREEN button and return to them by selecting them on the timeline. You can also delete bookmarks by pressing the BLUE button. This is pretty common on Blu-ray so it’s nothing new but I’ve always liked Criterion’s presentation.

The Blu-ray also comes with a 37-page booklet and this is the only area of the release that doesn’t exactly duplicate the DVDs. Included is an essay on the film by Peter Grilli and a reprinting of a wonderful interview with Kurosawa by Tony Rayns that was done after the film’s release. Missing is a segment from Donald Ritchie’s book “Public People, Private People” which had Ritchie reflecting on his experiences with Kurosawa’s work and his meeting with the man before production of Kagemusha actually began. It’s actually a shame this bit didn’t show up in the booklet as I actually found it the best aspect of the DVD’s booklet. The DVD’s booklet also presented a selection of paintings Kurosawa did for the film, presented on alternating pages. They’ve included all the paintings but have doubled up some of them since the booklet is shorter. There are a couple of other differences that stick out between the two. The chapter summary is missing for some reason (it’s actually not printed anywhere in this package and noticed a minor difference in the essay by Grilli: A line that reads “Three years later, Kurosawa was invited to make a film in Russia by Mosfilm” now reads “Two years later, Kurosawa was invited to make a film in Russia by Mosfilm,” obviously just a correction. There may be other differences but a better eye might be able to pick them out.

And that concludes it. This is actually one of the more satisfying releases from Criterion for a Kurosawa film, thoroughly covering everything about it. I actually can’t think of anything else that could be added (though I guess keeping the segment from Ritchie’s book would have been something.) A very satisfying collection of supplements.

The supplements are quite satisfying and very thorough, just like the with the DVD. Where the Blu-ray obviously champions over the DVD is the audio and video transfer: They’re just far more sharper and cleaner than the DVD’s. 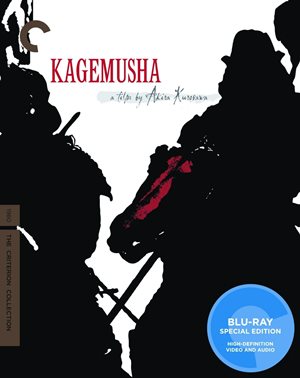