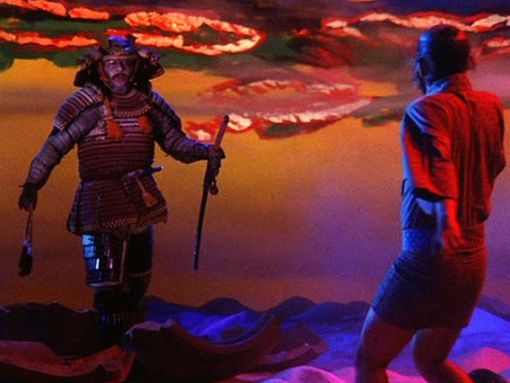 In his late, color masterpiece Kagemusha, Akira Kurosawa returned to the samurai film and to a primary theme of his career-the play between illusion and reality. Sumptuously reconstructing the splendor of feudal Japan and the pageantry of war, Kurosawa creates a historical epic that is also a meditation on the nature of power. The Criterion Collection is proud to present Kagemusha for the first time in its full-length version in the United States.

Kagemusha is presented by Criterion in its original aspect ratio of 1.85:1 on the first dual-layer disc of this two-disc set. The image has been enhanced for widescreen televisions.

Fox had been sitting on this, more than likely never doing a thing with it (they had previously released it only on VHS long ago) so it was most welcome to hear Criterion was able to grab it. The film is one of Kurosawa’s more visually extravagant films and it deserves a fantastic transfer, which it mose surely gets here. The transfer is consistently sharp with excellent definition and detail. The film is surprisingly colourful and Criterion’s transfer handles them all rather well. There are a few sequences that can look a little muddy but a majority of the film presents bright and bold colours. Some compression artifacts are visible on occasion but they don’t detract from the viewing.

The print is also in excellent shape with only a few blemishes present. In whole Criterion has put a lot of love and care into the image for this one. 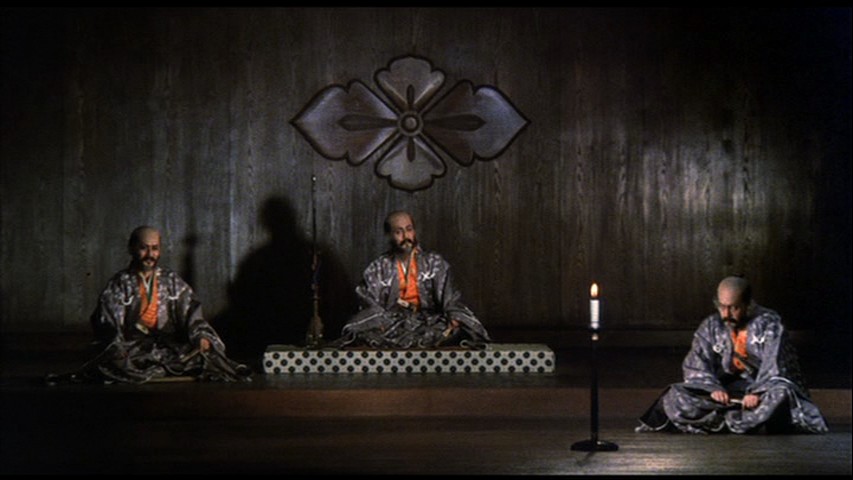 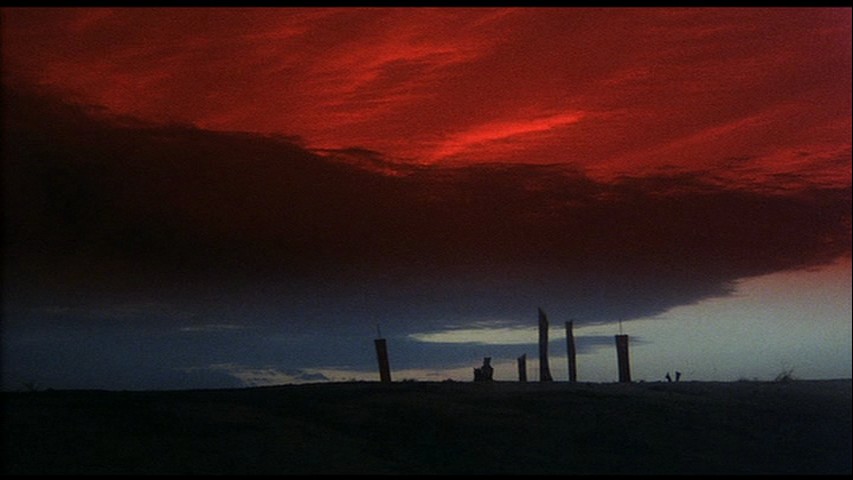 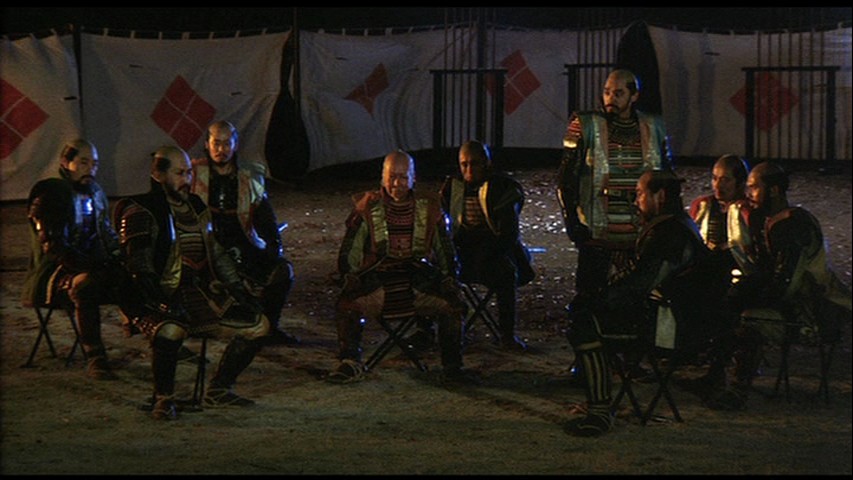 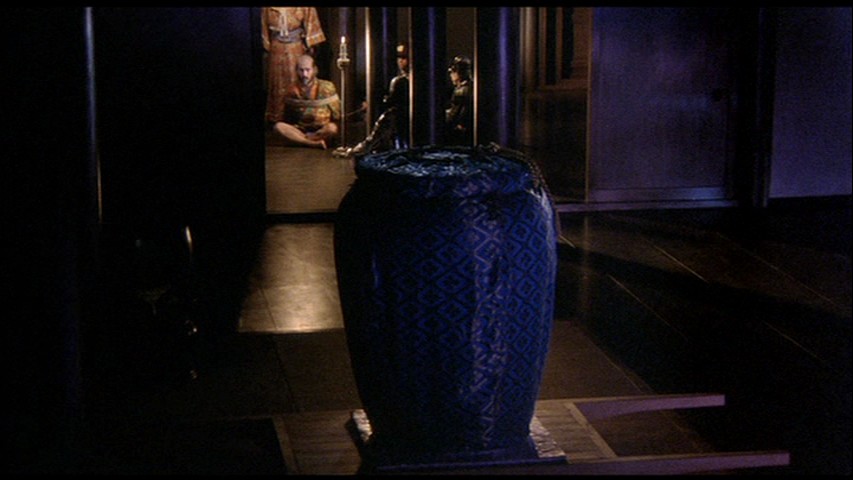 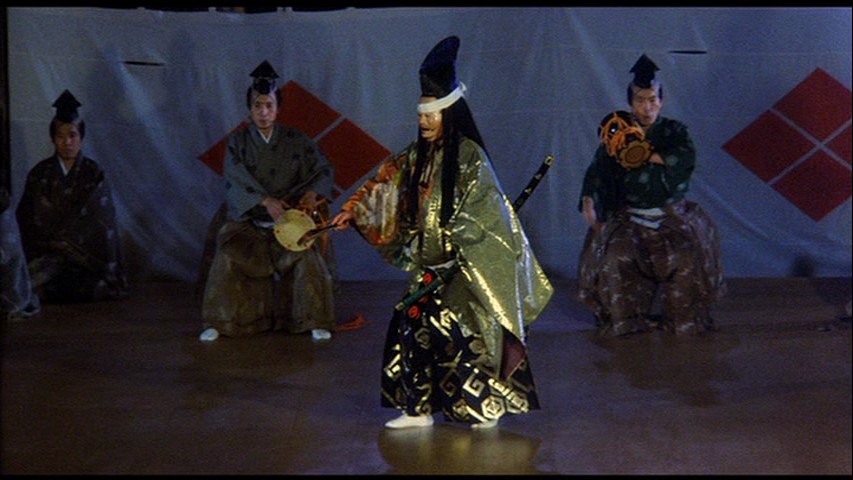 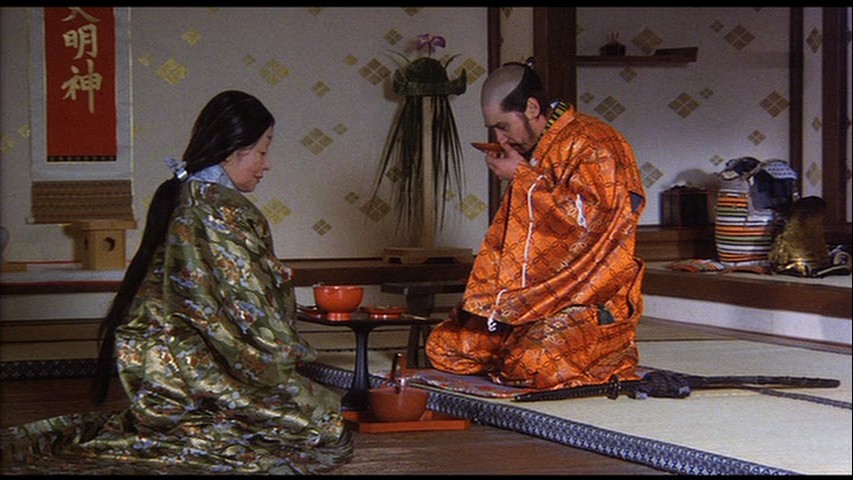 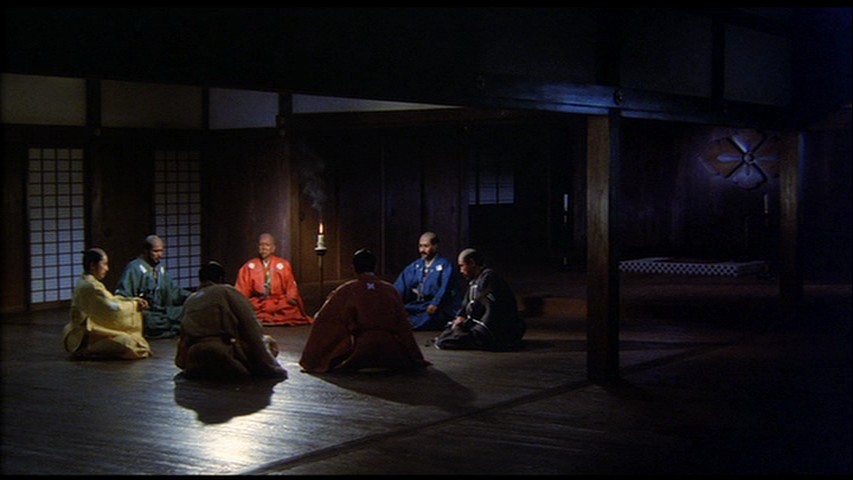 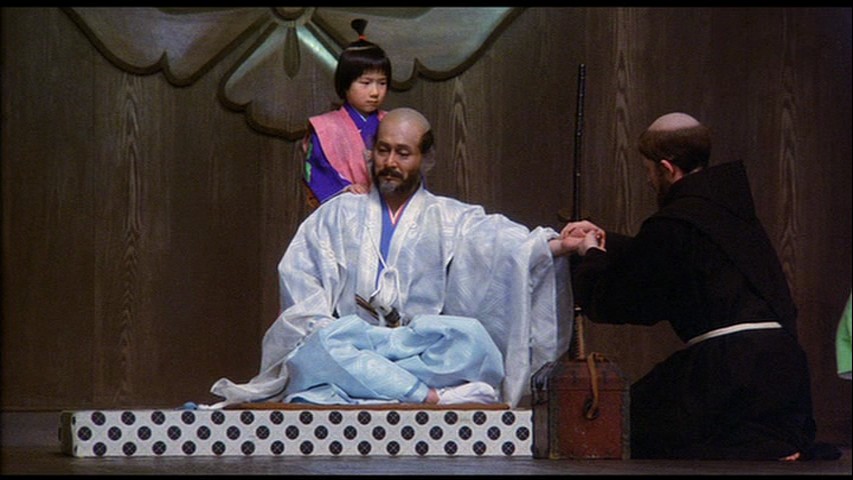 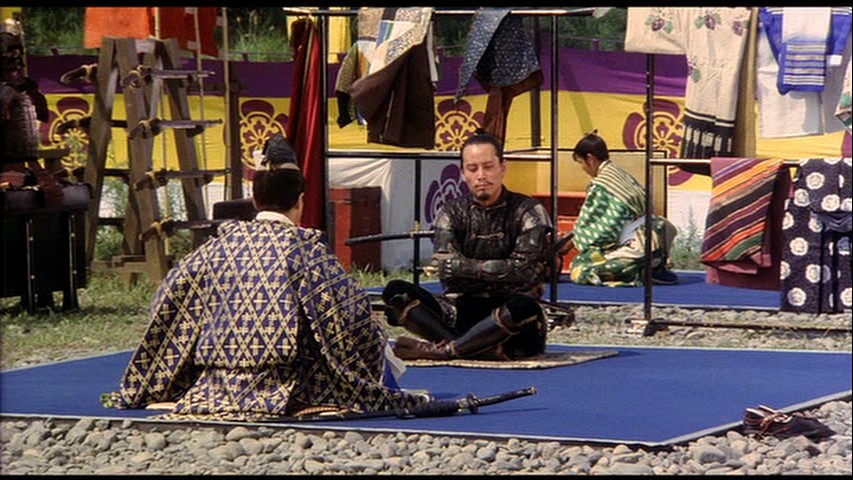 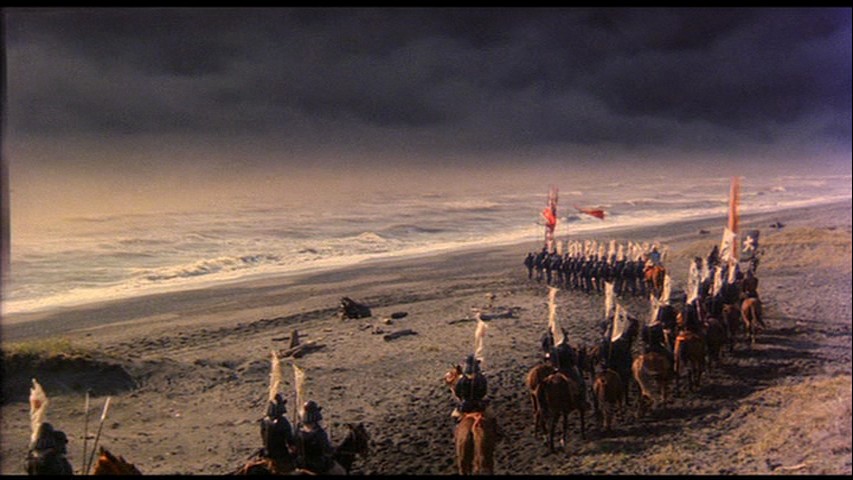 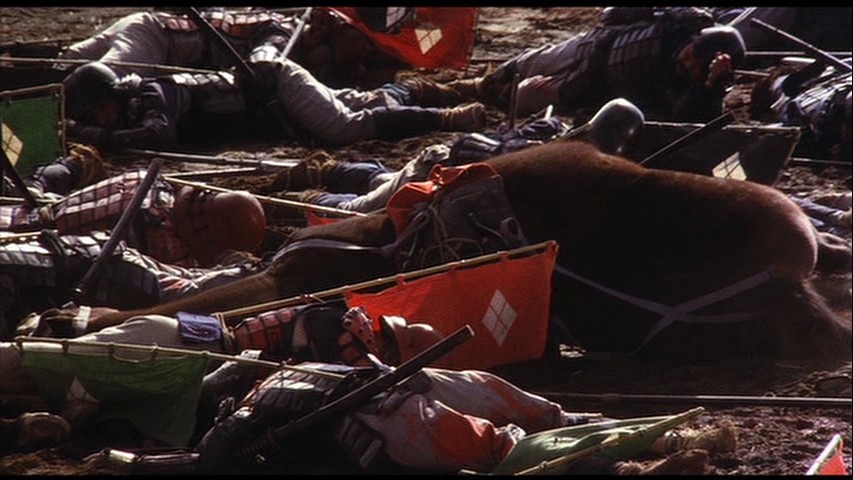 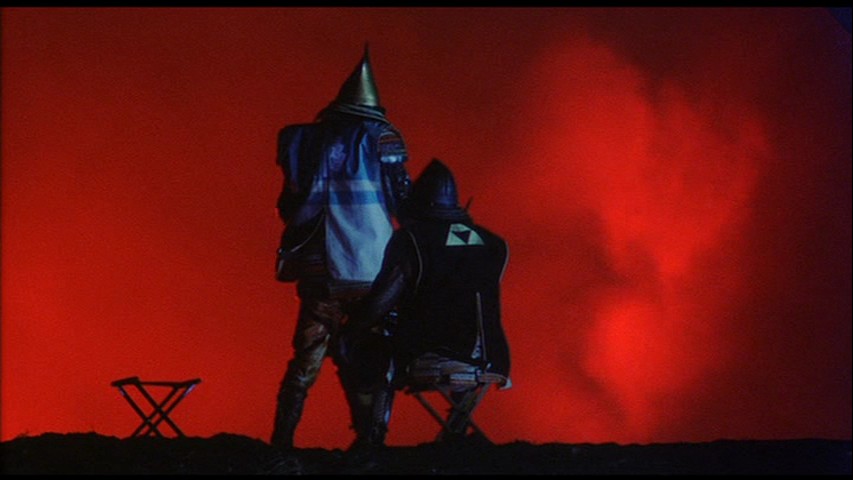 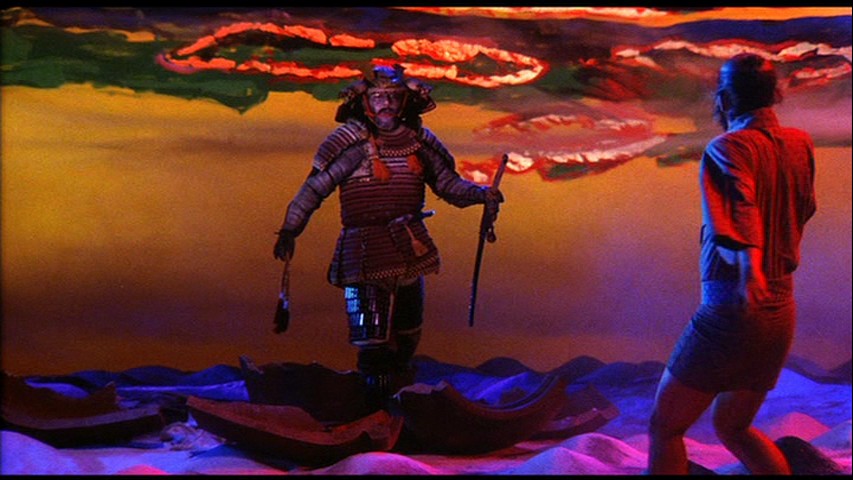 The DVD presents a Japanese Dolby Digital 4.0 surround track. The track is clean, free of distortion and noise, but is also surprisingly active. The quieter dialogue driven sequences stick to the front center but the battle sequences present some nice separation in the fronts and some noticeable rear sound effects. It’s surprisingly robust and a great track for the film.

Criterion’s two-disc set spreads a few features over them.

The first disc features a screen-specific audio commentary by Stephen Prince who has provided commentaries for a number of Criterion’s Kurosawa releases. This is another excellent track if a little bloated. In it Prince covers this period during Kurosawa’ career and the making of the film, but spends a lot of time talking about the imagery, styles, and symbolism in the film. The film is visually dense and Prince breaks it down nicely. I also admire how at 3 hours he’s able to keep the track going, though there are some stretches that do prove less interesting than others. Certainly worth listening to.

The first disc then closes with 3 theatrical trailers, one for the U.S. (the colours of which look very “off”) and then a couple of Japanese trailers, one being a teaser but just as long as the regular trailer. Both are in far better shape than the American Fox trailer.

The remaining supplements are found on the second disc.

First up is Lucas, Coppola, and Kurosawa, a 19-minute interview featuring directors George Lucas and Francis Ford Coppola. In it the two, filmed separately, talk about their introduction to Kurosawa’s work and then make their way to meeting the director and helping him finance Kagemusha after Kurosawa having severe problems getting financing for projects, Lucas using his clout from Star Wars to convince Fox to help in funding the project (Fox getting North American distribution rights, Toho in Japan) though it was still no easy feat. They share their experiences watching Kurosawa work and also share their opinions of the film, Lucas probably liking it a little more than Coppola. It’s an excellent interview and offers a nice reflective piece on the film.

Akira Kurosawa: It is Wonderful to Create is yet another segment from the Toho Masterworks series, this segment of course covering the production of Kagemusha. It runs about 40-minutes and offers a fairly extensive look at this film and Kurosawa’s later period. The documentary gathers interviews with various members of the crew and also offer up plenty of photos and the paintings Kurosawa used in planning the film. It also gets more in depth into the departure of the film’s original star, Shintaro Katsu. These are always excellent making-of documentaries and this one is no different. It offers a very thorough, very interesting look into the making of the film. I actually hope the entire thing makes it’s way here at some point. The feature is divided into 7 chapters.

Image: Kurosawa’s Continuity is a 43-minute feature put together by Masayuki Yui, and is a rather cool one. Kurosawa tried to get financing for Kagemusha for a while after finishing the script only to be turned down because of the budget (Coppola and Lucas eventually helped him.) Fearful that the film would never get made Kurosawa (as stated in the text opening) drew hundreds of images representing his vision for the film. Here those paintings have been filmed in a storyboard fashion with audio clips from the film playing over. It’s a fantastic presentation and a rather nice feature especially if you enjoy Kurosawa’s artwork. It’s been broken down into 20 chapters.

A Vision Realized is small storyboard gallery presenting a sampling of Kurosawa’s paintings again and placing them next to actual shots of the film. Rather fascinating to see the work compared to the actual film since what ended up on screen is so close to what Kurosawa envisioned in his head.

And finally we get a collection of Suntory Whiskey commercials that Kurosawa did. Apparently Kurosawa did plenty of these (I assume to keep him afloat) but the ones presented here were done from the set of Kagemusha. 5 are presented here and you can play all (running about 3 minutes and 40 seconds) or each one separately from the index. They’re actually rather cool and work at providing some behind-the-scenes moments, but how Suntory relates to the footage presented here is questionable, though I like the one ad where Coppola and Kurosawa are sitting together with what looks glasses of Suntory Whiskey in front of them. Stuff like this always makes me glad for the existence of Criterion because I can’t imagine any other studio (in this case Fox) actually bothering to turn this stuff up.

The set closes with a rather thick 45-page booklet, half of which includes representations of some of Kurosawa’s paintings for the film. There is an essay on the film and the production by Peter Grilli. You’ll also find a fascinating interview with Kurosawa conducted by Tony Rayns shortly after Kagemusha’s release. The book concludes with a segment from Donald Ritchie’s book “Public People, Private People: Portraits of Some Japanese” which offers Ritchie reflecting on his first experiences with Kurosawa’s work and then seeing him just before production began on Kagemusha. There’s even a bit about the film’s original star Shintaro Katsu. It’s a nice booklet but it’s way too big for the double amaray case and has been known to damage the clips in it (just a warning.)

And that concludes it. This is actually one of the mare satisfying releases from Criterion for a Kurosawa film, thoroughly covering everything about it. I actually can’t think of anything else that could be added (they even threw in the Suntory ads.) A very satisfying collection of supplements.

An incredibly thorough and overall excellent release. The transfer has a few digital problems, I suspect because of the film’s length, but they’re minimal and should detract from one’s viewing. It also contains some great supplements offering a scholarly analysis of the film and covering its rather intriguing production history. One of Criterion’s best releases in my opinion. 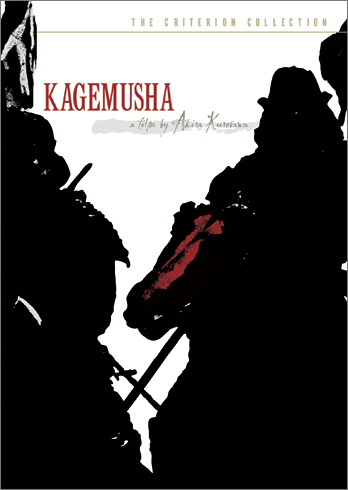