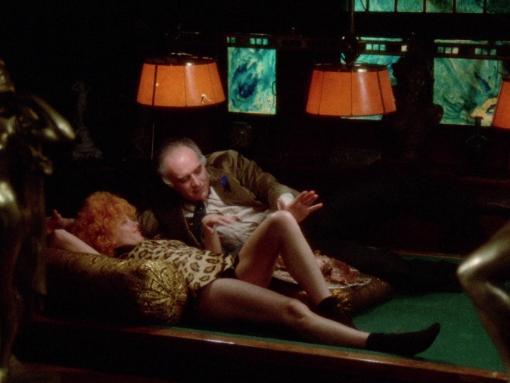 The most famous film by Italian provocateur Marco Ferreri (Dillinger is Dead), La Grande bouffe was reviled on release for its perversity, decadence and attack on the bourgeoisie yet won the prestigious FIPRESCI prize after its controversial screening at the Cannes Film Festival. Four friends, played by international superstars Marcello Mastroianni (Fellini’s 8½), Michel Piccoli (Belle de jour), Ugo Tognazzi (Barbarella) and Philippe Noiret (Zazie dans le métro) retreat to a country mansion where they determine to eat themselves to death whilst engaging in group sex with prostitutes and a local school teacher (Andréa Ferréol, The Tin Drum), who seems to be up for anything… At once jovial and sinister, the film’s jet-black humour has a further twist as the reputed actors (whose characters use their own names) buck their respectable trend for a descent into fart-filled chaos that delivers a feast for the eyes and mind.

Marco Ferreri’s La grande bouffe comes to Blu-ray in this new dual-format edition from Arrow Video. The film gets a new 1080p/24hz high-definition presentation in its original aspect of around 1.66:1 on a dual-layer disc. The new transfer comes from a new 2K scan of the original negative.

Arrow has yet again pulled out an outstanding transfer. It’s not a particularly pretty looking film, in fact I’d be inclined to say it’s an ugly looking film (though purposely so) but the digital presentation is a thing of beauty. There can be some minor artifacting in the grain but I really couldn’t find much to complain about. Yes, the colours are a bit dull and they rarely pop, but this is more than likely the intended look and saturation levels look good. Still the black levels are very strong, fairly inky and deep and nicely balanced, with strong contrast, though a few sequences do feature some noticeable crushing. The detail level is otherwise very high, lavish and unexpected throughout (where the film can have a lot packed into each frame) and it always holds the look of a film.

Notes that open the film indicate that a lot of work went into restoring the film, cleaning up dirt and the like, and that work clearly shows through. Though some minor blemishes remain this image looks incredibly clean, and there’s really nothing of note.

Arrow has done an incredible job here. They’ve taken the rather nice scan they were given and cleaned it up wonderfully without hurting the image and it keeps a natural, filmic look. It’s an impressive job on the whole, and this rather unpleasant looking film manages to look quite stunning on home video. 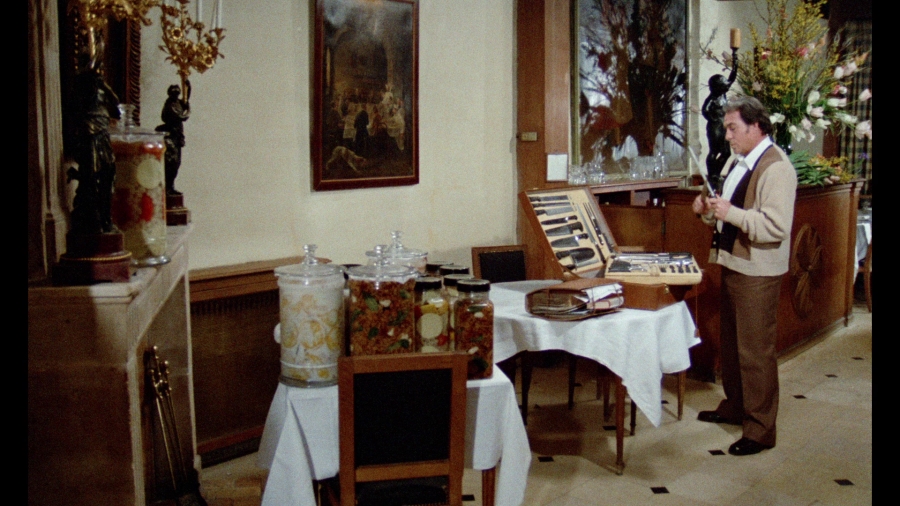 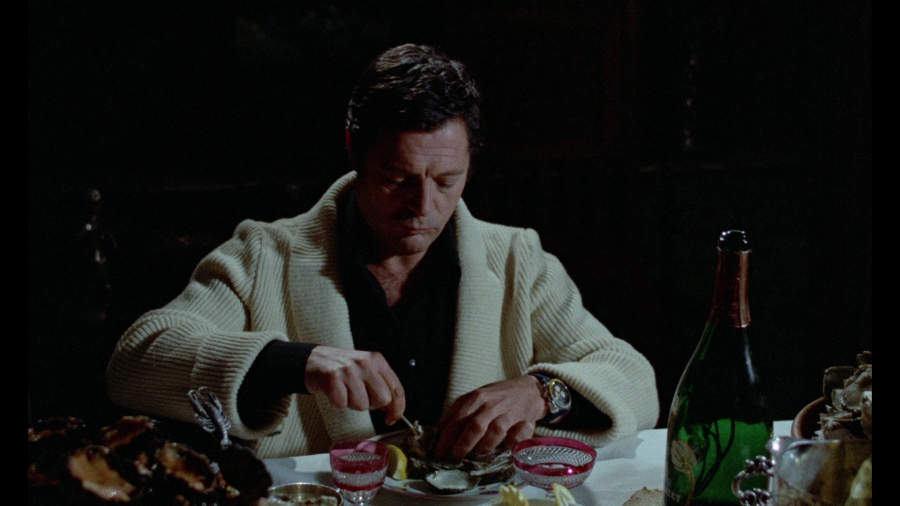 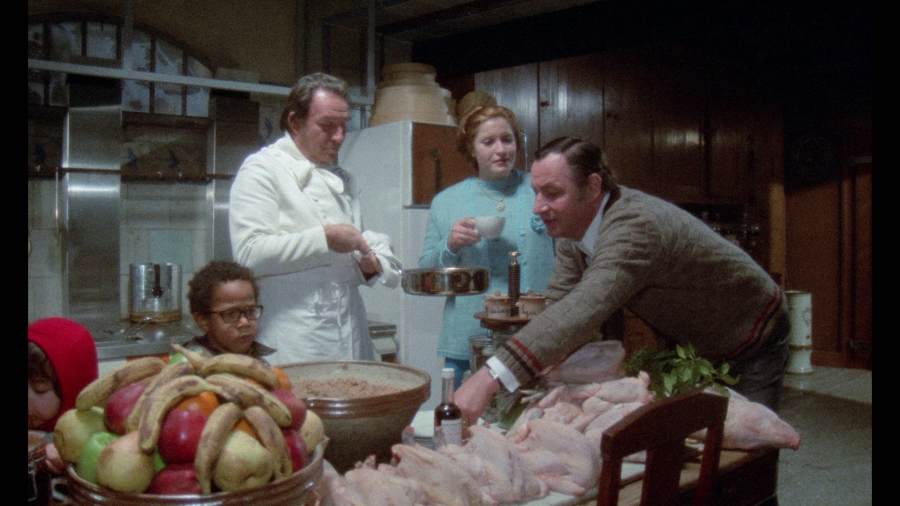 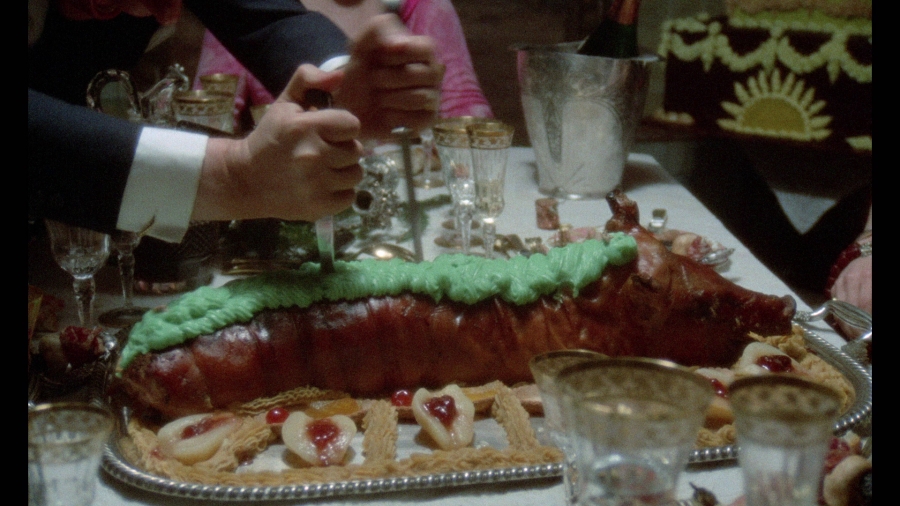 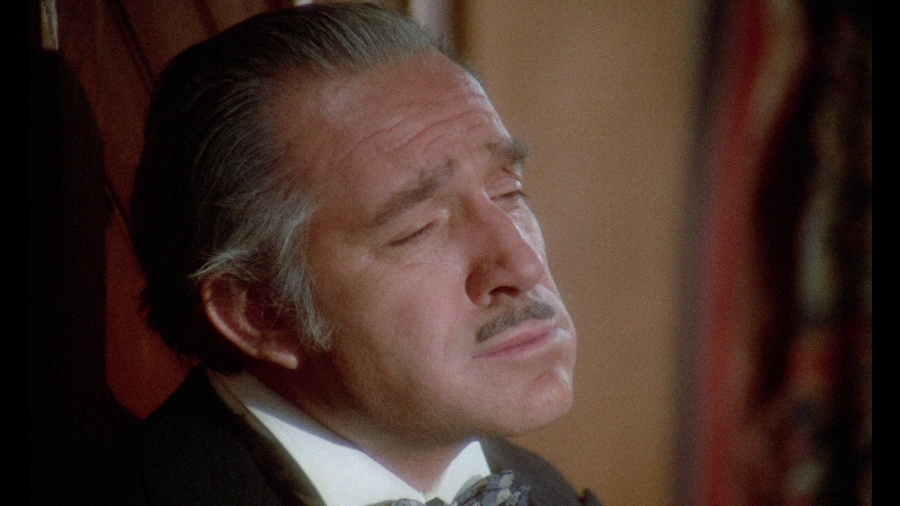 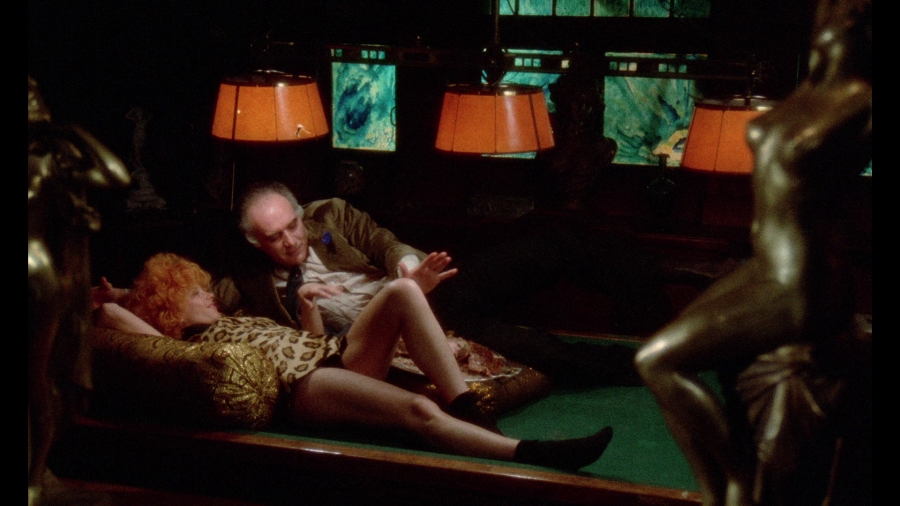 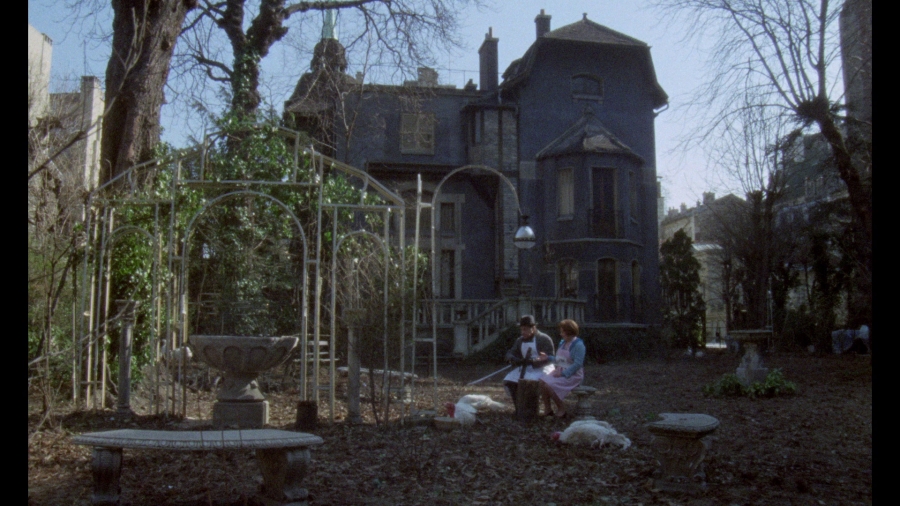 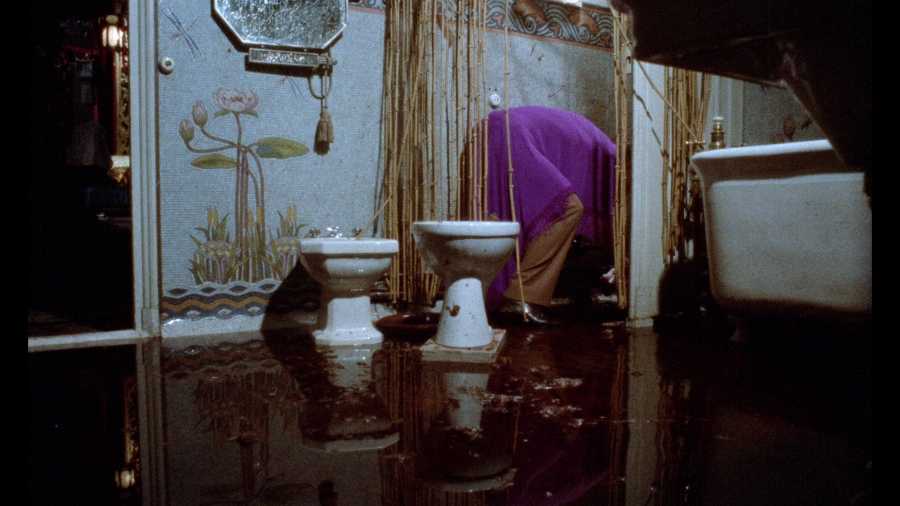 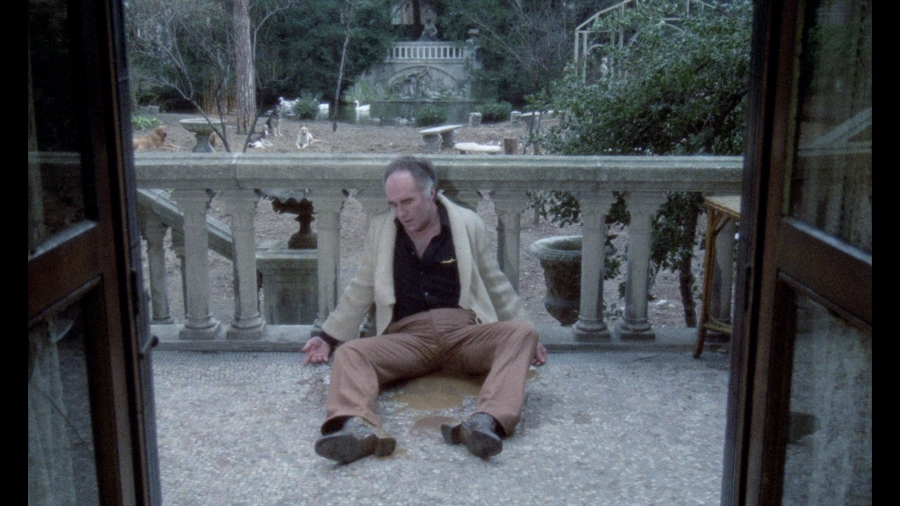 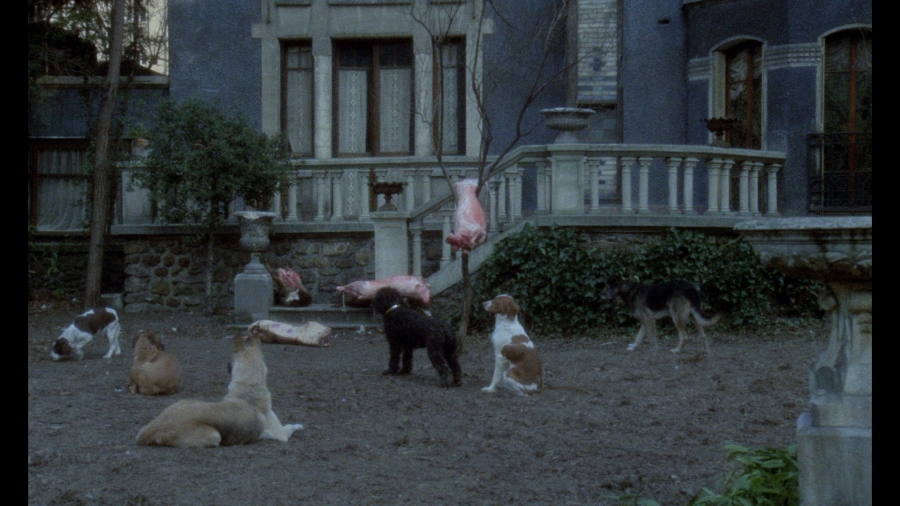 The film’s French track is presented here in lossless PCM 1.0 mono and it sounds pretty good for its age. It’s not the most dynamic sounding film but the quality of the track is still respectable, sounding to have been restored thoroughly with nary a pop or hiss to be heard. Dialogue is clean and easy to hear, as is the music, despite a slight edginess at times. In the end it’s not an overly strong track but it sounds about as good as it more than likely can and is still pleasant enough.

Arrow has put together a nice little package here, starting with an interview with director Marco Ferreri in a segment called The Farcical Movie. Filmed in 1975 this brief 27-minute interview features Ferreri talking about his work and the films that have influenced him over the years, which range from Luis Buñuel’s Nazarin to Tex Avery’s animated short King Size Canary. It’s an fascinating interview, giving insights into the director’s thought process and his interests, though disappointingly he maybe isn’t as detail or forthcoming as I would have liked. But he does address a number of topics about his work, including how he feels about constantly being compared to Buñuel (he’s not fond of it) and the “bravura” found in La grande bouffe.

Following this is an 11-minue behind-the-scenes clip from a French episode of Pour le cinema, which offers some interesting insights about the film’s production (I was especially amused by a call sheet detailing all of the food required for a particular scene). It also gets interviews with Ferreri—who explains what the film is about and whether the film should be taken literally or not—and some of the actors, including Piccoli and Mastroianni, who talk about the excitement of working on a film such as this, particularly the aspect of an actor working “without abandon.” Arrow then includes another archival segment, running 4-minutes, from something called Colours Around a Festival, featuring a group interview with Ferrir, Piccoli, Tognazzi, Noiret, and composer Phillippe Sarde, who talk about the controversies around the film, and their surprise at what certain people focus on in the film—like the sex, farting, and so on—forgetting everything else about the it. It’s short but another nice addition.

Forming Ferreri is a new 18-minute interview with Italian film scholar Pasquale Iannone, who basically gives an overview of Ferreri’s career, the style of his films, and the themes he covers. Following this is a selected scene commentary also featuring Iannone, and here he focuses more on La grande bouffe. He covers 5 sequences in the film over the span of 27-minutes, and spends most of his time talking about the film’s cast, going over their work and other work some have done with Ferreri (Piccoli, who was also in Ferreri’s Dillinger is Dead, considered the director probably his closest friend). He also tries to give an idea of the atmosphere on set and also goes over Andréa Ferréol’s time on the set and her concerns over what the film might do to her career (she also had a nutritionist on set and was also provided a personal trainer after the film completed to lose weight, though she actually didn’t need the help and lost it on her own). Together the two features offer a strong overview of the film and Ferreri’s career and his work.

The final feature is a short clip from the film’s Cannes Film Festival news conference, where Ferreri and his actors have gathered, but the short, barely 2-minute clip is all about Ferreri as he goes off (and how!) on a reporter who asks the filmmaker about something he said of the film, which Ferreri denies he ever said. Great stuff!

Arrow then includes one of their wonderful booklets (which may be limited to the first printing of the release only), which starts off with a great essay on the film by “Best British Horror” editor Johnny Mains (who likes Chicken Tikka Masala) who offers his own thoughts on the film and the impact it had (on audiences and on future filmmakers). This is then followed with a fairly large collection of “Contemporary Reviews” covering the film, most of which were, unsurprisingly, not great, some even downright brutal, while others found it to be fun. Michael Brooke then writes about the film’s troubles with BBFC, who surprisingly allowed the film to be released unaltered (though not until the 90's), but even then that didn’t stop others from still trying to get it banned. Mains then puts together a list of the dishes that appear in the film. As usual Arrow provides a fabulous booklet that adds further insights into the film.

It’s not a stacked edition, and I’m disappointed somewhat we didn’t get a full-feature commentary (the brief track we get is decent but really only skims the surface), but there is some great stuff on here and it’s all worth the time to go through.

Arrow does another spectacular job, giving this delightfully bizarre film a superb presentation and a strong roster of extras. Comes with a very high recommendation. 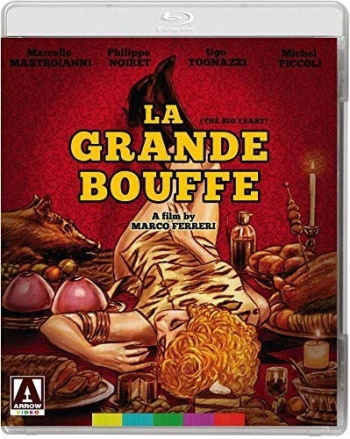