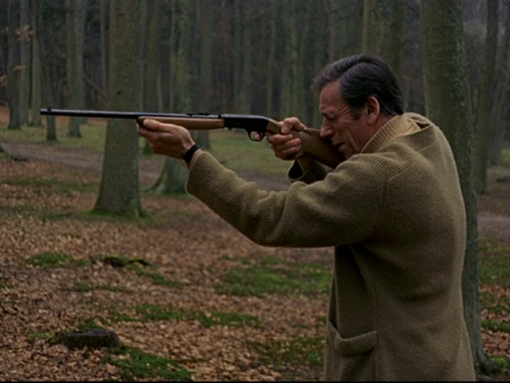 Master thief Corey (Alain Delon) is fresh out of prison. But instead of toeing the line of law-abiding freedom, he finds his steps leading back to the shadowy world of crime, crossing those of a notorious escapee (Gian Maria Volonte) and alcoholic ex-cop (Yves Montand). As the unlikely trio plots a heist against impossible odds, their trail is pursued by a relentless inspector (Bourvil), and fate seals their destinies. Jean-Pierre Melville's Le cercle rouge combines honorable anti-heroes, coolly atmospheric cinematography, and breathtaking set pieces to create a masterpiece of crime cinema.

The Criterion Collection's original DVD edition for Jean-Pierre Melville's Le cercle rouge presents the film in the aspect ratio of about 1.66:1 on the first dual-layer DVD of this two-disc set. The image has been enhanced for widescreen televisions. The standard-definition presentation comes from a high-definition master that was scanned from a 35mm interpositive.

The colour grading for this film has been all over the place with Criterion, each of their editions modifying things, sometimes in a staggering manner. This DVD is an odd one, seeming to lean warmer in some areas in comparison to the StudioCanal DVD (which featured a heavier blue tint) and even Criterion's own Blu-ray, cool in some others, and then more natural in a handful of sequences. I don't know what's right, though this presentation doesn't have that "black-and-white-in-color" look I'm sure Melville was going for while also making the day-for-night climax quite a ways brighter, almost like it's taking place in the late afternoon.

Forgetting colours, though, the rest of the presentation is pretty mediocre, even for DVD. Compression isn't the best, the noise levels getting pretty bad at times, and the restoration, while decent, has still left behind a number of larger marks, frame shifts, and so on. Again, the format is limited, but even this presentation is open to improvement. 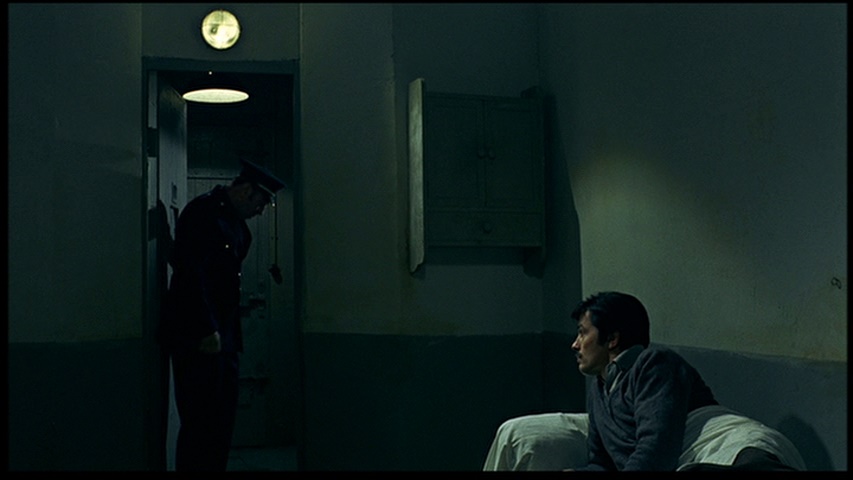 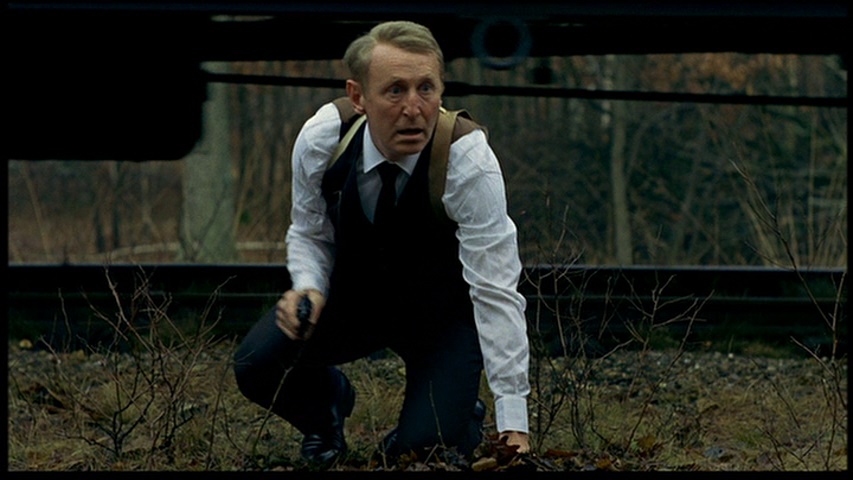 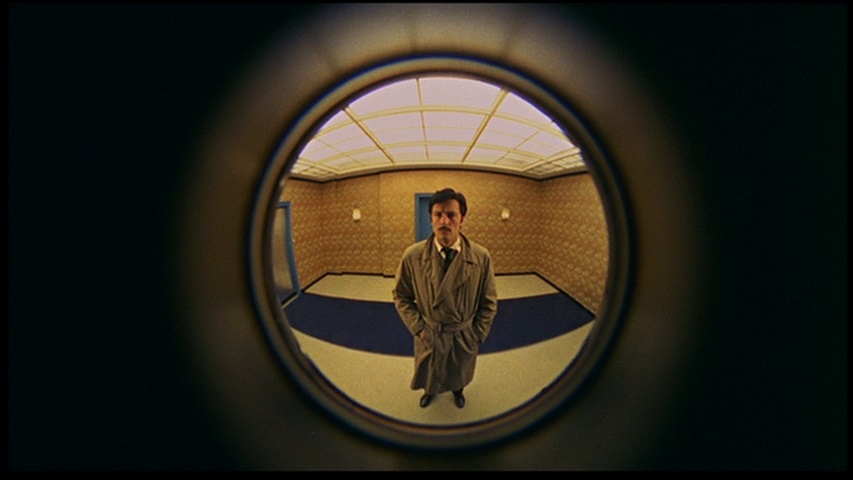 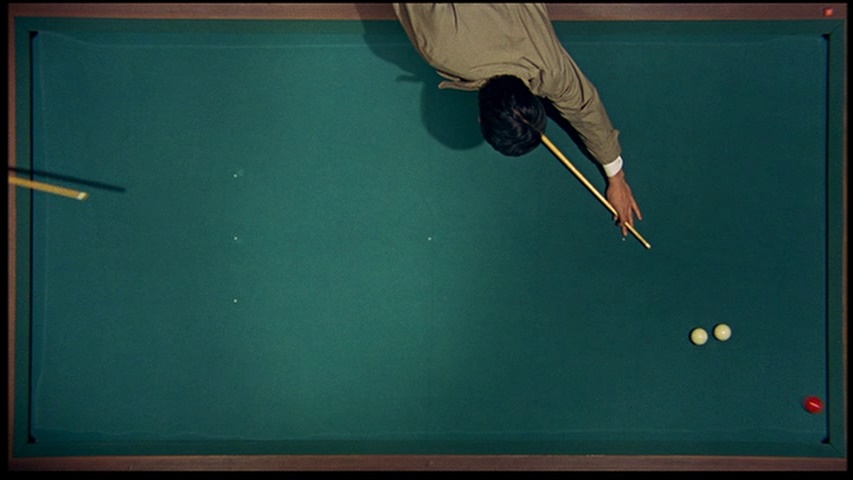 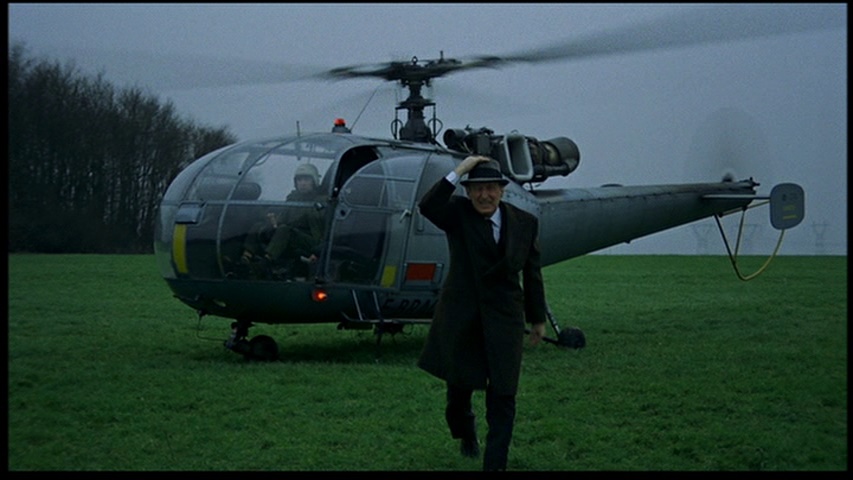 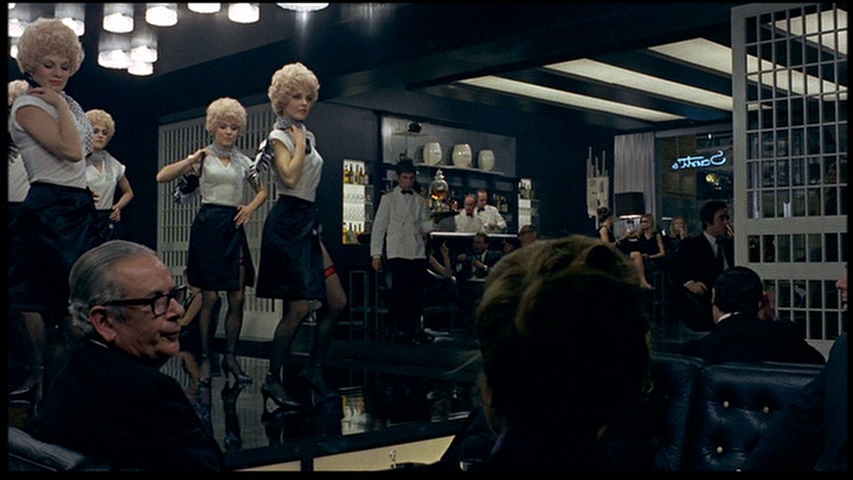 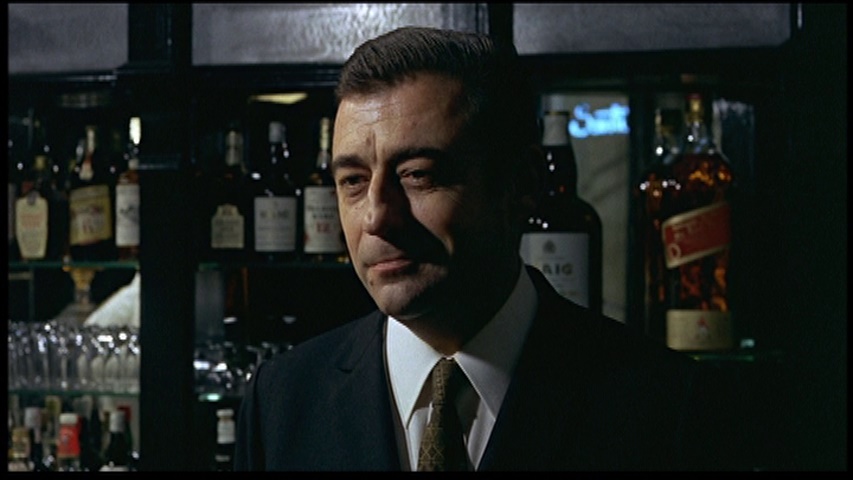 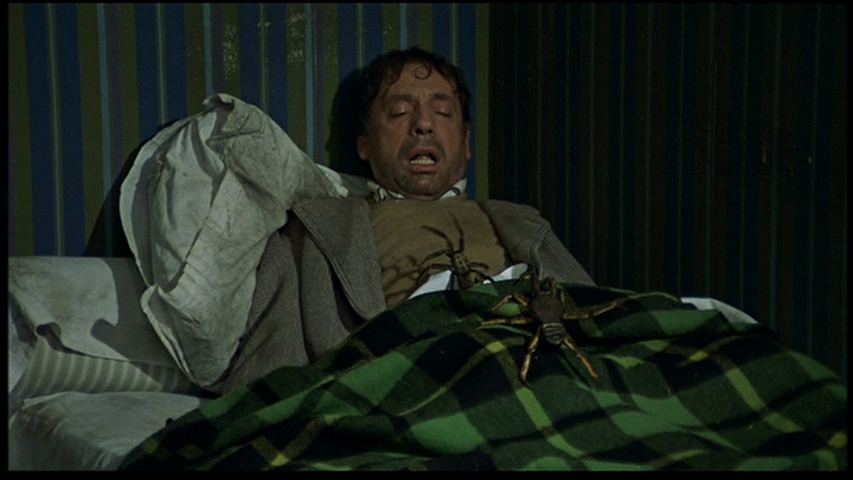 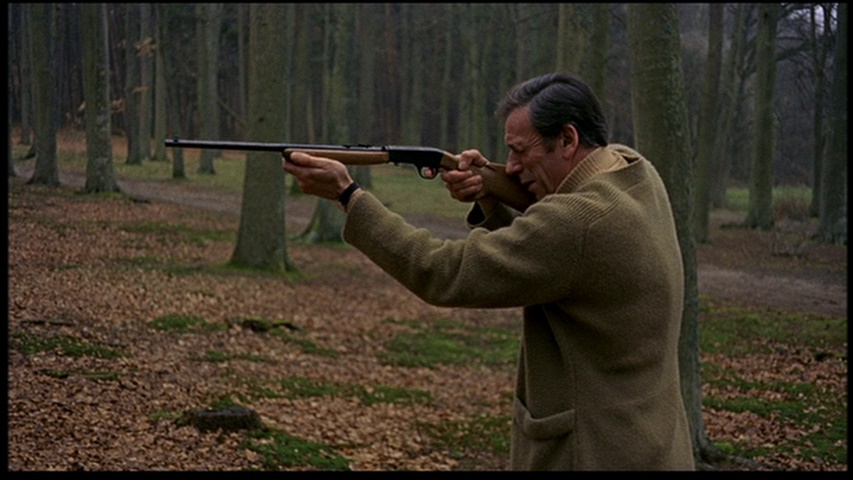 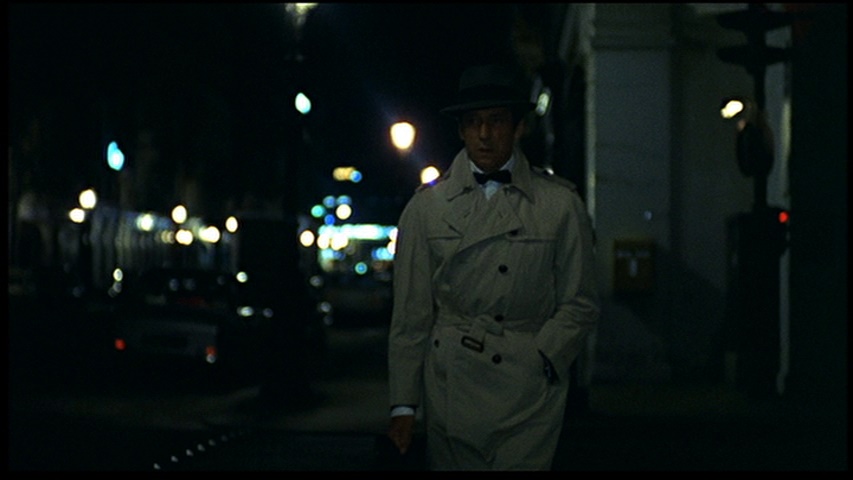 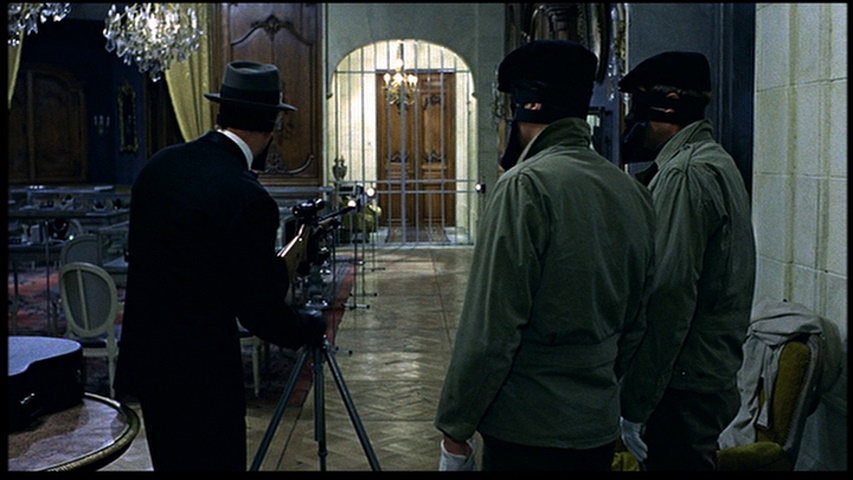 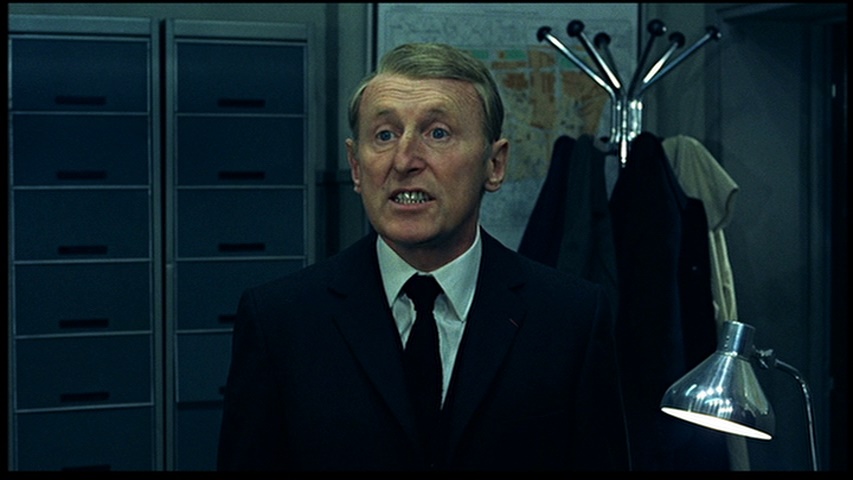 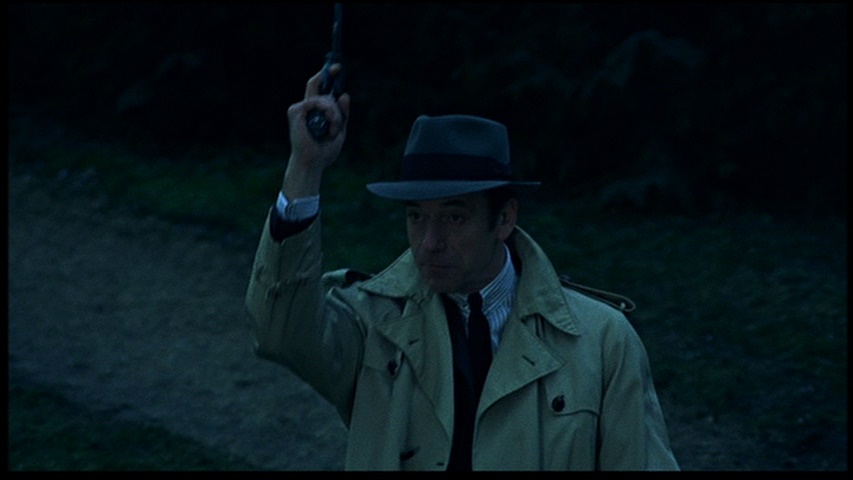 The Doldby Digital 1.0 monaural soundtrack comes off a bit flat and tinny a lot of the time, but it's generally clean and free of distortion.

Criterion devotes all of the second dual-layer disc to the supplements, starting off with 27-minutes' worth of excerpts from the French program Cinéaste de notre temps and its episode entitled “Jean-Pierre Melville: Portrait en 9 poses”. The episode attempts to present Melville’s daily routine while working, concentrating on nine aspects, though only six of those are presented here. Throughout he discusses various topics filmmaking, covering topics like his studio, the intense process that goes into writing his films (which he interestingly prefers to do with little light), and his editing process, before expressing his love for American films and his desire to translate those films to a French/European audience. It’s a good presentation though I’m disappointed the whole segment isn’t included here and am not entirely sure why this is the case, and this has carried on through all of Criterion's editions since this DVD.

The remaining archival segments are all short blips. A segment from Pour le cinema shows some behind-the-scenes footage from the filming of Le cercle rouge’s ending. The 5-minute clip presents a little bit of conversation about the lack of women in Melville’s film along with quick interviews with the director, Delon, Montand, and Bourvil, the last three talking about their other work from this time on top of this film. Following this is a 4-minute segment from Midi Magazine, which features Melville talking about the police thriller as a genre and the restrictions of the urban landscape, which is followed by another 4-minute clip from Vingt-quatre heures sur la deux, which features Melville and Delon talking a little about Le cercle rouge and their other work together. The final segment, running 10-minutes, is made up of excerpts from Morceaux de bravoure, the director talking about Le cercle rouge and why it took so long for him to get around to making it.

We then get two new-at-the-time interviews, first with assistant director Bernard Stora, who chats for 30-minutes about first meeting Melville, the director’s love for just about all things American, and his processes that went into filmmaking, whether it be around his writing at night or how he generally worked on set. He talks a little about the troubled working relationship between Melville and actor Gian Maria Volonté while filming Le cercle rouge, and gets into some more personal aspects of Melville, like his love for animals (apparently he was a cat guy, which I never would have figured). It’s still a decent, reflective interview.

The final interview is then with Rui Nogueira, who wrote the book Melville on Melville. He starts things off by talking about the beginnings of his book, which started out as a book featuring a collection François Truffaut, but after Nogueira found he had no chemistry with Truffaut, making for an awkward interview, he moved on to Melville. He was on the set of Le cercle rouge but sadly can’t recall much due to him being so focused on the book, yet is still able to share a little more about the director’s issues with Volonté. He also shares Melville’s original ideas for the cast, which included Lino Ventura and Jean-Paul Belmondo. Despite the handcap of Nogueira not being able to recall filming all that much, this is probably the more interesting interview of the two.

The disc then closes with the film’s trailer and then a re-release trailer that is essentially the same but with "John Woo Presents" added to the title card. The included booklet then features an excellent essay on the film by Michael Sragow, followed by a reprint of an interview with Melville on the film. The booklet then also features a reprint of an interview featuring composer Eric Demarsan talking about scoring for Melville’s film, an essay by Chris Fujiwara explaining the meaning behind the film’s title, and then a short note by John Woo, writing of his admiration for Melville and this film.

For a two-disc set the features feel incredibly slim, the dual-layer disc feeling to be overkill; all of this could have probably fit on a single-layer one. They're well worth going through but there's an academic slant missing (outside of the booklet) that leaves one wanting. 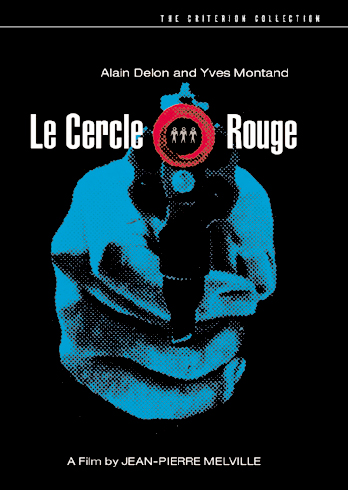