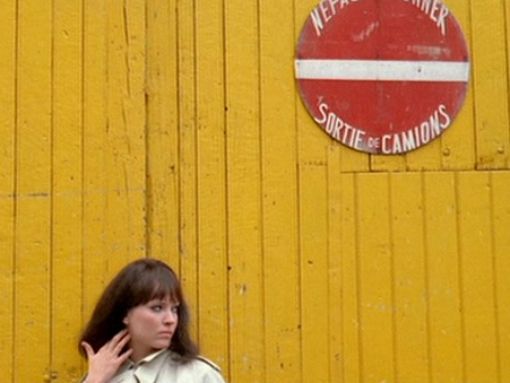 With its giddily complex noir plot and color-drenched widescreen images, Made in U.S.A was a final burst of exuberance from Jean-Luc Godard’s early sixties barrage of delirious movie-movies. Yet this chaotic crime thriller and acidly funny critique of consumerism—starring Anna Karina as the most brightly dressed private investigator in film history, searching for a former lover who might have been assassinated—also points toward the more political cinema that would come to define Godard. Featuring characters with names such as Richard Nixon, Robert McNamara, David Goodis, and Doris Mizoguchi, and appearances by a slapstick Jean-Pierre Léaud and a sweetly singing Marianne Faithfull, this piece of pop art is like a Looney Tunes rendition of The Big Sleep gone New Wave.

After many years in legal limbo Made in U.S.A. makes its North American home video debut from Criterion presented in its original aspect ratio of 2.35:1 on this dual-layer disc. The image has been enhanced for widescreen televisions.

The digital transfer is nothing short of spectacular, easily one of the most impressive colour transfers yet from the company. It’s sharp, crisp, and clean. I couldn’t detect any troublesome digital artifacts of any kind. The image looks quite smooth all around and detail is very high (film grain is present throughout.) The film is quite colourful and colours are beautifully saturated, bright, and vibrant. Reds are especially wonderful.

The restoration is also very impressive with only a few minor blemishes present including a few specs of debris and some vertical lines present on occasion. Other than this issue the picture quality overall is strong, the digital transfer itself being near-perfect. It’s an incredible shame that Criterion chose not to release this on Blu-ray. 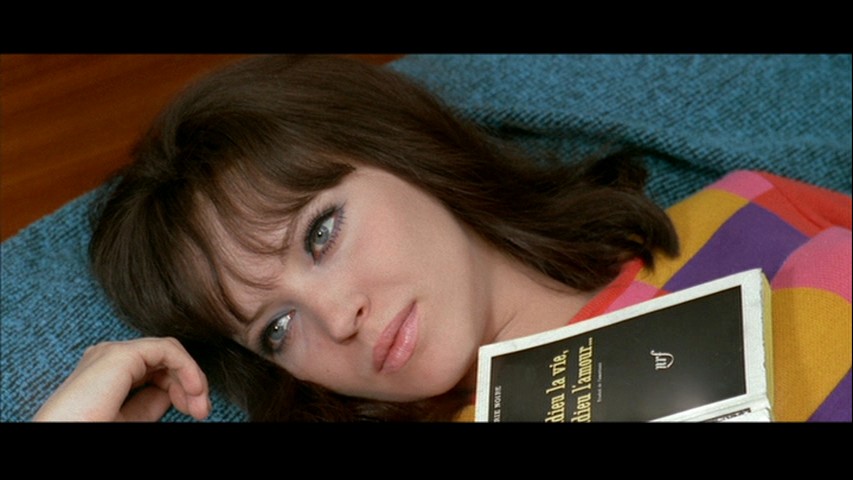 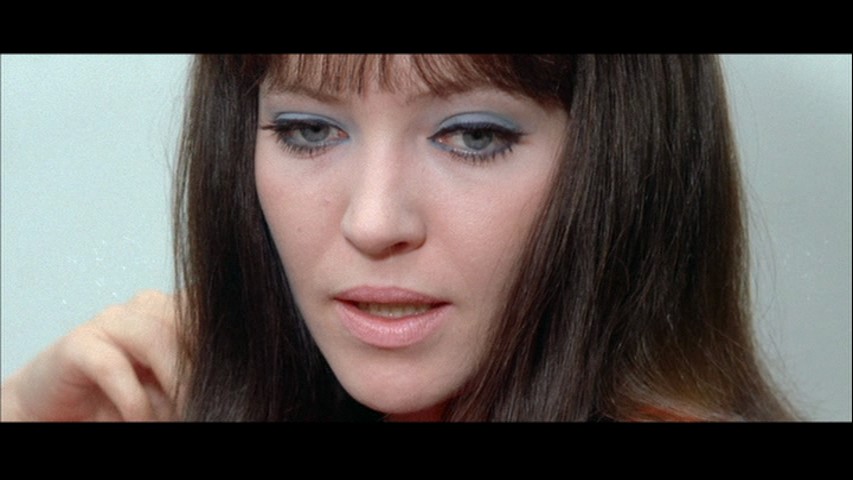 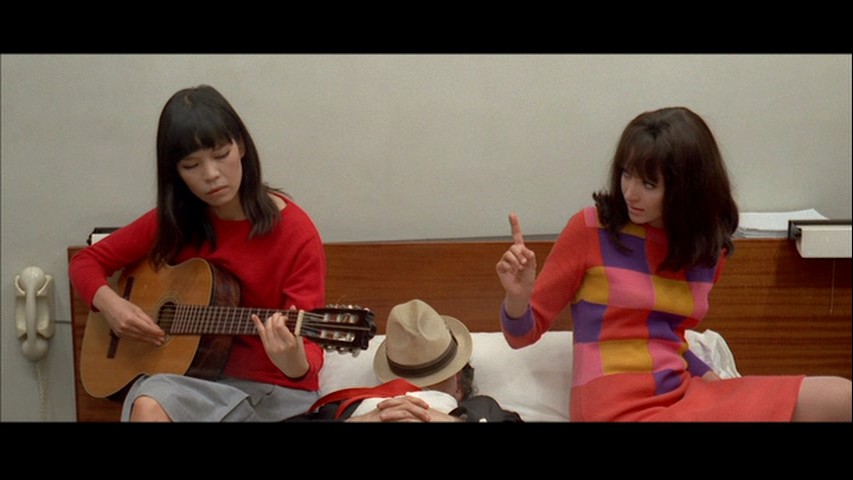 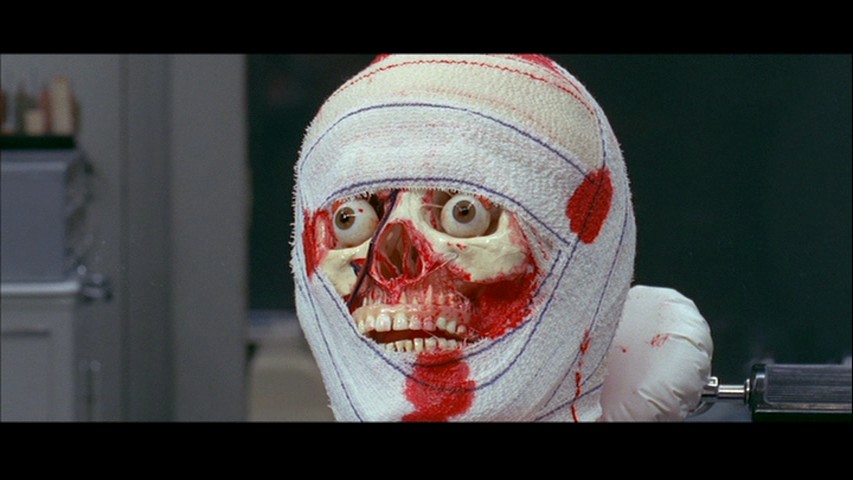 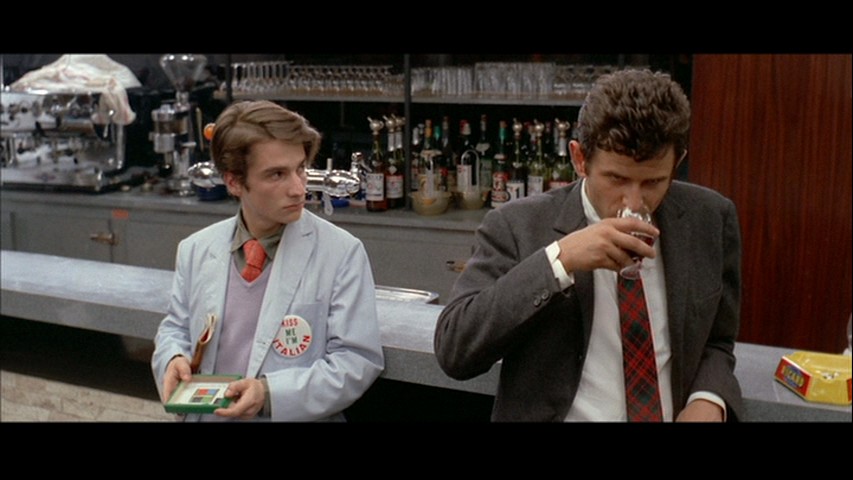 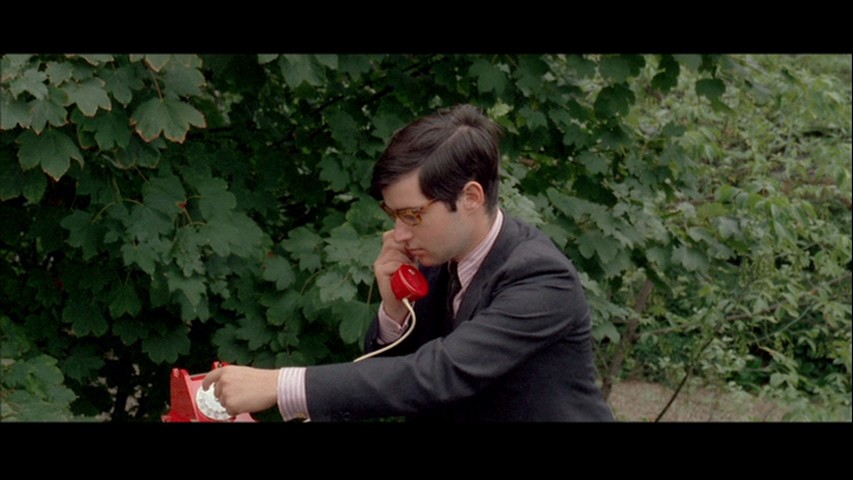 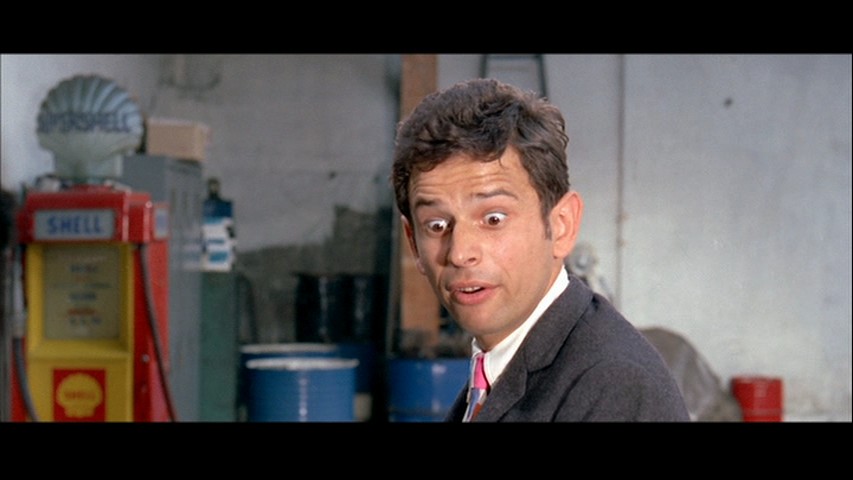 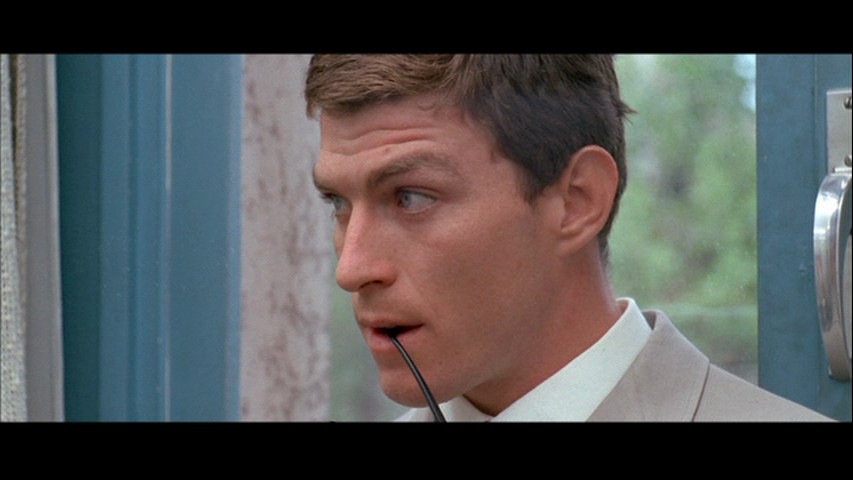 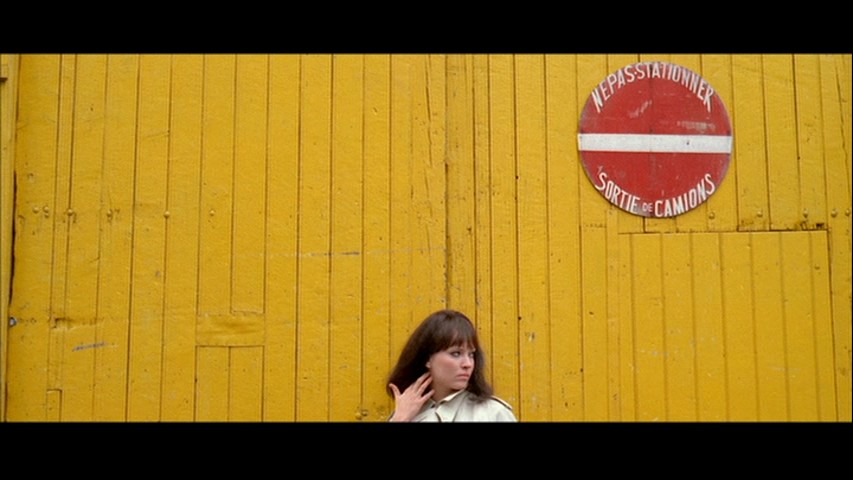 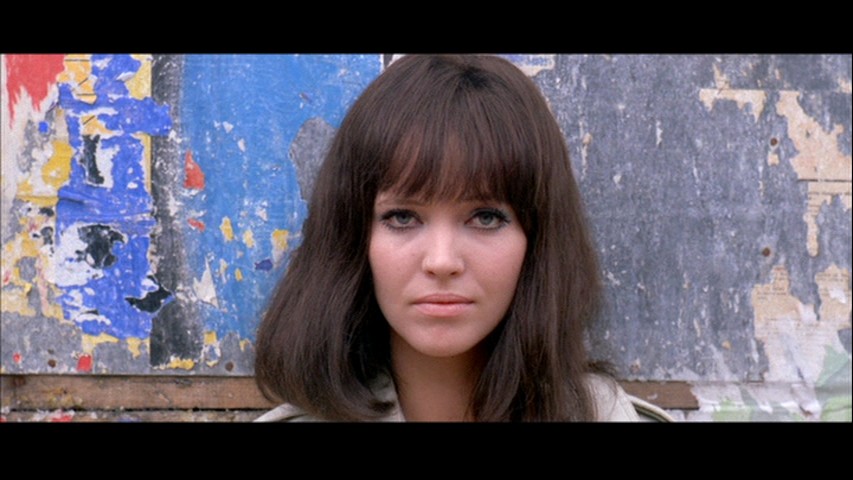 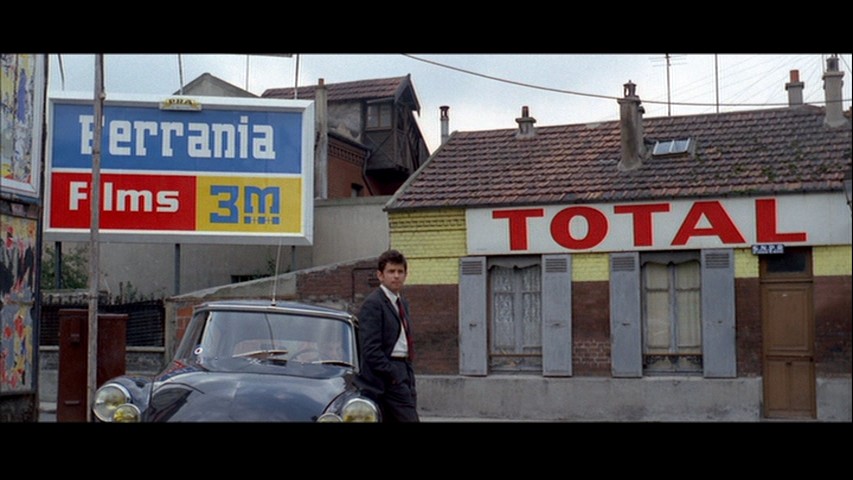 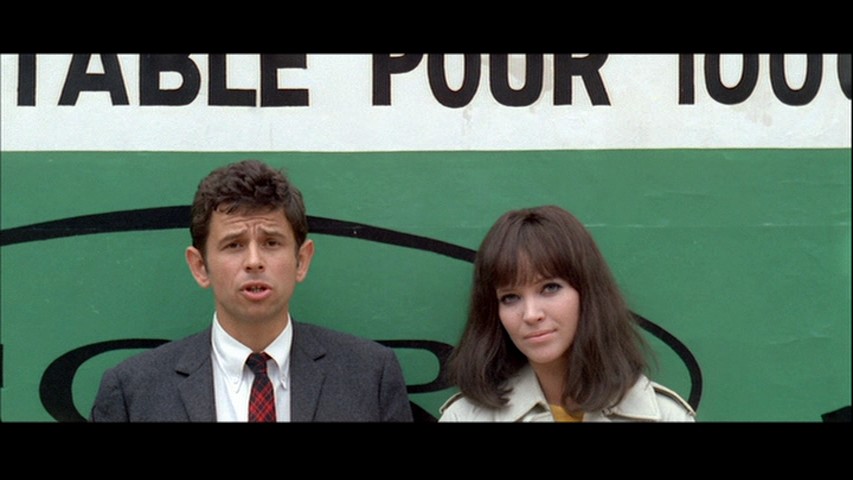 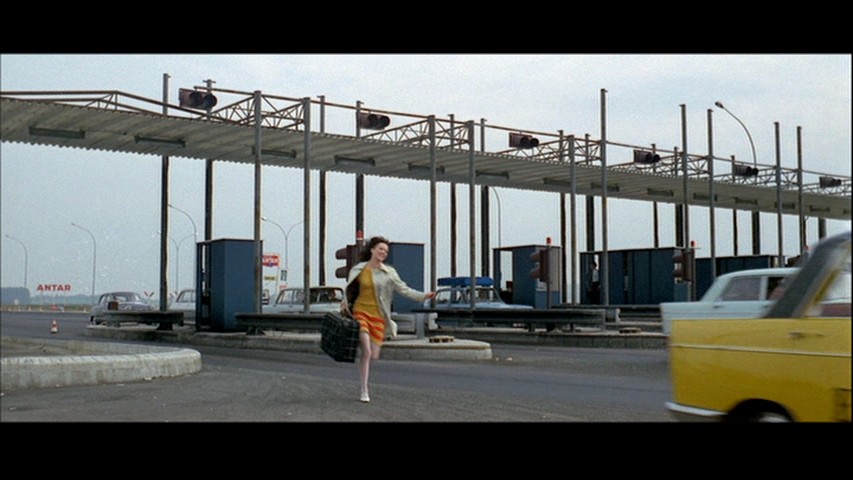 The French Dolby Digital 1.0 mono track isn’t as spectacular as the image but it’s serviceable. Dialogue sounds clean and natural and Godard’s loud, sudden effects do startle. But it can sound a little harsh and edgy at times, though it may have more to do with the source materials. Not spectacular but good enough.

Criterion has released this as a lower-tier title but have still managed to put in some wonderful supplementary material making this release a great bargain.

First up is a documentary/interview called On the Cusp, featuring interviews with Godard biographers Richard Brody and Colin MacCabe. The title refers to this film (and 2 or 3 Things I Know About Her) marking the beginning of the period where Godard would make his transition from playful genre “movie-movies” to his more intense political films. In it the two talk about this period of Godard’s life, personal problems (such as the deterioration of his marriage to Anna Karina and Marina Vlady’s rejection of his marriage proposal) and his mindset. Running 26-minutes they offer a wonderful analysis of this period of Godard’s career and both Made in U.S.A. and 2 or 3 Things I Know About Her.

Next up is a short 10-minute 2002 interview with actress Anna Karina which I assume comes from a region 2 DVD release. In it she recalls how she first met Godard and then how the Made in U.S.A. project came up. She also reflects on her other works with the director and speaks highly of him, even feeling the need to point out how athletic the man is/was (can’t say if he still is.) While I know there materials covering their relationship I must unfortunately plead ignorance since this kind of stuff doesn’t interest me and admit I don’t know much about it other than they were married and then divorced a few years later, but whatever the circumstances were behind the break-up she does speak fondly of him. I’m sure there’s far more material on the subject (and I believe the Criterion release of Godard’s Pierrot le fou has a feature that gets more into it but I have not picked up that DVD yet despite my fondness for the film) but this brief interview is a decent piece.

A little more disappointing is a short 6-minute interview with László Szabó recorded exclusively in 2009 for this DVD release. While Szabó is obviously rather emotional about recalling this time (he appears heartbroken over what happened between Godard and Karina) I was rather disappointed he didn’t have much to offer about the film. The interview is primarily made up of him recalling first working with Godard, the director and Karina’s relationship, and then briefly recalling the sequence where Karina and him were shooting the one scene where the two had to speak their lines at the same time. I was actually expecting more from this one I guess. I’m hoping there’s the possibility that Criterion actually recorded more material with him for another DVD release (maybe they’re planning a DVD for Le petit soldat…) but I’m hoping they didn’t put all their resources into just interviewing him for this film.

A rather cool feature would be Made in U.S.A.: A Concordance, which is a 17 and a half minute video essay pointing out the many references that appear in the film, from the loose adaptation of the novel “The Jugger” and then listing through where all the character names come from (referencing directors, actors, and even characters that appear in other films. He also explains why Godard ended up censoring the name Politzer in the film, and also gets into great detail about the film’s key influence, the “Ben Barka affair”. I was able to pick out a lot of the influences from the subtle (Richard Widmark, Otto Preminger, and Kenji Mizoguchi) to the bleeding obvious (Richard Nixon, Robert McNamara) but there were quite a few I was unfamiliar with including the Ben Barka affair.

The disc then closes off with two theatrical trailers: The original trailer which is silent, and then a Rialto re-release trailer that pretty much recreates the original though adds book ends to it.

The booklet includes an essay by J. Hoberman that is a great read, offering a fantastic analysis for the film and even further explaining Godard’s intentions, how this film marks the beginning of a transition to his more political work, the influences (including a more in-depth look at the “Ben Barka affair”) and the various themes present. It’s a great read and put together with some of the other features it actually makes up for the lack of an audio commentary.

I’m amazed sometimes Criterion doesn’t feel all that inclined to include an audio commentary for Godard’s films (of all the Godard release from Criterion only Contempt and 2 or 3 Things I Know About Her come with tracks) and this film could benefit from one but Criterion does still make up for the lack of one through most of its features including the booklet, the 26-minute documentary, and of course the video essay on the various references. Nice collection of supplements for a good price.

I’m admittedly one of those people that prefers Godard’s earlier work to his later work and as such I was a little torn on this one, this being my first time with it. As the supplements point out it does combine his two periods and I found it a little scattershot but I was relieved to find I wasn’t alone in thinking this after going through the everything on the DVD (Brody and MacCabe seem to have some of the same issues with it.) But it’s a wonderful DVD release and one Godard fans will certainly need to pick up. The supplements really did help me appreciate and understand the film a little more and I liked going through them; they even made me watch the film again. But the best aspect of the DVD is the transfer, which is probably one of the best colour transfers I’ve ever seen from Criterion. It’s nothing short of stunning. 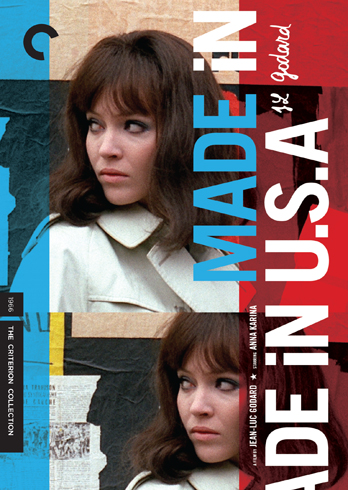