﻿ My Dinner with André Review :: Criterion Forum
The Criterion Collection

My Dinner with André 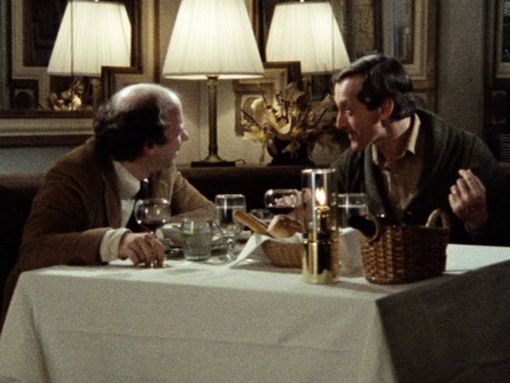 In Louis Malle's captivating and philosophical My Dinner with André, actor and playwright Wallace Shawn sits down with friend and theater director André Gregory at a Manhattan restaurant, and the two proceed into an alternately whimsical and despairing confessional on love, death, money, and all the superstition in between. Playing variations on their own New York-honed personas, Shawn and Gregory, who also wrote the screenplay, dive in with introspective, intellectual gusto, and Malle captures it all with a delicate, artful detachment. A fascinating freeze-frame of cosmopolitan culture, My Dinner with André remains a unique work in cinema history.

Criterion presents Louis Malle’s My Dinner with André in the aspect ratio of 1.66:1 on the first dual-layer disc of this two disc set. The image has been enhanced for widescreen televisions. The film has, as far as I’ve known, only been available in full frame ratios on home video prior to this (even on DVD) and I actually always thought 1.33:1 was the original aspect ratio but the included booklet states that 1.66:1 is the film’s original aspect ratio (of course this could be incorrect). The framing doesn’t suggest too much is being trimmed on the top and the bottom and looks to be framed correctly.

I actually haven’t seen the previous Fox Lorber DVD only having seen the film a few times on a well used VHS tape. I never picked up the Fox Lorber since, judging from my experience with some of their other discs, it wouldn’t have been much of an upgrade. While I can’t compare to previous DVD releases I feel pretty confident that this is the best the film has looked on home video. It’s an incredibly sharp looking image with a great amount of detail. Grain is fairly prominent (this was taken from a 16mm A/B negative) but looks natural for the most part; occasionally it can look like digital noise. Colours look very good with excellent saturation despite the film’s very limited palette. The print is also in amazing, near-perfect shape, probably the biggest surprise for me considering the age and indie nature of the film.

A pleasant surprise. I actually was expecting an okay looking image, but it managed to outdo my expectations.

(I tried to add variety to my screen captures below but considering the nature of the film I’m sure most will excuse the repetitive nature of them.) 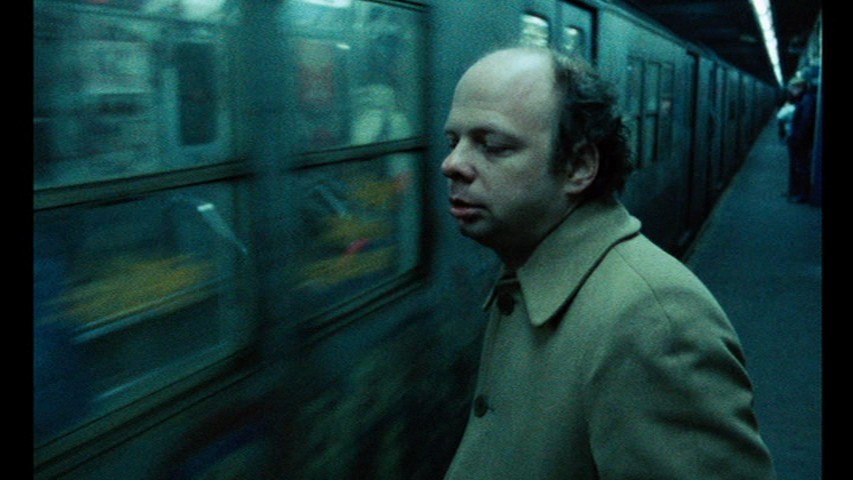 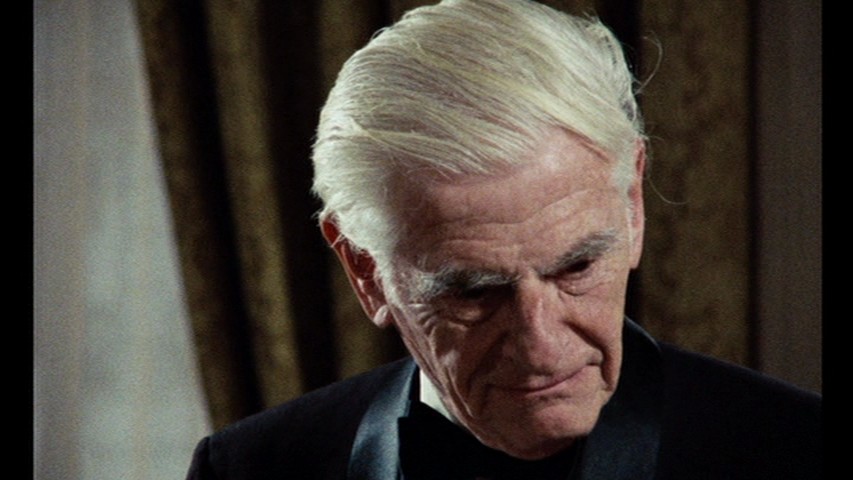 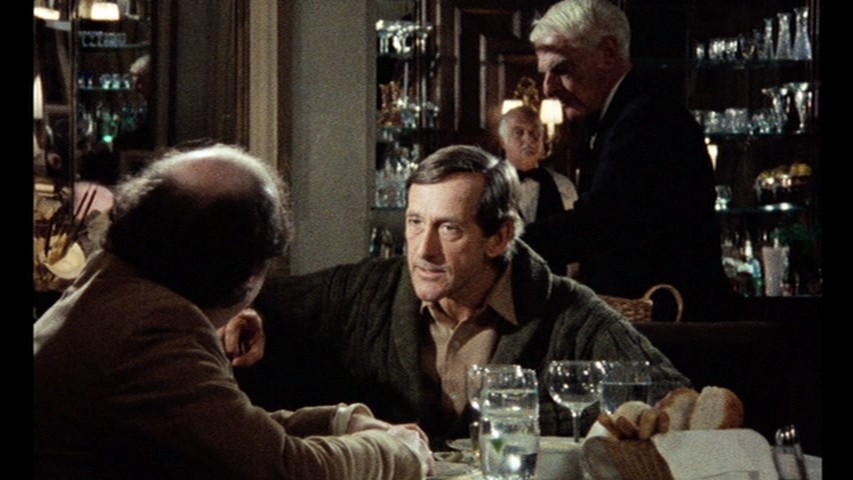 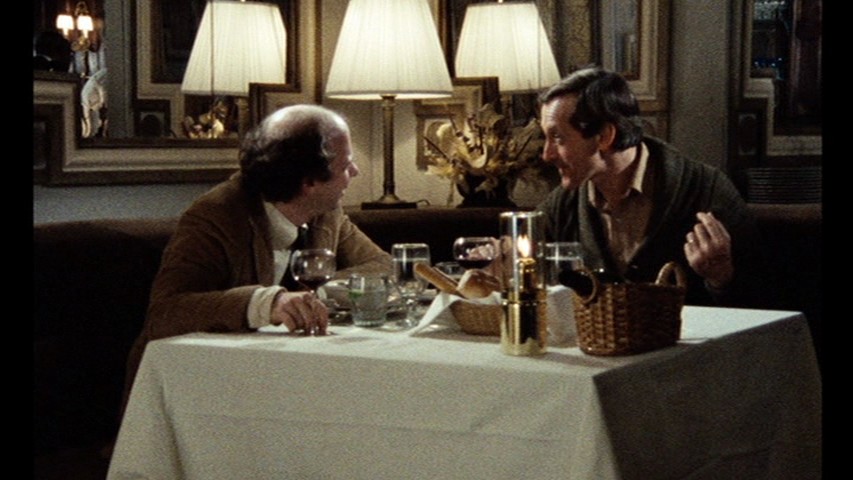 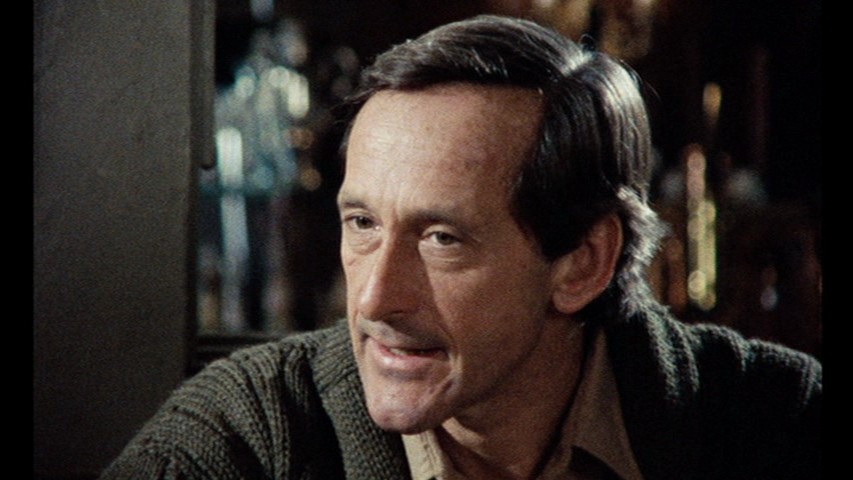 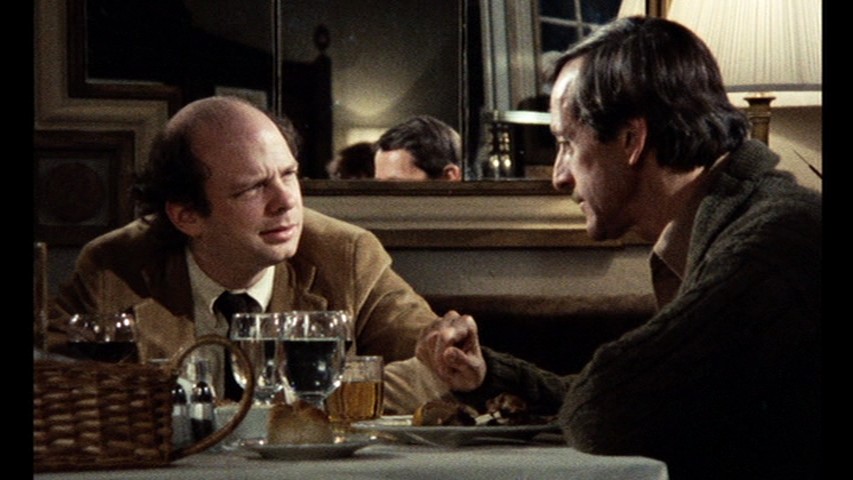 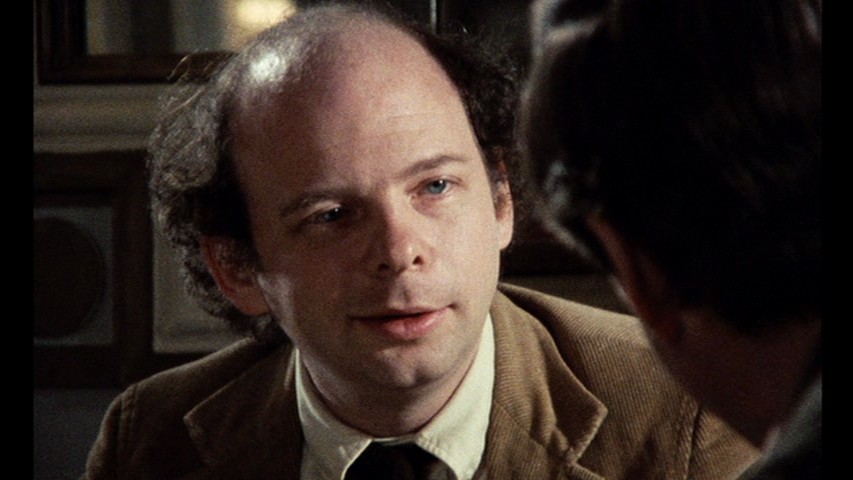 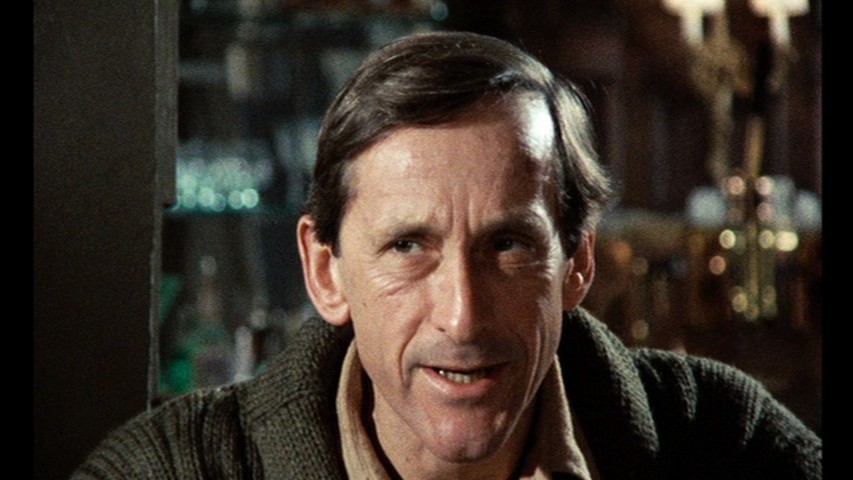 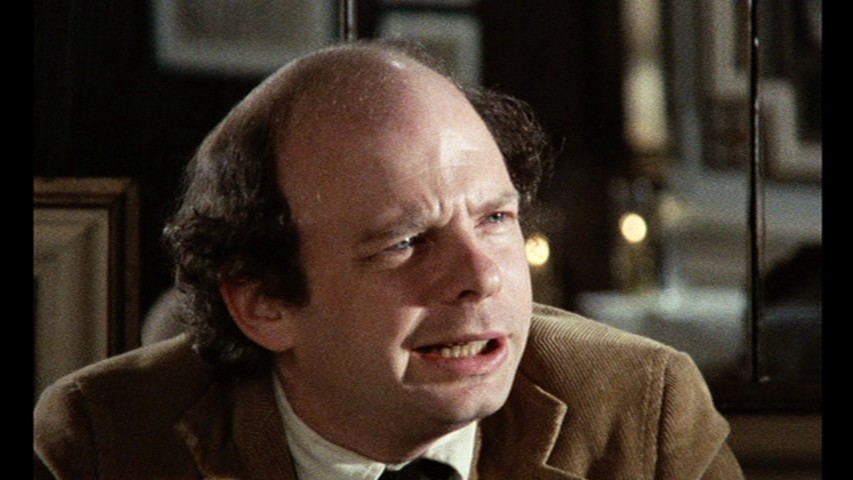 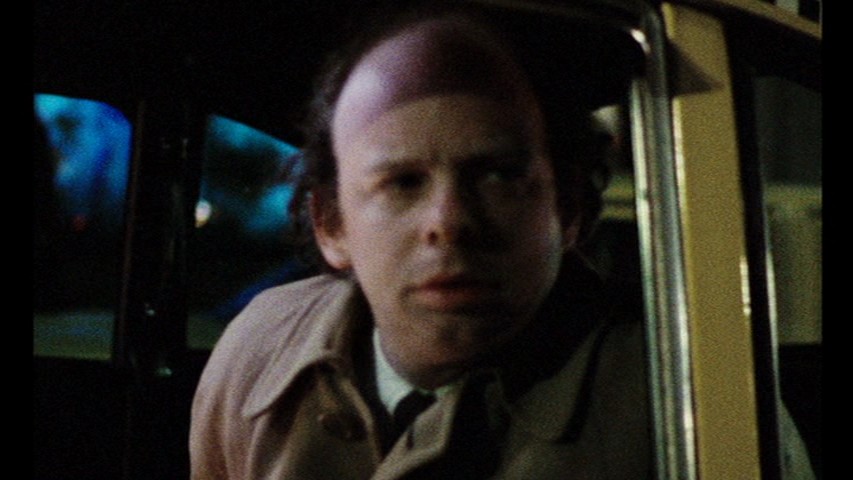 Criterion presents a serviceable English Dolby Digital mono track. Needless to say there isn’t anything fancy going on in this film so it’s not a stunning track but it is quite sharp and very clean with strong volume presenting clear, articulate dialogue. Works perfectly for the film in question.

Extras are slim on this two-disc set. The first disc only presents the film while the second dual layer disc presents all of the set’s supplements. There are unfortunately only two, but they’re both rather long and were given their own disc to keep a higher bitrate for the film (I assume in any case.)

The first supplement is an hour long interview with André Gregory and Wallace Shawn conducted by Noah Baumbach and filmed exclusively for Criterion. Unfortunately the two have been filmed separately, Gregory interviewed at what I am guessing is his home, and Shawn in what I am also guessing is the Criterion office. You can watch both interviews together or watch each one individually, though the Gregory interview will still run into the Shawn interview. Gregory gets 31-minutes of the interview, while Shawn gets the remaining 29.

I rather enjoyed it, though it may have been better if the two were together. The two reflect on first meeting at one of Gregory’s plays, and then talk about the writing of the script for My Dinner with André and then getting it made. Gregory actually may be the better of the two interview subjects, coming off more loose and more like he’s enjoying himself, while Shawn almost feels a little more stand offish, but it could come down to the fact I think Baumbach was asking Gregory better questions. Shawn spends more time talking about the writing of the film and the material in the conversations but Gregory talks more of the overall production. He jokes about how they figured it would probably end up being a TV movie or a movie that only their friends would see (neither were probably prepared for just how popular it would become.) They also talk about their characters somewhat, where Gregory was playing a character based on himself while Shawn was playing a character he says he felt different from. Also another interesting little tidbit was that Mike Nichols was first approached about doing the film but he said he was unavailable. Malle was the one that ended up contacting them about directing (Gregory got the call and thought it was a joke.) While it’s a talking heads interview Baumbach and crew get a little more creative at least, setting up the shooting style similar to that of My Dinner with André’s making it a little less stale than similar features. Overall I rather liked this feature and it was a treat catching up with the two. I still feel it’s a shame the two weren’t recorded together.

The second and final disc feature is ”My Dinner with Louis”, a 1982 episode from a BBC program called Arena, featuring an interview between director Louis Malle and actor/writer Wallace Shawn. And of course this interview is done inside a restaurant. It’s a mildly interesting supplement with it’s biggest flaw being that it’s made up more of film clips than interview. In it Malle briefly goes over his career with Shawn talking briefly about the controversy that surrounds some of his work including The Lovers and his documentary Phantom India, which got the BBC kicked out of the country. The rest of the interview has Malle talk about a few of his films, including Lacombe, Lucien, Murmur of the Heart, Atlantic City, and, of course, My Dinner with André. One of the more interesting aspects, Malle’s work as a cameraman for Jacques Cousteau, is only briefly mentioned. It’s a decent enough piece, though feels a bit fluffy.

Criterion includes a 28-page booklet, which includes an essay on the film by Amy Taubin. Also included are the introductions by Gregory and Shawn that prefaced the screenplay and both of which are fun reads. The booklet is also rather cute (I guess the word could be) in its presentation: It’s made up to look like a beat up script with plenty of stains and gives the idea it’s been possibly sitting on a shelf under a stack of books pressing the pages together, the typeface even made to look like its rubbed off on the opposite page. It’s a good read and it has a clever presentation.

Not loaded but they’re a nice couple of supplements, running about 2 hours total. The Malle program was simply okay but the interviews proved better (though I’m again surprised they weren’t recorded together for the interviews or even a commentary.)

Only a couple of supplements but they’re filled with some good material and total just under 2 hours. Of the features I feel the interview is the better one. But transfer will be the real selling point to most I’m sure: It’s a surprise, far exceeding my expectations and is the best I’ve ever seen the film. It’s worth it for this aspect of it alone. 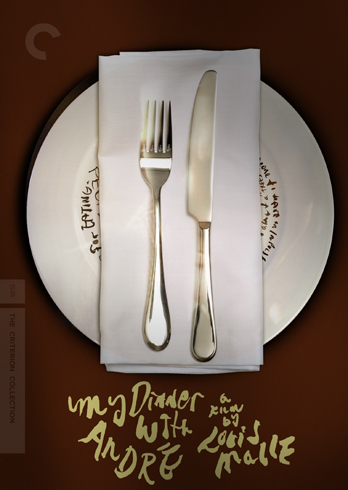 My Dinner with André (Blu-ray)