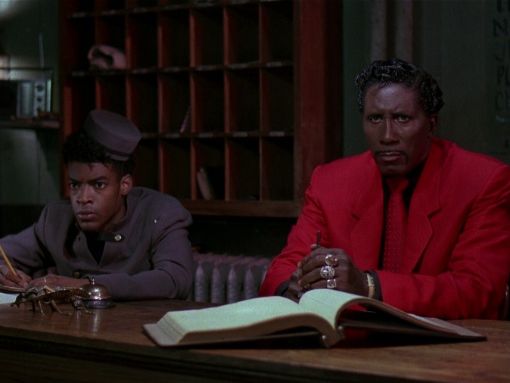 Aloof teenage Japanese tourists, a frazzled Italian widow, and a disgruntled British immigrant all converge in the city of dreams—which, in Mystery Train, from Jim Jarmusch, is Memphis. Made with its director’s customary precision and wit, this triptych of stories pays playful tribute to the home of Stax Records, Sun Studio, Graceland, Carl Perkins, and, of course, the King, who presides over the film like a spirit. Mystery Train is one of Jarmusch’s very best movies, a boozy and beautiful pilgrimage to an iconic American ghost town and a paean to the music it gave the world.

Jim Jarmusch’s Mystery Train gets a much needed upgrade on Blu-ray courtesy of Criterion, the release completely topping MGM’s rather crummy DVD. The film is presented here in the aspect ratio of about 1.77:1 on this dual-layer disc. The transfer is presented in 1080p/24hz.

The transfer itself is perfect without one noticeable issue. The image is crisp, colours look perfectly balanced and saturated (Screamin' Jay Hawkin's amazing red jacket looks beautifully rendered here,) detail is incredibly high, grain is noticeable but not heavy, it retains a very film-like look, and it doesn’t have any noticeable artifacts. I also didn’t notice an instance of edge-enhancement anywhere in the film. And the fact it’s so clean may have a lot to do with the bitrate found throughout the film; checking it every once in a while it was in the high 30s, usually around 35mbps, and it looks all the better for it.

The only problems evident are in the source itself, which still has some specs of dirt and little black marks that appear in what is otherwise an incredibly clean print. Past that the transfer looks stunning, one of Criterion’s best on the format. 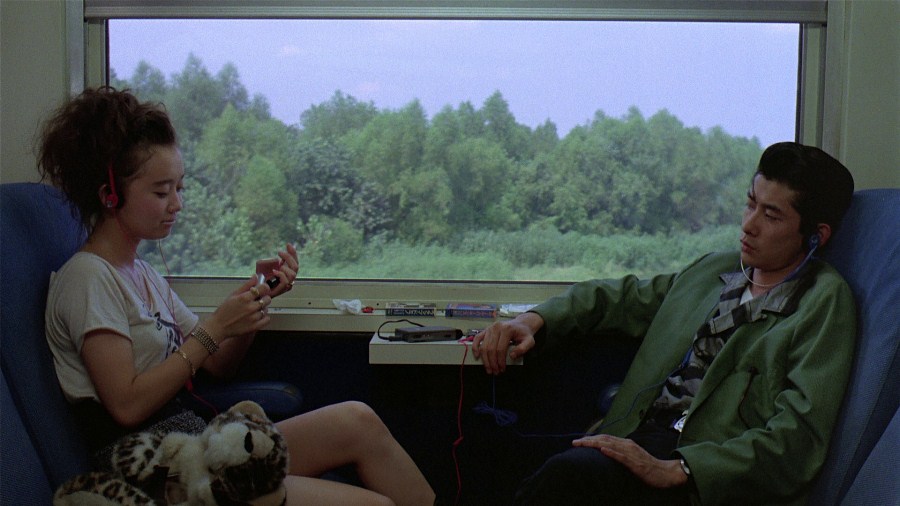 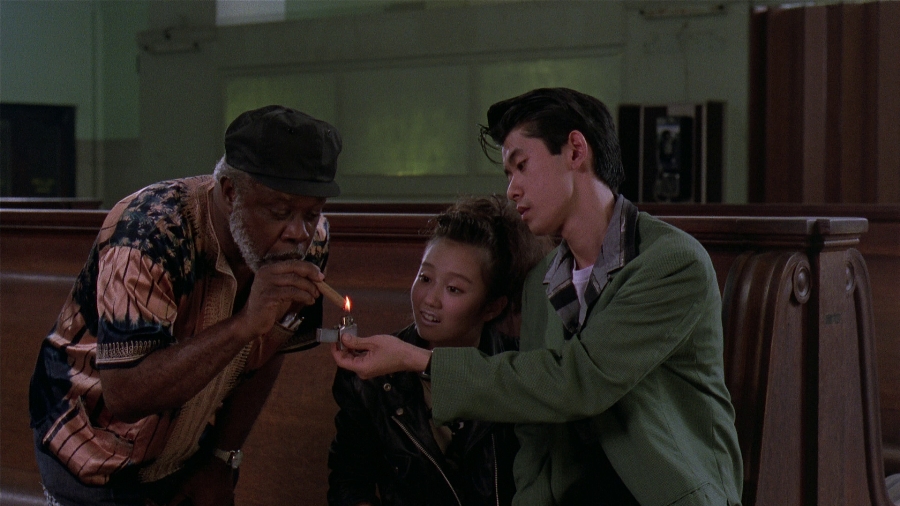 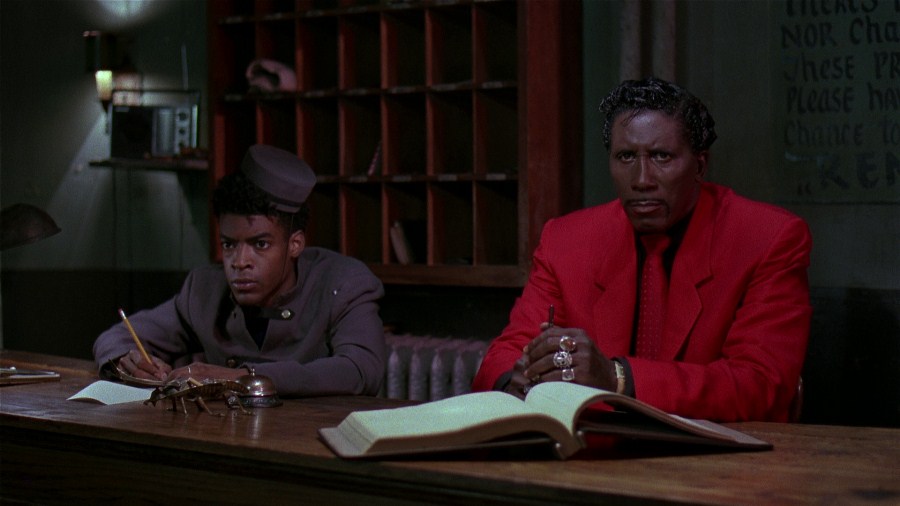 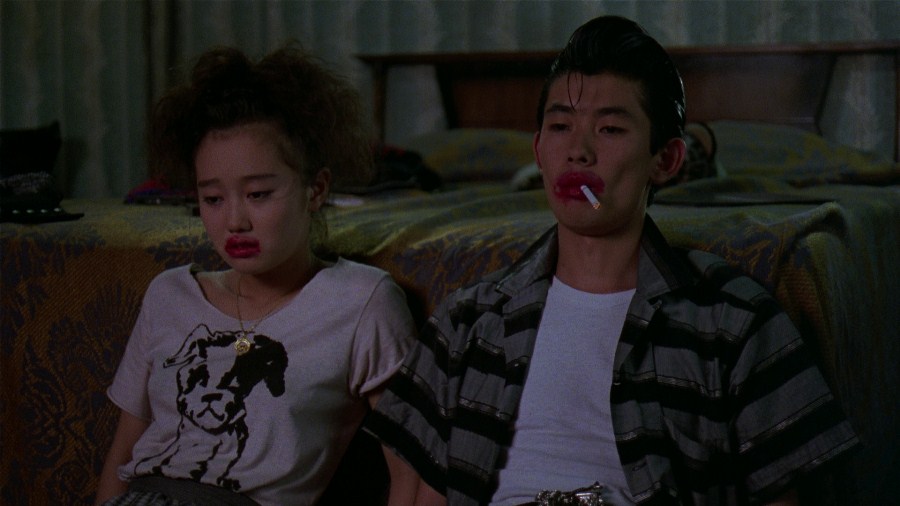 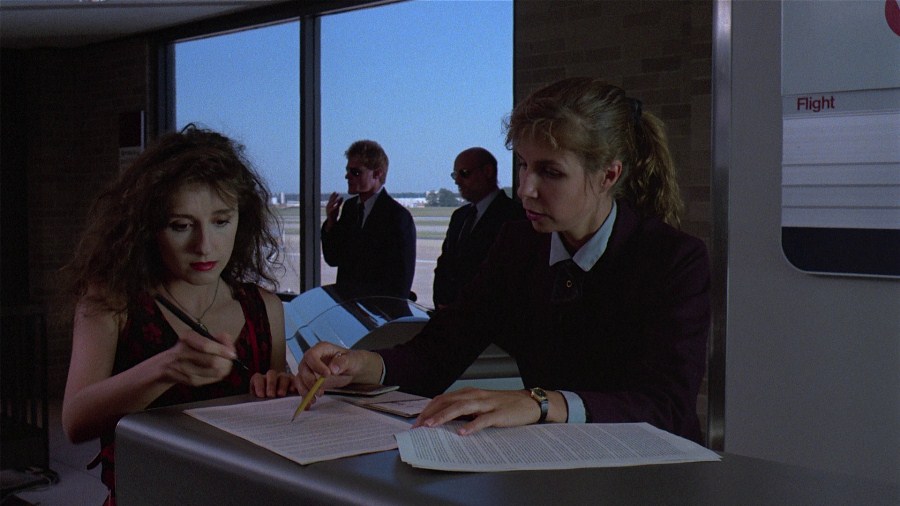 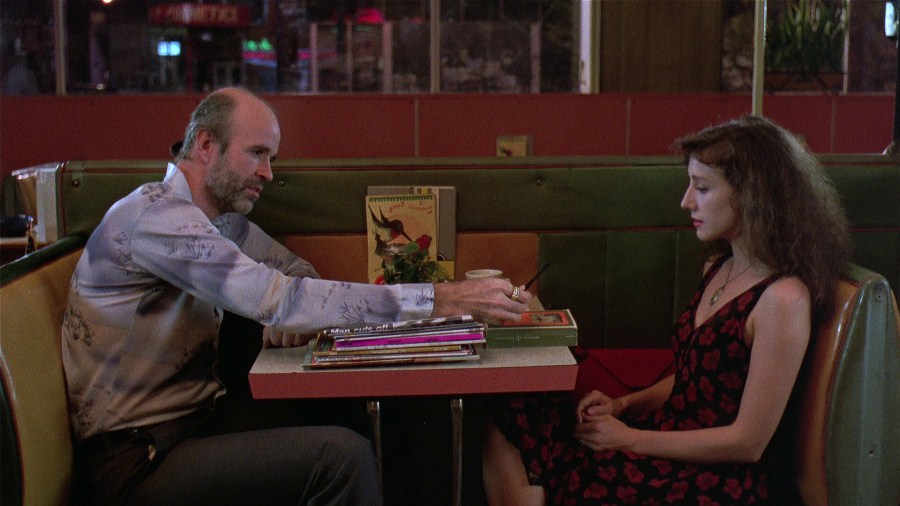 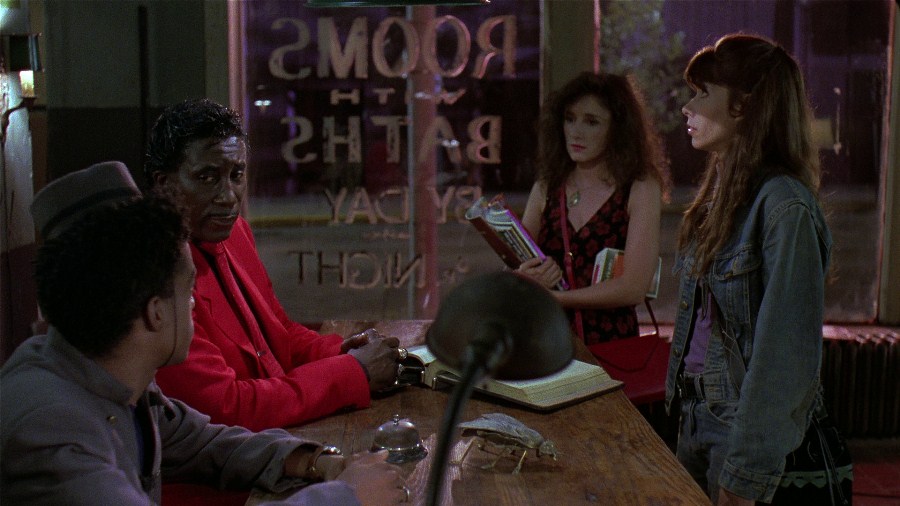 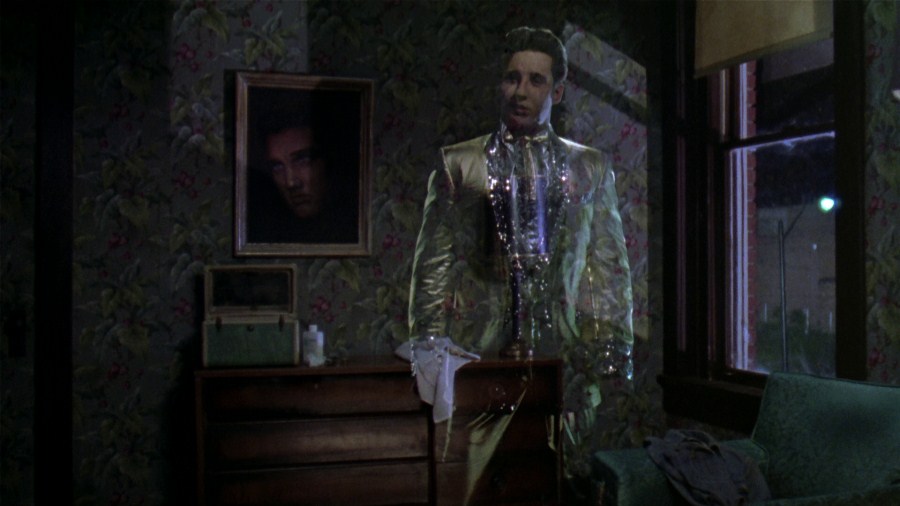 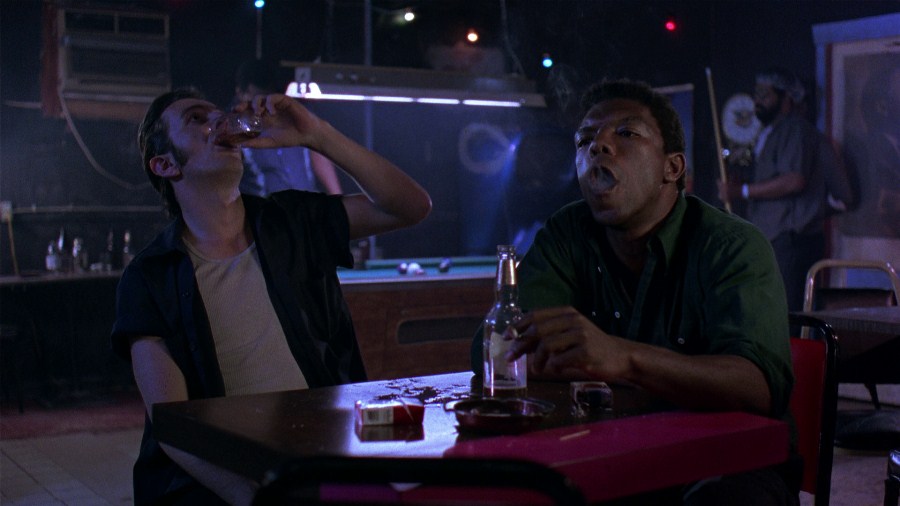 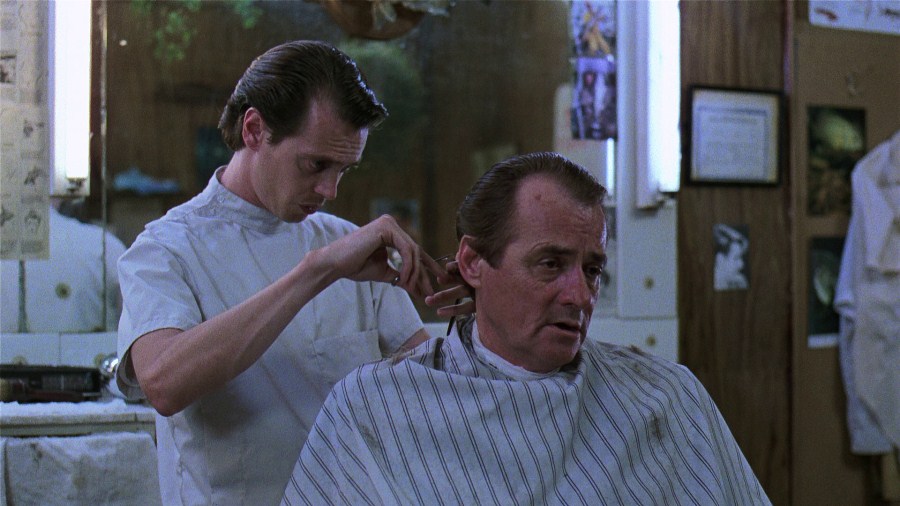 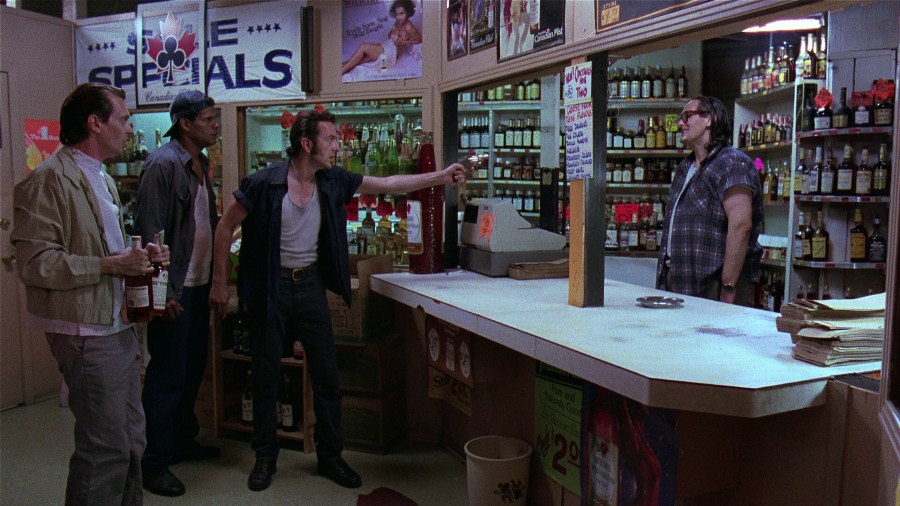 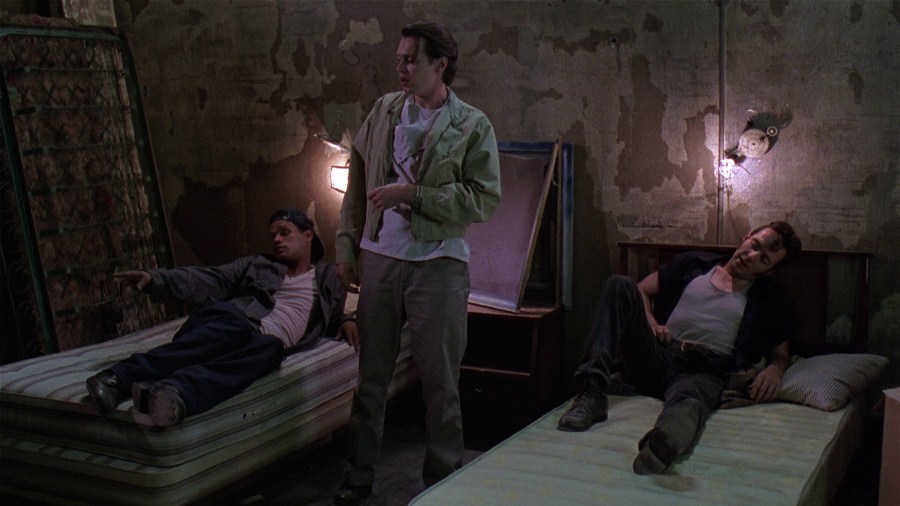 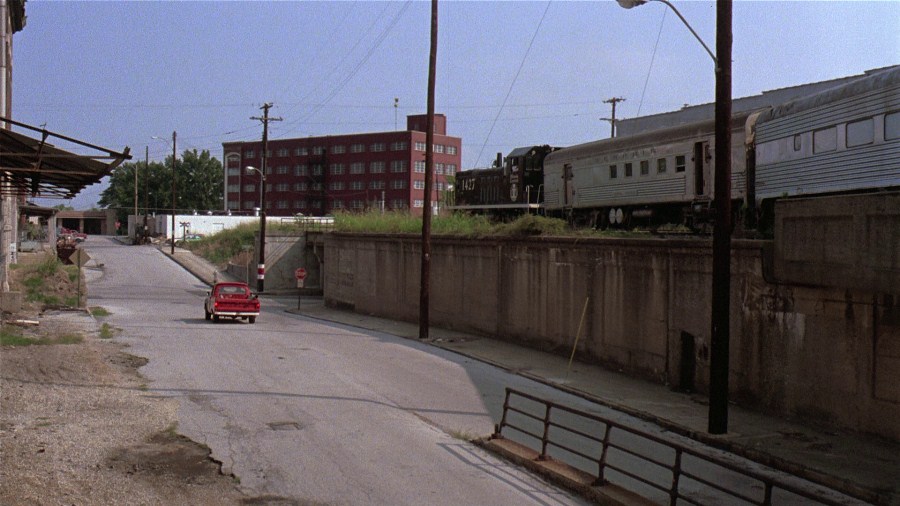 The lossless mono track offers quite a bit of range and oomph, a bit of a surprise for a small indie film made over 20 years ago. Dialogue is clear and sharp, but it’s the music that most impresses, with excellent fidelity and crystal clarity. It sounds very striking, has no damage present, and never comes off hollow or distorted.

Criterion disappoints a little in this area of the release, with a small selection of supplements that don’t even make the 2-hour mark, but they’re at least strong.

Repeating a similar feature found on Criterion’s DVD for Jarmusch’s Night on Earth, we yet again get a Q & A with Jim, where the director responds to a number of questions sent in. After an introduction that involves going over newspaper headlines for the day, mentioning the earthquake in Haiti and then jumping to an article on Avatar, he moves on to the questions. My intent was to actually list names and the questions being asked, but Jarmusch butchers so many of the names I just couldn’t do it (and this is no criticism against Jarmusch since I’d probably butcher them, too, one of the key reasons I’m not going to list them.) At any rate some of the questions asked involve casting, where he stands on “Perkins vs. Presley”, which Elvis (Army, fat, young, Vegas, etc.) is his favourite, the soundtrack, certain members of the cast, whether Tom Waits (whose voice appears as a DJ on the radio) is reprising his character from Down By Law, filming in Sun Studio, Screamin’ Jay Hawkins, and many other areas of the film. But he’s not just limited to this film, even taking questions for other films, or general questions like one about his film viewing habits (whether he researches them or not before viewing or whether he actually watches supplements on a DVD.) Some questions he answers briefly, and other he answers with great detail. He also takes on some humourous ones, like a question where he’s asked if he can introduce the writer to Winona Ryder, and he also takes a slight swipe at the MGM DVD’s subtitles. This is in place of a commentary track (which Jarmusch has no interest in doing) and it’s actually a great idea, and quite a bit of fun, more fun than a commentary at least. Though it might not cover Mystery Train in as great as depth as some may like, it’s still an informative and entertaining feature. In total it runs about 70-minutes and is divided into 35 chapters.

For the next feature we unfortunately only get an 18-minute excerpt from Scremin’ Jay Hawkins: I Put a Spell on Me, a 2001 documentary about the performer. The excerpt included focuses on the relationship between Hawkins and Jarmusch, which began when he was working to get the rights for I Put a Spell on You, which he played in Stranger Than Paradise (repeating what he says in the Q&A section of the disc.) The two also talk a bit about his performance in Mystery Train, the red suit, and the number of plums Hawkins had to eat over multiple takes, plus a funny anecdote about Hawkins wondering if he should take Henry, a cigarette smoking toy skull he used when he performed, with him while shooting. There’s also some great footage of Hawkins performing mixed in here, and Hawkins also recalls meeting Elvis Presley very early in the singer’s career. It’s actually a fantastic segment and it’s quite unfortunate and disappointing Criterion couldn’t or wouldn’t include more of it here. And though presented in 1080i, it looks like the source is actually video in a lot of cases, so the video looks a little rough.

Memphis Tour is an exclusive 17-minute documentary made by Criterion that revisits the area of Memphis where the film was shot. The doc revisits some of the locations, including the diner and Sun Studio (the hotel was torn down, apparently uninhabitable and dangerous even during filming.) It even visits other areas of Memphis not used in the film. Various people involved in some way with the production give little history lessons about Memphis (about Memphis’ economic woes, Martin Luther King’s assassination, Sun Studio, and Stax Records) and even share some memories from the shoot (like hitting the prostitution business financially during the shoot.) Included as interviewees are production assistant Sherman Willmott, Novella Smith Arnold, who handled casting in Memphis, and then D’Army Bailey and Marvell Thomas, who both played pool players in the bar in the last part of the film (Marvell is also the son of Rufus Thomas, who has a cameo in the film.) It was interesting to see the locations from the film now, looking as though they’ve been cleaned up significantly, and I especially enjoyed the more historical aspects of the doc. It was also nice to have a documentary from Criterion that is more than a talking-heads piece. This supplement is presented in 1080p.

The remaining supplements are photos, including a collection of Polaroids taken during the shoot, including some by Cinque Lee. The photo gallery then includes a number of photos taken during filming that were then used in a photo book that accompanies the film’s release, beginning with a text introduction by Jarmusch taken from the book. It’s a good sized gallery, which includes photos of a good chunk of the cast and crew posing. There’s even a photo answering the question whether Hawkins eventually did decide on taking Henry with him.

Dennis Lim has written an essay on the film, included in this releases booklet. Also in the booklet is a piece by Peter Guralnick, who talks a bit about the film, but more about the music presented in it. It’s a short booklet but an excellent read.

In all the material is at least good, great in fact and it’s all worth going through, but value-wise it leaves a little to be desired. At the higher price point (as is the simultaneous DVD release) I guess I would have expected more.

The supplements are great but it still feels slim. Past that, though, Criterion just hits it out of the park in the video and audio department; the high-definition transfer on here looks incredible, almost flawless, and for that alone it’s worth picking up their new Blu-ray for this incredibly fun and cool film. 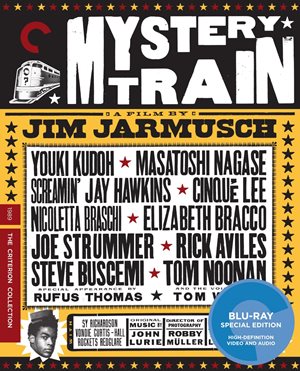