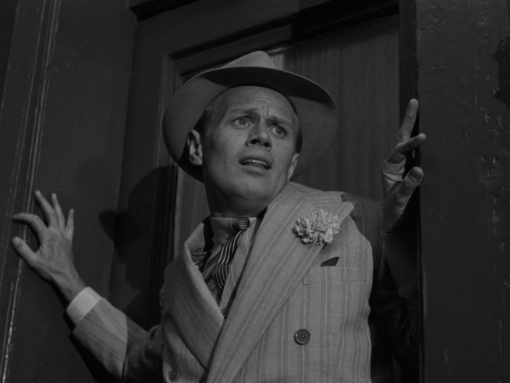 Two-bit hustler Harry Fabian (Richard Widmark) longs for “a life of ease and plenty.” Trailed by an inglorious history of go-nowhere schemes, he tries to hatch a lucrative plan with a famous wrestler. But there is no easy money in this underworld of shifting alliances, bottomless graft, and pummeled flesh—and Fabian soon learns the horrible price of his ambition. Luminously shot in the streets of London while Hollywood blacklisters back home were closing in on director Jules Dassin, Night and the City, also starring Gene Tierney, is film noir of the first order, and one of Dassin’s crowning achievements.

Jules Dassin’s classic noir Night and the City receives a new Blu-ray upgrade featuring a new 1080p/24hz high-definition presentation created from a new 4K restoration. Like the original DVD the film is presented again in its original aspect ratio of about 1.33:1 on a dual-layer disc. The restoration was done from a new scan of the original 35mm camera negative.

For the time Criterion’s DVD was fine but it’s clearly blown away by this new transfer. So much crisper, so much smoother and natural in motion, so much cleaner, and far more filmic, the film looks absolutely fabulous. With a noticeable improvement in definition the image now delivers the fine subtle details far better, best noticed in some of the suits that Fabian (Richard Widmark) wears: the pin-striping and cross-hatching is vastly more distinguishable here. The fine grain structure is there, noticeable but unobtrusive and natural, and the clean-up job looks to be more systematic and nothing glaring sticks out. Contrast and black levels look terrific, gray levels smoothly transitioning from light to dark, and blacks are inky, crushing never a worry.

Altogether I’m very impressed. I had been happy with the DVD all these years but there is a night and day difference here: the Blu-ray offers a far more natural and filmic look and is the best I’ve yet seen the film on home video. 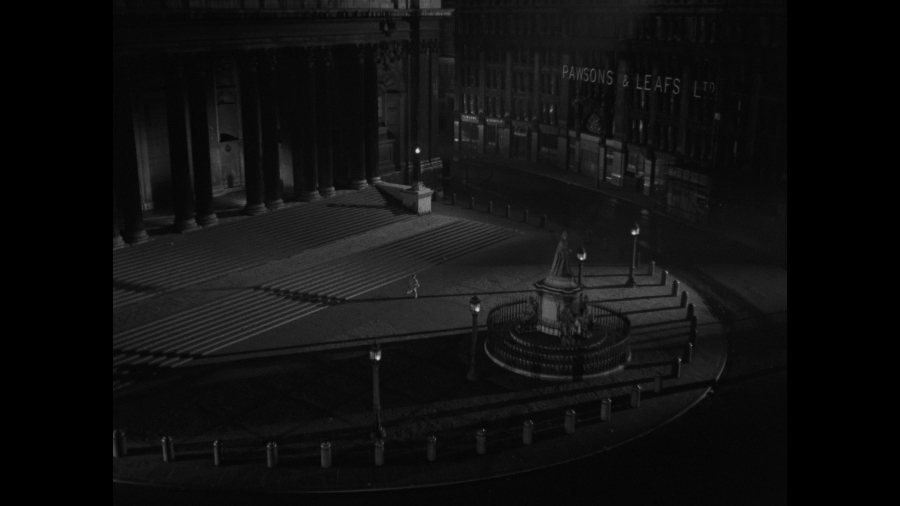 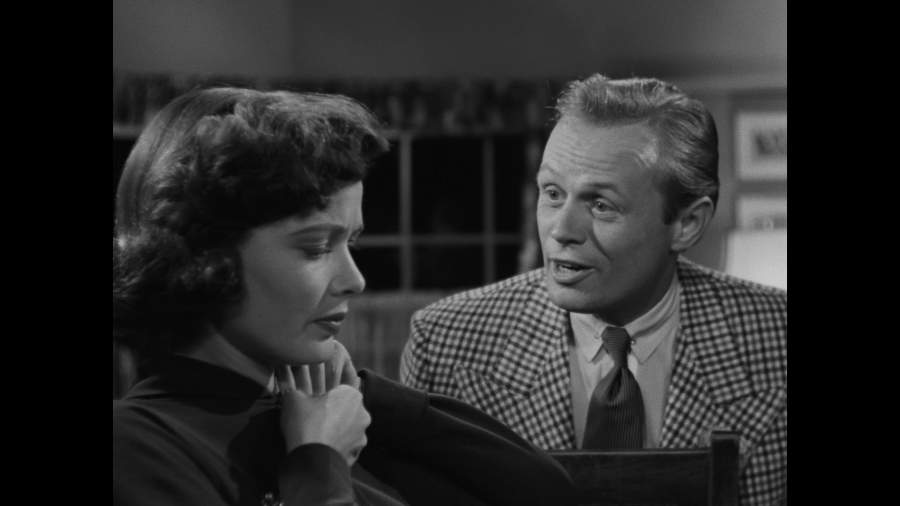 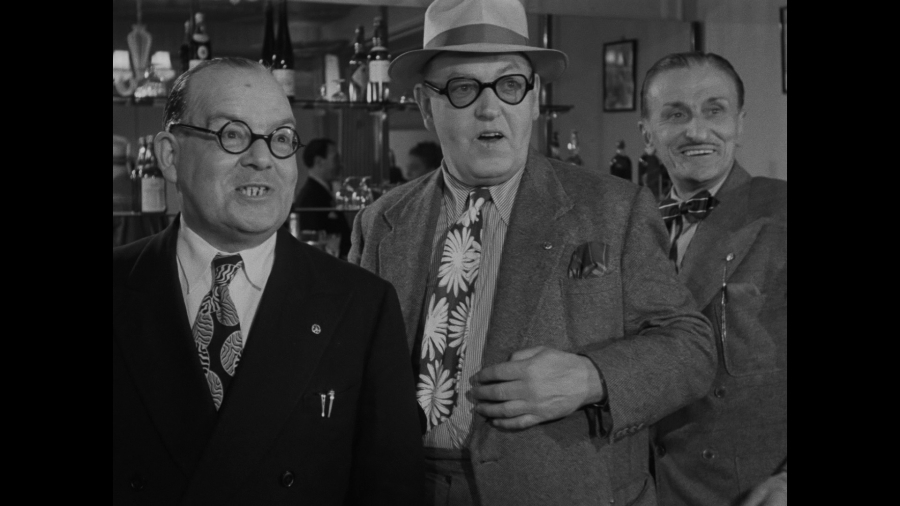 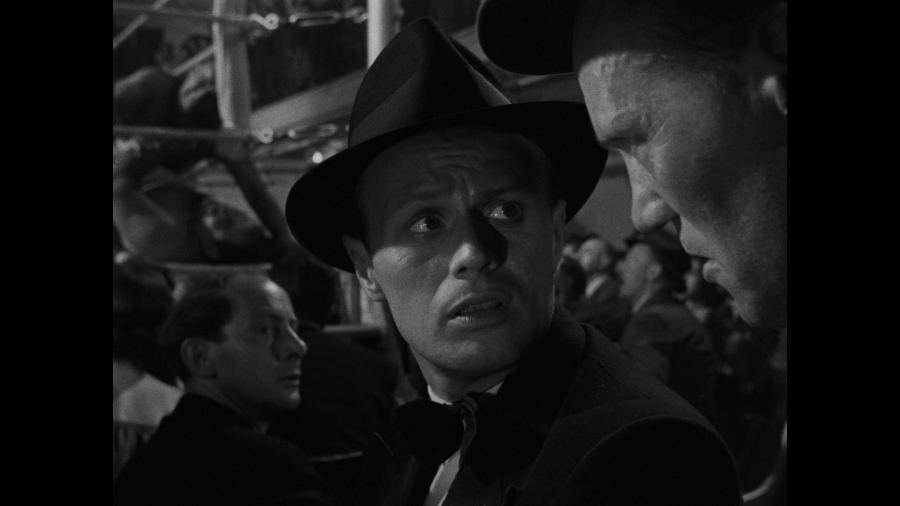 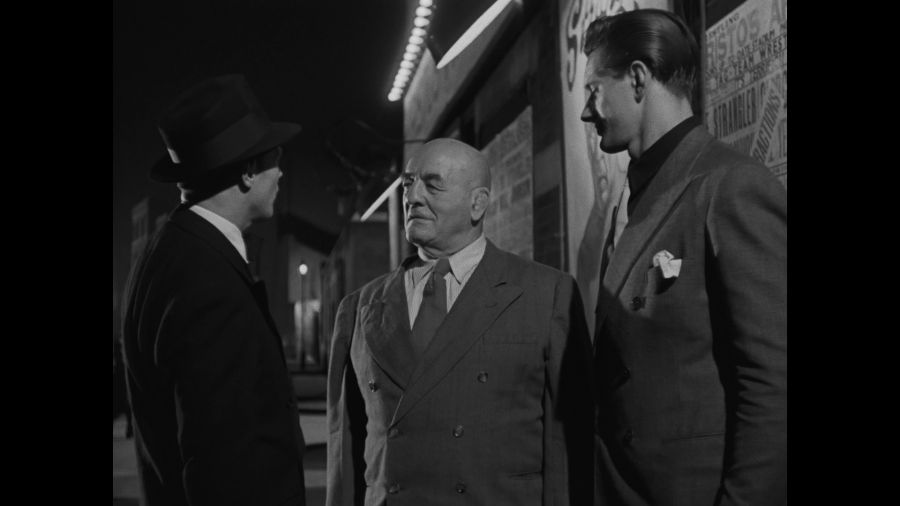 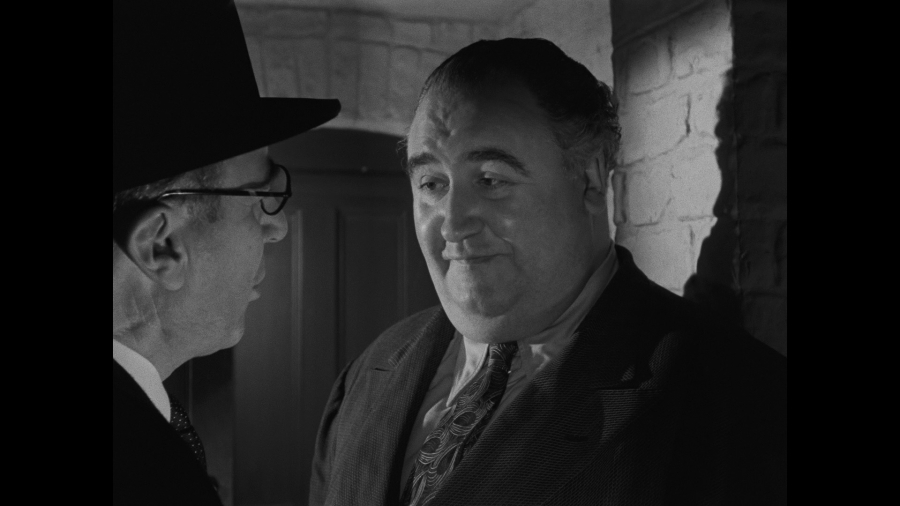 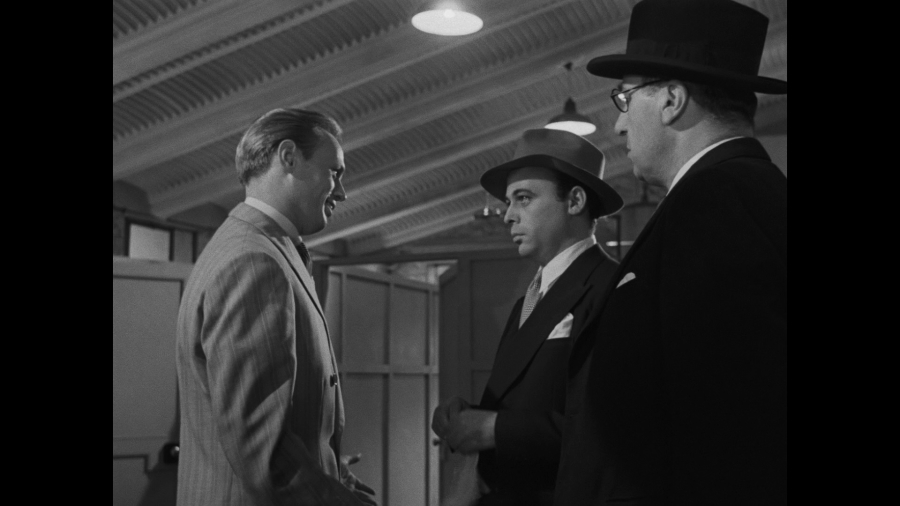 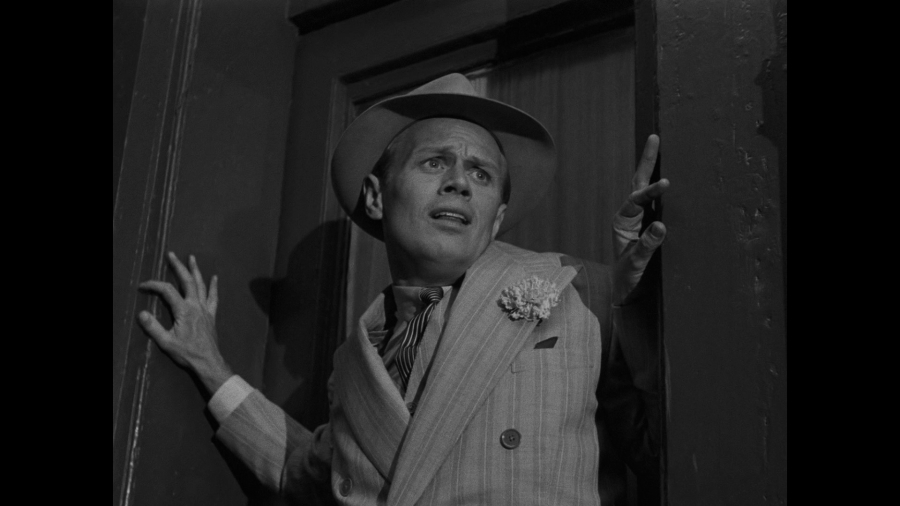 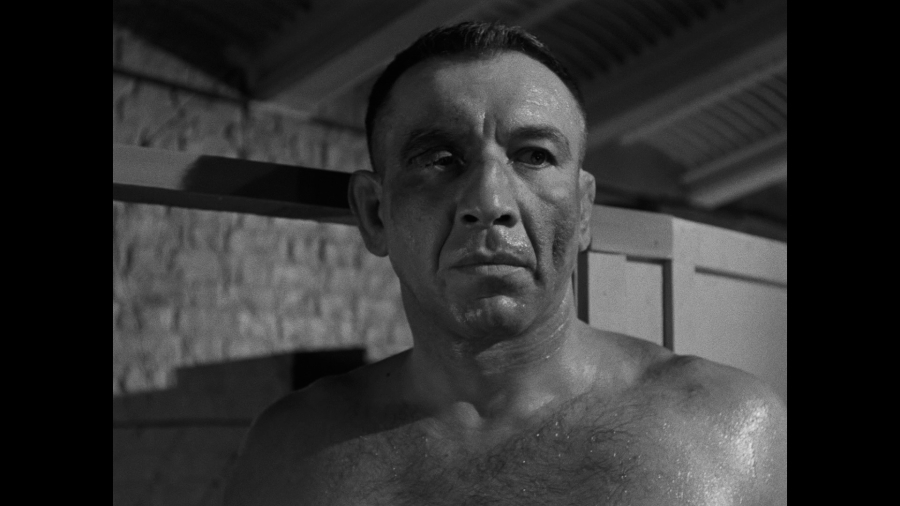 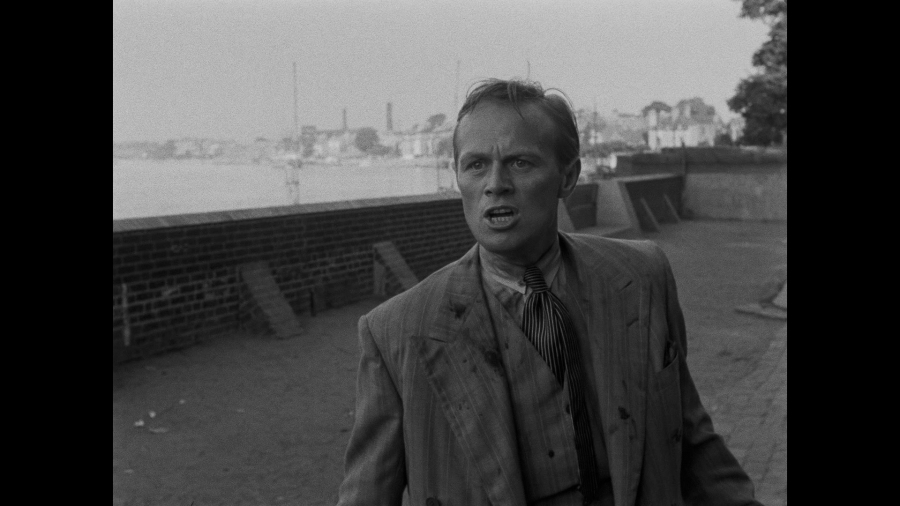 Even if age limits it a bit, the lossless linear 1.0 mono track still impresses. Clean with no noticeable noise or distortion, the track is nicely mixed with excellent volume levels and obvious range. Dialogue is clean and sounds fairly natural, though the music can sound slightly edgy when it tries to go for the higher moments, and sound effects on come off hollow on occasion. But this sounds more to be an issue with the materials and I think Criterion has still done a great clean-up job and restoration.

The supplements are mostly the same between this edition and the old DVD from Criterion, but Criterion does offer one rather huge addition: the original British cut of the film. A bit longer at 101-minutes this cut shares the same story but has some subtle differences. For starters it seems to make Fabian slightly more sympathetic, switching out the original opening with Widmark and Tierney (where Widmark’s character is trying to steal money from Tierney) with a completely different sequence where it looks as though Tierney is being the difficult one and Widmark the victim of everyone just holding him down.

There are some other additions and omissions spread throughout, including more scenes with some minor characters, and some quick additions, of which I probably wouldn’t have noticed without other features on the disc telling me, but the biggest one is that this version features an entirely different score. Carried over from the old DVD and presented as an accompaniment to the British version is Two Versions, Two Scores, a 24-minute visual essay by music scholar Christopher Husted. This fascinating feature explains why there are two versions most importantly of all, and even points out the differences between the two versions. But he gets into more detail about the two very different scores created by two different composers and how they change the film, and even looks at cases where a scene might feature a score in one version but not in the other. As before it’s an excellent feature but improved upon now that we get the full British version.

And the biggest surprise for the British version: it’s actually presented in 1080p/24hz high-defintion and it looks pretty great itself, despite the file size being smaller. The restoration work isn’t as thorough but it’s still quite impressive itself. I would have expected a standard-def upscale (like the alternate versions found in the Tati set released last fall by Criterion) but Criterion didn’t go that route thankfully. The only quibble I may have is that it comes with a Dolby Digital mono track, but it still sounds fairly good.

The rest of the features have all been ported over from the DVD as well, starting with an audio commentary by film scholar Glenn Erickson. Erickson gives a fairly thorough history to the film’s production, from Dassin’s blacklisting to the two alternate versions that came about from what was filmed, while offering observations about the film’s look and style, the film’s locations, Zanuck’s “input” into the film, comparisons to the original novel (which is very different, though in another feature we learn this is probably because Dassin never actually read the book), and how Tierney came to be involved. He does make comparisons to the British version and also talks about many sequences excised from the original script. Despite the fact Erickson is obviously reading from notes and sounds like he’s faking enthusiasm in places it’s an excellent commentary track.

We also get Criterion’s 2004 interview with director Jules Dassin. He expands on what Erickson mentions about the inception of the production, explaining that Zanuck needed to get him out of the country because of the Black List, giving the novel to him to film (this is where Dassin admits he never read it) in England, Dassin also mentioning all of the trouble Zanuck had to go through to keep him working under the noses of studio heads who wanted nothing to do with black listed people. He also talks a little more about why Tierney was brought on, which involved Zanuck trying to help her deal with some personal issues. He talks about working with the actors and the actual filming, though sadly he wasn’t able to be involved in editing, again because of that Black List. Dassin does talk about the new found interest in what the French called “film noir” that happened years later, though still seems a bit bewildered by it. He was also bewildered by comments from French critics who said he was indebted to John Huston’s Asphalt Jungle, which he had actually never seen before making the film. At 18-minutes it’s an absolutely wonderful and very forthcoming interview, Dassin giving a nice overview of the film while also giving his own perspective on the issues the Black List caused.

Criterion next includes excerpts from an archival interview with the director, filmed in 1970 for an episode of the French television program L’invite du dimanche. At 14-minutes it features Dassin talking about the old Hollywood studio system and what was really an assembly line like system, though he says excellent films came out of it despite the system. He also gives an idea about the role of the director, who were pretty much expendable, as best displayed in a great anecdote he shares about David O. Selznick. From here he then talks a little about his work and then gets into details about the Black List and the McCarthy hearings, even defending Elia Kazan, though cuts that portion of the interview off when he states he doesn’t like talking about it. Though it has little on Night and the City itself it gives a great bit of background on the director and offers a firsthand account of working in the early studio system.

The disc then closes with the film’s theatrical trailer. The “road map” format insert features artwork on one side (so you could use it as a poster I guess) and then the same essay (presented as a newspaper article to fit the large fold out format) on the film by scholar Paul Arthur, examining the characters, themes, and look of the film. Doing a comparison it looks to be exactly the same as the one found with the DVD.

Featuring a wonderful new presentation for the American version, the complete British version (also featuring a strong transfer itself), and all of the features from the original DVD, Criterion’s edition of the film is strong release, and one I easily recommend, even to those that own the previous DVD edition. 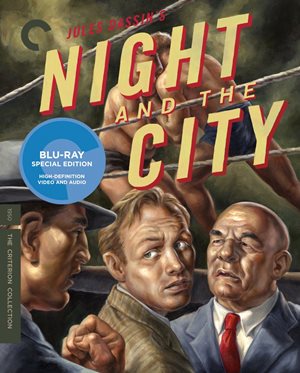