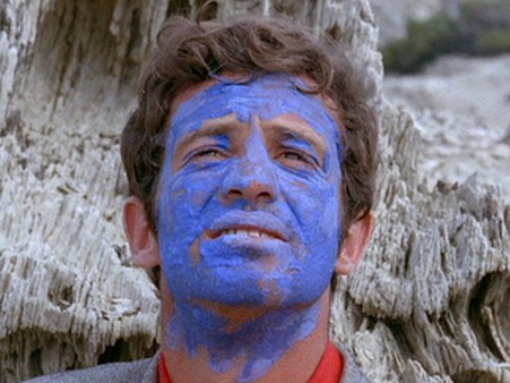 Dissatisfied in marriage and life, Ferdinand (Jean-Paul Belmondo) takes to the road with the babysitter, his ex-lover Marianne Renoir (Anna Karina), and leaves the bourgeoisie behind. Yet this is no normal road trip: genius auteur Jean-Luc Godard’s tenth feature in six years is a stylish mash-up of consumerist satire, politics, and comic-book aesthetics, as well as a violent, zigzag tale of, as Godard called them, “the last romantic couple.” With blissful color imagery by cinematographer Raoul Coutard and Belmondo and Karina at their most animated, Pierrot le fou is one of the high points of the French New Wave, and was Godard’s last frolic before he moved ever further into radical cinema.

The Criterion Collection presents Jean-Luc Godard’s Pierrot le fou in its original aspect ratio of 2.35:1 on the first dual-layer disc of this two-disc set. The image has been enhanced for widescreen televisions.

I had seen the film previously on a nasty Fox Lorber disc which I recall being a little jittery and mushy. I don’t have that disc for a direct comparison but my memory of it is that it wasn’t at all good while the Criterion edition has exceeded any expectations I had; it looks gorgeous. I’d have to rank it up there with one of Criterion’s more recent Godard releases, Made in U.S.A., which has one of the most striking DVD transfers I’ve come across lately. The image is crisp with excellent detail, colour saturation is perfect, all of the film’s primary colours are striking, and blacks look deep. There is some slight edge-enhancement and the red in the opening credit text looks a little blocky but otherwise the digital transfer is pretty much flawless.

The print is also near-perfect, only a stray hair appearing at the frame edge on occasion. In all it looks absolutely wonderful, one of Criterion’s most impressive video transfers. 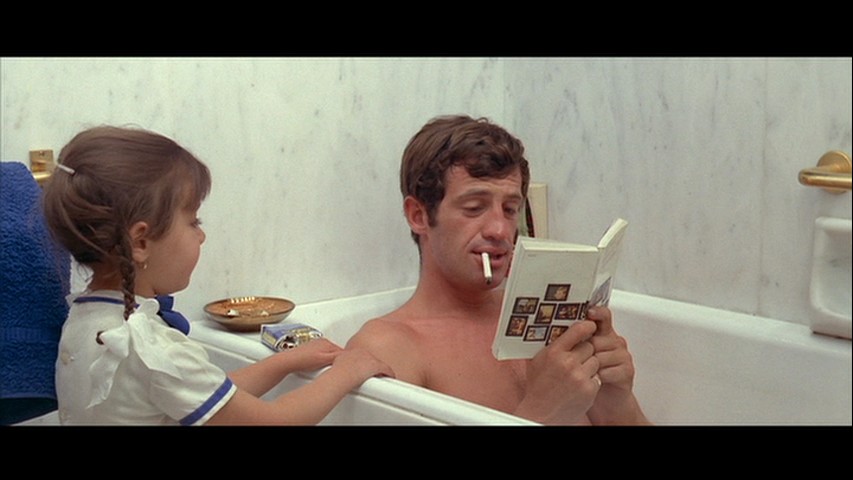 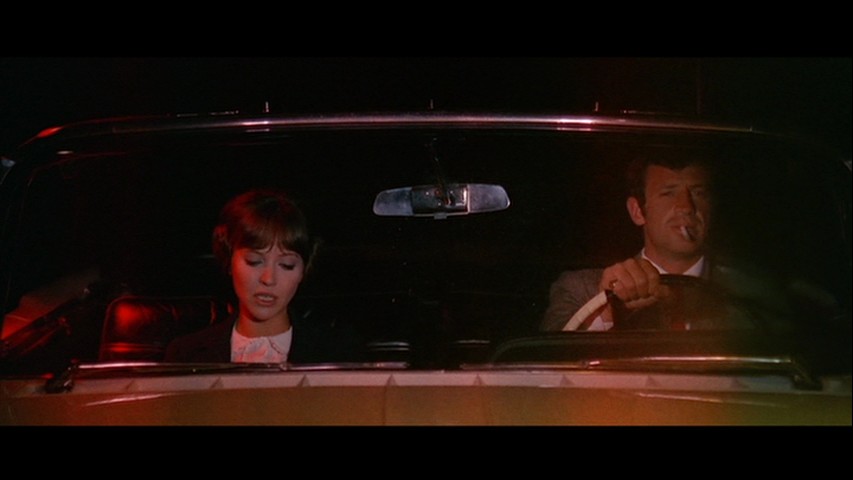 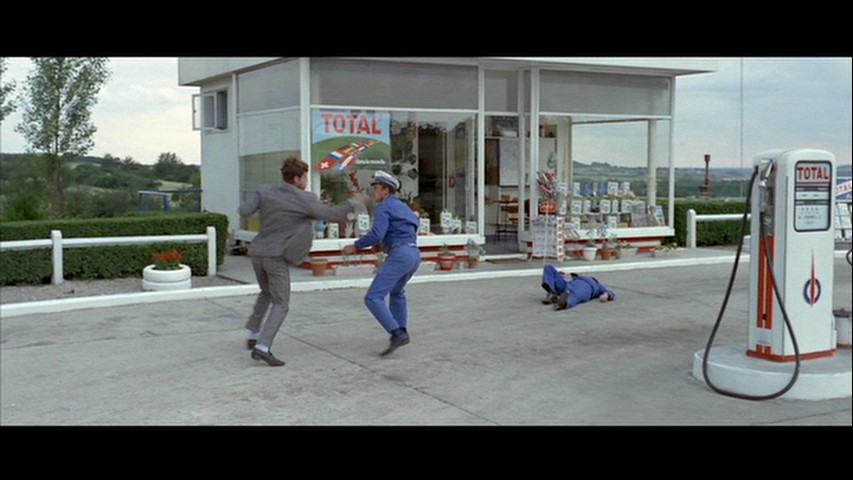 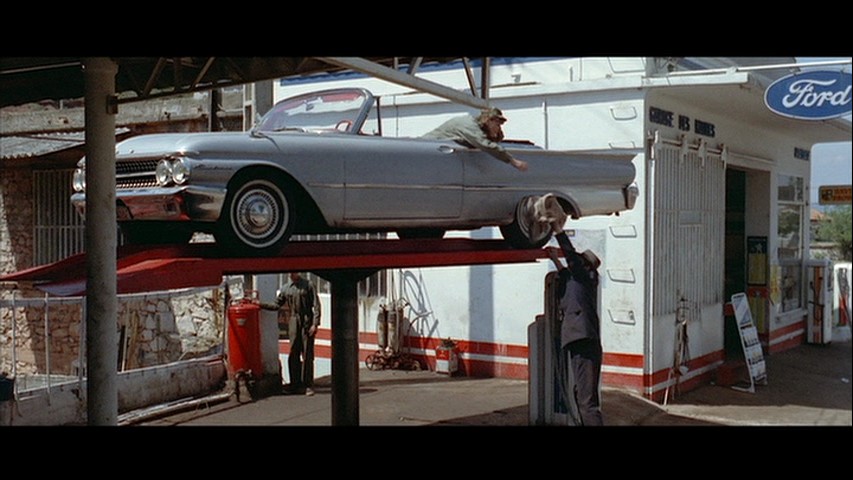 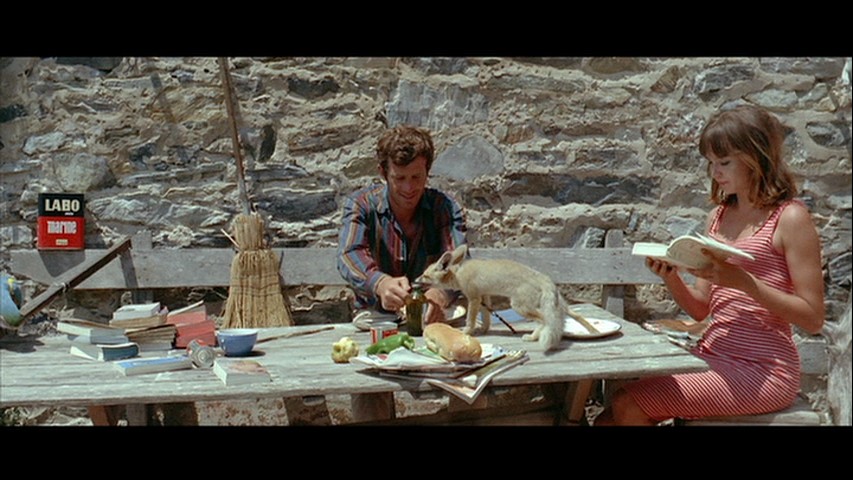 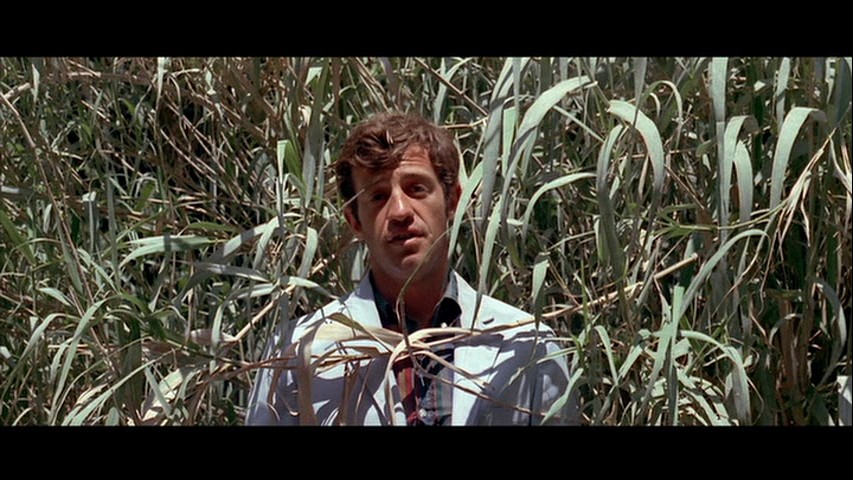 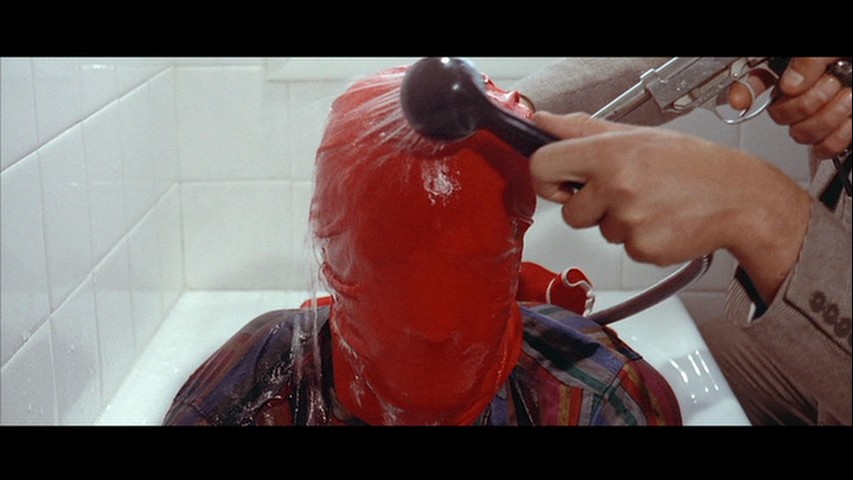 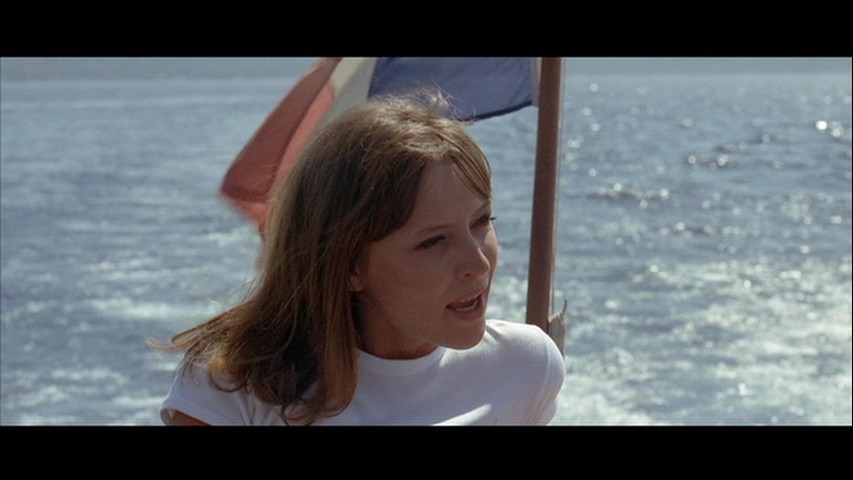 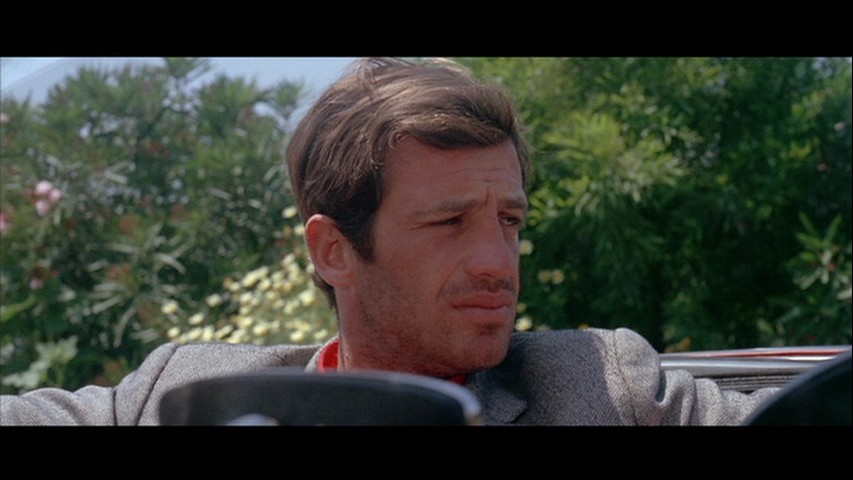 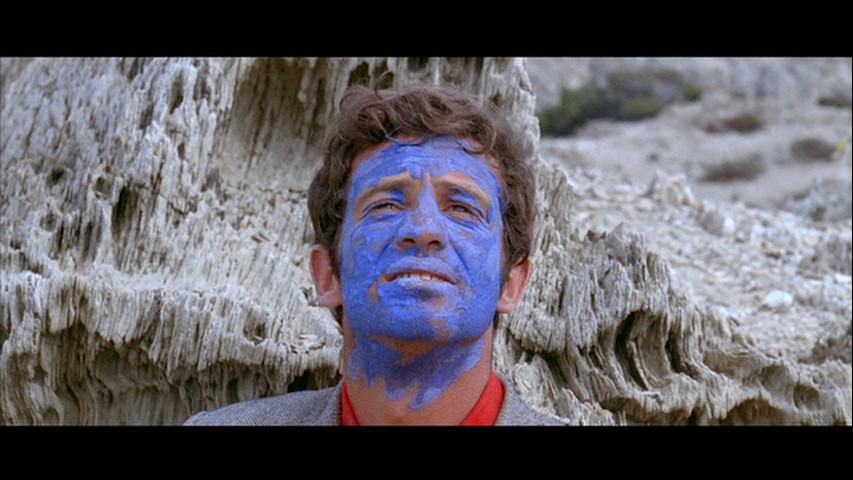 The French 1.0 mono track is fine enough and about what I expected. It’s clean and free of noise, and dialogue is intelligible if a little flat. Music is loud but sounds a little harsh when it reaches its highs.

Criterion has devoted the entire first disc to the film while the supplements are all found on the second dual-layer disc, which is sort of overkill since there is less than two hours worth of material on here.

First up is a 15-minute interview with Anna Karina. In English she talks quickly about her various roles in Godard’s films and then concentrates specifically on Pierrot le fou, her character Marianne, her working relationship with Godard on the film, and then anecdotes from the set, one of which involves Godard frustrated at the fact she couldn’t knock the pins down in the bowling scene close to the end of the film. She then gets a little into the film’s reception. I like her interviews and this is another excellent one. I guess I’m always a little thrown that she speaks so fondly of Godard in her interviews since every other interview I’ve heard that mention the man present a man the individuals respect but who is, well, difficult, to put it nicely. But then I’m sure she knew him better than everyone else.

A Pierrot Primer is a sort of audio commentary/video essay featuring future Godard collaborator Jean-Pierre Gorin, who talks about the film and how it fits into Godard’s body of work. It runs almost 36-minutes but only covers the first 14-15 minutes of the film as the feature constantly pauses the film or repeats certain sections. Covering the narrative set-up, various quotes, and even breaking down the opening credits it’s an interesting feature though I think I would have appreciated a full commentary more. Plus I must admit that personally I’ve always had trouble with Gorin’s English and subtitles would have been of help.

Belmondo in the Wind is a short 9-minute interview piece with Belmondo primarily, taken while Pierrot le fou was being filmed, getting the first interview with the man after he’s just dodged a train. He talks primarily of his acting technique, not buying into the art of “method” acting, and he even talks about his wife and the jealousy that can occur when he has to share certain scenes with lovely actresses. Godard and Karina also pop up to talk about him, Karina giving an “uh… thanks?” sort of compliment to Belmondo by saying he “isn’t gorgeous, but not bad.” Short but worth the viewing, if also for some of the behind-the-scenes material present.

More interview footage is found under Venice Film Festival, 1965, running about 4-minutes. Here you’ll find brief material with Godard and Karina, recorded separately. It’s actually fairly fluffy and not all that insightful with the two just talking briefly about the material presented in the film.

The big feature on here is the 53-minute documentary Godard, l’amour, la poésie which covers the working relationship between Godard and Karina. I was actually looking forward to this documentary but must admit I was a little disappointed in it. The film quickly covers Godard’s early career and then moves on to his film work starting with Breathless. The documentary then steps through the films he did with Karina, touching on where their relationship was with each film, including Contempt, in which Karina does not appear. It then concludes with Pierrot le fou, though doesn’t touch on Made in U.S.A.. It’s an okay documentary but it didn’t really offer anything new. People completely unfamiliar with Godard and Karina’s working relationship would probably get more out of it. The only thing I really found nice about the documentary were archival audio interviews with Karina who talks about her relationship with Godard.

The supplements then conclude with a theatrical trailer.

The best part about this release is the booklet, which contains an excellent analytical essay on the film by Richard Brody, Andrew Sarris’ original 1969 review for the film, which is an excellent read, and a reprinting of a great interview with Godard, that takes up most of the 43-page booklet. Easily the best part of this release.

They’re a decent batch of supplements but not great in terms of quality. The booklet was easily my favourite aspect of the DVD, followed probably by the Karina and Belmondo interviews.

The supplements are okay, but the DVD’s real selling point is the transfer, a sharp improvement over the previous Fox Lorber DVD. On that basis alone this edition comes with a high recommendation. 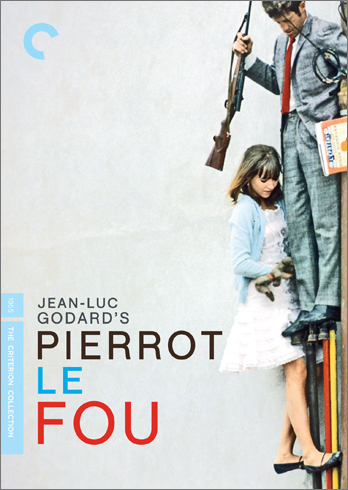