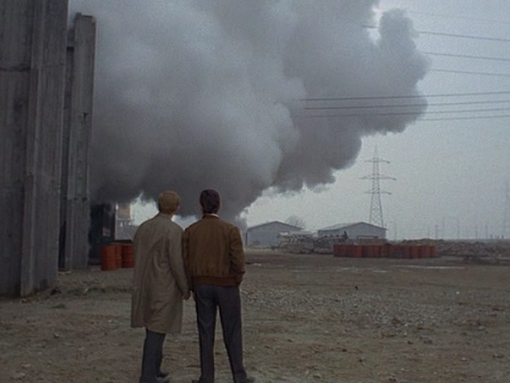 Michelangelo Antonioni’s 1960s panoramas of contemporary alienation were decade-defining artistic events, and Red Desert, his first color film, is perhaps his most epochal. This provocative look at the spiritual desolation of the technological age—about a disaffected woman, brilliantly portrayed by Antonioni muse Monica Vitti, wandering through a bleak industrial landscape beset by power plants and environmental toxins, and tentatively flirting with her husband’s coworker, played by Richard Harris—continues to keep viewers spellbound. With one startling, painterly composition after another—of abandoned fishing cottages, electrical towers, looming docked ships—Red Desert creates a nearly apocalyptic image of its time, and confirms Antonioni as cinema’s preeminent poet of the modern age.

The Criterion Collection presents Michelangelo Antonioni’s Red Desert in its original aspect ratio of 1.85:1 on this dual-layer disc. The image has been enhanced for widescreen televisions.

The standard definition transfer found here isn’t bad but I found it fairly erratic. The opening is very problematic, filled with edge halos and a lot of noise, possibly an issue with the transfer having trouble rendering the film’s grain. Screen grabs don’t really capture it but in motion it’s noticeable. The transfer then looks a little better after the opening but then on and off throughout the transfer can become a little soft, splotchy, and still contains a fair amount of noticeable edge-enhancement. As a whole detail is so-so and it just never looks as sharp as it could. As noted elsewhere in the forums on this site and other film/DVD/Blu-ray sites and in the Blu-ray review here the colour scheme differs when compared to the BFI release, but I can’t say I had an issue with it and I thought the colour presentation was one of the stronger aspects of this edition.

The print is in excellent shape but has a few big blemishes, including a vertical yellow line that appears midway through and a black splotch during a final sequence, though the darkness of the sequence in question actually hides it so it’s barely noticeable.

When scoring I was stuck between a 6 and 7 but eventually settled on the former: I can’t say it’s terrible and there are moments where it’s strong, but there were enough issues that it left me fairly underwhelmed. 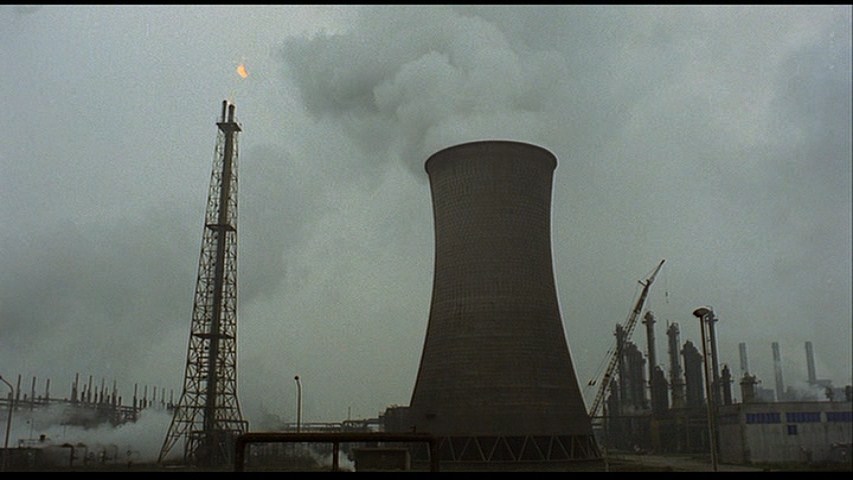 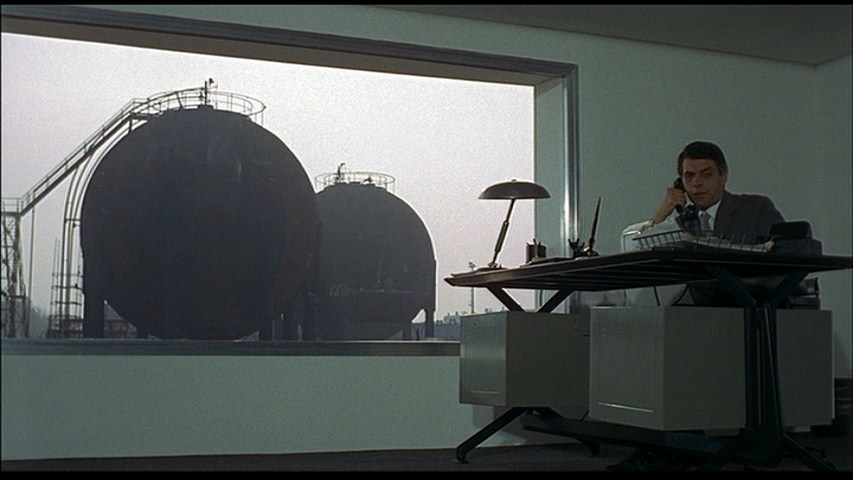 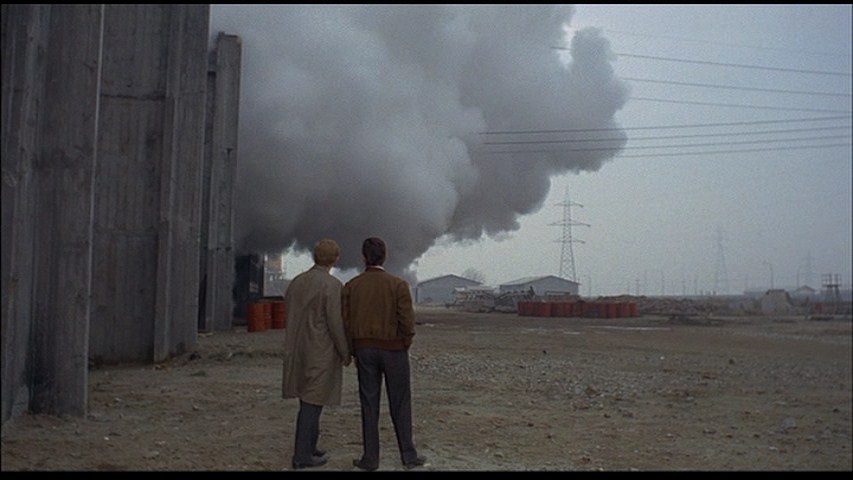 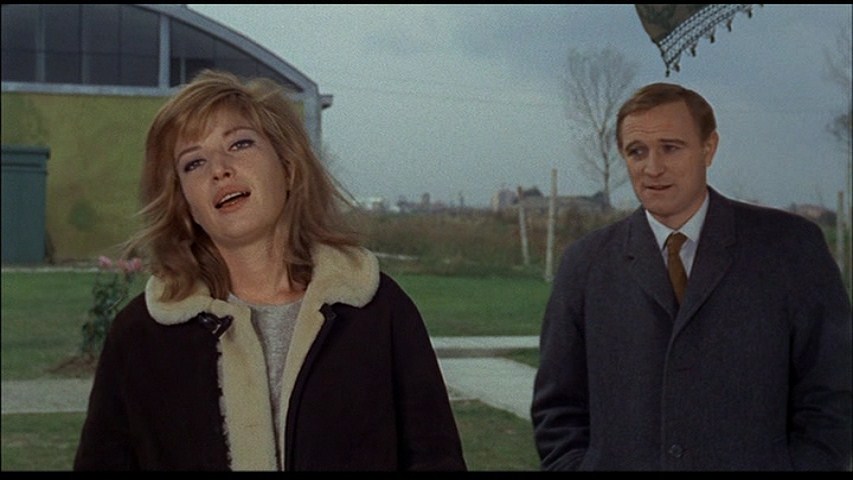 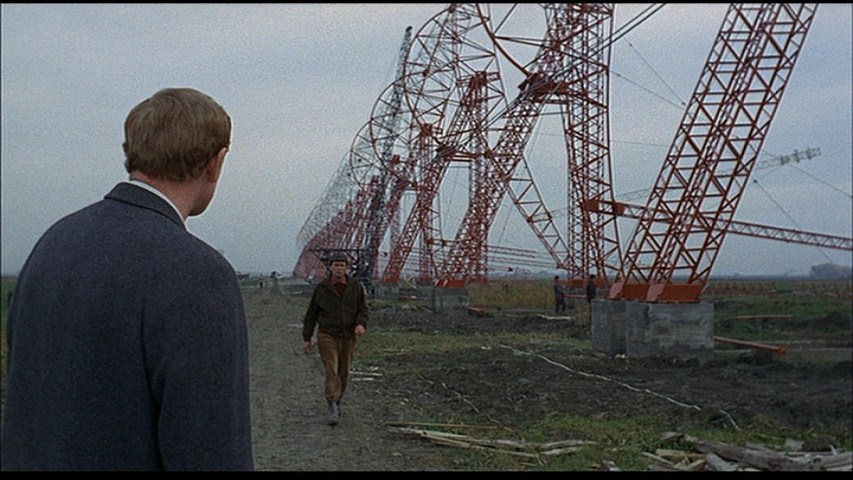 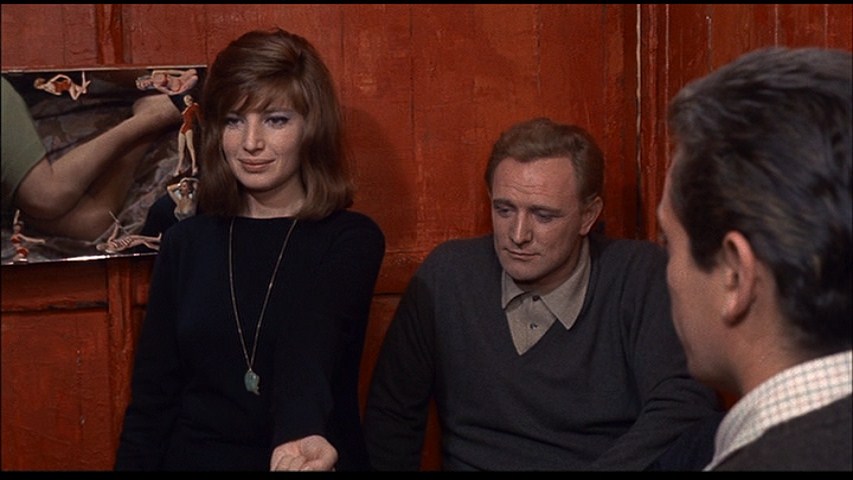 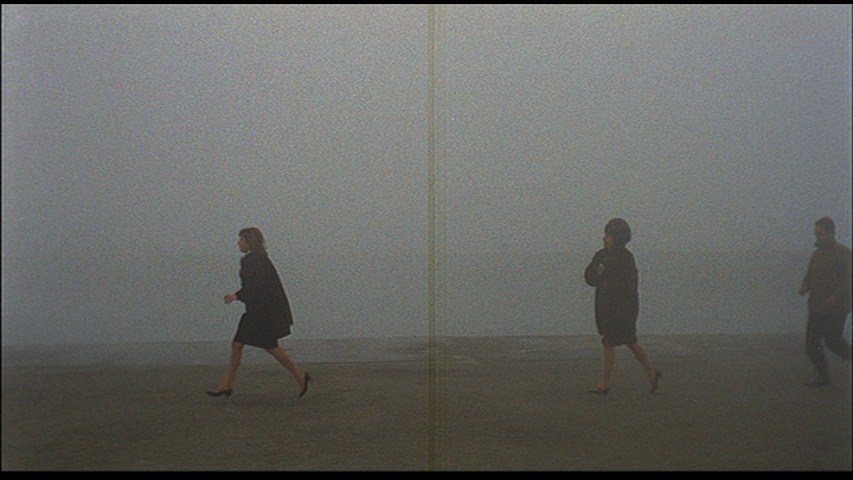 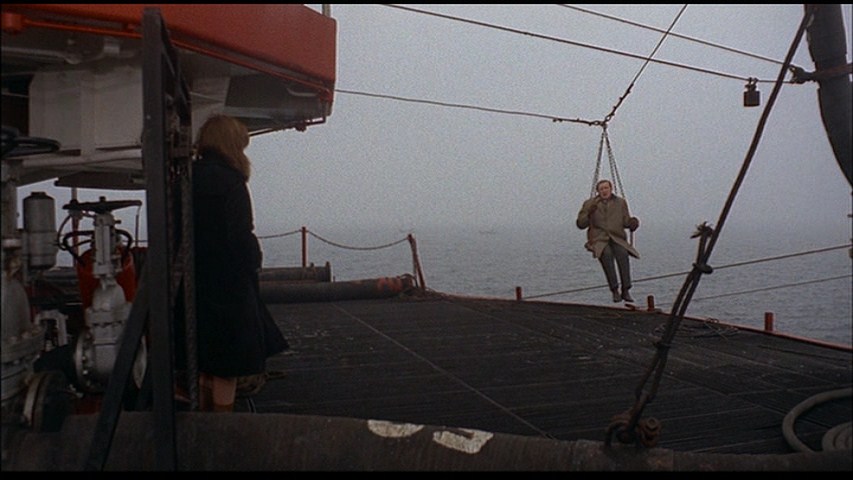 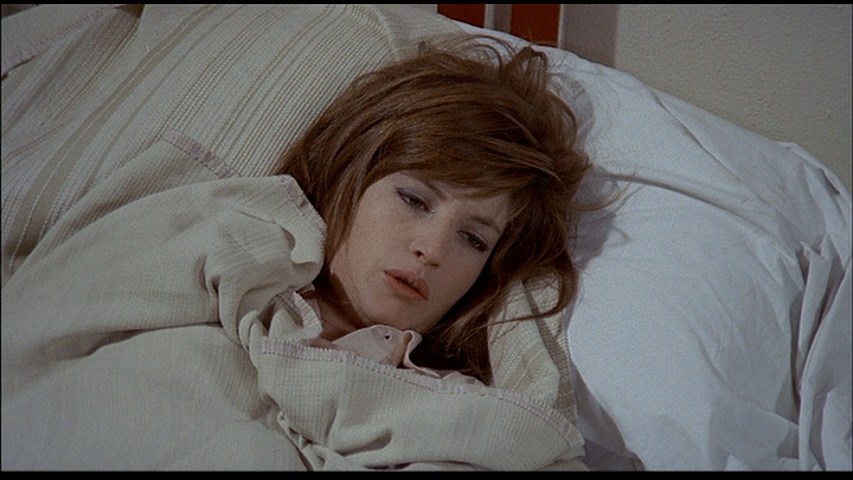 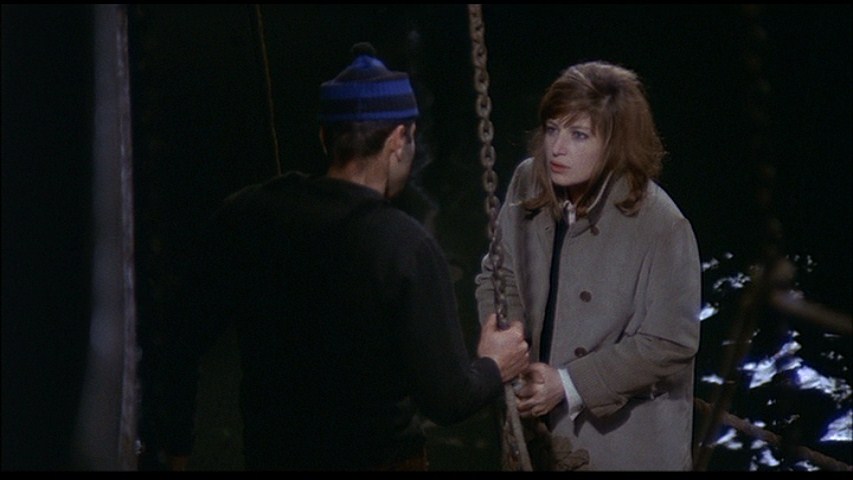 The Dolby Digital 1.0 mono track actually has some surprises. Dialogue sounds hollow, possibly because it was all looped over post-production (with Harris’s dubbing appearing the most obvious.) But the music and the sound effects that appear have an amazing amount of range and don’t come off altogether too harsh.

The DVD edition (and Blu-ray edition) comes with a few short, though intriguing supplements.

First Criterion has ported over the audio commentary that appeared on the BFI release, which features film scholar David Forgacs. It’s very scholarly and it can be dry, but it does manage to still offer a fascinating analysis of the film’s themes of alienation and adaptation, mixed in with anecdotes, and talk of the compositions and the film’s editing. He of course talks about Antonioni’s use of colour and how he would paint the setting to get the look he was going for, which included not only painting man made items but painting vegetation, including one shot where he painted trees a white, only to film the scene and have the trees turn out black, which led to the sequence being abandoned. He offers some historical context about the industrialization of Italy, including the health and environmental concerns that come with it, along with the unsafe working conditions. He also covers Antonioni’s work with Vitti and talks about some of her other work, but surprisingly doesn’t say much about Richard Harris, only briefly mentioning Harris’ annoyance with Antonioni, which led him to leaving the film. He does make some comments about the transfer as well, but since this was originally made for the BFI disc, it should be kept in mind he is referring to that one. In all it’s a worthy track, certainly worth listening to, offering an excellent look into at the film.

Moving to the supplements section we first get a 12-minute interview with Michelangelo Antonioni, recorded for the French television program Les écrans de la ville in 1964. In it he mentions how he came up with the idea and the themes he was trying to present in the film, specifically adapting to the modern world. He makes sure to mention he has nothing against the modern world, praising progress, and then he moves on to the use of colour, and states no painter has influenced him for this film. He also talks about Vitti, her roles in previous films (L’Avventura and L’Eclisse,) how he sees actors and even mentions the critical reception of his work. Short but good, though it covers a lot of material that’s already mentioned in the commentary track.

The following interview is one from 1990 with Monica Vitti. Running only 9-minutes and filmed for the French television program Cinéma cinémas, she briefly chats about first meeting and Antonioni and their work together, and then goes into great detail about L’Avventura and the grueling process that went into getting it made. It’s unfortunately brief and rushed (and I suspect edited down) but it’s at least wonderful getting an interview of any sort with the actress.

The next feature is an interesting one, a collection of Dailies presented in both black-and-white as well as colour, included to “show the precision of Antonioni’s framing and the direction of actors.” It runs 28-minutes, and 75% of it is material taken from the “Shack” sequence. It’s basically made of multiple takes and tests (I assume) all unedited with no cutting. Colour and B&W material is put together seamlessly in Criterion’s presentation. Seeing some of the sequences in black and white and then comparing them to the similar colour ones from the film makes for an intriguing activity, making one see just how important Antonioni’s use of colour in the film is, the lack of the reds being the most striking element. I’m also positive there’s a deleted bit in here, involving Vitti on the phone. I’ve seen the film a few times (having just revisited it on both the Blu-ray and this DVD) and I do not recall this scene in the film at all. The DVD presents the footage in widescreen but it’s non-anamorphic, window-boxed all around. The Blu-ray on the other hand has the image fill out the screen. Why this is the case is unknown to me but it’s a little disappointing since the quality of them on the Blu-ray were quite good. The dailies play with no audio and have been divided into 6 chapters.

Next are a couple of short films made by Antonioni in the 40’s. First is the 11-minute Gente dell po, which is a non-fiction short that follows a barge going down the Po river, Antonioni’s camera meeting the people that live along it as it passes. It’s a beautiful piece, and Antonioni’s compositions are rather striking. The presentation is fine but there are slight subtitle problems, where they display before any dialogue is spoken, similar to the Blu-ray. A bit annoying but not horrific.

The next short film is N.U., another short documentary by Antonioni, this one about sanitation department in Rome. This one has very little voice over narration and really just films the workers as they go through their daily routine. Again it’s a beautifully composed piece and a great inclusion. The presentation is fine enough but annoyingly the distribution company that owns the film, Cinecitta Luce, has their logo pasted in the top right corner.

The disc then closes with a rather bizarre 4-minute theatrical trailer. It begins with the film’s Golden Lion win, and then goes down an odd route. I can’t say I got any sort of “neurotic woman alienated by her industrialized surroundings” feel from the trailer, instead getting a “sex romp” sort of feel from it. Odd.

The release then concludes with rather thick booklet, first opening with an excellent analytical essay on the film by Mark Le Fanu, followed by one of the best inclusions in this edition, a reprint of an interview between Jean-Luc Godard and Antonioni, which focuses primarily on the use of colour in the film, that originally appeared in the November 1964 edition of Cahiers du cinema. The booklet then concludes with a couple of short notes about the short films included on the disc. Another fantastic booklet from Criterion.

In the end an excellent number of supplements, the short films being an incredibly nice addition.

The transfer wasn’t as strong as I would have hoped, but it’s still acceptable. Though it’s unfair to compare DVD and Blu-ray, Criterion’s DVDs can usualy hold their own up against their Blu-ray counterpart, but it does fall quite a bit short here. The supplements on the other hand are all quite strong and are all worth looking through. 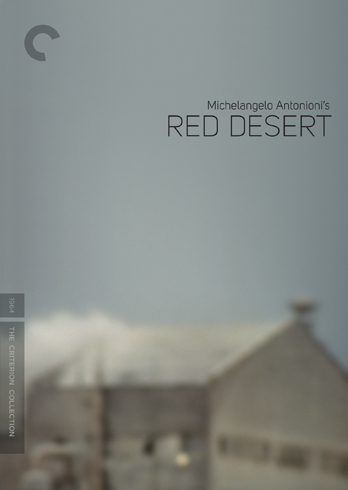