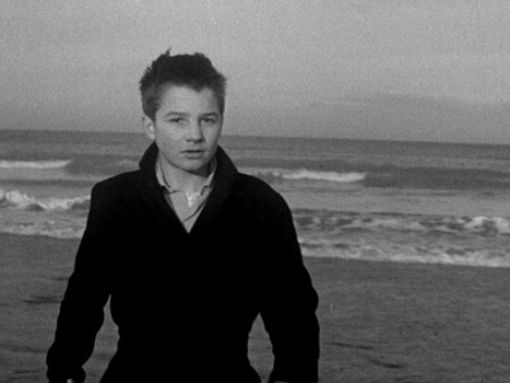 Criterion's Blu-ray edition of The 400 Blows presents the film in its original aspect ratio of 2.35:1 on this dual-layer disc. The transfer is in 1080p and has been enhanced for widescreen televisions.

Criterion has released this film on DVD four times, now. Their first DVD release was a non-anamorphic port of their laserdisc. That DVD was discontinued after Criterion lost the rights, finally regaining them years later and re-releasing the film on DVD (with a new anamorphic transfer) as part of their The Adventures of Antoine Doinel box set. The disc for The 400 Blows on that set also included the short film Antoine and Colette. They then released their remastered The 400 Blows as a single release out of the box set, and while it contained all of the supplements found on that disc in the set, it did not include Antoine and Colette. This new Blu-ray version is similar to that last DVD release, containing the same supplements but missing the short film again.

I was actually expecting a sort of port from the DVD release, just a little sharper, less artifacts, but it looks as though Criterion has yet again completely redone their transfer. The image is, to no surprise, much sharper, presenting far more detail than the previous DVD releases. Artifacts are non-existent, blacks and whites are fantastic, and gray levels are smooth.

The print, though, has even been more thoroughly cleaned. The original DVD was filled with damage, and Criterion's re-release did clean this up quite thoroughly, but they've gone the extra step here and it's virtually flawless. Grain is more noticeable than the DVD releases, which is fine by me, just showing off how sharp this transfer is.

I was expecting it to look good, but it still exceeded my expectations. Absolutely wonderful to look at. 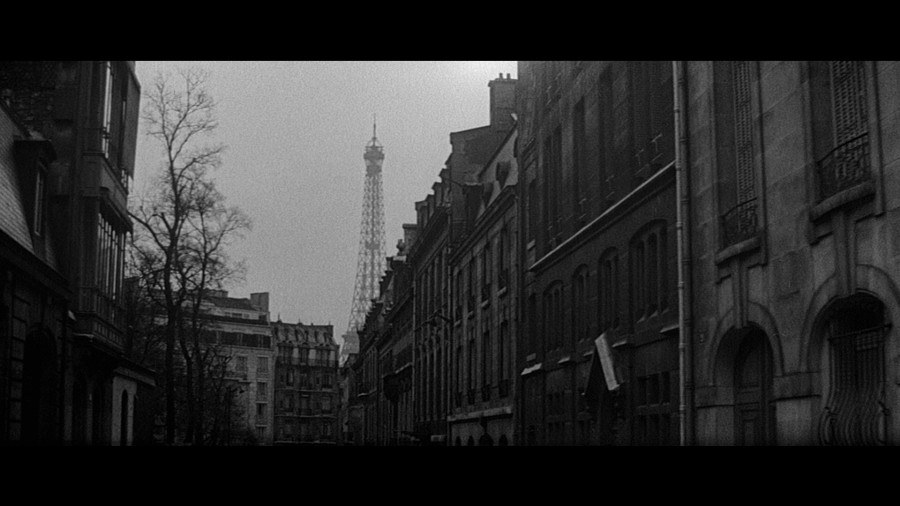 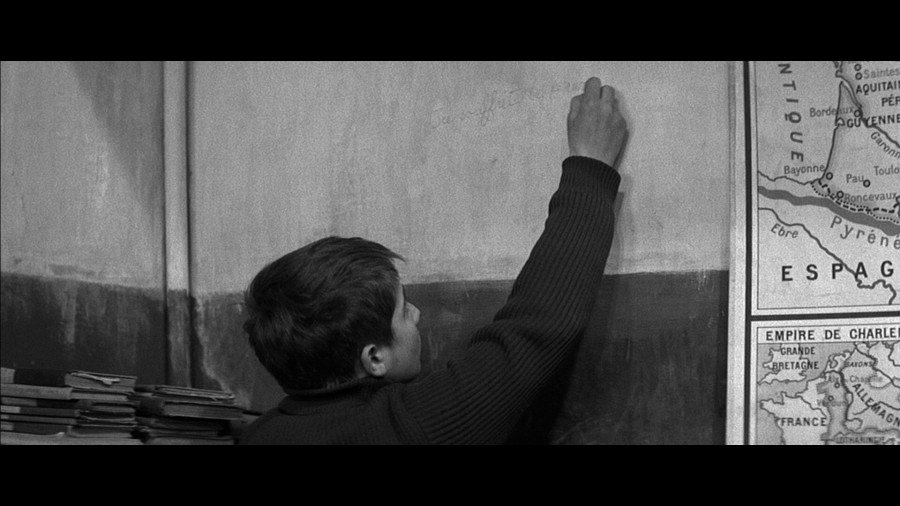 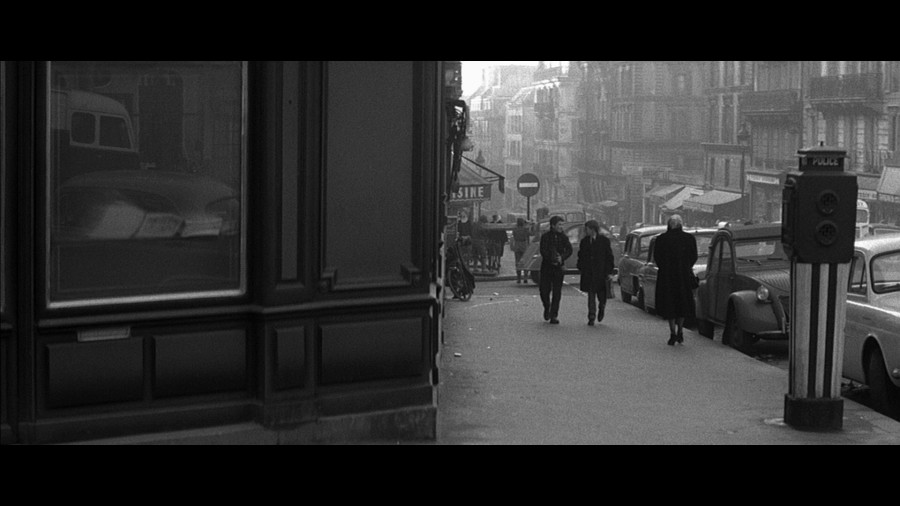 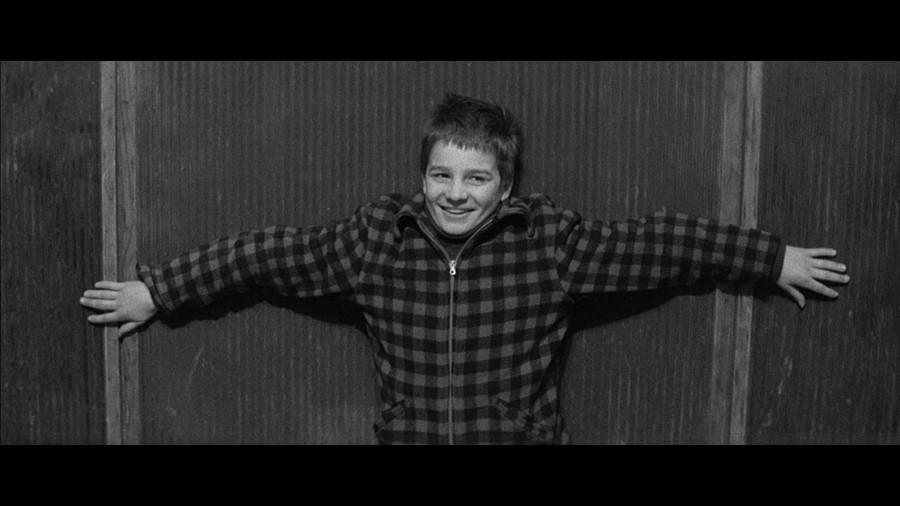 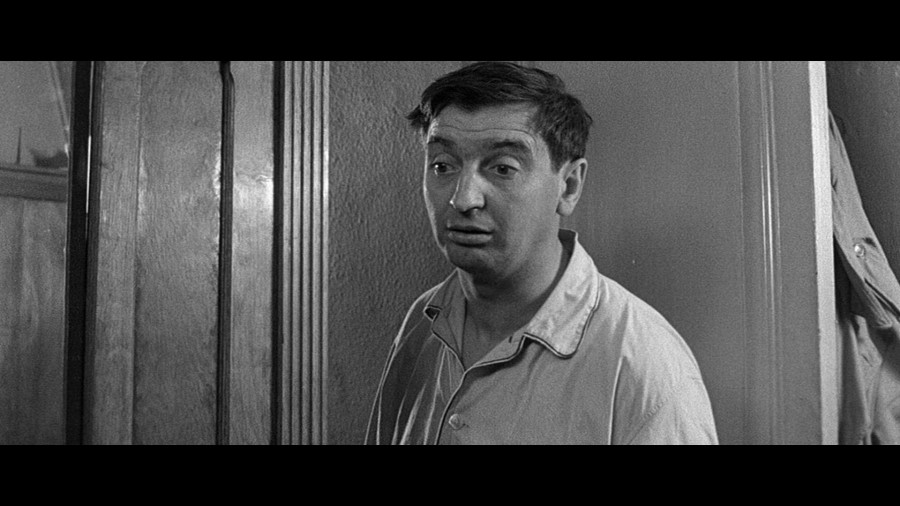 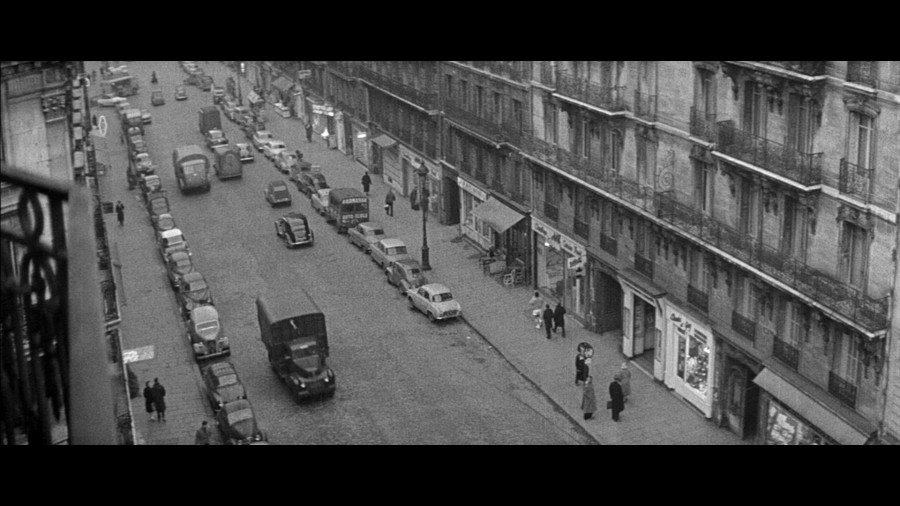 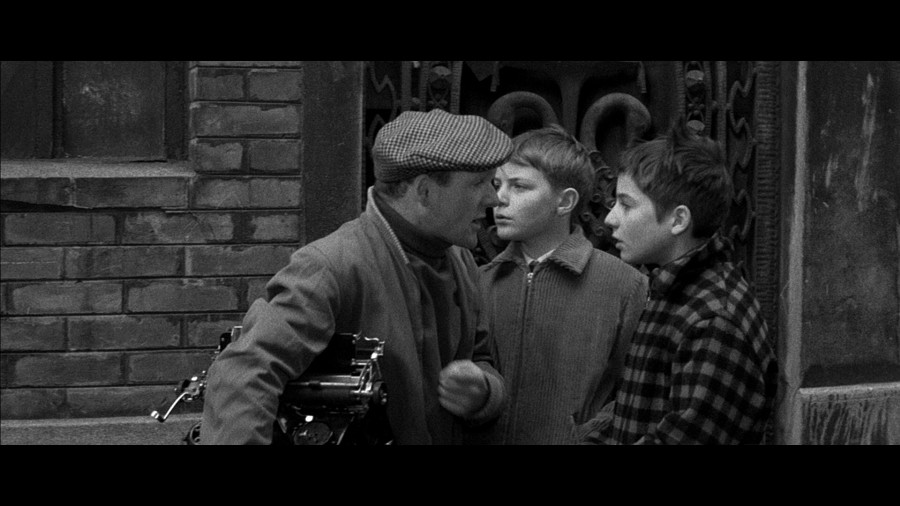 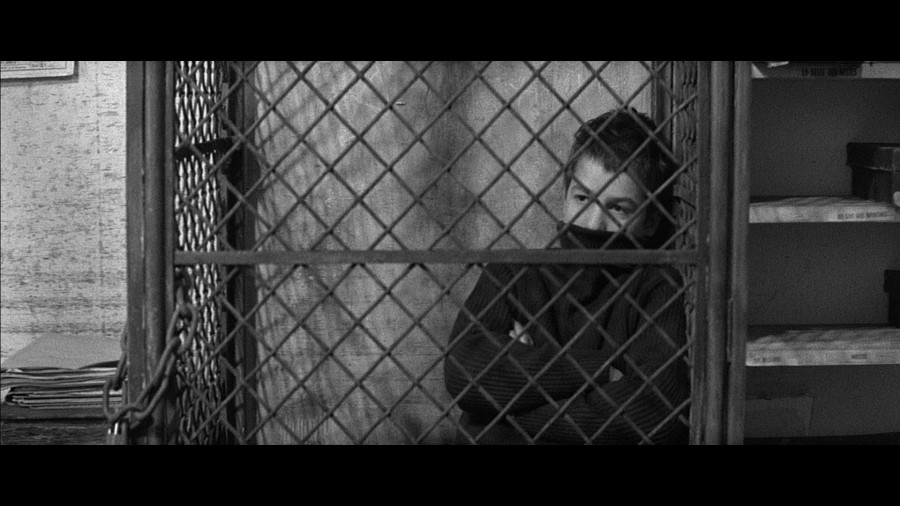 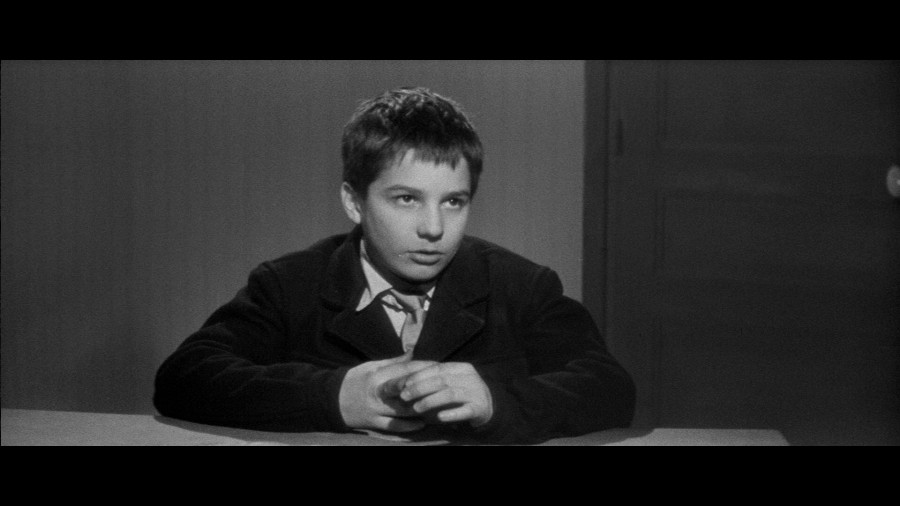 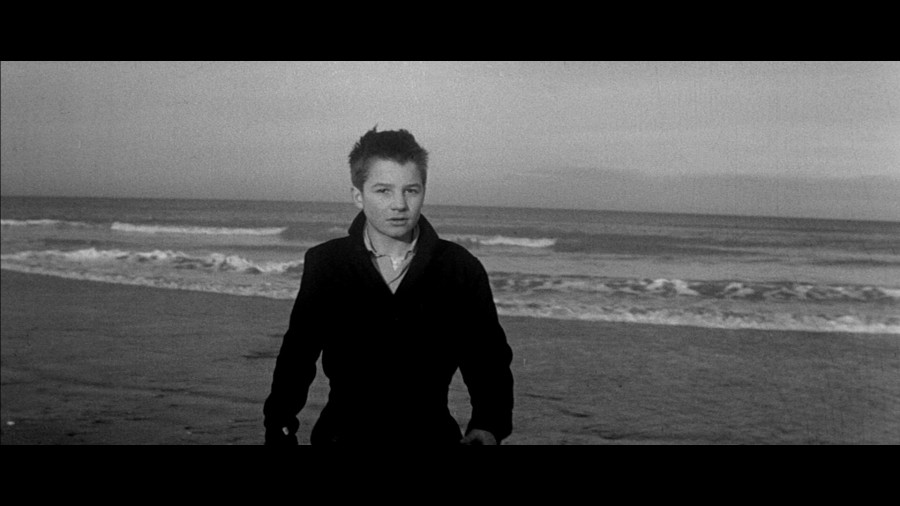 Criterion includes a lossless French mono track. It does sound a little sharper than the DVD's Dolby Digital mono track, but the source still holds it back. The music can sound harsh and voices can sound a tad edgy. The track is clean otherwise, presenting nothing in the way of background noise and damage.

Criterion has carried all of the supplements from the previous lone re-release of the film, which means, unfortunately, it still doesn't carry over the short film Antoine and Colette. The boxset, called The Adventures of Antoine Doinel is still the only currently to get the short film.

Criterion again includes the two commentaries. I just sort of refreshed my memory with them, flipping through them.

The first commentary presents Brian Stonehill, who offers a scholarly analysis of the film, talking about the shooting style, the look, and giving a history of the production. He also offers quotes from some of Truffaut's friends and peers, offered through a translator. It's a nice commentary and I'm glad Criterion has managed to port it through all of their releases, definitely getting their money's worth out of it.

The second commentary is an interview of sorts with Robert Lachenay, a lifelong friend of Truffaut's. The track is in French with English subtitles. This is the same commentary that appeared on the re-release DVD, but not the same French commentary that appeared on the original Criterion DVD (more on this in the next paragraph.) On the track Lachenay covers a variety of topics on his friendship with Truffaut, his work, and the influences from their lives that appear in the film. It's a charming track, if filled with dead space. I'm not a big fan of subtitled commentaries (not really sure why) but it is a decent track and worth viewing the film with.

I suspect the French commentary comes from a French DVD release. The original French commentary track on Criterion's first DVD release was recorded exclusively for Criterion in 1992 and featured both Marcel Moussy and Robert Lachenay. That track was divided into two parts, the first half presenting Moussy and the second half (beginning at around the 46-minute point) featured Lachenay. Unfortunately that track didn't come with English subtitles so I'm not completely sure what is exactly being discussed, though gathered that Moussy was talking about working with Truffaut on a variety of projects, including The 400 Blows and Fahrenheit 451. Lachenay talks about his friendship with Truffaut and influences that appear in the film. I find it odd and sort of disappointing Criterion didn't port this track over and translate it, instead getting another track for the release.

Now for the remaining supplements, all found under 'Supplements".

First up is Audition Footage, which is a rather cool feature, quite funny to watch. The first section of it is an interview with Leaud and it clearly shows what Truffaut obviously saw in him. It's funny how he seems kind of shy but incredibly cocky at the same time. I liked his attitude, which giving the idea he didn't care whether he got the role or not. You also get to see a rehearsal between Leaud and Patrick Auffay as well as a rather amusing bit with Richard Kanayan. I'm surprised they could find this stuff and it makes a great addition.

A supplement called Reflets de Cannes 1959 is a short piece with footage about The 400 Blows' reception at the film festival. It has some great archival footage, especially of Leaud's reception in the theater, and it also has a nice interview with the star, who talks about the truth in the film and how he pulled off the interview scene.

Cinéastes de notre temps presents a 1965 episode from a television program that looks at Truffaut and his films, specifically the the two Antoine Doinel films at the time, The 400 Blows and Antoine and Colette. It lasts about a half hour, offering interviews with Truffaut, who is an incredibly energetic speaker with an incredible passion for the movies, his friends and cast members, including Leaud and Albert Remy. It covers his career as a critic and then makes its way through his film career at the time. Most interesting is how Truffaut managed to work some of Hitchcock's style into The 400 Blows. A nice addition.

Cinepanorama presents a 7-minute portion from a television interview with Truffaut after his return from the US. The interviewer begins in English and Truffaut speaks in French, but then the interviewer herself begins talking in French. Again Truffaut makes for a great interview subject and I found the highlight to be where he talks about the reception of The 400 Blows in some of the countries (the film bombing in Italy and Germany) and even criticizes the film, refusing to call it a masterpiece that others have, saying it is fairly amateurish. Obviously he was his own worst critic.

And then you will also find a theatrical trailer, which was also included on the original release and the re-release DVDs. The only supplement that hasn't made it through from the original DVD is the restoration demonstration, but since the transfers all differ (greatly) this shouldn't be a shock.

Exclusive to the Blu-ray release (and all Blu-ray titles from Criterion) is the Timeline. You can open it from the pop-up menu, or by pressing the RED button on your remote. This is a timeline that shows your current position in the film. It lists the index chapters for the film and the two commentary tracks, and you can also switch to the commentary tracks from here. You also have the ability to 'bookmark' scenes by pressing the GREEN button and return to them by selecting them on the timeline. You can also delete bookmarks by pressing the BLUE button. This is pretty common on Blu-ray (also common on HD DVD) so it's nothing new, but a nice presentation still.

If you own the previous re-release DVD then you more than likely aren't concerned about the supplements, and I'm sure the 'Timeline' isn't a huge deal. But for those that don't own the film on DVD, or still own the original release, the supplements add quite a bit to the release and make it worth picking up.

The supplements are the same as the single DVD that Criterion previously issued, other than their 'Timeline' feature, of course, which is exclusive to their Blu-ray releases. The transfer is a noticeable improvement, though, much sharper, with further restoration. For the transfer alone the new Blu-ray is worth picking up. High recommendation. 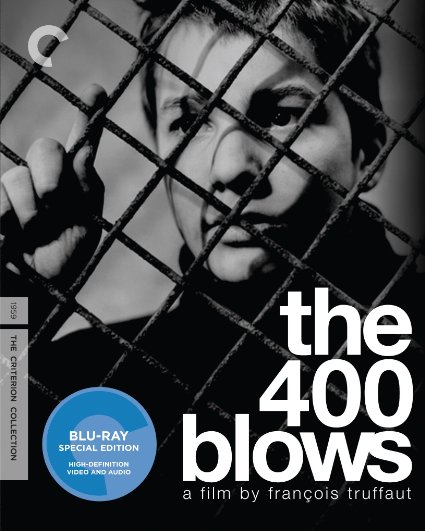