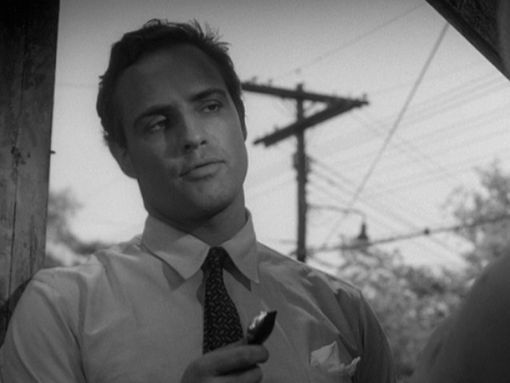 Four Oscar–winning actors—Marlon Brando, Anna Magnani, Joanne Woodward, and Maureen Stapleton—sink their teeth into this enthralling film, which brings together the legendary talents of director Sidney Lumet and writer Tennessee Williams. A smoldering, snakeskin-jacketed Brando is Val Xavier, a drifter trying to go straight. He finds work and solace in a southern small-town variety store run by the married, sexually frustrated Lady Torrance (Magnani), who proves as much a temptation for Val as local wild child Carol Cutrere (Woodward). Lumet captures the intense, fearless performances and Williams’s hot-blooded storytelling and social critique with his customary restraint, resulting in a drama of uncommon sophistication and craft.

Sidney Lumet’s The Fugitive Kind is presented in its original aspect ratio of 1.66:1 on the first dual-layer disc of this two-disc set. The picture has been enhanced for widescreen televisions.

It’s a shame Criterion won’t—or can’t—currently release the film on Blu-ray, but the DVD’s transfer is more than satisfying enough. It’s very clean as a whole, with very few digital artifacts, and it manages to handle the film’s grain rather well, looking fairly natural. While the image can look soft at times due to the source materials, the image does remain sharp and crisp through much of the film and detail, such as what’s found in Brando’s snakeskin jacket, is notable. Contrast also looks exceptional, with some fairly deep blacks and distinctive gray levels.

The source materials are in excellent shape there is minimal damage still present, limited to a few specs of dirt and debris and a few moments where vertical scratches appear. Grain gets heavy in a couple of scenes, but they’re quick moments.

I haven’t seen the MGM disc so I can’t compare but Criterion presents a very stunning standard-def transfer. 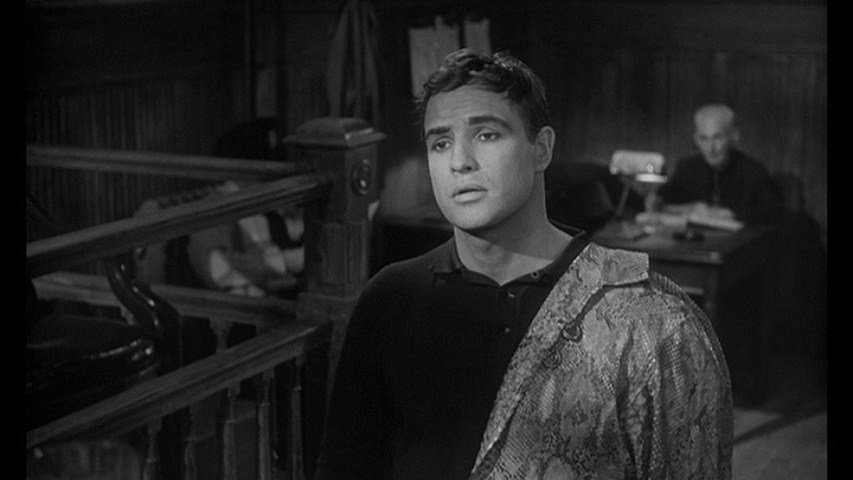 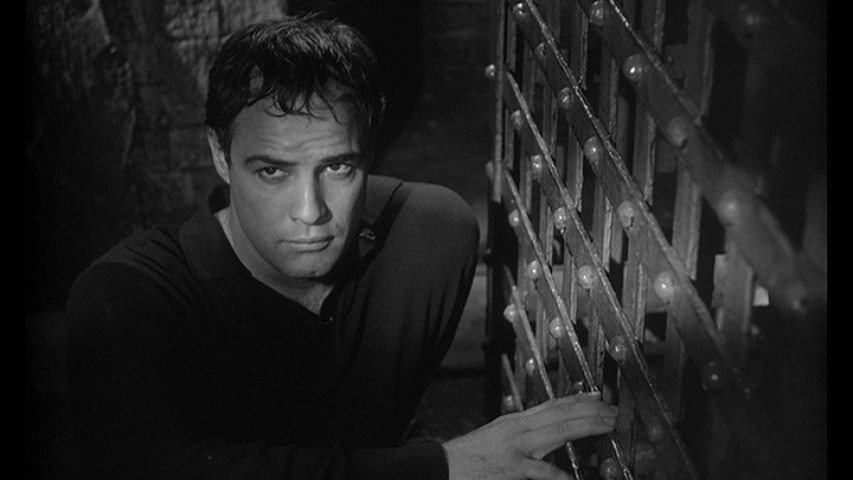 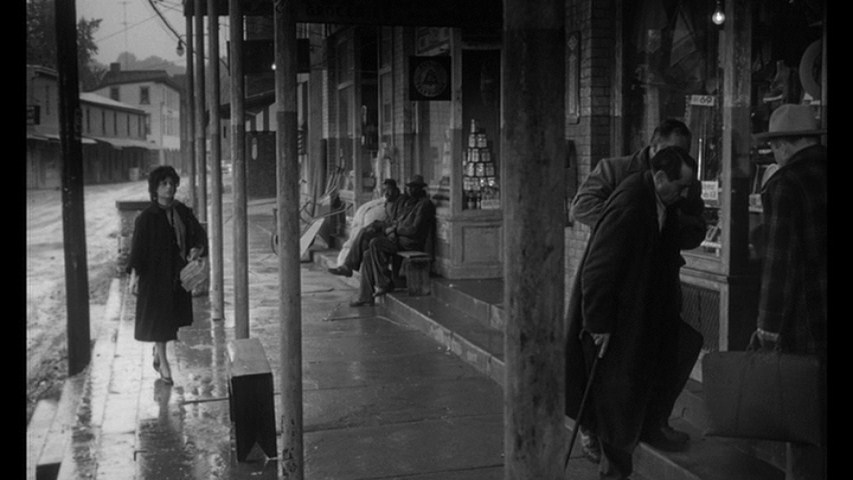 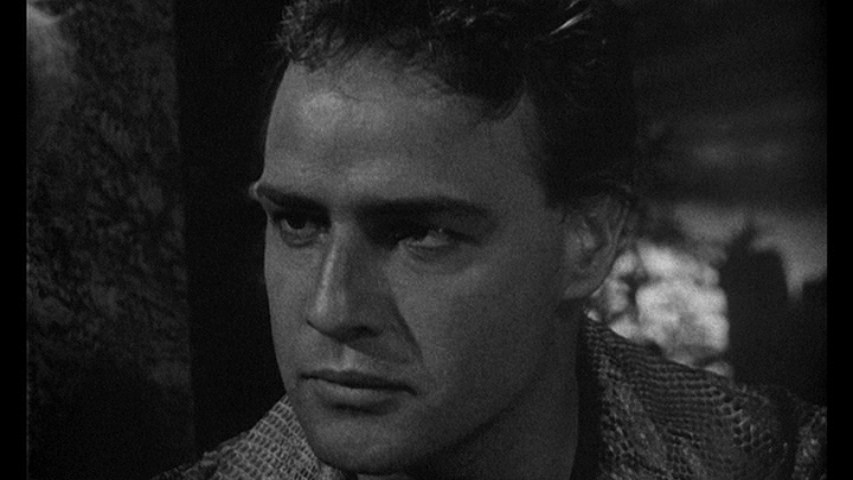 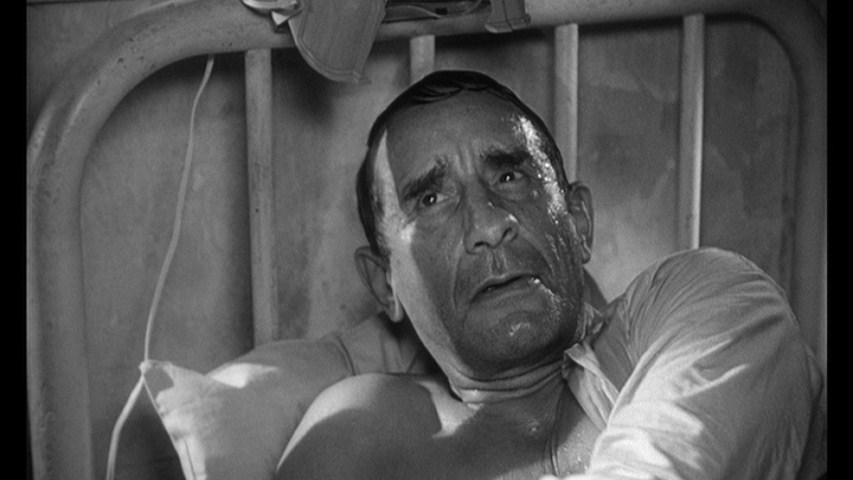 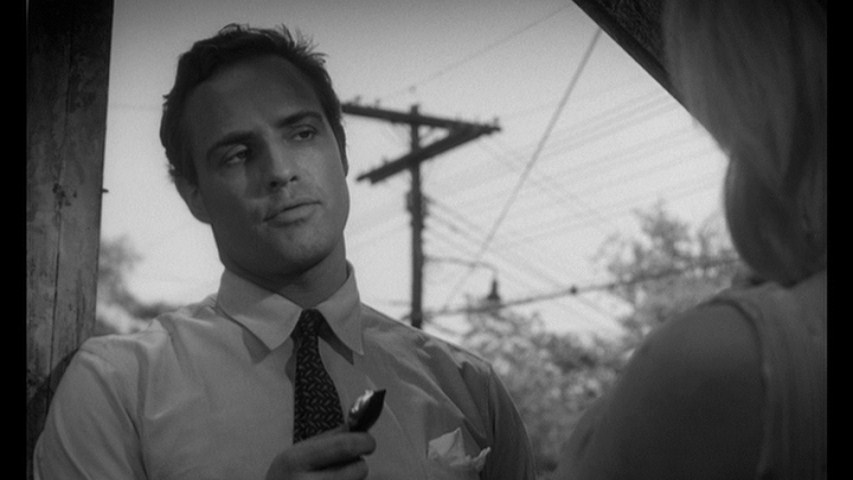 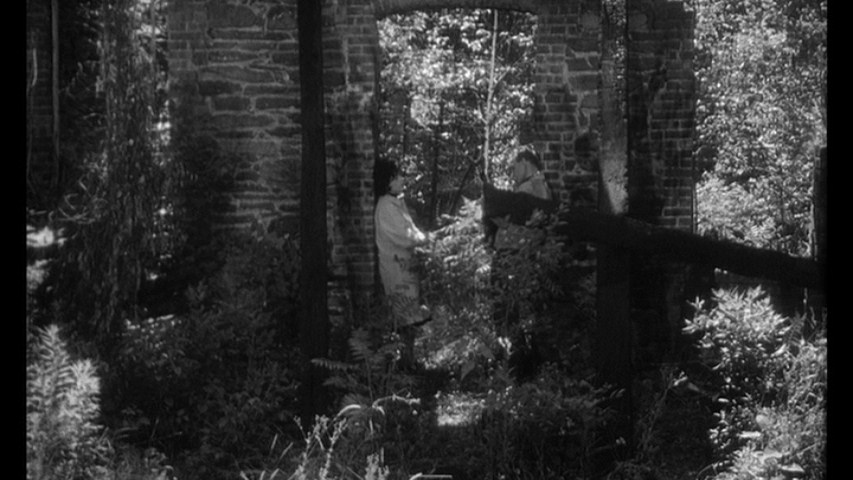 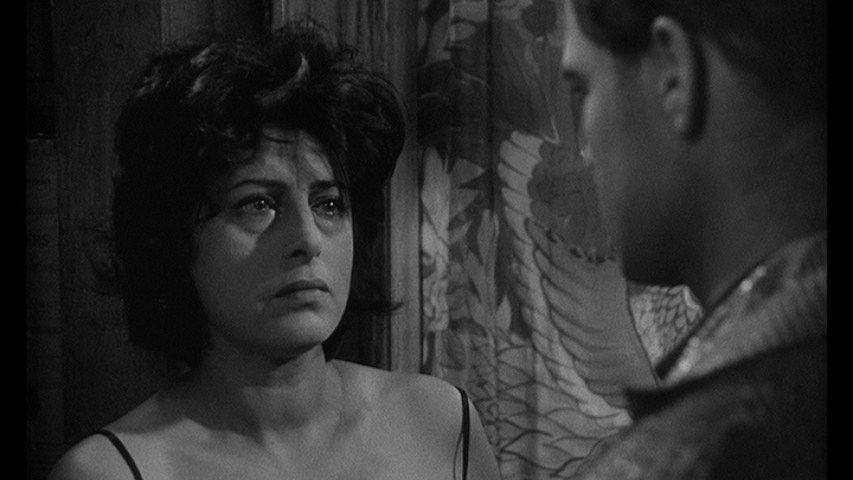 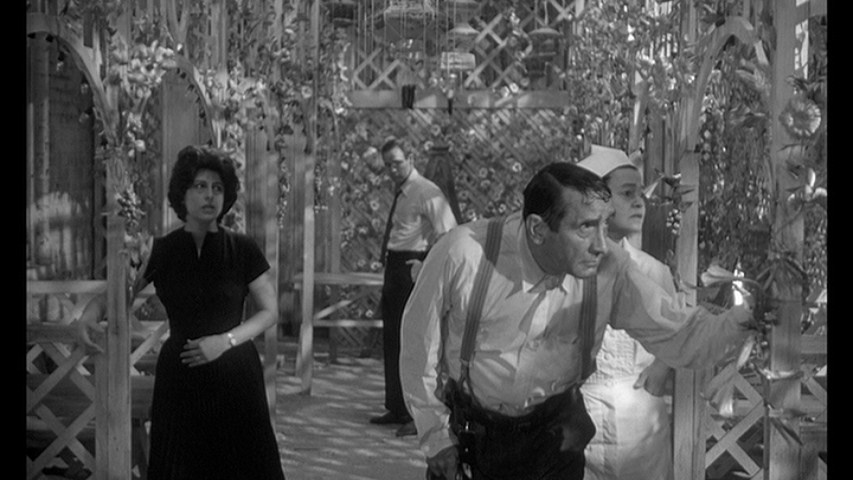 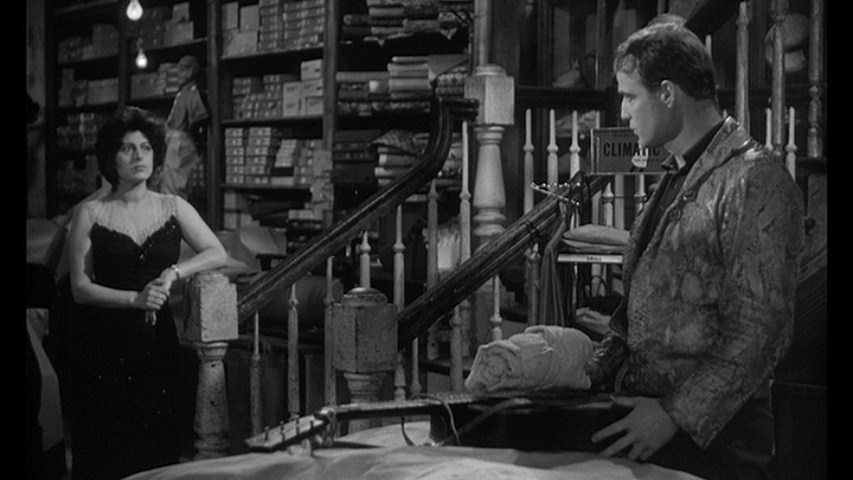 The Dolby Digital mono track is fine, presenting no damage or background noise, but it is a little flat. Brando’s mumbling is problematic at times but otherwise voices sound natural and fairly clean but music can sound a touch tinny and harsh as well. In the end it’s an acceptable, average mono track.

Criterion’s put together a rather interesting set of supplements for this edition, all of which are found on the second dual-layer disc, the first disc being devoted solely to the film.

First is a 28-minute interview with director Sidney Lumet. In the interview Lumet first talks about a live television production he had done based on three Tennessee Williams plays (also included as a feature elsewhere on this disc) and fondly recalls the freedom and experimentation that was common during that “golden age” of television. He then moves on to The Fugitive Kind and the play it’s based on, but spends most of the time talking about his actors, Brando and Magnani in particular, with Magnani apparently being a little difficult as she went through some personal issues (both Lumet and David Thomson, the latter of whom mentioning this in the essay found in the booklet that comes with the DVD, suspect that Magnani may have fallen for Brando and this created some sort of tension.) He touches on the films lighting, focusing on a couple of scenes in particular, talks about some of the themes of the film, and mentions a cut scene with Maureen Stapleton that has unfortunately been lost and one he regrets cutting. It’s a great interview with the director and I do hope Criterion manages to release another one of his films if only so they can include another interview segment with him. It has been divided into 6 chapters.

Williams becomes the focus of this release after that interview. The next feature is a sorta documentary on Williams and his Hollywood career called Hollywood’s Tennessee and The Fugitive Kind, running 27-minutes and featuring historians Robert Bray and R. Barton Palmer, co-authors of the book Hollywood’s Tennessee. It begins with the two, recorded separately, talking about Williams’ early career, his examination of “social ills” and how his plays were accepted. They then get into his desire to have his plays filmed (so that they live on forever) and his move to Hollywood, which was easy since his name had become bankable. It wasn’t exactly all rosy at first starting with the adaptation of The Glass Menagerie, which he considered a laughable disaster, but it improved after that. They cover some of the adaptations, how the films based on his work were able to change the production code, and then focus primarily on The Fugitive Kind. From here they give a brief history of the play it’s based on, first called Battle of Angels which was eventually reworked into the play Orpheus Descending, and then the two get into the mythologies and how they’re presented (or more correctly not presented) in the film. It’s an interesting piece, certainly worth viewing, though I actually wish that they spent as much time on each of the films as they did with The Fugitive Kind, though since this is ultimately the DVD for that film, it isn’t much of a surprise that this is the case.

And finally, probably the most intriguing supplement on here (and certainly makes the edition worthwhile) is Three Films by Tennessee Williams, a live television production directed by Lumet in 1958 for the Kraft Television Theatre. The plays included here are Moony’s Kid Don’t Cry starring Ben Gazarra and Lee Grant, The Last of My Solid Gold Watches starring Thomas Chalmers, Gene Saks, and Alonso Bosan, and then This Property is Condemned starring Zina Bethune and Martin Huston. It’s an excellent inclusion and easily the best feature on here, and though I’m still not sure what to make of Gazarra’s performance in the first play (which is really “stagey”) I did enjoy them all. The transfer is so-so since the plays were recorded using the kinescope process, which consists of a film camera recording the production off of a TV monitor. Still, considering this, they do look pretty good. Williams himself does introductions for the plays but I especially liked that Criterion kept the final bit which is an ad for Kraft, claiming that it is better to “buy by brand names.” The feature runs 55-minutes and has been divided into 5 chapters.

The set then comes with a fairly thin booklet featuring an essay by David Thomson that takes a brief look at Williams work overall, the play Orpheus Descending, which is the basis for The Fugitive Kind, but then settles on focusing on some of the more problematic aspects of the production. A decent read but not great. The middle of the booklet then includes a number of production photos.

I’m surprised Criterion didn’t add anything about Brando considering this is their first title featuring him, though maybe they’re saving that for (hopefully) another release. But what we do get here is all pretty good, the three plays being the best and most interesting supplement on here.

This would have looked great on Blu-ray so it’s disappointing that it’s not receiving a release on the format, but the DVD still comes off looking very strong and it still looks good upscaled. But the features, specifically the TV production, make this a strong edition. Comes with a high recommendation. 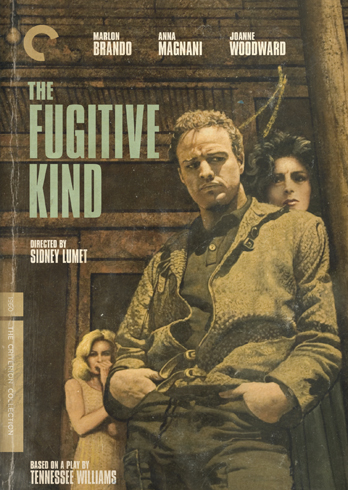