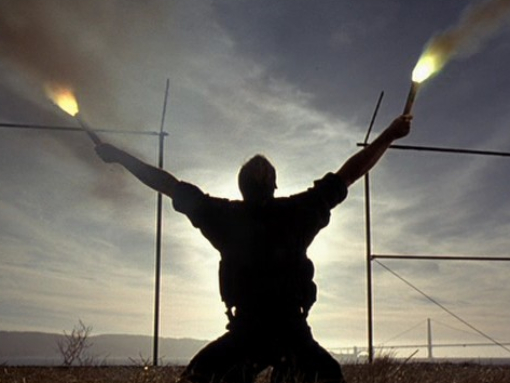 A highly decorated, retired U.S. Marine general (Ed Harris) seizes a stockpile of chemical weapons and takes over Alcatraz, with eighty-one tourists as hostages on the San Francisco Bay isle. His demand: Restitution to families of soldiers who died in covert operations. The response: An elite Navy SEAL team, with support from an FBI chemical-warfare expert (Nicolas Cage) and a former Alcatraz escapee (Sean Connery), is assembled to penetrate the terrorists’ defenses on the island and neutralize the threat before time runs out. The result: A fast-paced, edge-of-your-seat thriller with a first-rate cast, directed by Michael Bay and produced by Don Simpson and Jerry Bruckheimer.

Criterion’s release of Michael Bay’s The Rock is presented in its original aspect ratio of 2.35:1 on the first dual-layer disc of this two-disc set, and has been enhanced for widescreen televisions.

I think it’s a rather solid improvement over Buena Vista’s previous non-anamorphic release, presenting a sharper, cleaner picture. While edge-enhancement can be noticeable at times, artifacts aren’t a real issue. Sharpness and detail is decent, though not up to the level I would have expected for a transfer of a newer, Hollywood blockbuster. Colours look accurate, black levels are excellent, and skin tones come off natural. The film is fast paced and the editing is quick and the DVD’s digital transfer handles it well.

The print shows more flaws than I would have expected for a film that was just under five years old at the time of the DVD’s release, though it’s only limited to a few bits of dirt here and there. Nothing at all bad or even distracting, but surprising still.

Despite some of its short comings it’s a nice looking transfer and suits the film. It’s the best the film looks on DVD, Disney’s previous DVD presenting a rather mediocre image. The Blu-ray release (which contains the same supplements as the Criterion DVD) only presents it better. 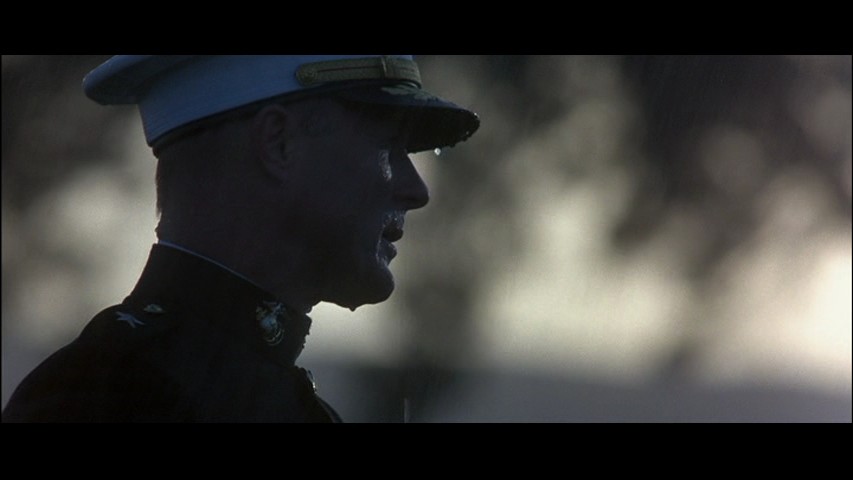 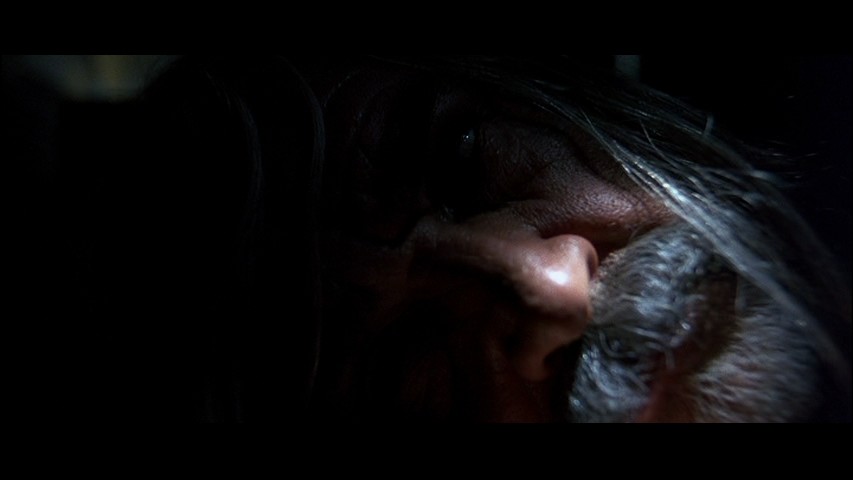 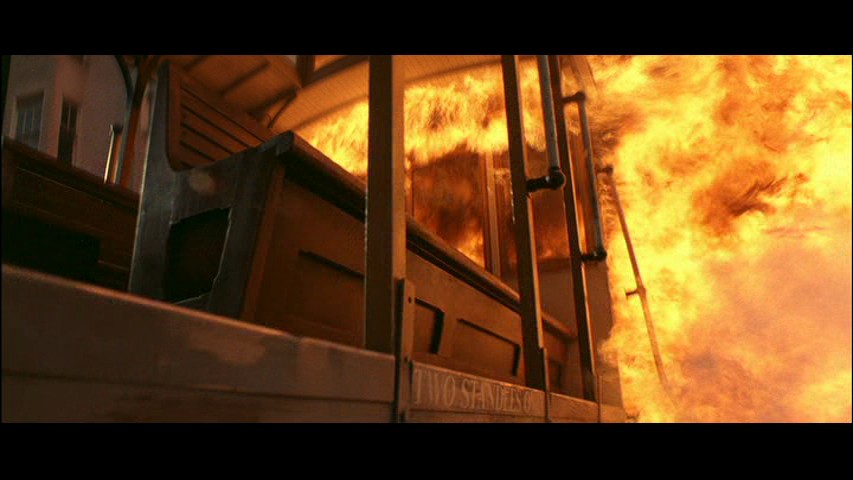 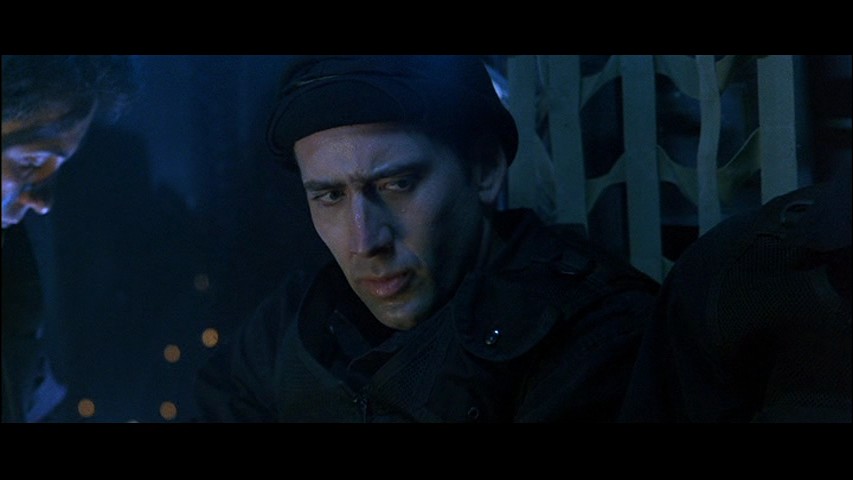 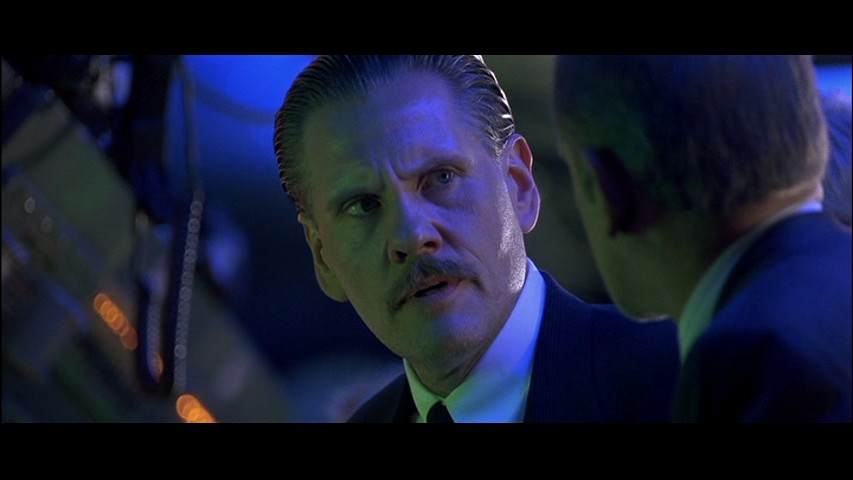 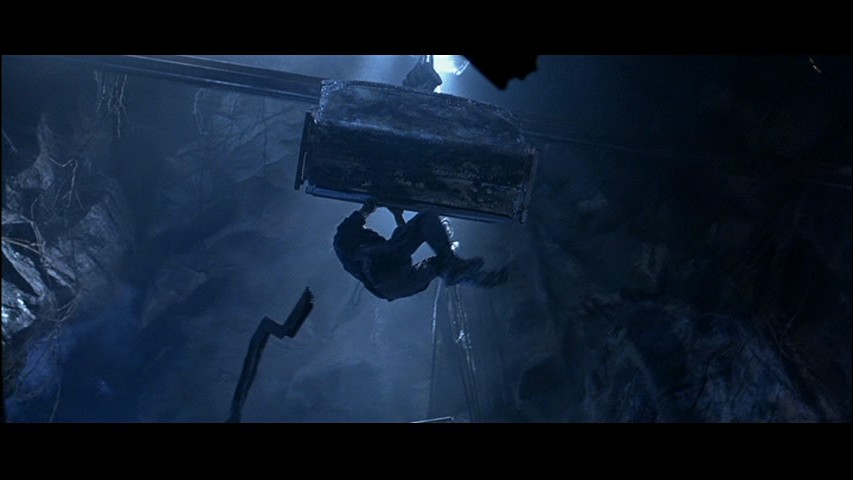 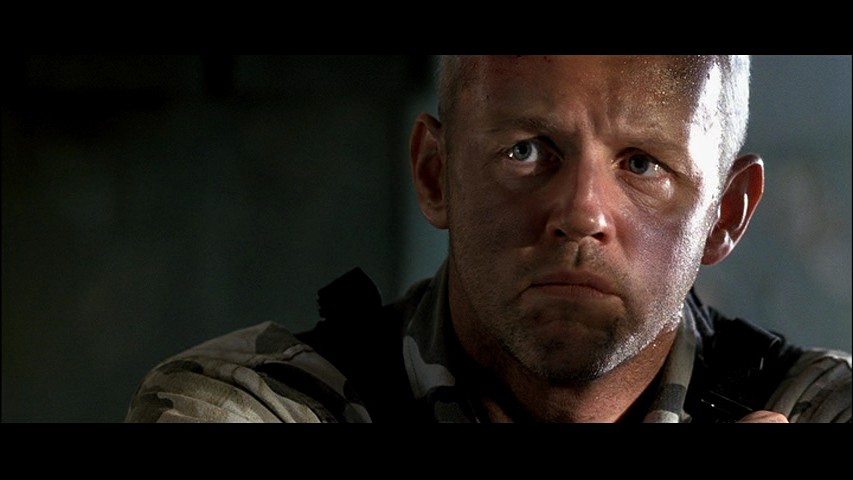 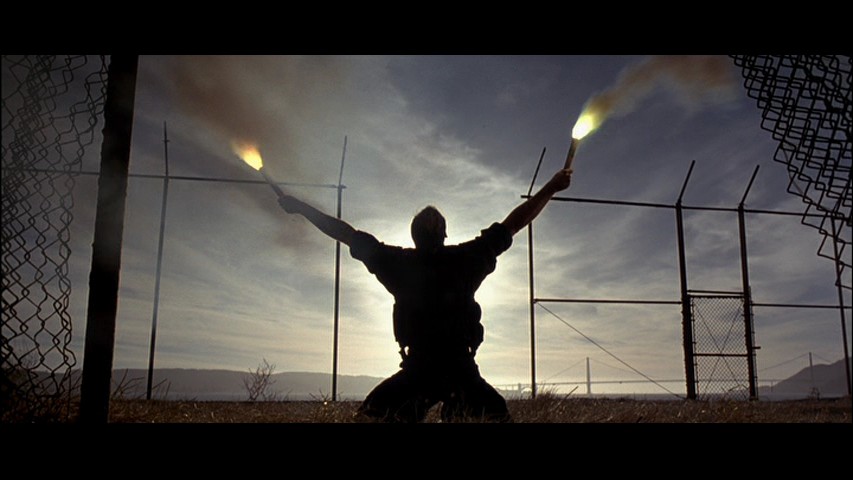 I only sampled the 2.0 track and its fine enough and will serve the film perfectly if you don’t have a 5.1 set up. Sound remains heavy in the front and action scenes bring the surrounds to life, and there’s a decent amount of bass and range.

All three tracks present clear, articulate dialogue. There’s no distortion, no noise, they’re not harsh, just pretty clean tracks. Not a surprise for a newer film, though.

The volume is most certainly higher, the film’s score blasting and reaching some impressive highs. Action sequences with guns blasting away and explosions in the background have a wonderful amount of range and fill the sound environment perfectly. Movement between the speakers is perfect and sound effects in the rear are pretty distinct. It’s a fantastic surround track, perfect for the film.

The DTS track, though, is a different story. This may be one of the few instances where I think a Dolby Digital track works better than a DTS track. I want to say the DTS track may sound a little crisper, but I don’t know if I’m deluding myself simply because it’s a DTS track I have to believe that to be the case (though switching from the DD track to the DTS track, and I should mention this disc is the only one I’ve come across that lets you do it on the fly with the remote, it does sound that way.) But what is clear is that there’s definitely more punch to the Dolby Digital track. It’s louder and the bass is better, in the end suiting the film more. The DTS track, shockingly, lacks a lot of the power the Dolby Digital track has.

I was a little let down by this when I first viewed the DVD, because The Rock most certainly calls out for an incredible DTS track. Thankfully the Dolby Digital track serves the film well.

Criterion has ported most of their supplements over from their previous laserdisc. While not as super-extensive as some of Criterion’s other releases, I found the supplements interesting overall.

On the first disc is a running audio commentary by Michael Bay, Jerry Bruckheimer, Nicolas Cage, Ed Harris and technical advisor Harry Humphries. Like most other early commentary tracks by Criterion this has everyone recorded separately and then edited together. I found it offered a lot of insight into making films of this type, mostly from Bruckheimer and Bay. I was actually a little shocked at how serious the track really is. Everyone talks about the effort that goes into the film, of working with everyone else (getting a constant reminder you can't "BS" Sean Connery) and some interesting behind the scenes bits like Ed Harris destroying props. Harris was the most interesting participant, taking his work very seriously (along with Cage), and I wish he had more air time. Most commentaries for films like this come off fairly loose, and while there is some of this, it’s overall a very tight, very informative track, much better than I would have expected.

The second single-layer disc presents the remaining supplements, divided between a few sections. The first section is called "Production Secrets" and it contains some behind the scene stuff. First is On the Range with the Navy Seals, which is a 6-minute featurette with consultant Harry Humphries, showing a training class for Navy Seals along with interviews. Altogether it’s probably far too brief but has some great stuff in it.

Dos and Don'ts of Hollywood Gunplay is an odd piece but still fairly interesting. Through this 8-minute piece Humphries teaches us about the proper way of gun handling and he also points out many mistakes Hollywood movies make. I have to admit it does ruin some of the fun of the Hollywood action film.

An excerpt from an episode of Movie Magic shows some of the effect work behind the film, including the finale with the bomb dropping. You get a step by step process into constructing the scene. These are always interesting and this is no different.

You then get Special Effects: the Dive Sequence, containing behind-the-scenes footage of how the dive sequence was put together, which was done with puppets to my surprise.

The next main section is “Publicity and Promotion", which contains the theatrical trailer and 5 TV Spots, all playing in sequence. You also get The Rock Premiere on Alcatraz, which is an interesting 2 minute PR blip that shows everyone gathered at the premiere and how everything was set-up on the island.

There is a 9 minute collection of outtakes and before you roll your eyes I have to tell you these aren’t your usual “oh look, I flubbed my line again, ha ha ha” kind of outtakes. In the commentary Harris comments on losing his temper a couple times and laughs about it. The guy seems nice enough but when he's working, he obviously gets right into it. One of the outtakes we get is a scene with Harris’ character talking to his men and whenever Harris messes up he swears, screams, yells, and at times I swear he’s foaming at the mouth. Sometimes he does have a chuckle but he then becomes really violent and somewhat scary. The outtakes also include some okay laughs like an elevator that won't work and Nicolas Cage tripping (which I think would have been a good thing to keep in). Worth a quick look.

Criterion has also included excerpts from a documentary called The Secrets of Alcatraz. Only 14 and a half minutes are included here and it's a shame the full thing was not included (I'm guessing they couldn't get the rights to the full thing). Still, in its brief time it gives a fairly good, if brief history of the island and the prison. History buffs may enjoy this, and I got a kick out of it.

And closing of the second disc is a 16 minute interview with Jerry Bruckheimer who talks a bit about his film history and touches on the films that made him the big producer he is today (American Gigolo, Flashdance, Top Gun) and then talks about The Rock a bit and also about how he has many future projects. The guy is fairly monotone but I found what he had to say interesting enough.

And then closing the set is an insert containing a reprint of Roger Ebert’s review for the film. He mentions possible references to Pulp Fiction and Reservoir Dogs, seeming to be convinced that they were forms of revenge for Quentin Tarantino’s comments about Top Gun.

One thing that is missing that was on the laserdisc and was included in the original specs of the DVD release was Michael Bay's "Got Milk?" ad. I've seen a bunch of these and I was unaware that Bay did one..

It is a nicely put together set of supplements, though, better than most DVD releases for films of this type. While I think Criterion would actually do a better job in this regard with their eventual Armageddon release, they do offer an interesting enough examination into what goes into making a film of this type.

I’ll admit, with little to no shame, that I enjoy The Rock. Bay’s made some awful films, there’s no doubt about it, but I still think this one shows that Bay can churn out a good blow-stuff-up action film when he gets a decent enough (if ludicrous) script. Criterion’s DVD serves the film up well. The transfer is good if not great (in some regards I must admit I think Criterion’s non-anamorphic transfer of Armageddon may look better, at least on 4:3 televisions) and I’m disappointed that the DTS track wasn’t better (talk about lost potential) but I’ve always enjoyed the supplements and they are a step above what you’d find on normal studio DVDs, and they’re all worth going through (the commentary is especially good.) For DVD I’d recommend this release over the other Disney DVD, despite the higher price. If you have a Blu-ray player, though, I’d steer you towards that release from Buena Vista. It has a better transfer and still has the same supplements. 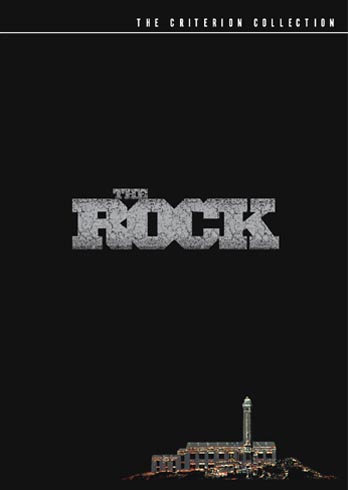