﻿ The Umbrellas of Cherbourg Review :: Criterion Forum
The Criterion Collection

The Umbrellas of Cherbourg 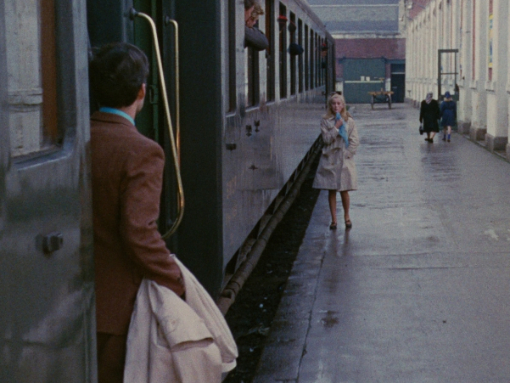 An angelically beautiful Catherine Deneuve was launched into stardom by this glorious musical heart-tugger from Jacques Demy. She plays an umbrella-shop owner’s delicate daughter, glowing with first love for a handsome garage mechanic, played by Nino Castelnuovo. When the boy is shipped off to fight in Algeria, the two lovers must grow up quickly. Exquisitely designed in a kaleidoscope of colors, and told entirely through the lilting songs of the great composer Michel Legrand, The Umbrellas of Cherbourg is one of the most revered and unorthodox movie musicals of all time.

After initially being released in their own Essential Jacques Demy box set, the Criterion Collection presents Jacques Demy’s The Umbrellas of Cherbourg in a new individual Blu-ray edition in its original aspect ratio of 1.85:1. This 1080p/24hz high-definition presentation is taken from a new 2K restoration, scanned from the three-strip separation masters and the original camera negative.

This disc appears to be an exact port of the one in the box set so no surprise that the presentation looks the same. Of the titles in the set I felt this one looked best and coming back to it I still find it particularly strong. It’s a very colourful film, laced with pinks, greens, reds and pink, and all these colours do manage to pop brilliantly off of the screen. Black levels are also very strong, crushing not appearing to be a particular problem and shadow details are excellent.

The digital presentation itself is also very good. Details are sharp, rendering natural looking textures in the process. Film grain is evident and it looks quite clean and natural itself. In all I found it very bright, vibrant, and filmic in look. It’s a wonderful looking image suiting the energy of the film. 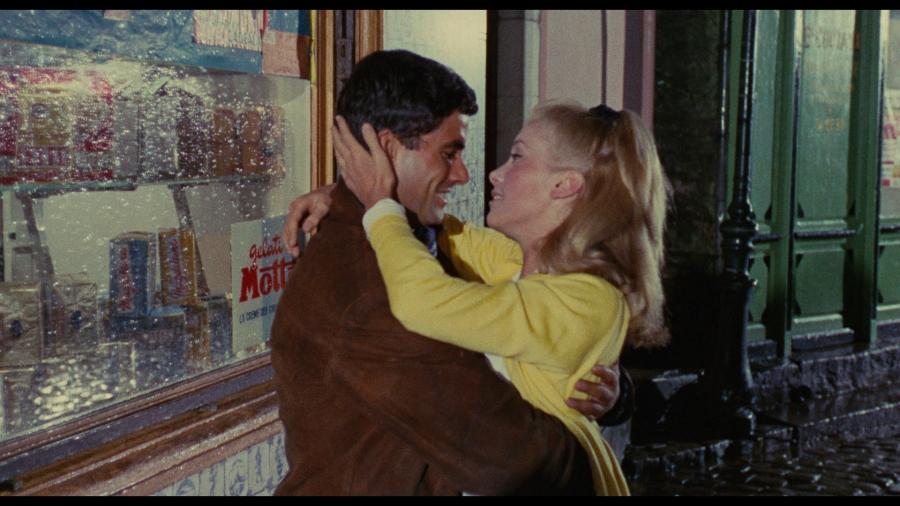 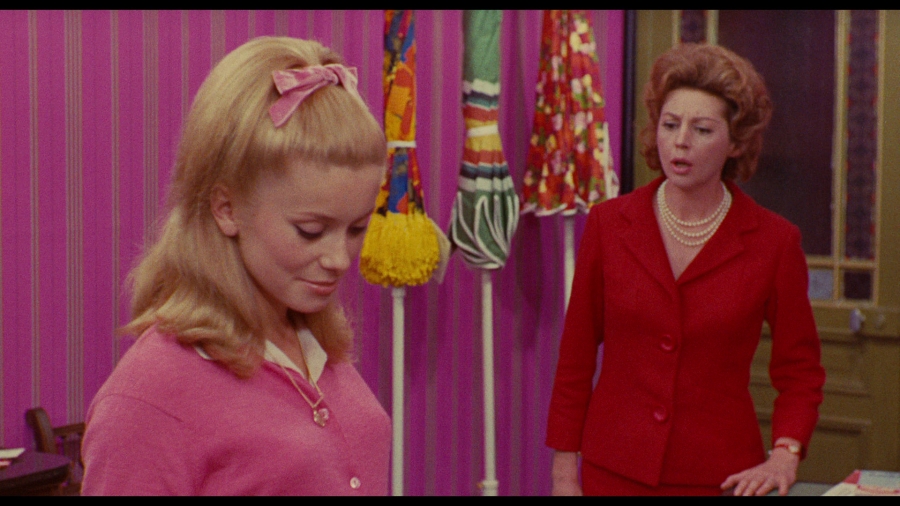 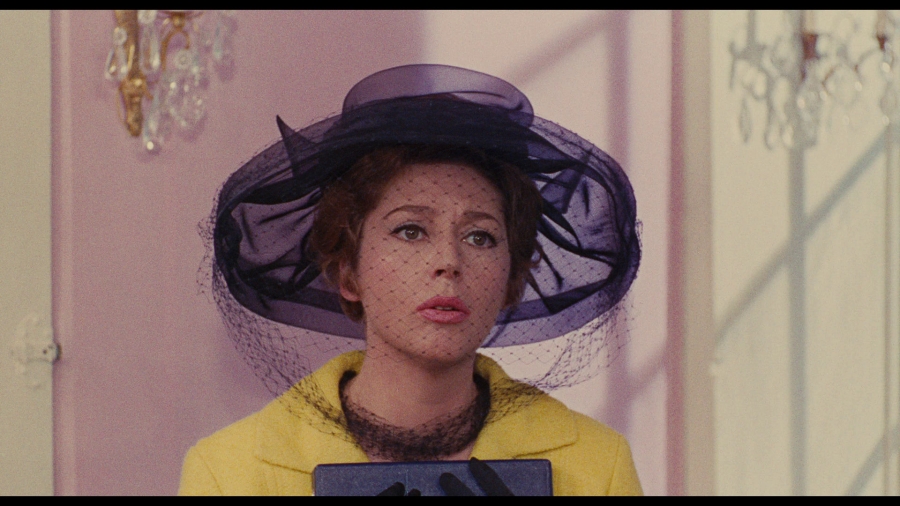 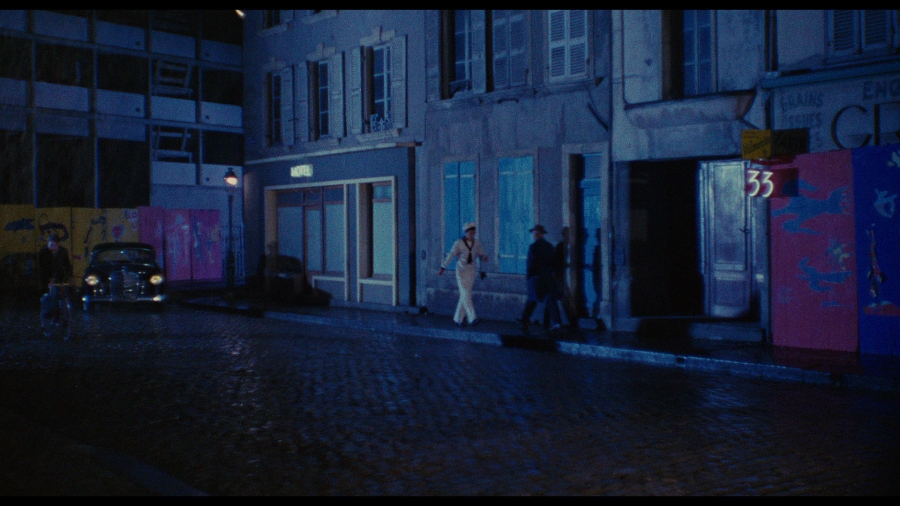 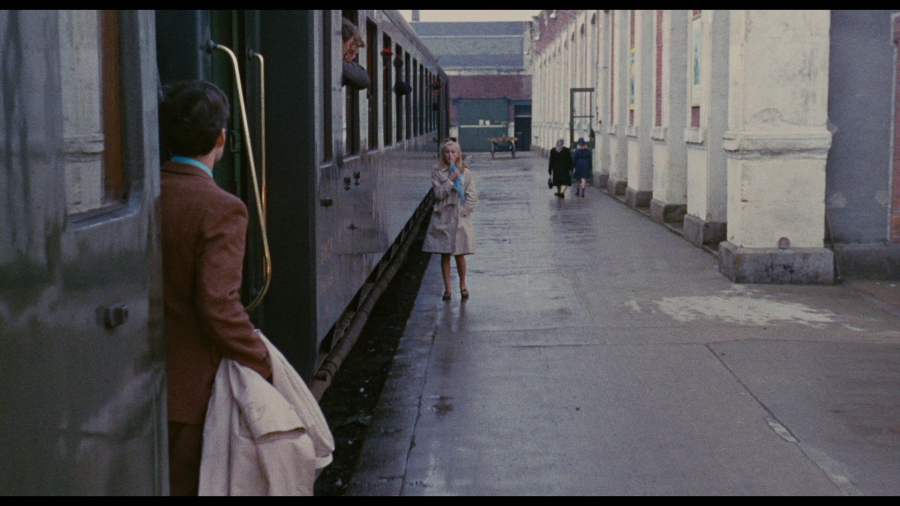 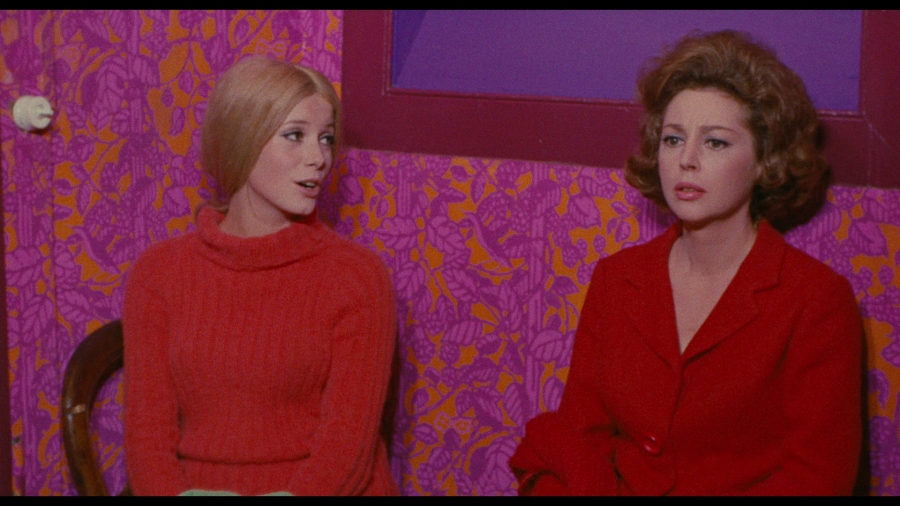 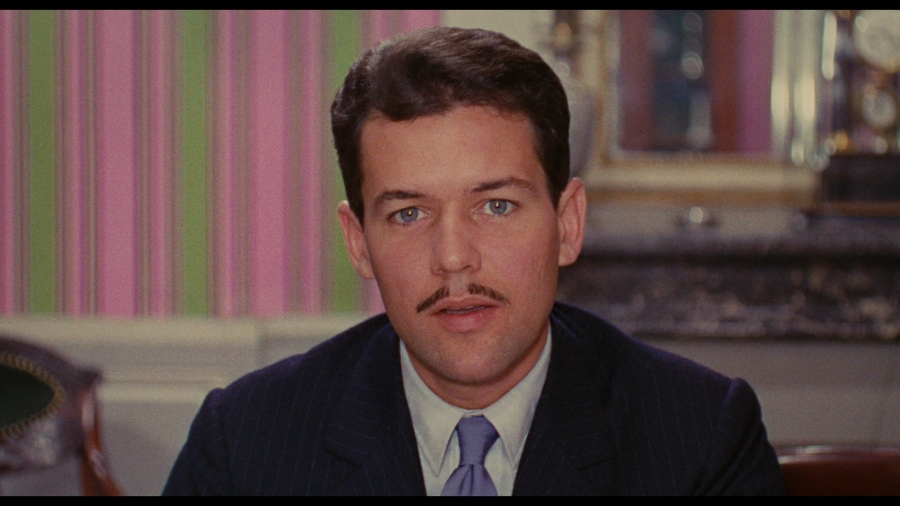 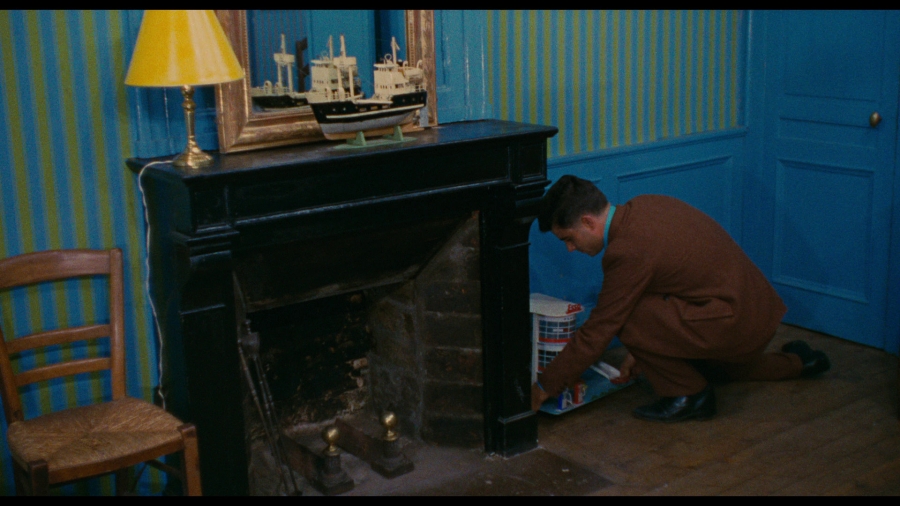 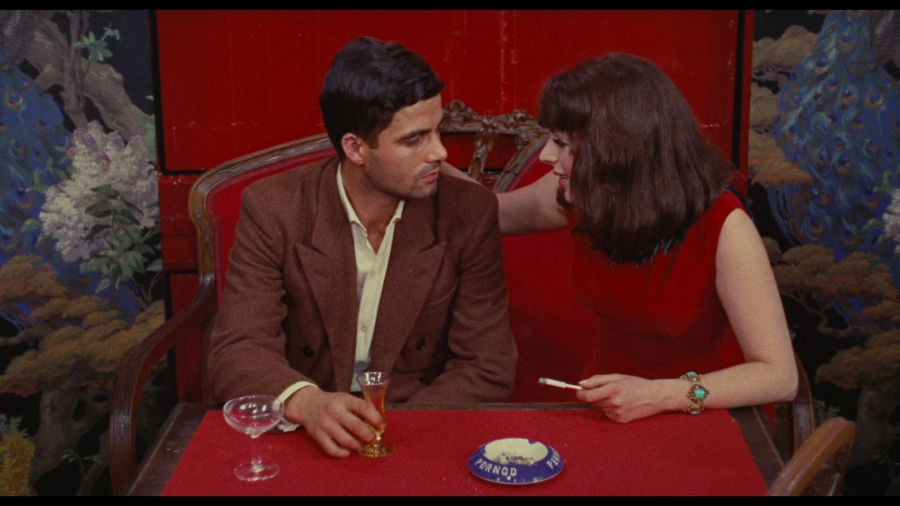 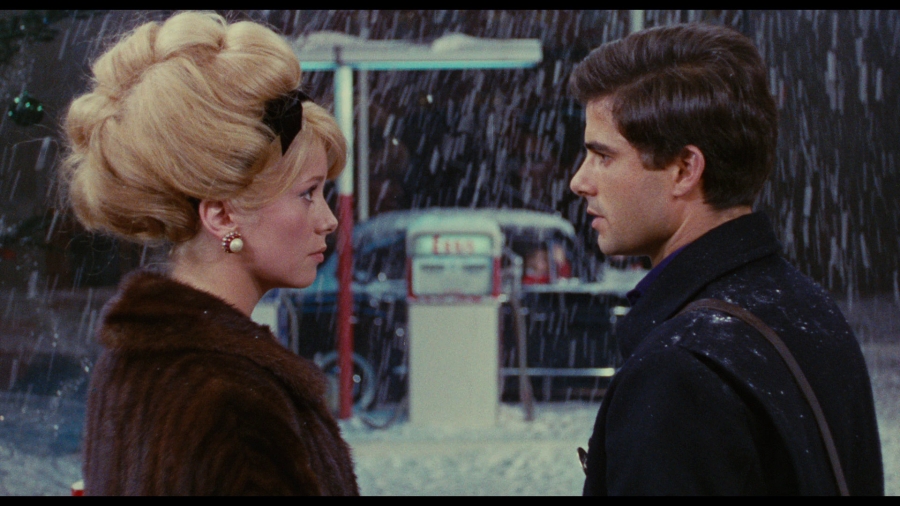 Like the image, as far as I can tell, the audio, presented again in DTS-HD MA 5.1 surround (no monaural option is available). Again the track is more monaural in nature, aiming a good chunk of audio towards the fronts with very little movement between them. Activity in the rear speakers is primarily limited to subtly delivering sections of Legrand’s score. It rarely calls attention to itself but it does effectively immerse the viewer. Obviously restored and remixed the score never sounds to be a product of its age, bringing superb dynamic range and fidelity. Dialogue/singing sounds clear and articulate and the source has been nicely cleaned up as I didn’t detect any damage or general wear.

In the original Demy box set The Umbrellas of Cherbourg was the more “stacked” edition in terms of extras and all of that material has been carried over to this individual release. It starts with a 2008 episode from the program A Film and its Time. Entitled Once Upon a Time… “The Umbrellas of Cherbourg” it’s similar in structure to an episode from the same program found on Criterion’s edition of Tess: it offers a general production history of the film, while also going over certain landmark moments that were happening at the time and how the film came to somehow address them or at least maybe be some sort of reprieve of sorts from them. For the film’s production it goes over the development of the music through an interview with Legrand, and then gets into detail about the difficulty in finding financing, the casting of Deneuve, its actual production and then the success it had after its release. The documentary also looks at the wave of music being released at the time, women’s rights, and the general malaise that was felt in France after the Algerian war, which is of course a major plot point in the film. There’s also a portion dedicated to the French New Wave and how Demy fit into that, even if his films (at least his later ones) didn’t exactly fit the mold. I actually enjoy these and appreciate that they’re not your typical making-ofs, simply going by the numbers, but they try to also offer some context from the time period. This episode runs around 54-minutes.

Following this is a new 23-minute interview with film scholar Rodney Hill. In it he talks about the French New Wave, how it came to be, and what it represented. Though Demy is a member of the New Wave directors his films can get overlooked as being “New Wave” because they don’t fit the general ideal of what a New Wave film is. He gives a brief history as to how the New Wave was born (a sort of retaliation to what many considered overblown, big budget French films) and checks off a list of common, though not necessary factors that go into a New Wave film: they are usually personal, casual in look (low lighting or at least natural light), freely reference other films and filmmakers, non-traditional editing, and so on. Demy’s Lola and Bay of Angels certainly fit that list, but he argues how his later bigger, more polished spectacles still follow some of these same elements. In all honesty I’m not overly concerned whether Umbrellas or The Young Girls of Rochefort and so on follow whatever “rules” have been associated with the French New Wave, but Hill does actually deliver a fairly decent primer on the movement and the feature probably works best for that.

Criterion next digs up an interview with Michel Legrand and Demy from the archives. From a 1964 episode of the French program Cinépanorama the two talk about the all-musical aspect of the film and how they came to decide to go this route with the film. Though the interviewer keeps questioning Legrand about the validity of a musician doing film scores (he basically keeps asking him questions around how film scores are seen as a “lesser” effort in the music world) it’s actually a fairly decent interview with the two talking about their goals with the. They even ask the all-important question as to whether Demy sings in the shower. The excerpt runs about 11-minutes.

We then get two audio segments from conversations with Michel Legrand and Catherine Deneuve recorded at the National Film Theatre in 1991 and 1983 respectively.

Legrand’s runs about 27-minutes and features the composer talking about his life and his career path. He covers his possible influences (his dad, who left one day to get matches only to never return may have been one) and his training. He’s asked about the German occupation and any possible influences it may have had (he admits that as a child he didn’t really see the danger) and then how he got into film scoring, becoming a sort of darling of New Wave directors. He covers Lola, his first collaboration with Demy after Quincy Jones was unable to write a song for the film, and amusingly recounts how he first saw the film: since Demy didn’t have the money to finish the sound he showed it to Legrand silent but recited all the dialogue himself. He then talks about Umbrellas and other collaborations.

Deneuve’s segment only runs about 11-minutes but she gets into great detail about getting into acting (her sister was the primary reason) and recalls the filming of Umbrellas, the period of which she calls one of her best memories. The film and Demy also taught her a lot about film acting and she shares these lessons, primarily how to work with the camera, which you can’t be completely unaware of.

Both are very solid segments, offering a more personal look at the two and their work while also giving a nice bit of background information about the film’s production.

There is then a 6-minute restoration demonstration showing the work that went into cleaning up the film and restoring its colours, and their desire to keep it true to Demy’s wishes. You get to see some examples and some before-and-after shots. The disc then closes with a theatrical trailer.

Criterion then includes an insert featuring an essay by Jim Ridley. It’s the same essay found in the box set’s booklet, Ridley going over how the film first entranced him.

This was the strongest title in the Demy box set, especially for supplements, which offer both a decent scholarly slant while also providing a decent amount of coverage on its making.

If on owns the Demy box set there is no need to pick this up: it is the exact same disc as far as I can tell. Still, it’s a very strong edition and for those that passed on the set, hoping to get this film on its own at some point, will find this well worth picking up. 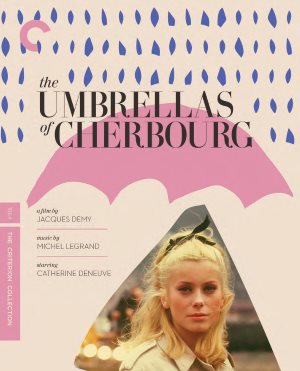 The Umbrellas of Cherbourg (DVD/Blu-ray)

The Young Girls of Rochefort (Blu-ray)

The Young Girls of Rochefort (DVD/Blu-ray)