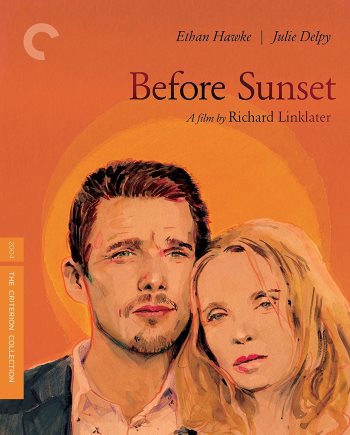 Review Discuss Compare
This title is only available in the box set The Before Trilogy
Buy At:

Directed by: Richard Linklater
Featuring: Ethan Hawke, Julie Delpy
In the breathtaking follow-up to Before Sunrise, Celine tracks down Jesse, now a newly minted author, at the tail end of his book tour in Paris, with only a few hours left before his flight back home to the States. Meeting almost a decade after their short-lived romance in Vienna, the pair find their chemistry rekindled by increasingly candid exchanges about professional setbacks, marital disappointments, and the compromises of adulthood. Impelled by an urgent sense of the transience of human connection, Before Sunset remains Linklater’s most seductive experiment with time’s inexorable passage and the way love can seem to stop it in its tracks.