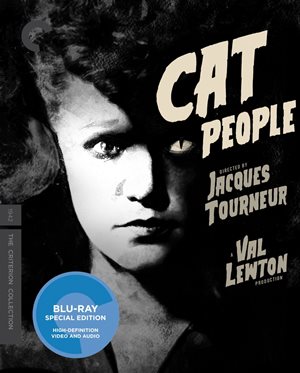 Directed by: Jacques Tourneur
Featuring: Simone Simon, Kent Smith, Tom Conway, Jane Randolph, Jack Holt
The first of the horror films producer Val Lewton made for RKO Pictures redefined the genre by leaving its most frightening terrors to its audience’s imagination. Simone Simon stars as a Serbian émigré in Manhattan who believes that, because of an ancient curse, any physical intimacy with the man she loves (Kent Smith) will turn her into a feline predator. Lewton, a consummate producer-auteur who oversaw every aspect of his projects, found an ideal director in Jacques Tourneur, a chiaroscuro stylist adept at keeping viewers off-kilter with startling compositions and psychological innuendo. Together, they eschewed the canned effects of earlier monster movies in favor of shocking with subtle shadows and creative audio cues. One of the studio’s most successful movies of the 1940s, Cat People raised the creature feature to new heights of sophistication and mystery.