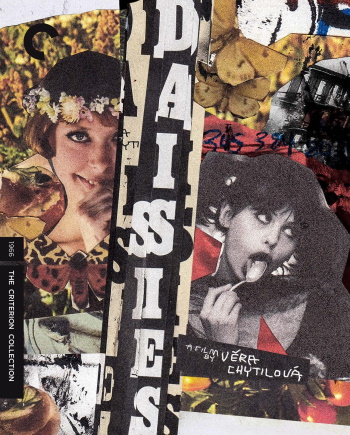 If the entire world is bad, why shouldn’t we be? Adopting this insolent attitude as their guiding philosophy, a pair of hedonistic young women (Ivana Karbanová and Jitka Cerhová), both named Marie, embark on a gleefully debauched odyssey of gluttony, giddy destruction, and antipatriarchal resistance, in which nothing is safe from their nihilistic pursuit of pleasure. But what happens when the fun is over? Matching her anarchic message with an equally radical aesthetic, director Věra Chytilová, with the close collaboration of cinematographer Jaroslav Kučera, unleashes an optical storm of fluctuating film stocks, kaleidoscopic montages, cartoonish stop-motion cutouts, and surreal costumes designed by Ester Krumbachová, who also cowrote the script. The result is Daisies, the most defiant provocation of the Czechoslovak New Wave, an exuberant call to rebellion aimed squarely at those who uphold authoritarian oppression in any form.