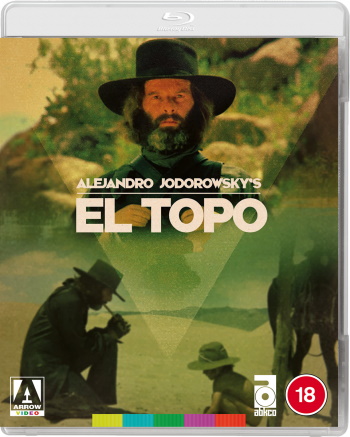 Jodorowsky's most violent and notorious film sees the director play 'The Mole' of the title: a black-clad. master gunfighter. In the first half, El Topo journeys across the desert dreamscape with his young son (Brontis Jodorowsky) to duel with four sharp-shooting Zen masters, who each bestow a Great Lesson before they die. In the second half, El Topo becomes the guru of a subterranean tribe of deformed outcasts who he must liberate from depraved cultists in a neighbouring town.

A countercultural masterpiece which ingeniously combines iconic Americana symbolism with Jodorowsky's own idiosyncratic surrealist aesthetic, El Topo is an incredible journey through nightmarish violence, mind-bending mysticism and awe-inspiring imagery. This era-defining film is now presented in a stunning new 4K restoration with a wealth of newly produced and archival extras.