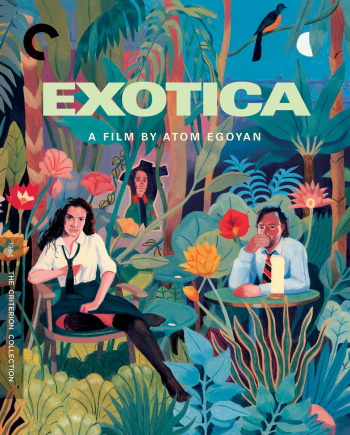 One of the defining independent films of the 1990s, Atom Egoyan’s mesmerizing international breakthrough Exotica takes the conventions of the psychological thriller into bold new territory—unsettling, dreamlike, and empathetic. At the neon-drenched Toronto strip club of the film’s title, a coterie of lost and damaged souls—including a man haunted by grief (Bruce Greenwood), a young woman with whom he shares an enigmatic bond (Mia Kirshner), an obsessive emcee (Elias Koteas), and a smuggler of rare bird eggs (Don McKellar)—search for redemption as they work through the traumas of their mysteriously interconnected histories in an obsessive cycle of sex, pain, jealousy, and catharsis. Masterfully weaving together past and present, Egoyan constructs a spellbinding narrative puzzle, the full emotional impact of which doesn’t hit until the last piece is in place.