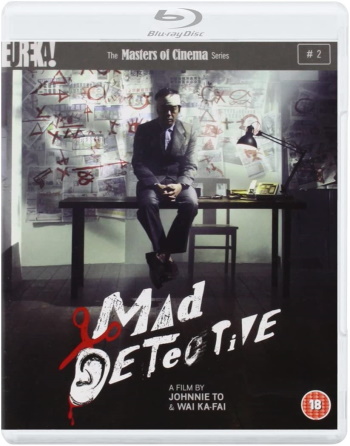 Detective Bun (Lau Ching Wan) was recognised as a talented criminal profiler until he sliced off his right ear to offer as a gift at his chief’s farewell party. Branded as ‘mad’ and discharged from the force, he has lived in seclusion with his beloved wife May (Kelly Lin) ever since. Strangely, Bun has the ability to ‘see’ a person’s inner personality, their subconscious desires, emotions, and mental state. When a missing police gun is linked to several heists and murders, hotshot Inspector Ho (Andy On) calls on the valuable skills of his former mentor Bun to help unlock the killer’s identity. However, Bun’s unorthodox methods point to a fellow detective and take a schizophrenic turn for the worse…

Nominated for the Golden Lion at Venice, multiple prizewinner at the Asian Film Awards 2008, and winner of Best Screenplay at the 27th Hong Kong Film Awards 2008, Mad Detective has been simultaneously thrilling multiplexes and cerebrally challenging arthouses in the UK and across the world – The Masters of Cinema Series is proud to present the UK DVD debut and also our first ever Blu-ray.