﻿ Me and You and Everyone We Know Details :: Criterion Forum
The Criterion Collection

Me and You and Everyone We Know 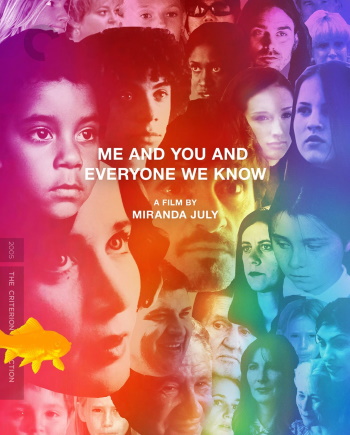 Directed by: Miranda July
Featuring: John Hawkes, Miranda July, Miles Thompson, Brandon Ratcliff, Carlie Westerman, Hector Elias, Brad William Henke, Natasha Slayton, Najarra Townsend, Tracy Wright, JoNell Kennedy, Ellen Geer, Colette Kilroy, James Kayton, Amy French
With this compassionate, startling comedy that could have come from no other artistic sensibility, the brilliant Miranda July reveals a world both familiar and strange—an original vision of creativity, sexuality, childhood, and loneliness through a series of braided vignettes around a pair of potential lovers: Richard, a newly single shoe salesman and father of two (John Hawkes), and Christine, a lonely video artist and “Eldercab” driver (July). While they take hesitant steps toward romance, Richard’s sons follow their own curiosity toward their first sexual experiences, online and in real life, venturing into uncharted territories in their attempts to connect with others. Playful and profoundly transgressive, Me and You and Everyone We Know is a poetic look at the tortuous routes we take to intimacy in an isolating world, and the moments of magic and redemption that unite us.