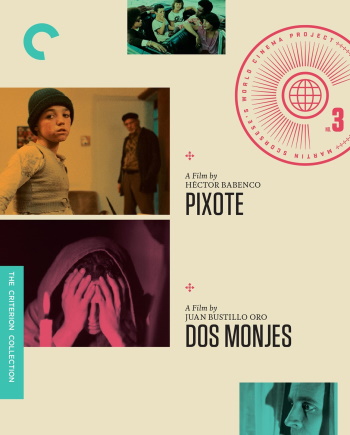 Packaging Review Discuss Compare
This title is only available in the box set Martin Scorsese’s World Cinema Project No. 3
Buy At:

With its bracing blend of harsh realism and aching humanity, Héctor Babenco offers an electrifying look at lost youth fighting to survive on the bottom rung of Brazilian society that helped put the country’s cinema on the international map. Shot with documentary-like immediacy on the streets of São Paulo and Rio de Janeiro, Pixote follows the eponymous preteen runaway (the heartbreaking Fernando Ramos da Silva) as he escapes a nightmarish juvenile detention center, only to descend into a life of increasingly violent crime even as he finds himself part of a makeshift family of fellow outcasts. Balancing its shocking brutality with moments of disarming tenderness, this stunning journey through Brazil’s underworld is an unforgettable cry from the lower depths that has influenced multiple generations of American filmmakers, including Spike Lee, Harmony Korine, and the Safdie brothers.

Made in the early days of Mexican sound cinema, this vividly stylized melodrama hinges on an audacious, ahead-of-its-time flashback structure. When the ailing monk Javier recognizes a brother newly arrived at his cloister, he inexplicably becomes deranged and attacks him. What causes his madness? Director Juan Bustillo Oro recounts the two men’s shared past—a tragic rivalry over the love of a woman—twice, once from the point of view of each, heightening the contrasts between their accounts with visual flourishes drawn from the language of German expressionism. With its gothic sets, elaborate lighting, and daring camera work by avant-garde photographer Agustín Jiménez, Dos monjes is a broodingly intense outlier in Mexican cinema, plumbing the depths of psychological torment and existential mystery with experimental verve.