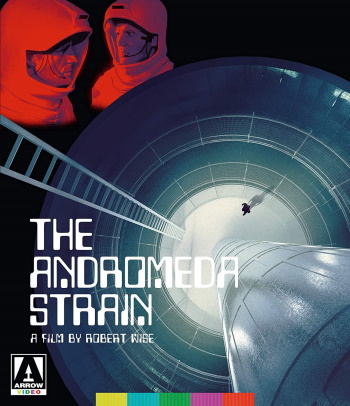 Before he created Westworld and Jurassic Park, Michael Crichton first blurred the line between science fiction and science fact with his breakout success The Andromeda Strain. Two years after the novel s publication, Robert Wise (The Haunting) directed the film adaptation, a nail-biting blend of clinically-realised docudrama and astonishing sci-fi visuals that ushered in a new subgenre: the killer virus biological thriller.

A government satellite crashes outside a small town in New Mexico and within minutes, every inhabitant of the town is dead, except for a crying baby and an elderly derelict.  The satellite and the two survivors are sent to Wildfire, a top-secret underground laboratory equipped with a nuclear self-destruct mechanism to prevent the spread of infection in case of an outbreak.  Realizing that the satellite brought back a lethal organism from another world, a team of government scientists race against the clock to understand the extraterrestrial virus codenamed Andromeda before it can wipe out all life on the planet.

Aided by innovative visual effects by Douglas Trumbull (2001: A Space Odyssey, Silent Running) and an unforgettable avant-garde electronic music score by Gil Melle (The Sentinel), Wise s suspense classic still haunts to this day, and is presented here in a stunning, exclusive new restoration from the original negative.