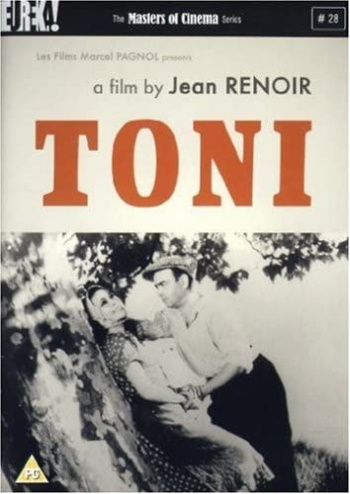 Based on a police dossier concerning a provincial crime of passion, it was lensed by Claude Renoir on location (unusually for the time) in the small town of Les Martigues where the actual events occurred. The use of directly-recorded sound, authentic patois, lack of make-up, a large ensemble cast of local citizens in supporting roles, and Renoir's steadfast desire to avoid melodrama lead to Toni often being labeled "the first 'neorealist' film". Renoir himself disagreed.

Although Toni is acknowledged as a masterly forerunner of neo-realist preoccupations and techniques he wrote: "I do not think that is quite correct. The Italian films are magnificent dramatic productions, whereas in Toni I was at pains to avoid the dramatic." Toni's story centres around an Italian immigrant, Antonio Canova (Charles Blavette), a labourer at a local quarry who has become entangled in relationships with his landlady (Jenny Helia) and with the young, hot-blooded Spaniard, Josefa (Celia Montalvan). As Josefa's life disintegrates through rape and a necessitous marriage to the brutish foreman Albert (Max Dalban), Toni is caught up in a series of marriages gone sour and the psychological fragility of those he cares for. Despite the exquisite location backgrounds the vineyards, rocky hilltops and verdant pathways surrounding the little village Renoir makes no attempt to impose, through picturesqueness, the placid power of this Provencal backwater.

Toni's direct style and theme (Luchino Visconti was assistant director) attained it classic status with the critics and directors of the French New Wave. Renoir's vision of realism approaches a purity sometimes found in documentary, whilst retaining the literary power and emotion of Balzac, Flaubert and Zola. The Masters of Cinema Series is proud to present Toni for the first time