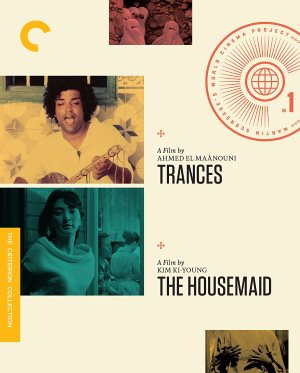 Packaging Review Discuss Compare
This title is only available in the box set Martin Scorsese’s World Cinema Project No. 1
Buy At:

The beloved Moroccan band Nass El Ghiwane is the dynamic subject of this captivating musical documentary. Storytellers through song, with connections to political theater, the band became an international sensation (Western music critics have often referred to them as “the Rolling Stones of North Africa”) thanks to their political lyrics and sublime, fully acoustic sound, which draws on the Moroccan trance music tradition. Both a concert movie and a free-form audiovisual experiment, Ahmed El Maânouni’s Trances is cinematic poetry.

A torrent of sexual obsession, revenge, and betrayal is unleashed under one roof in this venomous melodrama from South Korean master Kim Ki-young. Immensely popular in its home country when it was released, The Housemaid is the thrilling, at times jaw-dropping story of the devastating effect an unstable housemaid has on the domestic cocoon of a bourgeois, morally dubious music teacher, his devoted wife, and their precocious young children. Grim and taut yet perched on the border of the absurd, Kim’s film is an engrossing tale of class warfare and familial disintegration that has been hugely influential on the new generation of South Korean filmmakers.