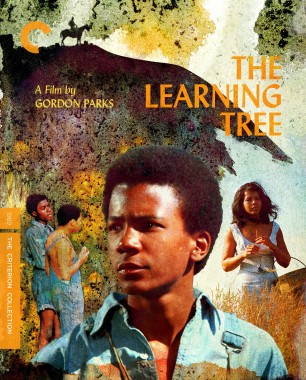 With this tender and clear-eyed coming-of-age odyssey, the renowned photographer turned filmmaker Gordon Parks not only became the first Black American director to make a Hollywood studio film, he also served as writer, producer, and composer, resulting in a deeply personal artistic achievement. Based on Parks's own semi-autobiographical novel, The Learning Tree follows the journey of Newt Winger (Kyle Johnson), a teenage descendant of Exodusters growing up in rural Kansas in the 1920s, as he experiences the bittersweet flowering of first love, finds his relationship with a close friend tested, and navigates the injustices embedded within a racist legal and educational system. Exquisitely capturing the bucolic splendor of its heartland setting, this landmark film tempers nostalgia with an incisive understanding of the harsh realities, hard-won lessons, and often wrenching moral choices that shape the road to self-determination of the young Black man at its center.

• New 2K digital restoration, with uncompressed monaural soundtrack on the Blu-ray
• New documentary on the making of the film, featuring artist and critic Ina Diane Archer, curator Rhea L. Combs, and filmmakers Ernest R. Dickerson and Nelson George
• New conversation, moderated by film scholar Michael B. Gillespie, between artist Hank Willis Thomas and art historian Deborah Willis about the influence of director Gordon Parks
• My Father: Gordon Parks (1969), a documentary made on the set of The Learning Tree, narrated by Gordon Parks Jr., and featuring interviews with Gordon Parks Sr. and members of the cast and crew
• Diary of a Harlem Family and The World of Piri Thomas, two 1968 films on which Parks played creative roles, with a new introduction by Combs
• Unstoppable (2005), a documentary featuring producer Warrington Hudlin in conversation with Parks and filmmakers Ossie Davis and Melvin Van Peebles
• Trailer
• English subtitles for the deaf and hard of hearing
• PLUS: "How It Feels to Be Black," a 1963 Life magazine photo-essay by Parks, and an excerpt from the director's 2005 book A Hungry Heart: A Memoir
Top

Or even, if we can dream, a complete historical set with stuff like Leadbelly. Still, can’t be upset with what we do have.
Top

Moments without Proper Names was just put out on blu-ray by Kino.

Moments without Proper Names was just put out on blu-ray by Kino.

Thanks. I guess Criterion lost the bidding, as they likely had The Learning Tree in the works for a while and this is a very recent Kino release. Still, a shame.
Top

I mean, this looks like a stacked release, and you can also buy the Kino, who will probably do just as good of a job with it. Other than it not being tacked on for no additional charge on the Criterion, I don't see the problem
Top


I'm still amazed that Leadbelly has aired recently on American television in HD. Seems like a potential Paramount Presents title, although maybe it's a touch too obscure.

I've heard the claim that this was the first studio film to be helmed by an African-American filmmaker, but Ossie Davis' Cotton Comes to Harlem, Melvin Van Peebles' Watermelon Man, and Bill Gunn's Stop were all in stages of production at roughly the same time.
Top

Based on Gordon Parks' novel of the same name, "The Learning Tree" is significant for being the first major studio feature length film directed by an African American director. Parks in his autobiography, "Voice in the Mirror" mentions that John Cassavettes upon reading the original novel urged him to adapt the film for the big screen and helped him secure a deal with MGM. Parks went on to direct the film, write the script and compose the film score. The result is an amazingly technically competent piece of filmmaking and even more astonishing knowing it came from a first time director.
Nowadays, for better or for worse, Gordon Parks tends to be solely remembered for helping popularize the blacksploitation craze with "Shaft" and its sequel, but this film really reflects his skills as a director. Parks' direction is excellent, letting the characters tell the story, using his skills a photographer to great effect, capturing the emotion of the people, while also easily adapting to more active filming in terms of exterior shots and landscapes. His debut score is pleasant, but nothing remarkable, while the whole film as a package feels a bit more sweeping than the short running time might let on.
The final product is an uneven but good movie. What really brings the film down is the overtly simple screenplay that comes off as rather pedestrian and Kyle Johnson's somewhat lacking/limited acting skills.
This is one of those films that is significant and should be seen more for what it represents. Having said that, it's still a worthwhile, noble and earnest effort from a director that unfortunately never got his due.
Top

I would say that, if anything, Gordon Parks nowadays is best remembered for his photography for the likes of Life, Vogue, and the FSA. A good number of his images were on display just this past summer at the Jewish Musuem in New York, part of a larger exhibit on mid-century magazine photography. Amongst photo historians and art historians more generally, it's his trailblazing career as an African-American photographer for mainstream magazines which is most focused on.
Top
Post Reply
9 posts • Page 1 of 1