Discuss DVDs and Blu-rays released by Criterion and the films on them. If it's got a spine number, it's in here. Threads may contain spoilers.
Post Reply
266 posts
Message
Author

The collector's edition is available for preorder
Top

I was rereading the thread and crossed this post. Did you rewatch? Has your opinion of Playtime changed one way or the other?


Mr Sausage wrote: ↑
Tue Dec 09, 2014 12:17 am
I found Playtime exhausting the first time I watched it. After about an hour I couldn't wait for it to be over just so that my eyes could get some relief. It seems like a film I'd like better in short bursts. At full length, it's all a bit much. I'll revisit it and see if my opinion has changed, but I'm not looking forward to it. Much more excited for Mon Oncle, which I haven't seen since highschool. Also it always reminds of me of the title of that Wallace Stevens poem, Le Monocle de Mon Oncle.

My second viewing was more pleasurable, maybe because knowing what was coming removed some of the cognitive load. I still think it's all a bit too much, but it's no longer so exhausting. My wife loved it unreservedly, tho'. I introduced her to Tati with Holiday, Mon Oncle, and Playtime from this set, and she loved each one more than the last. Playtime didn't seem to exhaust her, so perhaps she has more of a sense of how best to watch it.
Top

I found the opposite to be true for me. I loved Playtime when I first saw it on the big screen & so I picked it up when Criterion released it on dvd. I then upgraded to blu-Ray, then the box. I have found that it’s not as enjoyable at home & only watch bits & pieces now & then, but not the whole thing. It really seems to me That movies that are more of a visual experience require your undivided attention, which a theater experience forces on you (not to mention that a larger screen heightens the sense of immersion). Other films I have found this to be true for: Koyaanisqatsi, Metropolis, Apocalypse Now, 2001, A Space Odyssey & many others that don’t have a traditional narrative structure & rely heavily on the visual composition to convey things.
Top

alisoncastle wrote: ↑
Fri Sep 27, 2019 12:47 pm
Hi Tati fans. It took a lot longer than we expected (7 years!) but the TASCHEN book set will finally be released this November.

The price just dropped by 100 $ on Amazon Canada, which means it is less expensive than on the US site. I have no idea how long that price will last or if it will drop even further.

It is now supposed to be released in December.
Top

Did anyone that ordered the Tati book set from amazon get their copy? I pre-ordered it back in August but it's been "Temporarily out of stock" since the release date.
Top

beerme wrote: ↑
Fri Jan 03, 2020 1:37 pm
Did anyone that ordered the Tati book set from amazon get their copy? I pre-ordered it back in August but it's been "Temporarily out of stock" since the release date.

Nope. I had the pre-order in for ages but cancelled it after waiting for so long and bought it from Half Price Books instead. Worked out to be cheaper than Amazon's original price anyway, and I should have it Monday. (I'll post some pictures then for the curious.)
Top

Thank you for posting this. I ordered the set after I saw it and I got the set this past Monday. It came pretty well-packaged and in holiday gift wrapping too. I can post some pics tomorrow if anyone is interested.
Top

Use code DEAL27 at HPB.com to get 27% off one item. This brings the Taschen Tati book down to $115, shipped. Coupon is good through Jan.7.
Top

Thanks so much for the tip, schlafen! I've been eyeing this ever since it was announced but the sticker price was just too hard to justify. For $115 shipped I finally bit.
Top

Learning this about Tati's grandmother might be worth the cost of the book: 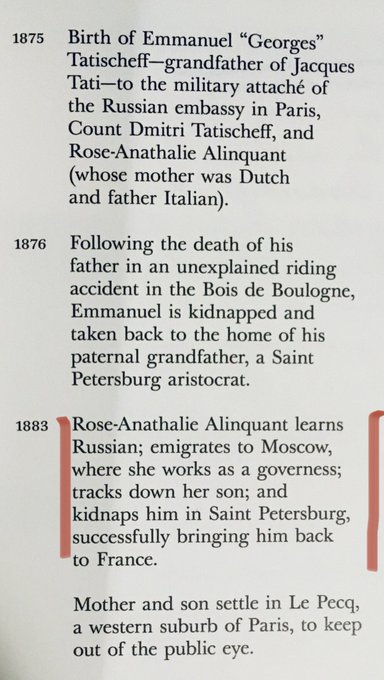 Jesus! that would make a good film—maybe by Ophuls?

I'd be curious to know what folks who have spent some time with the Taschen collection think of it. I browsed a store copy in NY over Thanksgiving and I was a little underwhelmed. I saw a lot of production stills and ephemera but didn't see a lot of substance that would be keep me engaged for a long time. But I could have misjudged—I only spent about 10 minutes with the thing.
Top

My goodness! It's like I am destined to never receive the Taschen box. I had, like many of you, preordered from Amazon but they never seemed to receive any stock so I canceled that order and took the excellent advice and coupon code above to order from HalfPriceBooks. That order went through without a hitch but now my box is floating in the most infuriating tracking circle of all time:

I received a shipment notification when my label/tracking number was created, but the item wasn't dropped at a post office until 9 days later when it was scanned at the Southern Maryland Distribution Center. It sat there for 3 days before departing and heading to a couple of different post office locations both in Bowie, MD (I live in SC). Then 3 days later, it returned to the Southern Maryland Distribution Center. The next day, it made progress to the Washington DC Distribution Center where it sat for one day before moving to the (no it can't be!) SOUTHERN MARYLAND DISTRIBUTION CENTER. It feels like one of those gags in an old sitcom where a character is struggling to get through some bureaucratic red tape in some unfamiliar small town and two offices keep bucking the responsibility back and forth between each other. Seriously, I know this isn't a shipping complaints thread but does anyone have any similar experience or perhaps advice for someone to call to see that the package actually makes forward progress? Here I am 19 days after shipment notification and still no books.

In the meantime, I ordered what appears to be a pretty new release: Play Time: Jacques Tati and Comedic Modernism by Malcolm Turvey. It is so far a very engaging read that is focused solely on dissecting the comedy in Tati's films (not just PlayTime despite the title) and is helping me to finally find some of those long fabled simultaneous gags in PlayTime whose existence I had always thought wildly exaggerated. There's a pull quote on the back from Jonathan Rosenbaum calling it the best book length study on Tati he has ever read which seems like pretty high praise.
Top

Turvey's book is the best thing I've read on Tati, although it won't satisfy those looking for production histories much less biography -- it's a very focused analysis of the gags in Tati's films and the ideas about humor, spectatorship, and modernity they embody or seek to invoke. One thing I especially like about it is that it takes those ideas seriously, even if it suspends judgment on whether Tati is "right" about audiences, modern architecture, etc. David Bordwell and Kristin Thompson have written some of the more insightful things about Tati's films, which Turvey borrows from, but one thing I don't like about their analyses is the notion that Tati's ideas are wafer-thin and really just a pretext for his play with form (this is the whole idea of "parametric" cinema that Turvey critiques). That always seemed to me to be a false dichotomy, and Turvey bridges close analysis of the films' formal innovations and an attempt to understand what Tati hoped to achieve through them. I ended up re-watching all of Tati's features while reading the book and saw them with a refreshed understanding and appreciation... (Like the previous poster noted, it also alerted me to the existence of dozens of gags in the films I had previously missed!)
Top

Not sure if this belongs here on in one of the books threads, but today I learned that Monsieur Hulot's Holiday of all films received a fairly elaborate literary adaptation in 1959 written by a 28-year-old Jean-Claude Carrière and illustrated by Pierre Etaix
Top
Post Reply
266 posts