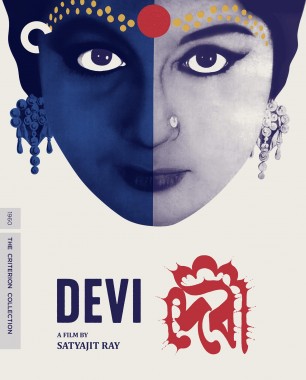 Master filmmaker Satyajit Ray explores the conflict between fanaticism and free will in Devi (The Goddess), issuing a subversively modern challenge to religious orthodoxy and patriarchal power structures. In the waning days of mid-nineteenth-century India's feudal system, after his son (Soumitra Chatterjee) leaves for Kolkata to complete his studies, a wealthy rural landowner (Chhabi Biswas) is seized by the notion that his beloved daughter-in-law (a hauntingly sad-eyed Sharmila Tagore) is the reincarnation of the goddess Kali—a delusion that proves devastating to the young woman and those around her. The opulently stylized compositions and the chiaroscuro lighting by cinematographer Subrata Mitra heighten the entrancing expressionistic intensity of this domestic tragedy, making for an experience that is both sublime and shattering.

I got tired of waiting for this announcement, so last month I rewatched my crappy import DVD. Ah well, it'll be a joy to see it again anyway. One of my favorites by my favorite director.
Top

Fabulous! Certainly one of the most anticipated CC releases this year. I only hope that they'll also make it a Criterion UK release!

Since a poor standard definition transfer has been the only one to appear on the Criterion Channel since its debut (still there last month when the Channel showcased Ray's work to commemorate his centenary), it will be nice to have an improved HD version. Judging from the clip on Criterion's site, the restoration appears to be based on a fairly ragged print with not-so-great contrast, but it's better than what's been available before. The stills on the site tend to look better, so perhaps the clip represents a compromised source used for only a portion of the restoration.
Top

Very excited for this. I have the Indian dvd of the film, but the quality always kept me from watching it. That quality didn't stop me from watching Days and Nights in the Forest, but, well, anyway, I'm looking forward to seeing it with some visual and auditory improvement.
Top

I can attest that the entire film does look amazingly good, even though only 16 minutes of the original camera negative could be used for the restoration. In fact, the clip excerpted on the Criterion site represents the image quality at its weakest and it even appears that additional clean-up was done since that clip was uploaded.

This is a dynamic Ray film and I'm so pleased to have a high quality version to view.
Top
Post Reply
9 posts • Page 1 of 1