821 Dr. Strangelove, or: How I Learned to Stop Worrying and Love the Bomb

Discuss DVDs and Blu-rays released by Criterion and the films on them. If it's got a spine number, it's in here. Threads may contain spoilers.
Post Reply
108 posts
Message
Author

djproject wrote:Apparently there was a lot more expository dialogue and "bigger picture" scenes about its main topic.

You should check out the early draft of the script, written by Kubrick and Peter George before Southern came aboard. I know dialogue can be a lot punchier in the hands of actors than it looks on the page (and Strangelove's dialogue in particular needs Peter Sellers' voice), but geez, it just goes on and on. The Ambassador's explanation of the Doomsday Machine reads like someone presenting a paper at a conference.

To use a line from The Commitments: "And it's a start. I believe in starts. Once you have it, the rest is inevitable." The first draft definitely lays the groundwork for it. And it was a good thing that Stanley was one to go for the better option =D.

It also reminds me of how my father could imagine the way Kubrick worked where he would "prune" his films and it does help to have more to start and to trim. (This is why I think A.I., admirable as it was, didn't really work as I felt it was Spielberg trying to showcase everything Stanley did whereas he should have picked elements he liked and called it his own.)
Top

Blu-ray.com giving this a perfect score for video despite it only getting 4/5 for the same transfer seven years ago. Guess that very slightly better monochrome scheme makes a big difference?


I think that it is rather odd that so many people like Dr. Strangelove or: How I learned to Stop Worrying and Love the Bomb because it is a great comedy. I never thought that it was a particularly funny film.

I don't think it's funny either, not sure that's all that controversial
Top

There actually isnt a better monochrome, it was just another case of crappy Beaver caps.
As for the movie, I do find it quite funny.
Top

The phone call alone is hysterical - Peter Sellers is funny throughout the whole film even though two of his three roles are basically straight men compared to the other loonies in the movie.
Top

It reminds me of what my father said about it once: it's funny because its true.
Top

If droll absurdities rolled out in perfectly-timed dead-pan line deliveries is your thing (it's mine), then Dr. Strangelove is the funniest film ever made. That it can be frightening as well is a bonus.
Top

I imagine more people like this film than don't, and of those almost all probably find it funny-- I didn't mean to inspire a roll call! I was merely pointing out that on a subjective matter like finding a movie funny (or not), it doesn't really hold to use that criticism as a point of ridicule, which was my impression from the post
Top

Never even heard of it, but that cast makes it look like an international production that sat on the shelf for a decade! I don't find Sellers funny at all, really, even in films I like, such as the World of Henry Orient, so I'm sure that's a big part of it as well
Top

That point was missed when the review was originally posted here. Pro-B doesn't think the film fails as a comedy (like domino), rather, he doesn't even see it as a comedy. Note the full quote concluding his review:

I think that it is rather odd that so many people like Dr. Strangelove or: How I learned to Stop Worrying and Love the Bomb because it is a great comedy. I never thought that it was a particularly funny film. I think that it works because the fear and paranoia that permeate it are effectively used to deliver some very serious warnings.

One wonders how he would react to Fail-Safe.
Top

Yes, it's clear the quote in Ribs' post was out of context, though I object to any film reviewer calling a movie "dated" far more than his larger point about it being 2 spooky 4 him 2 laff
Top

He actually says that it should feel dated (because it revels in a very specific political climate) but doesn't.

Dr. Strangelove comes from a different era, but I don't think that it feels dated. It is a very, very relevant reminder that as long as there are powerful ideological rivals the threat of nuclear holocaust remains.

Wow, how did I completely misread that? Mea culpa
Top

Re: Dr. Strangelove on DVD and Blu-ray

Re: Dr. Strangelove on DVD and Blu-ray

This is included on the Criterion release as "Exhibition Trailer" - the most surprising extra and a real delight. I love how Kubrick feels the need to repeatedly emphasize that there will be more coverage of the action in the finished edit. Since the takes shown are mostly masters (and not always the takes used in the finished film), you get a real sense of how the final edit sharpened the comedy and pacing. Perhaps the most interesting moment is when Sellers as Mandrake explains that there is "nothing wrong" with his bodily fluids as he pulls his lower eyelids down for General Ripper to see the whites of his eyes. In the final edit, Kubrick chose to stay on a close-up of Sterling Hayden during all of this, so Sellers' actions were never seen.
Top

This "demonstration reel", as Kubrick calls it at the end of his narration seems like it would be a big selling point for the criterion issue. But most reviews just mention it in passing. I don't think they realize what it is.
Top

Found some more detail about the Dr. Strangelove restoration, which was done without the OCN:
"...the original negative was lost to overprinting and carelessness in the Sixties. Forced to make negatives from two fine-grain master positives, the notoriously exacting Kubrick could never get the film to look the way he wanted it to, particularly in terms of contrast and density. The DCP was made from the one surviving master positive struck from the negative which Kubrick used to make all official prints; Crisp and his team worked with Leon Vitali, Kubrick’s primary assistant for over 25 years."
Top

Yes, the (small) booklet explains that the OCN has been destroyed since it was rendered pretty much useless. Here is what is printed in the booklet :

"Because of overprinting and damage created at the time of its theatrical release, the OCN of Dr. Strangelove was destroyed at the laboratory fifty years ago. As a result, a combination of elements, including 35mm fine-grain master positives, duplicate negatives, and prints, were used for this digital transfer, which was created in 4K resolution on an Oxberry wet-gate film scanner at Cineric in New York in 2004. Given the condition of the many elements; the fact that they represented different manufacturing generations from the original camera negative, resulting in wide variations in density and contrast; and the need to maintain the filmmakers' aesthetic intentions, it was determined that the only way to restore the film properly was in a full 4K digital space. Daniel DeVincent, Cineric's director of digital restoration, created lookup tables designed to optimize the scanner for each element and achieve the dynamic range of 35mm film. Under the supervision of Grover Crisp, initial color correction was carried out by DeVincent, with additional color correction done by Scott Ostrowsky at Technicolor and Colorwors in Los Angeles."
Top

Criterion goofed on the images accompanying the interview with scholar Rodney Hill. I don't have the means to take screen captures off the blu ray but at one point there's a shot of an image of Freud and Jung with four other analysts. They label these two as Freud (left) and Jung (right): 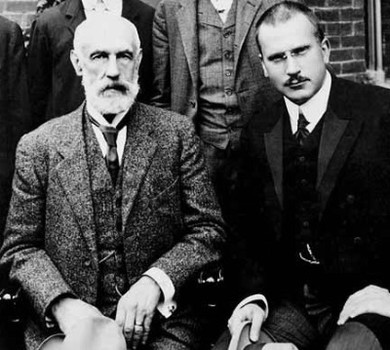 But Freud is actually the guy on the bottom left of the full picture (I don't know who the middle guy is):

Google is showing that a lot of websites have made this mistake but I'm surprised that Criterion wouldn't catch this given how Freud is easily recognizable.
Top

No fans of A Dangerous Method on staff, I suppose. (Viggo didn't shave himself bald.)
Top

Rayon Vert wrote:Criterion goofed on the images accompanying the interview with scholar Rodney Hill. I don't have the means to take screen captures off the blu ray but at one point there's a shot of an image of Freud and Jung with four other analysts. They label these two as Freud (left) and Jung (right):

This was taken at Clark University in Worcester, MA (my alma mater) in 1909, during Freud's only visit to the United States upon G. Stanley Hall's invitation. From left (front): Sigmund Freud, G. Stanley Hall, Carl Jung; (back): Abraham A. Brill, Ernest Jones, and Sandor Ferenczi.
Top

It brings a whole new meaning to a Freudian slip!
Top

Oliver Stone screened this for Vladimir Putin, while filming the upcoming Showtime doc of his visit.
Top
Post Reply
108 posts