Discuss DVDs and Blu-rays released by Eureka/Masters of Cinema and the films on them. If it's got a spine number, it's in here.
Forum rules
Please do not clutter up the threads for MoC titles with information on pre-orders. You can announce the availability of pre-orders in the MoC: Cheapest Prices / Best Places to Buy / Pre-Orders thread. Any posts on pre-orders in any other thread will be deleted.
Post Reply
50 posts
Message
Author 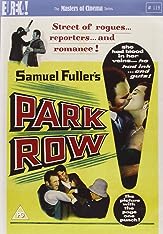 Iconic American filmmaker Samuel Fuller began his career as a tabloid reporter, and thrillingly drew on those skills and experiences in his extraordinary labour-of-love Park Row. An exhilarating tribute to the ideals of the free press and noble popular journalism, this two-fisted tale of battles on and off the printed page in New York in 1880s New York is a major American rediscovery.

When Phineas Mitchell (Gene Evans), a visionary newspaperman, launches his own title The Globe, his eye-catching headlines and approach quickly catch fire with the New York readership. But less impressed is Charity Hackett (Mary Welch), proprietor of long-established rival The Star, and attempts to undercut The Globe soon escalate into all-out war.

Packing more dynamite into eight reels than most directors unleash over a career, Fuller's self-financed Park Row is a passionate, idiosyncratic work of gritty myth-making. The Masters of Cinema Series is proud to present Park Row for the first time for home viewing in the UK.

Indeed. Of course it would happen after I've already descended into "MOD hell." I assume this is not MGM property in the UK?
Top

Great, great film but I too have already fished this particular treasure out of the MoD swamp. But no doubt I'll grab the MoC as well if they can manage even the barest of extras.
Top

Isn't the PQ of the MOD R1 disc not so hot? Also, should I have abbreviated more phrases in that sentence?
Top

I prefer it when Fuller completely lost his mind, but this film is still really great with just enough touches of the bizarre. The scene were they decide to set up shop alone is worth picking this up for.
Top

Here goes another body part to Craig if he can be persuaded to do this in BluRay.
Top

An HD master doesn't exist. Situations like this are usually that thirdparties can "pay 100% to have the HD master made, and then hand it over." -- Sales projections for a title like this never justify such extravagance. It's a 10-1 ratio, very unlikely to happen unless deep-pocketed fans can be found. My opinion: "Blame the film's owner for not doing what most other majors are now doing as a matter of course".
Top

I haven't been this excited for a non-Blu-ray since Treasures V was announced this year.
Top

peerpee wrote:An HD master doesn't exist. Situations like this are usually that thirdparties can "pay 100% to have the HD master made, and then hand it over." -- Sales projections for a title like this never justify such extravagance. It's a 10-1 ratio, very unlikely to happen unless deep-pocketed fans can be found. My opinion: "Blame the film's owner for not doing what most other majors are now doing as a matter of course".

That sucks. I can see why MGM hasn't made an HD master - though his stock in America has risen a bit in the last few decades, he's still not as revered as, say, Howard Hawks or Billy Wilder. I still get the impression that the UK and Europe pay him a lot more respect, and even though Park Row is arguably his best work (for me, it's between that and Steel Helmet), it's not a well-known, much less beloved, film in the U.S. outside of Fuller-loving cinephiles. (I thought I was a film buff, and I didn't even know about it until Rosenbaum mentioned it in his response to the AFI 100.) Leaving it out-of-circulation for so long definitely maintained that neglect.

Doesn't justify the lack of an HD master, but for a company that's very tight, I can see why it was passed over for one.

Regardless, I will be buying this. I'm glad this was announced, I pretty much gave up on a decent DVD release and was planning to buy the MOD one of these days.
Top

Love this film. Thank you, MOC. I've come so close to picking up the MOD lately.
Top

Full details on this bad mother are up on the website, and are as follows.

Short of a commentary or a second feature, that's about as much as one could hope for, I think. Though I was prepared to buy this at 'pressed disc'.
Top

This is possibly a stupid question and when I get a response a likely facepalm will follow, but what exactly is the purpose of including a "music and effects" track? I know MoC did that with Ruggles, but I'm damned if I can figure out why i would want to sit through the entire film again with just the music and sound effects.
Top

The impression I always got was that the music and effects track was included for soundtrack junkies. As you might have noticed, Twilight Time seems to often include an isolated music and effects track with their releases, I believe since co-founder Nick Redman worked for years as a soundtrack producer. I could be wrong, though, and I'm sure someone else here can give a better answer.
Top

I'm in the same boat as triodelover, but it's probably something that the studio already had on the shelf and thus could be included at little or no cost to MoC. If you're a student of 50s film music, it'd be of use, I guess, and I can imagine making use of this kind of track if it were a film whose score I particularly admired / enjoyed - Anatomy of a Murder, say.
Top

I've known people to use them in classes, but that's it.
Top

It's nice to have for sampling purposes if you are, for instance, a rapper.
Top

Homework’s whack
and so are rules!
Tucking in your shirt’s for fools!
Top

They're often squirrelled away on the HD masters (which have many audio tracks for such things). Footage used for credit sequences it also sometimes at the end of HD masters, looking astonishing, and without any text overlays. MoC were very pleased to be able to use the textless opening sequence of SILENT RUNNING for the Blu-ray motion menu (which looks amazing, I think).

If the M&E tracks are given to you, why not put it on the disc for posterity too? That was our thinking. I now find it annoying when studios don't do it, because of "music licensing issues" or some such bullshit excuse for laziness.
Top

Don't get me wrong, Nick. I wasn't complaining, just a bit baffled. I suppose if you had the script you could treat it like those classical recordings from the '50s of something like a Mozart piano concerto that included everything but the piano part, so the budding virtuoso/prodigy/idiot savant could play along at home. Might make an interesting parlor game, or am I showing my age again?

Movie karaoke - just turn on the HoH subs and put on your best Gene Evans.
Top

That's actually a real fun party game. I've found Breathless works really well though anything with too much dialogue is basically impossible after the first round of drinks.
Top
Post Reply
50 posts