An ongoing survey of the Criterion Forum membership to create lists of the best films of each decade and genre.
Post Reply
209 posts
Message
Author

EDIT: Party cut?? What the fuck, Chicagoeans, explain yourself

The party cut is so ubiquitous in the Chicago suburbs that I had no idea it was weird until I moved out of state and never, ever saw it again. Somehow, the fact that I had never seen it portrayed in a movie or on TV never occurred to me. It also seems strange to me, though, that the author of that pizza book claims Chicagoans don't actually order deep dish pizza. It's certainly not an everyday thing (it's way too filling) but it's definitely not just a tourist thing, either. In my family it was like a meal for special occasions like graduations or little league baseball victories.
Top

Some pizza parlors (do people still say that?) in Texas offer the party cut too.
Top

There's a chain here, Ledo, that does square cuts, but the pizzas are rectangular, so it makes sense
Top

Square cuts are called party cuts? Weird, I remember Pizza Hut or some other chain offering that in PA.
Top

Yeah, pizza hut did party cuts here in Canada, too (or at least southwestern Ontario). I only ever saw them at birthdays.
Top

Donato's, which I think is based in Ohio (at least, that's where I've seen them), cuts all their pizza like that (though I've never heard it called a "party cut"). I kinda like it, since it essentially makes pizza bite size. Of course, it only really works with thin crust pizza which is already an abomination in and of itself so who cares how you cut it.
Top 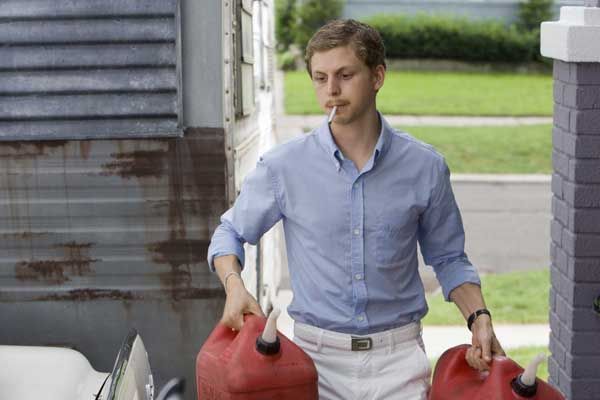 I'm surprised that this wasn't even an orphan in this project, as a revisit only confirmed the eccentric genius I recalled about this underappreciated gem from my first viewing ten years back. This film understands the developmentally-appropriate egocentricity of youth, as well as the self-absorption that inebriates the mind when one is emotionally enveloped in a state of love, so well that it weaponizes the overwhelming obsession against the systems of power that suppress its actualization. The fantasy of supreme agency in attaining one's love (or, at this stage of life, one's "everything") is realised in the the only way a self-conscious normal teenager can.. by compartmentalizing his personality to create an alter-ego that can be bad for him while he maintains his inhibited identity. The externalization of this socially-inappropriate impetus is a blend of id-run-riot and calculated anarchism; that is, Michael Cera's other half may be a sociopath, but he's the incarnation of the powerless teenager's wish fulfillment. The film understands that the only way kids know how to visualize their ideal lives is to dream or venture to extremes, in doing the opposite of what 'feels right' or what 'society condones' because the polarized version of what I'm doing has to give me what I'm not getting, right?

The film is dark because of the implications of its physical events, but even moreso because there's a sick truth and relatability to the mental processes that act as antecedents to the harm. Scenes like the college seduction that takes place after "no" has already been uttered and clarified will challenge audiences of today to wrestle with that grey area of assertiveness in sexual power dynamics, or persisting in doing one's best to express their affection, versus the non-coercive route of operating submissively yet safely and conscientiously in sexual politics. The film dances (or rather, jarringly wavers) on that line, acknowledging the unsettling truths that are problematic and affirming simultaneously, pertaining to our drives that are often at odds with one another. We need to tame and contain, but also recognize and release, these parts of us- but the lack of a safe blueprint coaligns with our inability to even sit with our direct thoughts, which forces repression rather than confrontation. Cera's evil side has a few lessons to teach, but if one can't -and isn't supported in navigating their inner needs, then you wind up doing some pretty fucked up shit.

The last act's fight between Cera and his father harshly prompts him with the opportunity to "grow up" but the reaction to fight, flee, and continue to hold on to his will power to take the opportunity to "grow up" on his own terms, is absurdly demented and existentially poignant. This film remembers what it's like to be in that awkward stage of emerging adulthood where you're still treated like a kid, because you are, but also have the passion that demands life beat to your drum; where the confusion, anger, and sadness that come with that in-between stage have no space to securely erupt. So here is an authentically deranged vision of a place where that entire mess can be validated, without endorsing all of its pieces, certainly not by themselves.
Top

The Goonies is one of those movies that I always liked as a kid but wasn’t a distinguishable favorite, yet it’s skyrocketed in enjoyment and respect in adulthood. Oddly as I get older I love it more, and having already rekindled my immense appreciation in my 20s, this latest revisit served as the perfect nostalgia elixir; not from my personal experience with the film, but for the spirit of adventure and youthful wish-fulfillment of succeeding on a quest with unsupervised independence. This film literally actualizes all childhood fantasies, from the central treasure plot to besting evil grownups to getting away with outsmarting random or familiar adults of all shapes and sizes.

The latter point comes about sporadically especially in the first act, with Feldman’s (not-PG) perverted Spanish translations and a glue job on a mini statue of David stacking unbelievably raunchy gags together, before overpowering the older jock brother! The film is beyond funny, with even the adults’ ignorances earning big laughs (“can’t you learn to exercise like a normal kid?”). I could go on and on, but it’d just be one long rendition of everything that happens here. Who’d have thought that this movie in particular, that’s intrinsically dependent on a childlike imagination to work, would be the one to ripen so fully with age.
Top

Clueless is many things: funny, intuitive, visually clever and skilled at enveloping audiences in its many spaces. It’s a definitive 90s work, subverting ‘chick flick’ cliches by embracing the very superficialities in narrative structure and production design that the characters do in their cosmetic pleasures, without a condescending attitude that might dub them shallow, and through the same deserved confidence the leads imbue into their milieu. This is a world where it’s good to be popular because it provides opportunities to live fully, develop, and self-actualize, with the kind of flexibility that is derived from a foundation of comfortability.

On my nth revisit, I was further impressed by just how secure the film is in its fairly simplistic stance on altruism, which fits right into the light tone branded onto realist topics. Cher’s ‘good deeds’, from using people as projects to helping with charity work at the end, are all undeniably rooted in selfish gains. The growth occurs in subtle ways (movement from the teacher-pairing to cheat grades, to a social-mobility makeover stemming from boredom, to a small gesture to help her teacher with a charity drive without an audience of peers to gratify her) yet they all serve the same purpose: making Cher feel better.

Feeling good is not shamed, and the whole depth of psychological intent doesn’t matter. What matters is that Cher does these things, and actually commits actions with the intent of bettering others, as well as herself. The argument of counting ‘why’s and weighing them against each other takes time away from ‘doing’, and the film dares to scoff at the philosophy of debating ‘true altruism’ with its own authenticity that’s too busy living and supplying the world with actual net good while those that judge the Chers of the world with an air of superiority fail to get out of their own way and do the same. Sometimes a hypothesis that allows two seemingly paradoxical truths to be mutually exclusive is the shortest and easiest path to personal happiness and human decency.
Top
Post Reply
209 posts

Return to “The Lists Project”