Rayon Vert wrote: ↑
Tue Apr 14, 2020 9:32 am
Is it possible also that sometimes Quebec did its own dubs in Québécois French? This one sounds like it.

It's possible this was dubbed done by a distributor of an unofficial compilation videos; some examples of such dubs are here, though unlike Hare Tonic these are from public-domain cartoons. (Also, the Hare Tonic dub sounds much more professional despite its problems.) This thread on a fan project to restore the original French-dubbed versions says the same thing happened in France. The thread also has lots of information on the older official dubs, including some of the changes made along the way (like the various actors who dubbed Elmer, and Speedy being renamed "Presto Gonzales" before reverting to his English name a few episodes later*) and the fact that some shorts were dubbed twice even before the redubbings of the late '90s.

*Something similar happened with Pepé Le Pew, who was called "Henry" in the original French dub of Odor-able Kitty but renamed "Pépé le putois" (Pépé the Polecat) for his later cartoons.
Top

Never heard these dubs before! No doubt they were circulating before my time though. All I ever heard was Guy Piérauld's original Bugs Bunny, but I watched them on television and what I'm sure were official VHS. Maybe a reason that it stayed here is that the new dub make use of french slang ("tronche de cake") that isn't used here.

The Instagram Live event first posted about on the previous page is now available with English subtitles on the host's Vimeo page!
Top

Fantastic. Really good of ÉCAL to go and sub the whole thing too. Watched it live and my high school French wasn’t catching much of anything, so I was mostly just reading the non-stop scroll of viewers’ comments: French comments about how much and how sweetly the old guy was smiling, English and Spanish requests/demands for live translation, more than a few Chinese comments about “cute grandpa”. Adieu au langage and all the langage, non-stop heart reaction emojis. It’ll be good to watch and listen through this properly – thanks for sharing!
Top

I‘am not sure if this is „old“ footage for Godardians here, but i have not seen this in its entity before:
https://cinematheque.tube/videos/watch/ ... &start=26s
Top

Sorry to bump this thread, but I'm looking for a Godard quote that I believe I've seen on this forum. It was a remark he made about with the advent of home video, people will stop 'watching' movies and only be collecting them. Does anyone have that quote handy? I'd like to save it somewhere as it comes across my mind all the time. Thank you!
Top

Drucker wrote: ↑
Mon Jul 20, 2020 8:15 am
Sorry to bump this thread, but I'm looking for a Godard quote that I believe I've seen on this forum. It was a remark he made about with the advent of home video, people will stop 'watching' movies and only be collecting them. Does anyone have that quote handy? I'd like to save it somewhere as it comes across my mind all the time. Thank you!

It’s from his segment in Wenders’ Chambre 666, though I don’t have the exact quote on hand. It’s something to the effect that he loves the VCR because now he can tape movies off TV, put them on a shelf, and never have to think about them again
Top

His segment is 10+ minutes (He keeps looking at his watch to time the film reel perfectly), so unfortunately that’s not an excerpt that contains the quote in question
Top

This is why I shouldn't be allowed to help.
Top

Thank you both!
Top 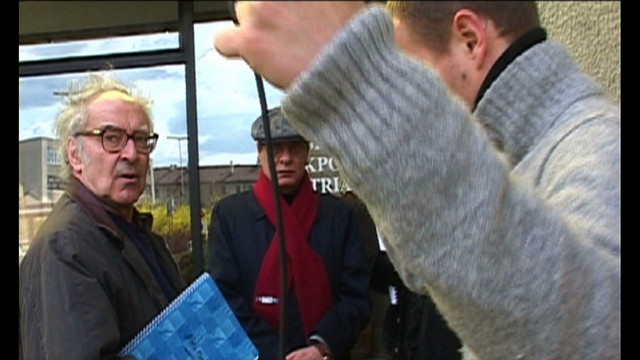 Making one's way through Godard's varied buried essays and shorts is a project with very inconsistent results, even for someone who considers him to be the greatest living filmmaker. However, I never expected that of all the scattered files, his two 'series' of Closed Jeans commercials (lumped with the later Metamorphojeans, which is still good but nowhere near the quality of the first two) would be the best of the bunch. These are not only the funniest commercials I've ever seen, but maybe the most tonally-distinct hysterical work Godard has ever done. It's pure satire as one would expect from the Maoist executing a service towards capitalist goods, and oh what an execution it is! The first commercial begins with blathering, frantic dialogue edited so crassly over the images that the flashing pattern effect should require epileptic warnings by law. This self-parody could not be more obvious or perverse, and just when you think it's over with twenty seconds left to go he dog-ears an uproarious assaultive fit about trousers that would be laugh-out-loud funny from the vocal-chord change alone, but the obsessive-compulsive mania he exudes surrounding the specific garment one-ups his own already-established baseline of absurdist irreverence. The second part plays out as a Pierrot le Fou-type clip of a couple on a beach in the midst of some life-threatening/life-affirming 'action' platforming clothes as the signifiers of utmost meaning ("Fashion has been fighting eternity for eternities"). This clip is even more clever in how he exaggerates the drama over a fragment of would-be narrative, and includes one of the greatest serious lines in literature from Journal d'un curé de campagne to seal the deal on the relentless vibe of contemptuous gags. This is Godard at his silliest, going for broke in ways that shouldn't surprise someone who already finds him funny, but still managed to anyways.
Top

Per Fabrice Aragno's Facebook page, Godard is apparently at work on a new project and it's to be shot (at least partly) on 35mm. Specifically, his post references a new film project "by you-know-who" and he's asking around about a fast 50mm lens in PL-mount form to fit an Arriflex 235 film camera, as well as accessories.
Top

Domino can you indulge me with your top ten Godard list if that's at all possible? If Le Petit Soldat is not on your list where does it stand?
Top

I made this a few years ago for the New Wave List, though it only covers the first part of his career:

dda1996a wrote:Domino have you ever compiled a complete ranking of Godard? I'd be curious to see it

I've since seen L'amore and would rate it between La Gai savoir and La Paresse, and Caméra-oeil, which is probably somewhere around that level
Top

Have you been steadfast on this order as time has gone? And thanks!!!
Top

Nah, though few have changed in any dramatic way (perhaps my esteem for Bande a part has lowered slightly and Le mepris has def risen as I've gotten older). Though as of right now I've swung back around for the fiftieth time to preferring Pierrot le fou over A bout de souffle, though it's usually one of these two duking it out for top spot! And Montparnasse-Levallois will always be his worst work of this first period
Top

I’m surprised you don’t have the top ten from the summer of Jean.
Top

The doc with my ballot got lost with my laptop crash last fall!
Top

The terrors of the before Letterboxd times.
Top
Post Reply
1103 posts