He announced pre-production on his next film today on Letterboxd.
Top

Excellent news, I also got a kick out of his brazen joke right before the announcement
Top

Link for anyone else who had trouble figuring out where someone would "announce" something like that on Letterboxd, which is apparently in a 1-star review of his own film:

I just wanted to inform those who care that I'm deep in development on my next film. So I'll only be logging for the time being. Not adding any info or replying to comments. But thank you for following me on this platform. It's been fun to connect with fellow film lovers. I'll be back as soon as I can.

Support the theaters when they open! Stay safe!

And no.. I didn't really watch it.

Specifically a one-star review for The Florida Project. The context is important for the opening remark.
Top

I have a friend who’s a friend of Sean Baker. I am not sure if I should share too much details about his next film, but if you follow him on Twitter, it’s related to his extended stay in Toronto last year.
Top

The Elegant Dandy Fop wrote: ↑
Mon May 18, 2020 10:29 pm
I have a friend who’s a friend of Sean Baker. I am not sure if I should share too much details about his next film, but if you follow him on Twitter, it’s related to his extended stay in Toronto last year.

Fingers crossed for a remake of Canadian Bacon told from the bewildered Canadian point of view.
Top

It seems like Baker's next film, titled Red Rocket, is close to wrapping production. Described as a "dark comedy" without any other plot details, it will star Simon Rex from the Scary Movie franchise, and was shot by Drew Daniels, whose work on Waves (and Euphoria, get excited Never Cursed!) is unparalleled talent in recent memory.
Top

I was a gay male teenager in the nineties, so this is not what I remember Simon Rex from...
Top 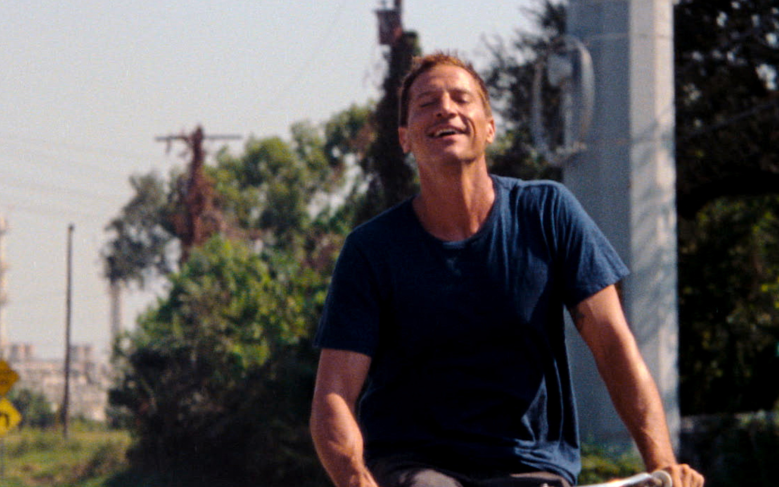 Red Rocket is a darkly comedic film about Mikey Saber, a 39-year old ‘suitcase pimp.’ That is the kind of pimp who lives off of women in the adult film industry. Finding himself down and out in Los Angeles, Mikey decides to crawl back to his hometown of Texas City, Texas, where his estranged wife and mother-in-law are living. Just as this dysfunctional family seems to be making things work, Mikey meets a young woman named Strawberry working the cash register at a local doughnut shop. He falls right back into his old habits.

Per the Cannes website, Red Rocket is apparently 128 minutes (somehow, the new Gaspar Noe is longer, at 135!).
Top

That poster makes it look like an 80s dorm room sex comedy.

Red Rocket continues Baker's preoccupation with the value of delusion, taking the concept from heartfelt innocuous roots in the final scene of Starlet, and a more stomach-churning bifurcation between a resilient but harmful mother throughout the narrative and innocent daughter at the end in The Florida Project, and planting us into impoverished Texas on the cusp of Trump's America, a valley of delusion not only Simon Rex, but all characters utilize, out of necessity to stay psychologically afloat.
SpoilerShow
Lil asks prematurely if Mikey will commit to her daughter. She needs to ask and put her trust into him, not to seal any palpable oath but for her own mental wellbeing, even if deep down she knows no one can or should trust the answer. She's powerless but executes her will in the only compromised fashion she can muster, before turning around and going back into the distractions of television. Lonnie convinces himself that he and Mikey have a genuine, meaningful relationship. He lies about being in the service to get by economically, but his self-deception runs deeper, lying to the police to protect a fantasy of a friendship and all that means to him. Lexi offers the same around retaining custody of her child. Strawberry is naive too, though it’s significantly not just a developmentally youthful naïveté Baker is interested in exploring, but a ubiquitous need of individuals to protect themselves from the hardships of their isolated existences via placing faith in another human being or larger systems, forging meaningless social contracts that nevertheless have merit in one's myopic drive to hope and dream.

To Baker, hopes and dreams may be objectively fruitless, but he also believes that these are subjectively meaningful currencies for ourselves. He has empathy for the dreamers, for those who delude themselves. Sometimes they're better than reality, and creating one's own reality can be both destructive and constructive in providing psychological self-preservation. Morality cannot be ignored, and Baker recognizes and appreciates the immoral behavior occurring in his narrative, but he also posits that perhaps morality is a privilege. It's impossible to tell whether Mikey sized Strawberry up as a commodity from the first moment he saw her or whether it developed that way, and it's impossible to tell how much of Mikey's apparent agony is due to his conscience vs self presentation during the long scenes of him waiting around to learn the outcome of Lonnie's questioning. Is it possibly both?

I believe it's very possible that Mikey and Strawberry are involved in a bizarre love story, where love and manipulation can be mutually exclusive. Their romance has as much value as any other. It's a contractual relationship, full of selfish motives, and yet reciprocally unified. Is Mikey in love with her, or the idea of her? Is Strawberry in love with him, or the idea of him? What is authenticity- selfless affection without contractual expectations or desires for self-gain? Couldn't the idea of that itself be a delusion? If so, perhaps their love is not only authentic, but more authentic and less delusional than the average relationship in some respects, while obviously heavier-leaning against the grain in others.

Baker understands (and by setting his film where and when he does, clarifies this reality) that people using people is human nature, reinforced by a milieu of capitalist individualism. It's a "me and mine" world for many of the Have Nots, and so the behavior we witness may disturb more financially comfortable and philosophically-versed audiences, but even the Haves engage in contractual relationships with others, and may not want to face their selfish desires as part of those unions, but they're there. I think Mikey has a conscience, and buries it out of personal necessity and personal history of solitary social climbing and painting a preferred narrative of a valuable identity, which is a strength as much as it is a moral cavity. His self-protection stretches from conscious and subconscious activity to get out of the fatalistic pit he's found himself in physically and psychologically, all the way to (dare I say, on some level, 'understandably'?) saving his hide from being complicit in a horrific accident he deserves part of the blame for causing.

Rex's Mikey notably has imperfections, but the subtler demonstrations of his character toe the line between stupidity and vulnerability. Mikey forces Strawberry to, and he himself aggressively stands up to her kinda-sorta boyfriend with faux-machismo, however when the time comes to get outta Dodge, Mikey shyly and pathetically tells Lexi the truth. It's an honest action, previewing his exit and facing the dysphoric consequences he absolutely expects, and I was shocked at how uncharacteristic the act appeared from a person I expected to sneak out in the morning to escape a confrontation against his interest (could this signify that perhaps Mikey's interests are more complex, involving a conscience of sorts?). Of course, the action winds up being stupid and leads to the ruin of his entire chest of resources, from accumulated monetary gains to his pride. The very notion that stupidity could be so closely related to, or even synonymous with vulnerability, is an uncomfortably sober exhibit of why the Mikeys of the world treat their relationships with their social environment and the world at large as opportunities to capitalize deceptively out of self-interest.

My favorite moments in the film are between Mikey and the dog. The dog cannot be used, abused, manipulated or talk back as a vehicle of material for Mikey to formulate a narrative and distract himself away from an attack. The dog offers no distraction. At first Mikey talks to the dog about how great things are, his head in the clouds, on his way out the door and onto another scheme. However, in the final act there are multiple instances where Mikey looks at the dog after spewing delusional verbage, and as a pitstop on his way to yet another distraction he looks the dog in the eyes and must shamefully sit with his own thoughts, feelings, and the reality of his self-image. Though just as he looks away from the dog and carries on, he will continue on in the end. The final music cue at the end is "Bye Bye Bye" backwards.. an artificial manipulation of a real song, emulating Mikey's own artificial manipulation of a real situation... transforming the alienating lyrics his wife just uttered in his face into a self-fulfilling prophecy of “I have arrived.” It may be delusional, but it's not untrue, and thus becomes a strange form of empowerment by displacing illusions into reality, and making it so. Yet again, Baker's characters choose the fantasy. After what we've seen, why not? It has as much subjective value, or more, than reality does- at least in the short term to Mikey's resilient defense mechanisms, and the tragically slim tools he has available to cultivate a meaningful identity for himself. He will survive, and the primary question is not a critical, antisocial 'at what cost?' sneer, but for us to segregate morality from empathy and treat the tougher of the two- the latter- without conditions as we pity and affirm Mikey's worth, meeting him where he's at. He can be pathetic, an agent of irredeemable harm, irrepressibly adaptable towards perseverance, and, just maybe, as capable of engaging in a version of authentic love as any of us.
I'll have to process this one for a while, but I think it may be Baker's best film yet. It's certainly his most morally-grey (it's not for those who cannot separate personal morality from humanistic empathy for, and curiosity toward the dignity and worth of all, but Baker's films never are!), and if the audience can meet the film on the unsettling ground it walks, the rewards will be limitless. In a just world, Simon Rex and Suzanna Son would both take home Oscars.
Top

Can Baker shoot in 16mm from now on? This film is absolutely gorgeous.
Top

Easily the most beautifully-shot film of the year so far, appropriately coating what could otherwise be unfairly diagnosed as a rigidly-immoral narrative framed with muted colors in the wrong hands with a glossy sheen of sober possibility instead, morphing the bifurcated focus on subjective delusion and objective peripheries of true overlooked substance in experience, and perversely dignified social-cultural context, together. Perfectly suited for a grey ambiguous nonjudgmental masterwork that meets the judged with humanistic empathy and curiosity on a level playing field.
Top

Interesting article incorporating bits of interview with Simon Rex about his life, career, philosophy, and personal development, in the wake of this potential comeback
Top
Post Reply
19 posts • Page 1 of 1