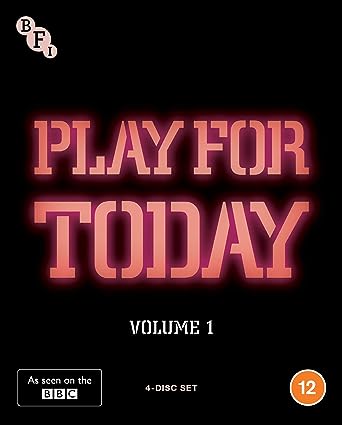 50 years on from its first transmission, the BBC's Play for Today anthology series remains one of British Television's most influential and celebrated achievements. Between 1970 and 1984, plays which combined some of the era's finest writing, acting and directing talents were broadcast direct to living rooms, regularly challenging viewers and pushing the boundaries of the TV drama.

Featuring plays by the likes of Ingmar Bergman, Julia Jones and Colin Welland and featuring a roster of eminent British actors, Play for Today: Volume One brings together seven iconic dramas on Blu-ray for the very first time, in a collection that exemplifies the breadth and brilliance of this groundbreaking series.

The set includes five plays which have been restored from the original negatives held in the BBC archive.


Exciting; had no idea PFT tackled an Ingmar Bergman play. Is this the first time on DVD/blu-ray for these plays?
Top

I'm particularly excited to see A Photograph, which was John Bowen's return to horror after the superb Robin Redbreast.
Top

Really excited about this as I've only seen a couple of these (and then only in extremely poor quality). I'm curious about
Back of Beyond as Rachel Roberts appears in a leading part.
Top

God, these are going to be amazing. I hope I can finally see stuff like Trevor Griffiths' "Comedians" in a watchable quality.
Its successor series Screen One also had some incredible stuff that is frustratingly elusive outside of archives like the BFI itself
and the Museum of Television and Radio in the States.
Top

Also, I wonder if Z for Zachariah, one of the very last ones, can be part of these sets, as it was re-adapted by Hollywood.
Top

This is such a rich field to be ploughed I've been waiting years for a comprehensive release of this series.
Top

Calvin wrote: ↑
Thu Jul 23, 2020 11:18 am
I'm particularly excited to see A Photograph, which was John Bowen's return to horror after the superb Robin Redbreast.

A Photograph is fantastic; a really unsettling reckoning with the past- much like Robin Redbreast. I saw it a few years ago in ropey shape with a burned-in timecode, so looking forward to revisiting it in better quality.
Top

But the train sets don't have insanely complex rights clearance challenges on a per-work basis - in virtually all cases, the BFI owns them outright.
Top

Relax. I was just goofing off.
Top

MichaelB wrote: ↑
Thu Jul 23, 2020 2:16 pm
But the train sets don't have insanely complex rights clearance challenges on a per-work basis - in virtually all cases, the BFI owns them outright.

Is there any weight to the argument that given the political gun held to the BBC's head at present more of its assets may become more readily available or are the rights more complex beyond the BBC's negotiating capability ?
Top

I hope Ghost Stories for Christmas gets a similar treatment. Next year is the series' 50th anniversary, so maybe...

But this is fantastic, too.
Top

Fifty years after its first transmission, the BBC’s Play for Today anthology series remains one of British television’s most influential achievements. Between 1970 and 1984, it brought the UK’s best writing, acting and directing talents into our living rooms, challenging audiences and pushing the boundaries of TV drama. Play for Today Volume 1, released by the BFI on 26 October, brings together seven iconic feature-length dramas from 1970-1977 on Blu-ray for the first time, in a collection that exemplifies the breadth and brilliance of this ground-breaking strand. Amongst other celebratory activity will be a season at BFI Southbank during October and November. The plays in the box set are as follows:

The Lie
Written by Ingmar Bergman | Directed by Alan Bridges | 1970
The great Ingmar Bergman’s first British teleplay foreshadows his better-known miniseries Scenes From a Marriage in its characteristic examination of a disintegrating relationship.

Shakespeare or Bust
Written by Peter Terson | Directed by Brian Parker | 1973
Brian Glover (Kes) features as Bard-loving miner Art, who, along with mates Ern and Abe, make a poignant, comedic canal-boat pilgrimage to Stratford-upon-Avon in a wistful waterways road movie.

Back of Beyond
Written by Julia Jones | Directed by Desmond Davis | 1974
Desmond Davis, whose career spanned Girl With Green Eyes to Clash of the Titans, directs This Sporting Life’s Rachel Roberts as reclusive widow Olwen, befriended by papergirl Rachel with momentous consequences.

Your Man From Six Counties
Written by Colin Welland | Directed by Barry Davis | 1976
From the writer of Yanks and Chariots of Fire comes a tale of the Troubles as, after his father’s death, Belfast boy Jimmy heads for his uncle’s farm. But even in Ireland’s far west, his new start is under threat.

Our Flesh and Blood
Written by Mike Stott | Directed by Pedr James | 1977
Alison Steadman (Abigail’s Party) is set on a ‘natural’ birth while leading her husband (Bernard Hill, Boys From the Blackstuff) against an officious establishment in the satirical shape of Richard Briers’ (The Good Life) Mr Smythe.

A Photograph
Written by John Bowen | Directed by John Glenister | 1977
When an inexplicable photograph arrives in the post, Michael Otway’s world is turned upside down. John Stride (The Ice House) and Stephanie Turner (Juliet Bravo) star in what the Daily Mail called ‘grand guignol in the British manner’.