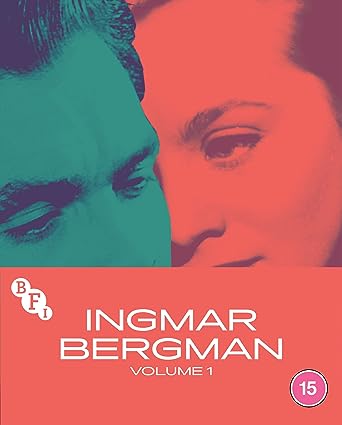 For over 50 years, Ingmar Bergman produced ground-breaking works of cinema that established him as one of the world's most acclaimed, enduring and influential filmmakers.

Ingmar Bergman: Volume One marks the first of a four volume celebration of the auteur's work – available on Blu-ray for the first time in the UK – and reflects on the opening stages of Bergman's career.

Presented over 5 discs, the set features 2K restorations of eight early written or directed by Bergman. Including initial partnerships with regular collaborators (such as cinematographer Gunnar Fischer and actor Birger Malmsten), these early works exhibit his burgeoning talents, introducing themes and tones that he would continue to develop over the next five decades.

Whoops, I thought I had them posted. It is Torment, Crisis , Eva , Music in Darkness, Port of Call, Prison , Three Strange Loves, and To Joy.
Top

Nice to see Torment (goodbye Eclipse Series 1!). Eva, Music in Darkness and Prison are also new to Blu-ray. The other 4 are already in Ingmar Bergman Cinema.
Top

Nice, not a bad set when we can get the four remaining early Bergman Tartan DVDs upgraded
Top

Damn, and of course I had just ordered Prison on dvd to buffer the Berman cinema set. (I had a rip of it.)

Why wasn't It Rains on Our Love included? Different studio?
Top

Prison is such a major work and I really missed it in the Criterion box, so this is wonderful news.
Top

4 not-on-blu Bergmans is value enough for me. Sold!

Will be interesting to see what the make-up of the other three volumes are.
Top

BFI website will only be selling this to UK customers (and related territories). Hopefully it will be available from other retailers.
Top

So Bergman's filmography (as director) will be nearly complete on blu. Minus the following.

Does anyone know where I can find a copy in any region of Bergman's complete Face to Face?
Top

I thought Face to Face was with Paramount but according to Park Circus the rights are with StudioCanal...so ball's in their court.
Top

EddieLarkin wrote: ↑
Thu Apr 29, 2021 9:01 am
Nice to see Torment (goodbye Eclipse Series 1!). Eva, Music in Darkness and Prison are also new to Blu-ray. The other 4 are already in Ingmar Bergman Cinema.

Happily, three of them are not merely good films but a distinct cut above the other 1940s titles in the Criterion box. The fact that Torment, Eva and Prison are original Bergman screenplays makes a substantial difference - and, by his own cheerful admission, he wasn't an experienced enough director to do his own writing full justice at the time, whereas Alf Sjöberg (Torment) and Gustaf Molander (Eva) clearly were. And Prison is fascinating as his first full-blown auteur film (it's probably the most glaring omission from the Criterion box), although Bergman wasn't the least bit blind to its shortcomings - frankly, he bit off far more than he could comfortably chew given the restricted budget and schedule and what was still comparative inexperience, but the first few minutes rank alongside pretty much anything else that he ever did.

As for Music in Darkness... well, Bergman had to pay the rent somehow, and in fact he took on that project (a pretty glutinous melodramatic weepie about a musician struck blind after trying to rescue a cute ickle puppy that had foolishly wandered onto a firing range) specifically to atone for previous commercial failures. For someone so often painted as the archetypal aloof and distant artist, Bergman was in fact acutely conscious of the risks that his producers were taking on his behalf, and felt obliged to repay them somehow.
Top

I wouldn't argue for Music in the Darkness as high art, but it's more entertaining than many of his other earlier films released by Criterion and subsequently included in this set. But no argument from me on Eva and Prison being the high points here. Plus, Godard is absolutely obsessed with one of the stills from Prison-- has anything been more consistently referenced in Godard's essay films than the image of the two leads with a camera?
Top

Plus it contains that essential, meaning-rich devil-and-skeleton (death) film-within-the-film that Bergman quotes again in Persona.
Top

Might be tangentially worth mentioning if some are unaware: the BFI's first Play for Today box includes the Bergman-scripted The Lie
Top

This Can't Happen Here (probably will never see this anywhere, Bergman having disowned the film)

You never know. It was restored for his centenery and received some theatrical screenings so I'd be surprised if Svensk Filmindustri played hard ball with it.
Top

Does anyone know where I can find a copy in any region of Bergman's complete Face to Face?

To date the only release I'm aware of is the DVD that Olive Films put out a while back. It's the theatrical
version, though thankfully it has the original Swedish soundtrack rather than the very poor English dub. That
being said, the audio quality is not exactly stellar, but it's probably the only way of seeing it at present.
Top

Bergman’s contribution, Daniel, is on the Fårö disc of IBC
Top

I'm not so crazy about the early films (and already have the two of this lot that I like best, Prison and Music in Darkness, on DVD, and am not that desperate to get them on blu-ray), but I'm nonetheless really excited by this project and interested to see where it goes in subsequent volumes. Hopefully we finally get a decent edition of Face to Face, as well as some of the '80s/'90s TV movies and other stuff that didn't make it on to the Criterion set.
Top

I wouldn’t hold your breath - there’ve already been strong hints that the other boxes will be all Svensk Filmindustri affairs. Basically, what was released in the old Tartan DVD box.
Top

I’ll be very happy to pick this up and complement the CC set at £30 or so. BFI sets usually drop to a very inviting price.
Top

For more than 50 years, Ingmar Bergman (1918-2007) produced groundbreaking works of cinema that established him as one of the world’s most acclaimed, enduring and influential filmmakers. Ingmar Bergman: Volume 1, released by the BFI on 26 July 2021, is the first of a four-volume celebration of the auteur’s work – available on Blu-ray for the first time in the UK – and reflects on the opening stages of Bergman’s career.

Presented over five discs, this beautifully packaged box set features 2K restorations of eight early films (1944-1950) written or directed by Bergman, including initial partnerships with regular collaborators such as cinematographer Gunnar Fischer and actor Birger Malmsten. These early works exhibit his burgeoning talents, introducing themes and tones that he would continue to develop over the following five decades. The discs are packaged with a 100-page perfect bound book and contain additional special features, details below. The films in Volume 1 are: