Discuss DVDs and Blu-rays released from Arrow and the films on them.
Forum rules
Post Reply
8 posts • Page 1 of 1
Message
Author 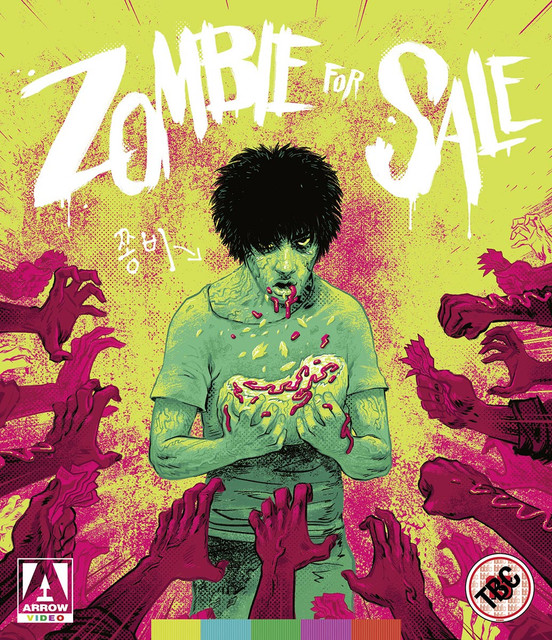 An infectiously funny slice of modern Korean cinema where Train to Busan, The Quiet Family and Warm Bodies collide to create a memorable rom-zom-com from first time director Lee Min-jae.

When the illegal human experiments of Korea’s biggest Pharmaceutical company go wrong, one of their “undead” test subjects escapes and ends up in a shabby gas station owned by the Park family – a band of misfits spanning three generations who hustle passers-by to make ends meet. When the Park family uncover their undead visitor, he bites the head of their household, who instead of transforming into an undead ghoul becomes revitalised and full of life! The family then hatch a plan to exploit this unexpected fountain of youth, allowing locals to pay to be bitten too, until things go wrong…

With a cabbage-munching zombie who prefers ketchup over blood, and a dysfunctional family that gives the Kim family of Parasite a run for their money, Zombie for Sale will warm the deadest of hearts and breathe some new life into the zombie genre.

This felt like a lot of other dysfunctional Korean family vs. monster films, but it was well-executed, fitfully funny and had more than enough good ideas for its runtime. Worth a punt.

Hidden within the film is an idea I've long thought would be interesting for a zombie film to explore. (They don't really do so here, unfortunately.)
SpoilerShow
What are the moral implications of killing a whole lot of zombies when it turns out that "zombism" is just a virus that can be cured / one can recover from?
Top

zedz, I seem to remember there being a short segment in the ABCs of Death 2 film ("O is for Ochlocracy") that tackles just that subject, with the heroine going on trial for her blithe zombie shooting spree in a world where it unfortunately(?) turns out that people have been able to have been cured of being a zombie, and come back from the dead bearing a grudge! It runs out of steam a little before the end (mostly because as that title implies its sympathies appear to lie more with the 'wronged', albeit over enthusiastic, protagonist and its all a bit of a blunt political metaphor with a 'wacky' underscore), but it was an amusing initial idea at least!
Top

I was the same with the V/H/S sequels!

If you want my run down with recommendations of the films, I wrote up ABCs of Death and ABCs of Death 2 a while back. They are extremely variable in tone and content (the first features much more extreme content than the second) as with any anthology but there are a lot of high points and interesting directors peppered throughout (Bill Plympton, Vincenzo Natali, Ben Wheatley for example)

The short version: I think that O is the best short of the first anthology and K is the best from the second anthology.
Top

I don’t know if you changed that, but V/H/S/2 is actually really good, and consistent. V/H/S: Viral has two great segments from Nacho Vigalondo and Aaron Moorhead & Justin Benson, but the rest of it is back down to the original film’s ‘quality’ level.

zedz, I’m fairly sure I’ve seen as least one zombie feature film involving that idea (can’t figure out what it might’ve been though, unfortunately), but more often than not it’s more of a what if? that only crops up fleetingly.

Almost up to watching Zombie For Sale; looking forward to it.
Top

Warm Bodies also touches on it although not terribly in-depth.
Top

zedz wrote: ↑
Sun May 16, 2021 6:06 pm
This felt like a lot of other dysfunctional Korean family vs. monster films, but it was well-executed, fitfully funny and had more than enough good ideas for its runtime. Worth a punt.

Hidden within the film is an idea I've long thought would be interesting for a zombie film to explore. (They don't really do so here, unfortunately.)
SpoilerShow
What are the moral implications of killing a whole lot of zombies when it turns out that "zombism" is just a virus that can be cured / one can recover from?

There are a film and a tv series which explored a post-zombie apocalypse world were the zombies regain their humanity and have to be reintegrated into society. The less interesting one was the 2017 Irish horror film The Cured, which has largely faded from my memory. The better take was the BBC series In the Flesh about a rehabilitated zombie suffering from PDS (Partially Diseased Syndrome), trying to resume his former life. He deals with trauma, as he remembers everybody he killed while being a zombie and the former zombies become a discriminated against minority which gives rise to populist politics. It was one of the more original takes on the zombie genre and is worth checking out, despite having been cancelled after two seasons. There also was The Girl with All The Gifts, which deals with the morality of killing zombies when they may be
SpoilerShow
our next evolutionary step.
Though based on a different novel, its closer to the spirit of Matheson's I Am Legend than any of the three official adaptations.

Zombie for Sale or The Odd Family: Zombie for Sale, which is the awkward title it had when I watched it, tries very hard to be a Bong-Joon ho film. While there always is something to like or admire about his misfit, working class families, I found the family here cartoonish and unlikeable. This was just about watchable but it's among the weaker of the recent Korean zombie films I've seen.
Top
Post Reply
8 posts • Page 1 of 1