Well, Universal has been named, but have they fuelled any TT releases?
Top

Is Gun Fury something that Indicator could release? I see it's a Columbia title.
there are fewer than 50 copies remaining in TT (i wouldn't expect it so for such a recent release!!!). (i guess it's because it's 3d? I think many people buy 3d regardless of the film, just for the sake of it)

And I'm torn now. I would prefer an indicator release, if there is the possibility.
Top

Anyone know from which film is this clue for next batch? 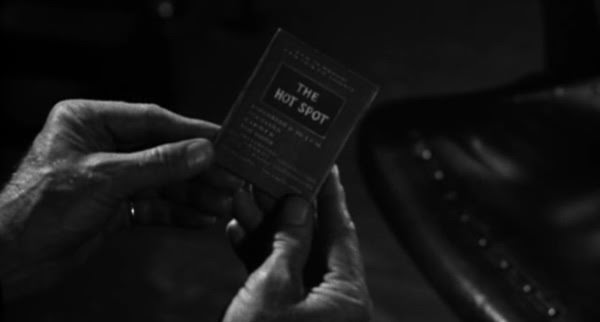 Any reason why it's not Dennis Hopper's Hot Spot?
Top

NABOB OF NOWHERE wrote:Any reason why it's not Dennis Hopper's Hot Spot?

Several glaringly obvious ones, starting with the fact that The Hot Spot is in colour.
Top

I assume that film's title is a reference to like a nightclub or something in an old noir but I'm not finding anything on that front.
Top

NABOB OF NOWHERE wrote:Any reason why it's not Dennis Hopper's Hot Spot?

Several glaringly obvious ones, starting with the fact that The Hot Spot is in colour.

OK But before I go and stand in the corner with my Dunce cap on what are the others?
Top

The mob place in the '54 Dragnet film was called The Hot Spot, but that was colour too. I Wake Up Screaming was originally called Hot Spot, but it was a reference to the electric chair rather than anything specific in the picture.
Top

Costa wrote:Anyone know from which film is this clue for next batch?

Lady In The Lake?
Top

Films where a person meets or kidnaps someone and keeps him/her in captivity, a theme that might interest for the time being. After watching David Thompson’s video interview on Eureka’s disc of That Cold Day in the Park (1969) he mentioned The Collector (1965). Sorry if this has been discussed before but has Indicator any plans for the Wyler film?
Top

I think it's Sony, so they could
Top

The Collector was amongst a number of Columbia titles I enquired about when they first launched, but I never got a clear answer. It may have been one of the titles they signed later on, no doubt after several requests, but also may not be. What I've discovered recently is that there are dozens of titles that would seem second nature for Indicator to release, and when I've enquired about them they've been honest and said they don't have very many of them ('yet').

Since most of the titles I enquired about were ones with already competent masters - often newly restored by Grover Crisp's team, and released elsewhere (e.g. Twilight Time, Carlotta, Umbrella etc) - I assume either Sony are hanging onto them for whatever reason, or maybe other labels such as Eureka are setting up deals with Sony and they're signing the same sorts of titles. I know of at least one other UK label looking into a Sony deal right now, so we can't expect Indicator to get absolutely everything in the Columbia vaults, especially since they're starting to look further afield (e.g. Universal, possible upcoming MGM/Fox deal).

Anyway, I'm sure The Collector will probably show up via either Indicator or Eureka sometime in the next 12 months. Possibly even Arrow, if they want more on their plate (they're juggling enough as it is with MGM and Universal deals, and in-house restorations of their own to deal with).
Top

This is not really related to anything that Indicator could release (or probably have any interest in!), but on the theme of 'captivity films' perhaps the one I would most highly recommend (certainly the one that pushes to the extreme boundaries of that subgenre: its only a short hop from here to the grand guignol Guinea Pig films) is Yazuso Masumura's 1969 film Blind Beast (NSFW), with the blind sculptor kidnapping a model (with the help of his obliging, longsuffering mother!) to hold in his warehouse to help him sculpt giant parts of bodies. Its a very 'tactile' film, but also a darkly psychological one too with the strange turns that its storyline takes.
SpoilerShow
And it manages to tie in all of those abstracted body parts and the focus placed on touch instead of sight given primacy in an artwork into a beautifully twisted dismemberment climax that entirely elides blood and gore for the amputated body parts to just be 'cut off' by the edges of the cinemascope screen, with the remaining parts of the bodies highlighted against blackness
(Plus I've been curious for a while to revisit that 1981 film Tattoo with Bruce Dern and Maud Adams, though I remember it getting scathing reviews at the time!)
Top

I can certainly confirm that there are absolutely no plans for Indicator to move in that direction. I have the schedule for the next eighteen months, and the only film on it that comes close to being foreign-language is March’s The Passenger - which stars Jack Nicholson and is mostly in English.
Top

Totally understand if you can't say this at all, but just if you're in the spirit of confirming what Indicator isn't planning on branching into - there's no overlap with Sony/Columbia titles Criterion has already released in the US but not yet the UK, right? I don't imagine there would be, as it seems unlikely we'd have already gone through 18 months without one happening yet.
Top

Not that I can see. As you say, if the UK rights had been available, Criterion would most likely have snapped them up already, most likely prior to Indicator’s initial launch in autumn 2016.
Top

Isn't Criterion's UK venture basically in partnership with Sony? I'd imagine any Columbia titles Criterion have planned for North America would be automatically reserved for UK release as well, at least for the next year or two? In other words, even if Indicator - or any other UK label, for that matter - were to try and license something Criterion had already released from the Sony catalogue, or were planning to in the near future, wouldn't Sony simply turn them down since they would have a vested interest in that title? Of course, the only thing that could change that assumption was if Criterion released a Sony title in North America that Indicator had previously released over here; such as The Passenger, for example, which I had assumed would be released by Criterion at some point.
Top

Yes, but people on Blu-ray's forum lack that common sense and have been speculating about Anatomy of a Murder and other titles for months.

I'd actually imagine it goes both ways, to be honest, and should be an indication Criterion has no plans for the Passenger at the moment.
Top

Are we likely to see Walter Hill’s Geronimo from Indicator?

Isn’t it a Sony/Columbia title.

Re: Indications of Incoming Indicator Entertainments

Is there any shot at Gidget coming from Indicator?
Top

Re: Indications of Incoming Indicator Entertainments

Following the notable success of Indicator's excellent THE PASSENGER BR, two outstanding Antonioni films awaiting quality Bluray release anywhere remain IL GRIDO & ZABRISKIE POINT, and so may be worth their consideration for further releases. I recently saw some HD res footage from IL GRIDO at the current LA DOLCE VITTI exhibition in Rome... While a decent high res scan of ZABRISKIE POINT was created for the 2014 Hollywood Classics UK/Ireland theatrical rerelease of ZABRISKIE POINT on D-Cinema/DCP...
Top
Post Reply
624 posts